Saturday: The forecast hadn’t looked too good earlier in the week but as we discussed at length a forecast is just an educated (hopefully!) guess & as far as the sea goes often not even that!  Things didn’t look too bad for Saturday: Sun & Cloud with a high of 10 degrees getting a little rough later with Sunday warmer & calmer – we would see how this played out! 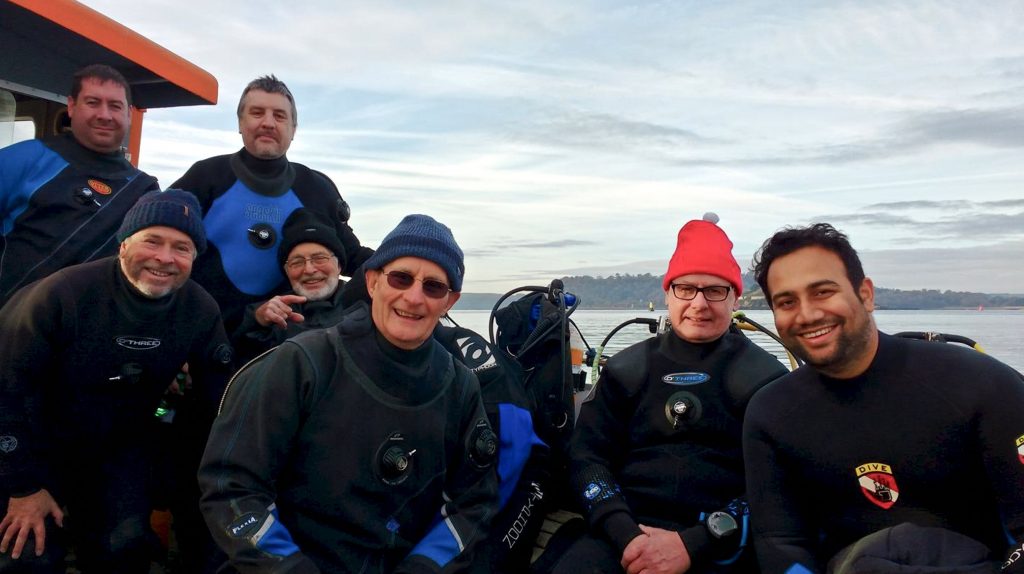 The valiant party (Chris L, Tim, Bob, Steve, Geoff, Chris H, Abhi & myself along with special guests Annie – a rebreather diver who joined us last year and John from another BSAC club down Reading way) gathered themselves & their kit outside the Mountbatten Centre and watched as TopGun made its way across the harbour to the pontoon. We then transferred ourselves onboard. Gary & deckhands Lewis and Ross were in fine form as we allocated spaces according to buddy pairing & kit. 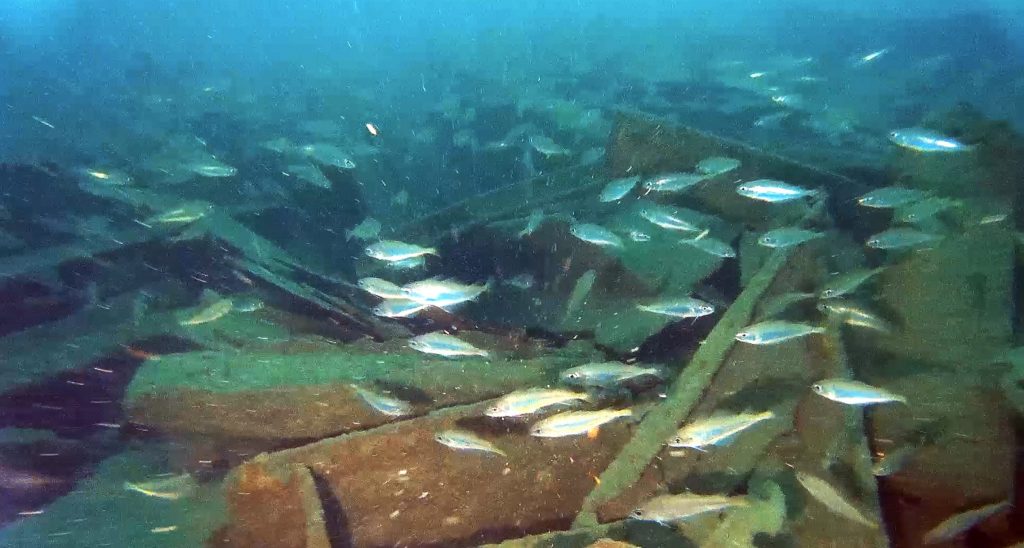 A boat brief & we were off to our first dive of the day: The Persier. As a club we’ve dived this a number of times before but she’s a pretty big wreck (122m) and as such there’s plenty to explore on repeat dives. Lying on her port side a lot of the wreck is collapsed but her boilers, a section of the bow & stern still stand proud. This time I saw parts of the wreck I hadn’t seen before, though visibility was often bad due to the swarms of bib & pollack weaving through the wreckage 🙂 while fan corals dotted its surface. 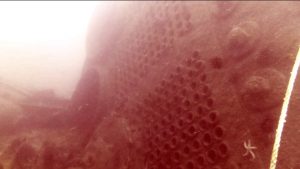 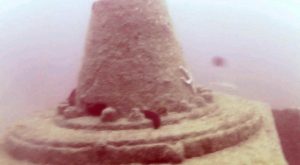 Cuckoo wrasse amongst the wreckage

The wind had kicked up as we headed back for our second dive of the day & created a fair swell so you had to watch you step!
The second dive of the day was the Glen Strathallan, a number of us passed on this one but 4 hardy souls braved the seas (13 degrees apparently) & came back with the usual tales of mermaids & sunken treasure, well at least 3 congers in the boilers and a crayfish in one of the tubes! 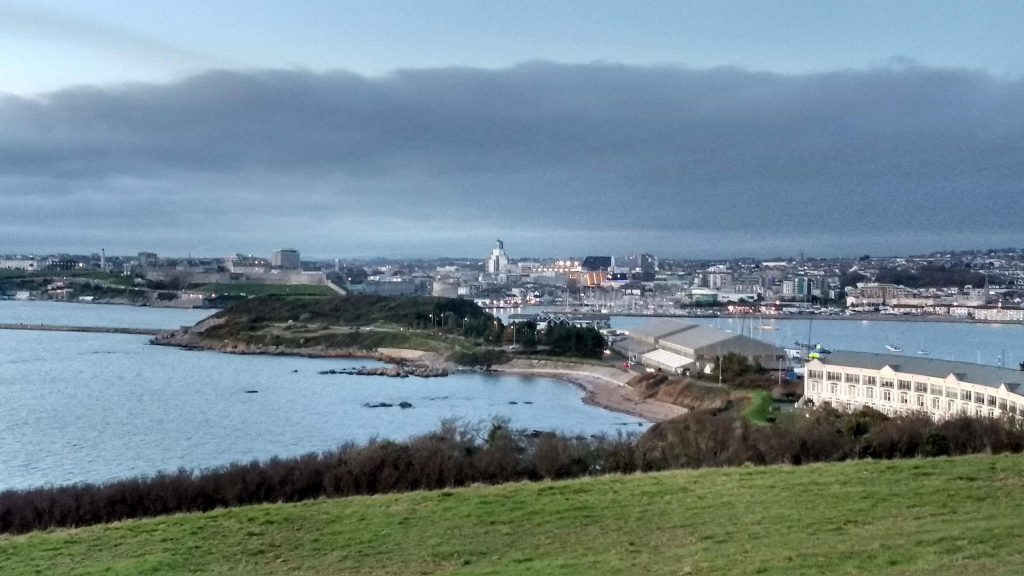 Plymouth towards Mountbatten & the city beyond

On our return to port we tidied ourselves up & a group of us embarked on a walk up to Jennycliff to take advantage of the most excellent weather & remaining daylight.
On their return we decided on a change to the tradition of eating in the Mountbatten hotel & instead took the convenient (& cheap) ferry across the harbour to Plymouth proper to sample its delights. It didn’t take long for us to find an establishment very much to our liking, the 42nd Street Grill & we tucked in to a massive supper – some of us would be needing less weight on the morrow! 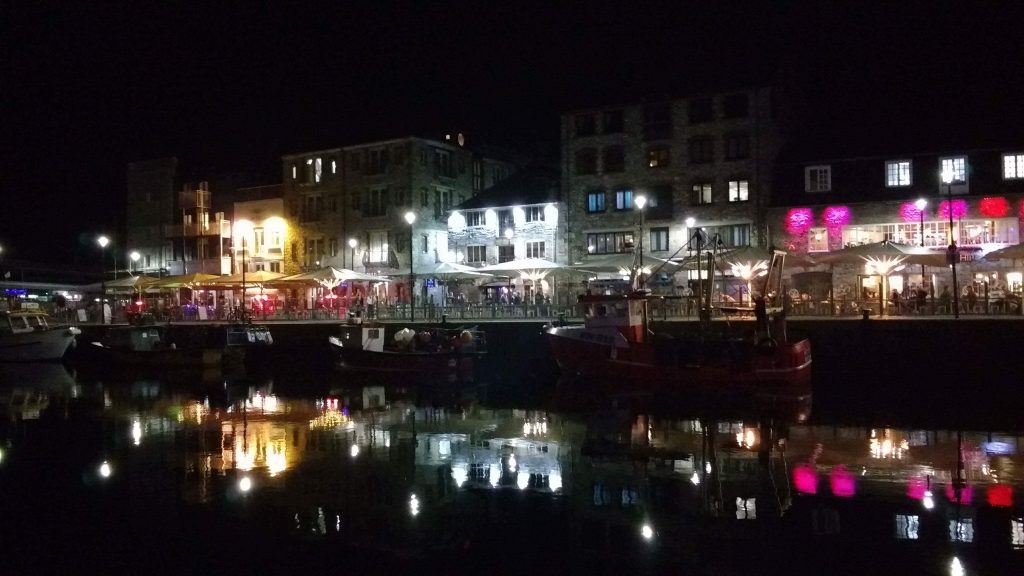 After a wander around Plymouth at night – very scenic, it was time for the ferry back. A couple of girls on the ferry revealed one of them had done a PADI course & within the blink of an eye Tim went into the joys of UK diving with BSAC & showing her photos of previous dives, TBH I think he may have convinced her, pity its’ not our club she’d be joining! 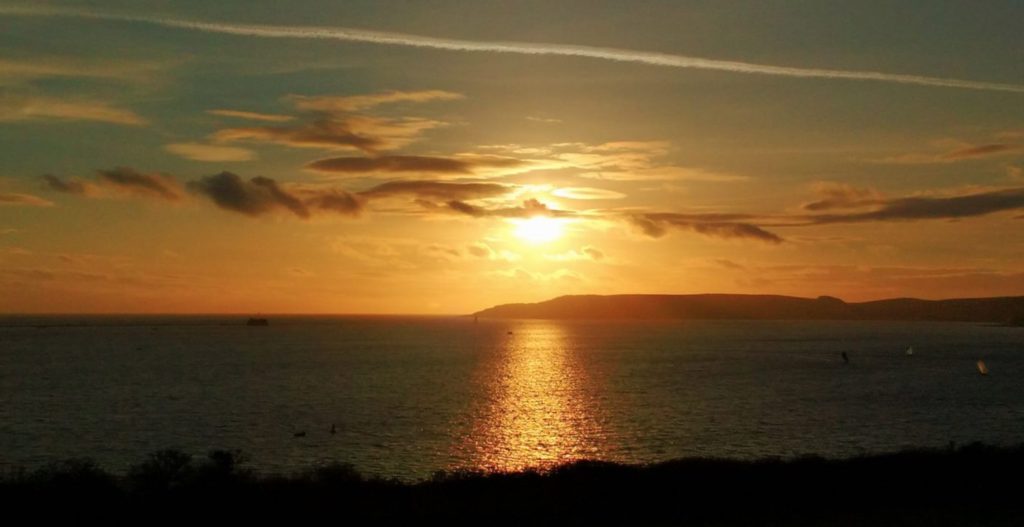 Sunset over Rame Head (from outside the Jennycliff cafe)

A nightcap in the Mountbatten hotel bar saw us catch up with our guest diver John who had up taken Garys’ offer of a night dive following the earlier dives & he regaled us with tales of the very different experience the breakwater was after dark!
Sunday: A good nights sleep in the Mountbatten – despite a wedding reception going on downstairs many of us went out like the proverbial candle and then moseyed on up to the bar for breakfast. Turns out we were the only group staying which meant breakfast was a disappointing cereal & toast affair rather than the full English many had been looking forward to – to be honest after the previous nights’ blowout I think cereal & toast was probably the wiser option 🙂

Flat calm seas bode well for the day ahead

Back to the boat with some new fills, Nitrox for the first dive & air for the second, we headed out just after 9am to see what the day would offer – inside the breakwater the sea was almost a mirror and it wasn’t that much different outside, a marked (welcome) contrast to Saturday 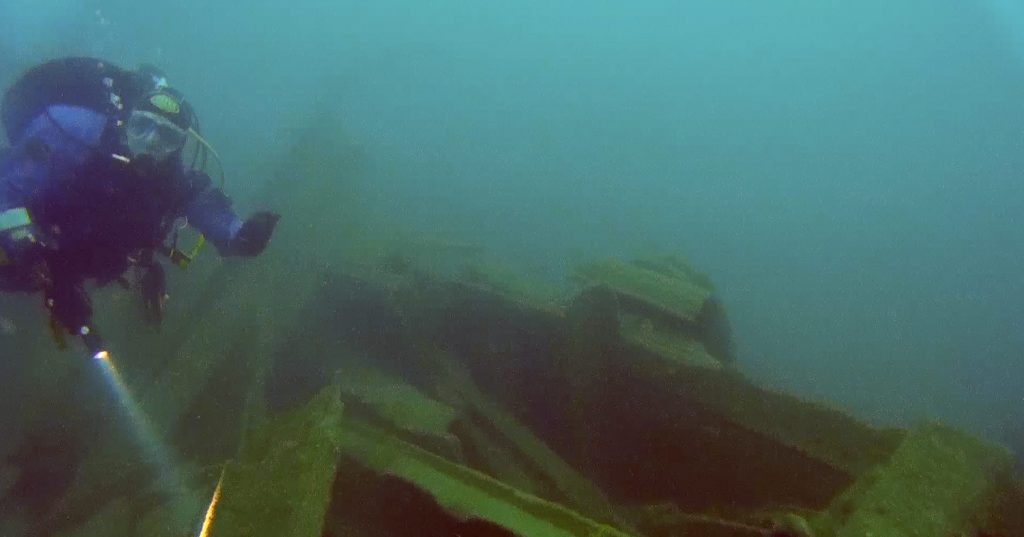 What it offered was the Rosehill, a wreck around 20 minutes further out than the diving standards of the James Eagan Layne & Scylla and new to a number of members on this trip. Chris & I duly jumped in & descended to another balmy 13 degree seabed covered in an awful lot of plate hiding plenty of crawfish. As we approached the boilers I had to admit they are seriously impressive & home to many congers, one of home was certainly not shy!. We followed the prop shaft back towards the stern to find a very impressive prop (not brass else we certainly wouldn’t have found it!) and rudder lying flat on the seabed. Even more so than the Persier this wreck was absolutely swarming with bib & pollack among other species.

On returning to the boat Tim indicated he had dived the wreck on two previous occasions & not been impressed but the 3rd time it seems was the charm – his best ever dive on the wreck Apparently there’s a gun down there, which we didn’t find but all agreed it was a wreck we’d definitely come back to & should considering it wasn’t much further than the JEL/Scylla, easily reachable by the club boats
A surface interval enabled Gary & Lewis to ply us with hot drinks, pasties, fruit & chocolate freddos and time to swap our cylinders to air for the second dive. 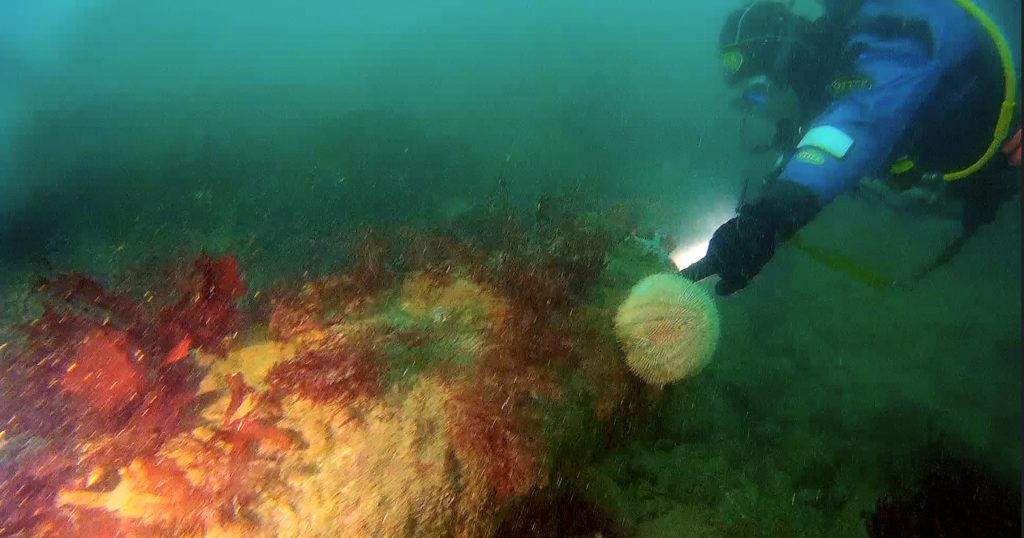 Chris examines the business end of one of the many cannon

Gary had sorted us out special permission to dive the Coronation, a protected wreck and so after a gentle chug back towards Plymouth we neared the location. This is a protected wreck  & as such the shot had to go down away from it so as not to cause damage. Equipped with laminated books identifying the various cannons & anchors & bearings of same of the wreck we duly submerged.  The scenery was not dissimilar to that around the Mewtsone with lots of rock outcroppings & gullies to hide things. A stark contrast in terms of life (the odd wrasse was spotted) Chris & I managed to find one of the very impressive cannons after being directed by other party members. Others returned with tales of finding cannons, anchors & a number of other sea denizens.
As a first for all in our group we agreed it is a dive worth repeating with more focus on navigation now we know what its like.
We headed back, unloaded & thanked Gary, Lewis & Ross (TopGun skipper & crew) for their efforts. A short detour to set the club RHIB up for a return to Bristol for the winter & a farewell to the rest of the party – Annie & John threatened to join us again next year! we hit the road
All in all a nice way to end the diving season with some new discoveries, new experiences & something to remember. through the winter months – Winter Warmer 2018 anyone? 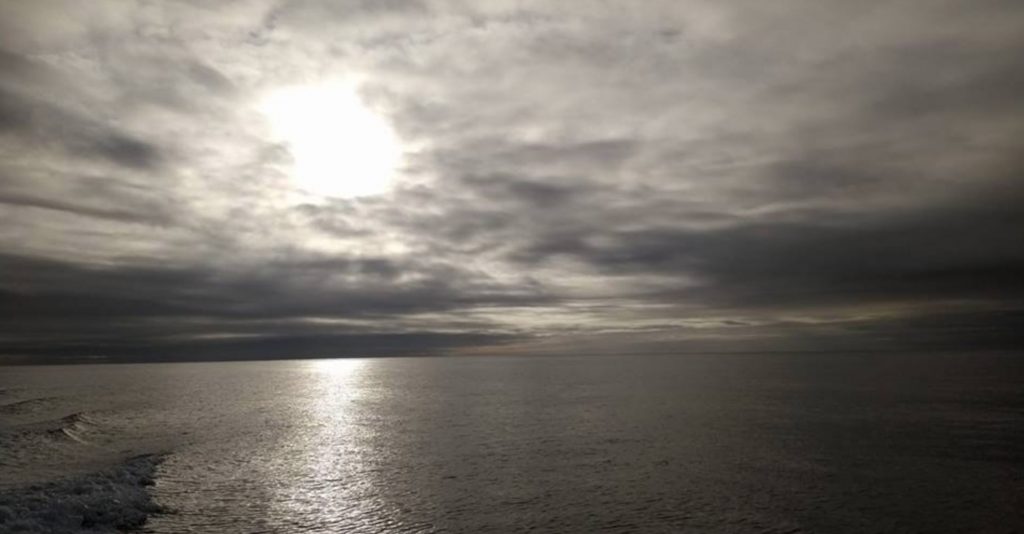