Vicki & I formed the advance party & after a 4 hours+ journey we set up the beachhead for our long weekend in deepest darkest Cornwall at Little Trevothan Caravan & Camping park. – A change from our usual haunt in the Prince of Wales (almost beer) garden but according to a few older members a site previously used when the club brought down the RHIB. I will say the park is very clean & tidy with modern toilets, showers & a friendly shop. We will likely be back!

Base-camp established – before the hordes 🙂

A previously prepared chilli finished the day nicely & only left us to marvel at the ability to clearly see the Milky Way with no light pollution in almost complete silence.
Friday involved a day excursion to Kynance Cove, last frequented with more children than i care to remember over 10 years ago – not too busy & cream teas at the cafe overlooking the aqua blue vistas was bliss. 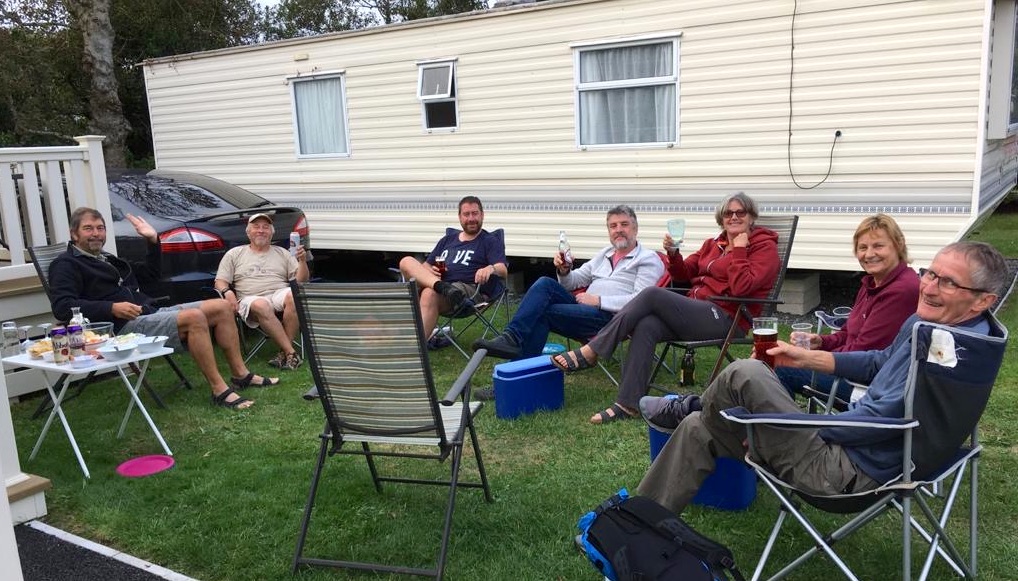 The rest of the party arrived (Tim, Chris, Geoff, Teresa, Neil & Kath), exchanged journey stories & pitched their tents & then it was off to Sue & Petes’ palatial static caravan for a very enjoyable evening of drinks & nibbles in a ring of appropriately socially distant chairs. 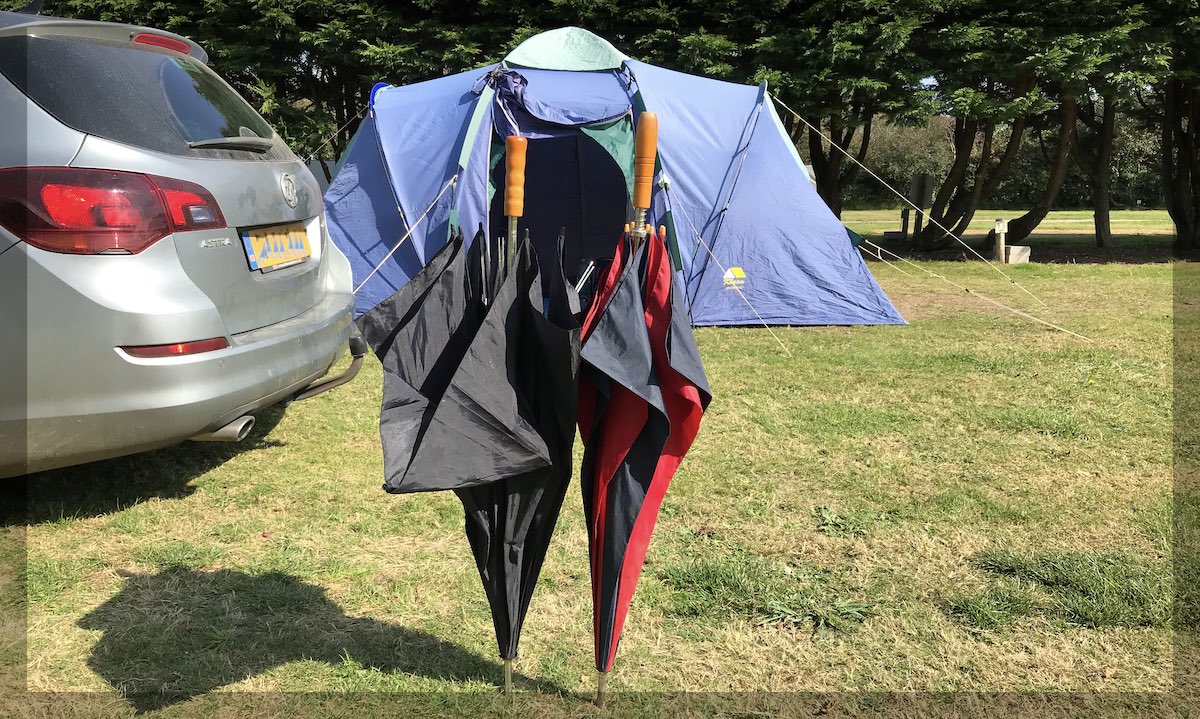 Not very optimistic some of our group!

Back to the van with Chris & Tim for a quick pasta meal Vicki whipped up & a chat about this, that & everything – helped by a few beers.
Saturday dawned with bright sunshine and it was time for the main event – diving with the able assistance of Porthkerris Divers!

We weren’t out until around 12 so when we arrived at Porthkerris it was reasonably busy but we all got decent spaces, parked up & chilled for a couple of hours.
Tim went for a refreshing swim & lent Vicki his float for her first time around the offshore reef – Drawna Rocks.

Then it was on with the rubber & onto the platform for the tractor to push us out to the incoming Celtic Cat, the larger of the two catamarans. Both boats were being run as shuttles with reduced capacity due to Covid & it was very roomy with only 6 of us aboard.

The skipper, Mark explained the drill & the options. Not having done much this year we opted for Raglan Reef to kick things off & it wasn’t long before the shot was in & so were we (Sue+Neil, Geoff+Tim, Chris+myself). We were advised once on the reef to head North-East – the reef is a pyramid with sides dropping to 50m on the North, East & South & 18 on the west where it joins the rest of the promontory. 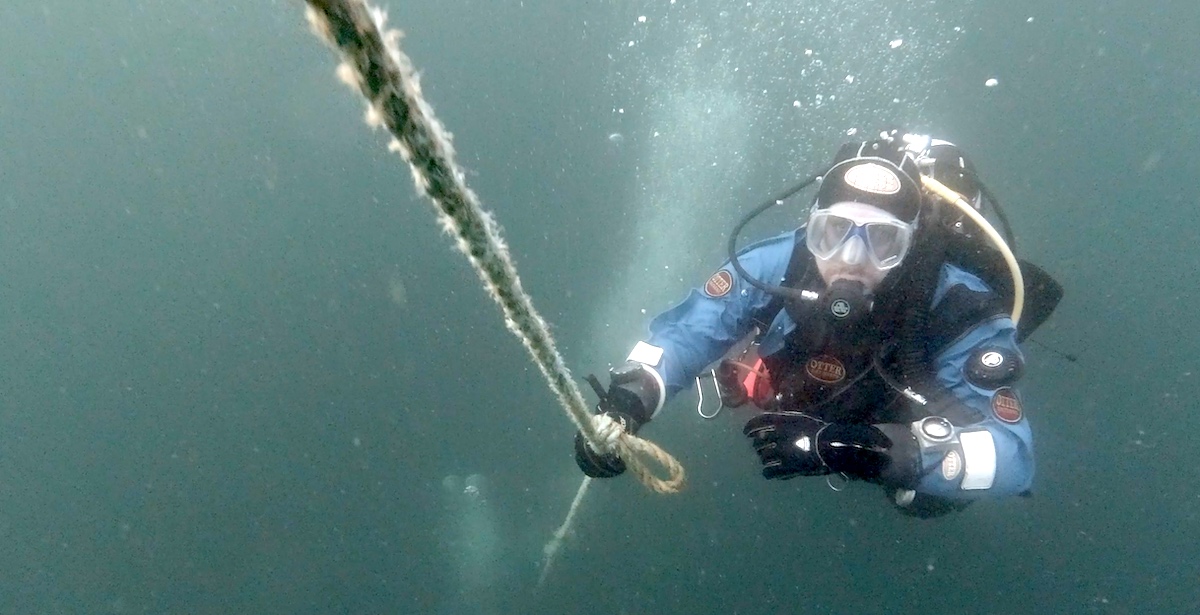 Visibility was around 8 metres with some detritus in the water. The reef was a series of huge rocks & cliffs covered with dead mans’ fingers, anemones & urchins & teaming with wrasse of various types.
With no deco at 4 mins we worked our way up & continued round the pyramid meeting Tim & Geoff twice before the depth meant kelp & we headed up. 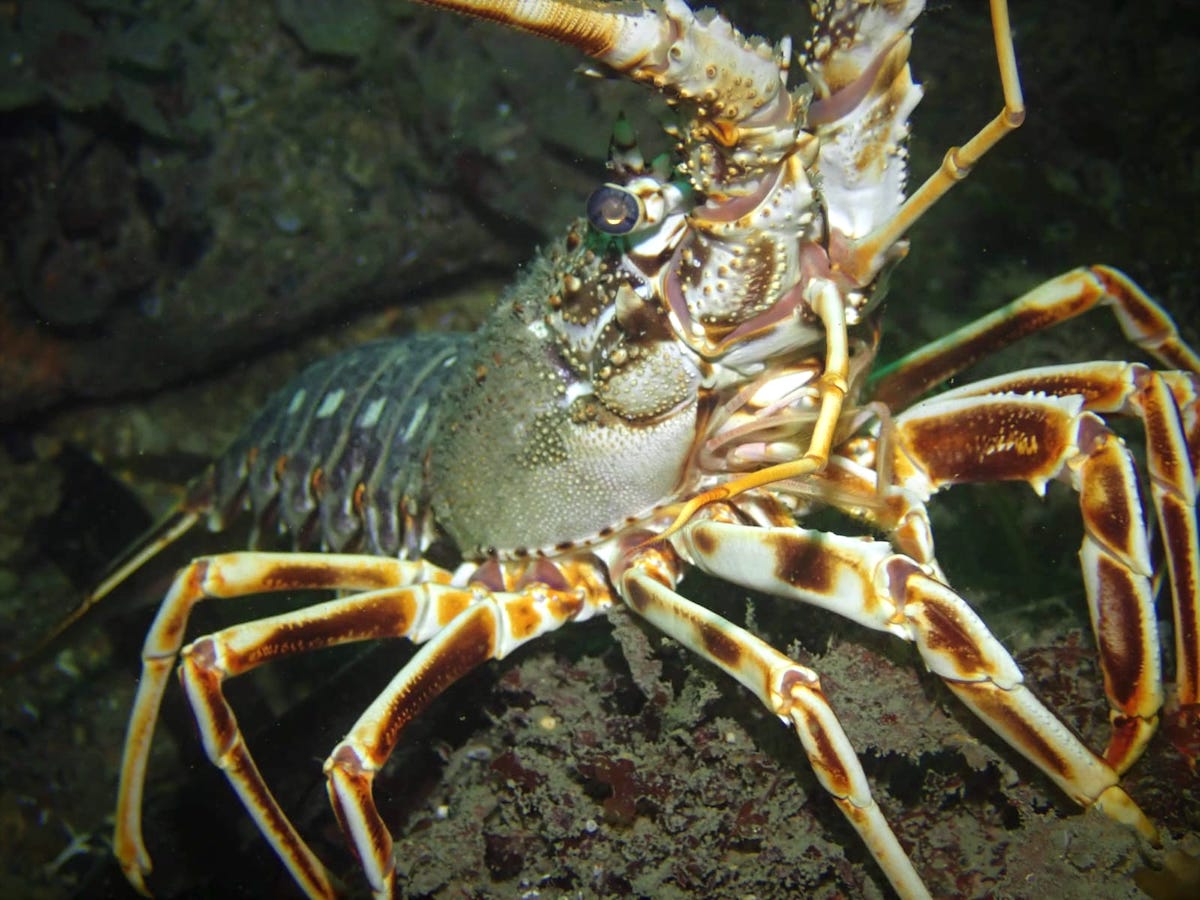 We were back at base in no time – the cat can certainly move! A halloumi & tomato roll & a cuppa sorted me out while Chris indicated the triple salad was a revelation. The veggie sausage roll was also appreciated by Tim
For the second dive Mark suggested the Spyridon Vagliano a small (600 ton) wreck lying west-east & if we wished we could then cross the reef to the larger Mohegan lying north-south – 3 dives in one! He was very relaxed saying there was no rush but we pointed out we had dinner reservations for 7:30 so he did the history of the ships in double quick time!
Chris & I opted for the triple & so it came to pass – ably navigated by Chris 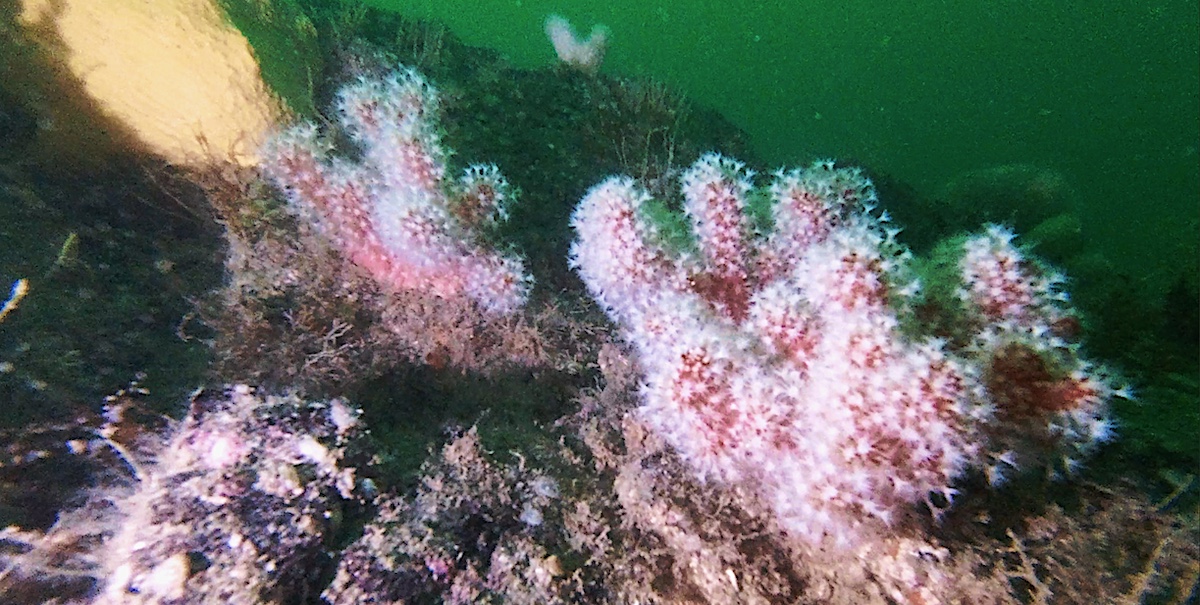 Again visibility was pretty good, in places better than the morning dive. The shot took us to the boilers of the Spyridon & we thoroughly explored those & the exposed tubes for wildlife. Then under the wreckage on the north where there was loads of life – the usual wrasse but also grumbly old spider crabs, then it was a scenic swim across the outstanding huge rocks & boulders of the reef to the Mohegan, hitting it dead centre with 3 huge boilers for a wreck of a whole different scale (the ship is about 10 times  bigger) with plenty of hidey holes to search for critters in. We circumnavigated the boilers a few times greeting spider crabs & wrasse before, with no deco reducing we moved up a little into the edge of the kelp but still with plenty to see with occasional rocky overhangs with purple anemones & a white and yellow profusion of dead mens’ fingers everywhere. 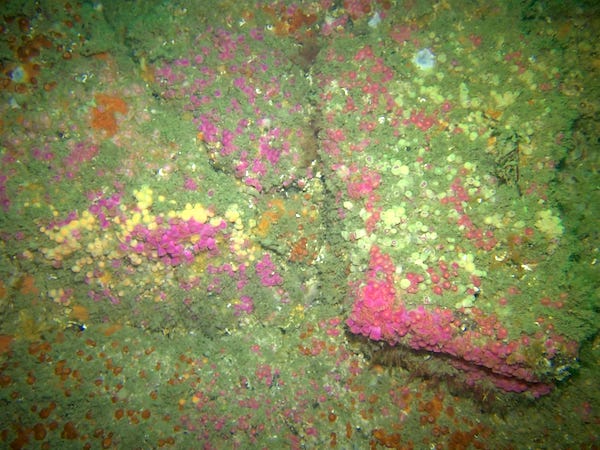 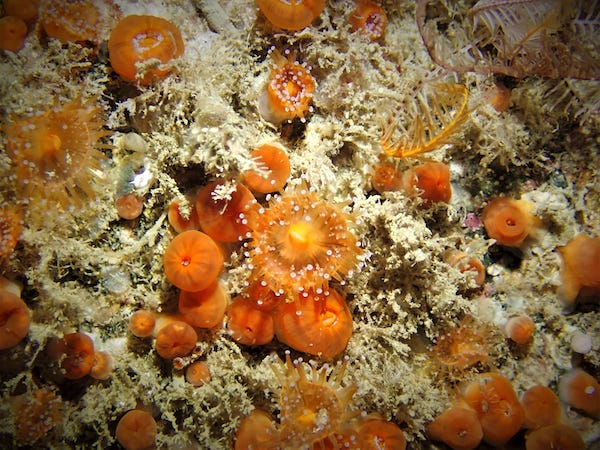 A cracking dive all told & the other party members, though not venturing across to the Mohegan agreed (we would do the Mohegan properly tomorrow).

Time was pressing – 6:15 now & we needed to be in St Keverne by 7:30 – it was going to be a bit of a rush but we did it, snagging the last parking space round the back & settling at 2 tables of 5 in the very nice Three Tuns pub. Some good pub meals & a few beers were followed by a nightcap with Tim & Chris in the caravan later (becoming a habit!) All of us were looking forward to a good sleep,
Sunday: the sun was back again, blue skies calm seas – the gods were truly smiling this year.
Today our adventures would be at 1pm and 4:30 so we chilled down at Porthkerris for a few hours, until I found I’d forgotten to bring my dive computer! Fortunately Vicki had returned from her run & was about to cycle to Porthkerris & would bring it before her swim – Tim definitely started something there!

Our first dive was a little rushed as the Cat was running 15 minutes early but we managed it without forgetting anything major.
Mark had placed the shot directly on the Mohegan boilers so down we went for a scoot around & then a more thorough rummage across the sheets of metal & girders. Pink sea fans were in plentiful supply. 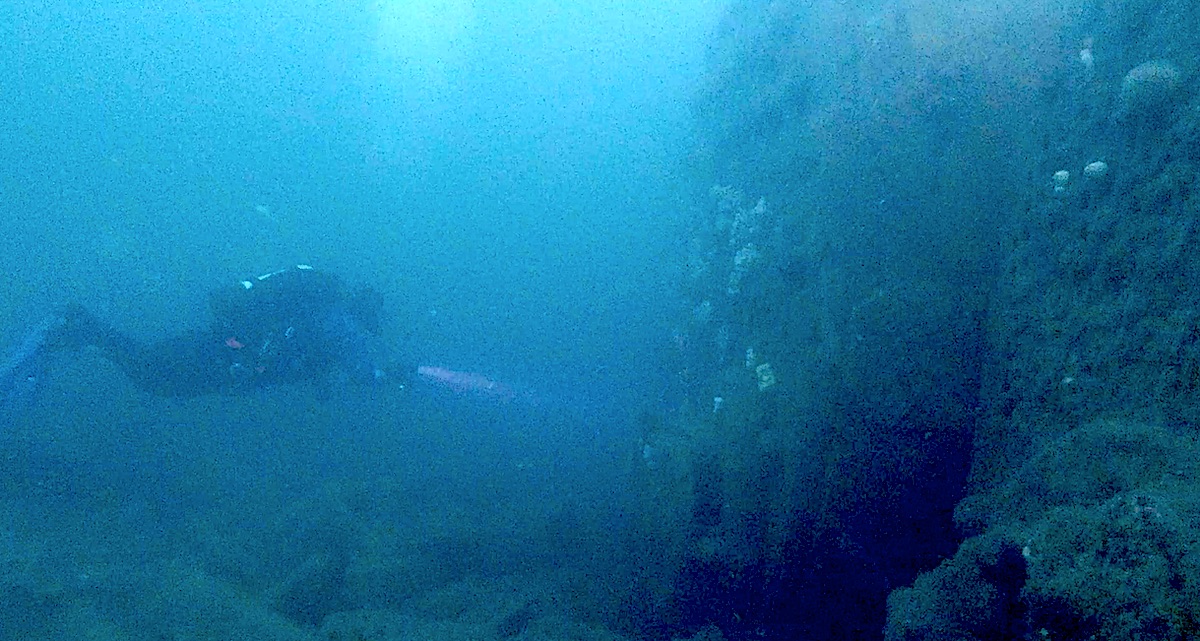 An attempt to show the scale of the Mohegans’ boilers!

Having partially explored the wreck yesterday we left it after a while & explored the reef in more detail, a most enjoyable time.
Lunch from the always good Porthkerris ‘cafe’ was a squeaky cheese & egg bap & a mug of tea with a fair few hours to kill before dive 2 – turned out less than we thought as the Cat was now running 45 minutes early! 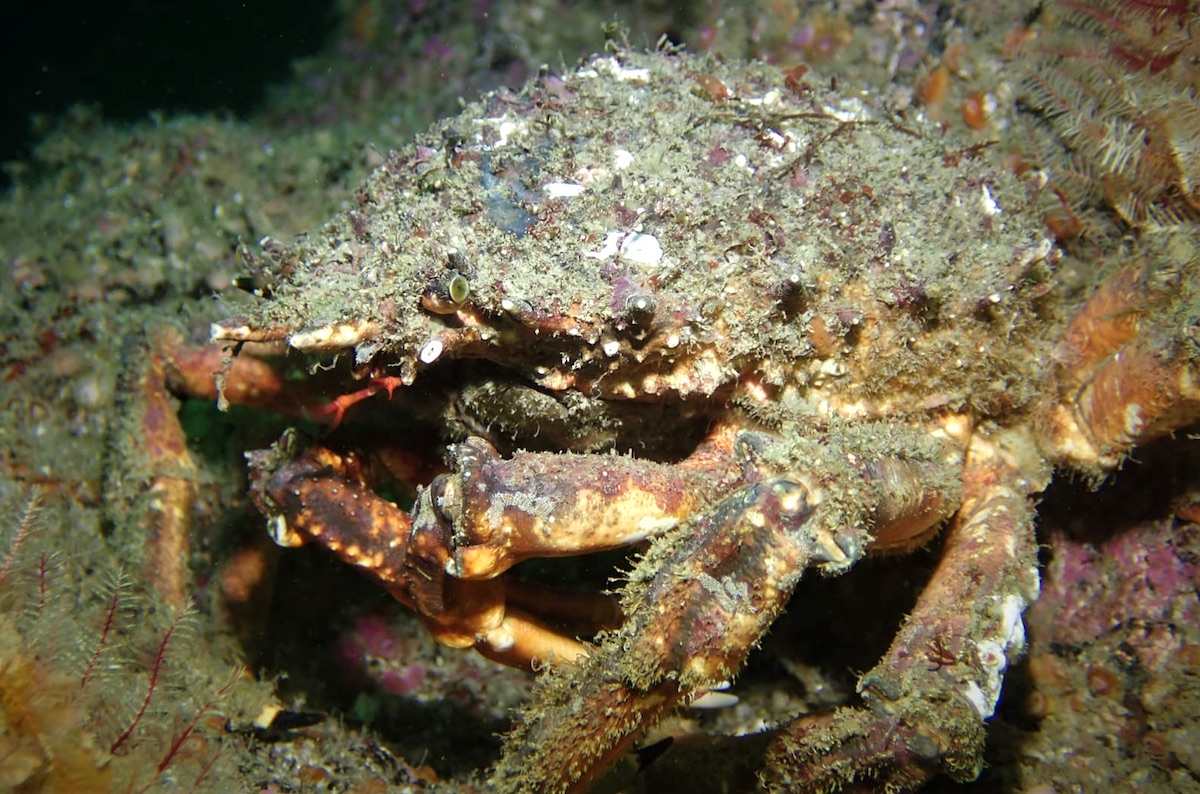 A crusty old gent if ever there was one!

In we went & down to a very scenic vista of large chunks of wreck nicely set off against a white sandy bottom. We landed in the middle & headed north to less metal . Tim & Geoff later advised they had gone south to the majority of the wreck.
There was plenty to see, including a trigger fish – best dive of the weekend said Chris & we all pretty much agreed. 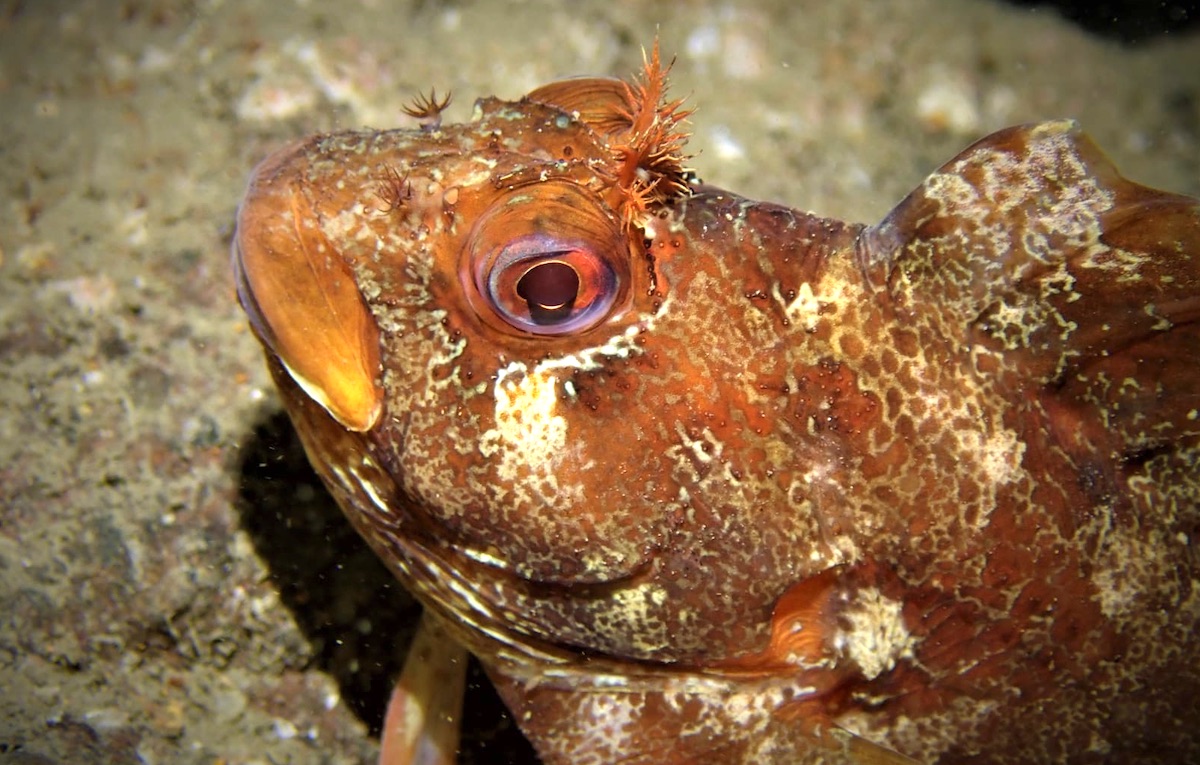 There was no rush this evening!, Geoff & Teresa were off for. a meal in the Paris Hotel in Coverack,, Neil & Kath had other plans too so Tim & Chris volunteered to get fish & chips down on Coverack pier and we’d get beer. In the end, it being Sunday the shops were shut so they got both – after of course sampling a few, the latter due to the first round sliding off a very sloping bar.
Our usual group gathered in the caravan to finish the beers & discuss the day – and for me to reveal my quivering fear of daddy-long-legs who seemed to want to crash the party!

This is my pipe, get your own!

Monday: Tim, Chris, Geoff & I had opted for a dive at 9 on the Kitten but Geoff opted for a swim instead so with 3 it was a very roomy boat & Dave suggested Pancras head so why not!
Our trio duly jumped in & followed the shot down to the kelp & rocks at 15 metres where it was pretty murky. We set off & soon came across numerous gulleys & outcroppings patrolled by most types of wrasse, walls of dead mans’ fingers occasionally appeared & visibility cleared somewhat. A few dips down to 23 metres saw us passing numerous crayfish waving their lengthy feelers at us. Eventually we found ourselves on a pinnacle at 18 metres running out of bottom time & so ascended with another cracking dive under our belts. 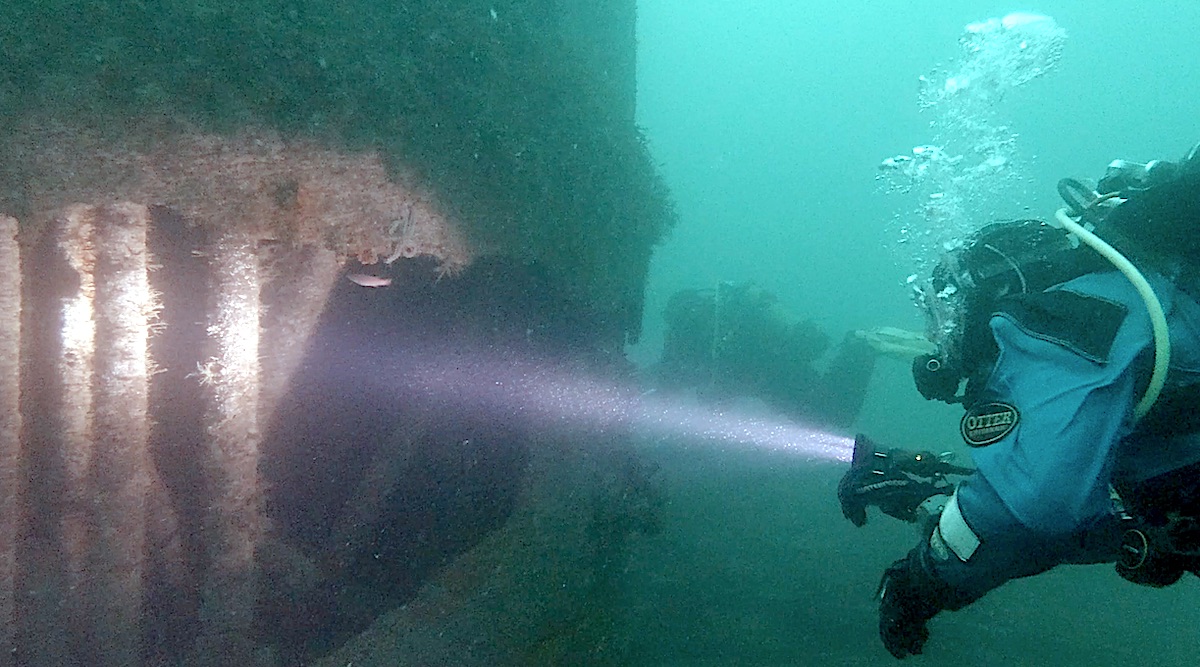 Boilers of the Carmarthen illuminated by Chris

And that was it – 5 good dives, great weather, great company. My thanks to all the divers, walkers, swimmers & cyclists of the party for making the weekend the success it was & to prove I’m not just saying that, a final word from one of our intrepid party (who took many of the better photos) which sums it up nicely!
Geoff – ‘Just to say what a great weekend with fantastic weather and great campsite. Also what a pleasure to have so much room on a very efficient shuttle to the dive sites.
The skipper put us on the boilers on all the dives, with a comprehensive brief, letting us know how he would dive the site.
What a treat to travel down to dive the Carmarthen, a very picturesque wreck on a white sandy bottom.’ 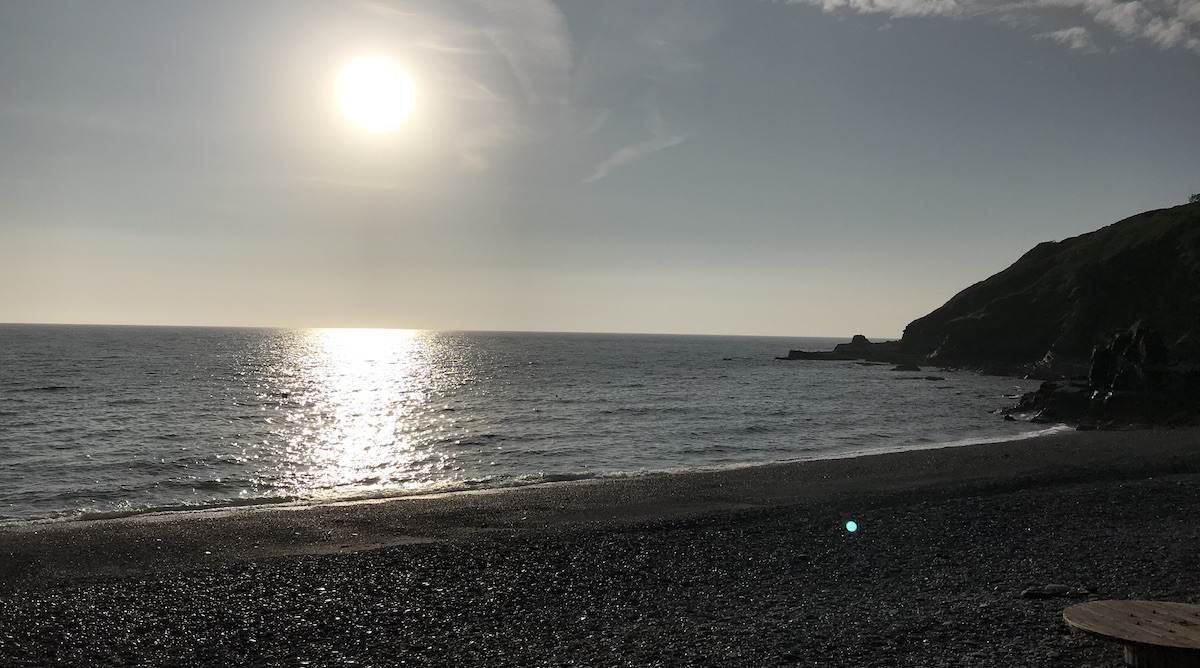 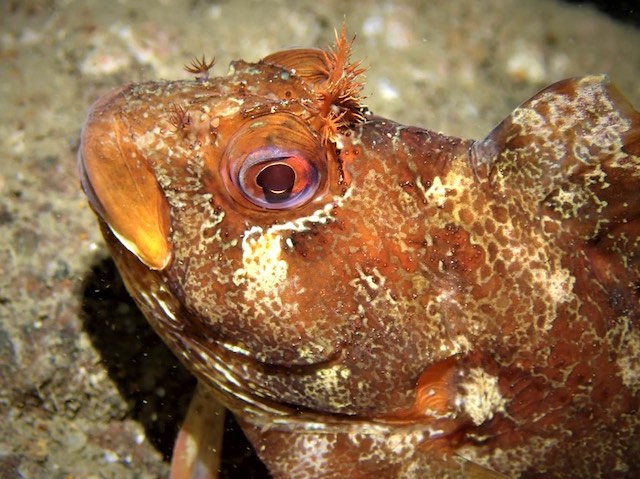