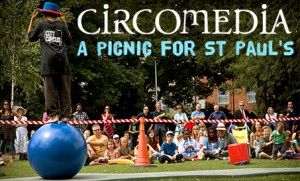 13th September, 2008 :Circomedia is a circus cabaret who put on a show in Portland Square, St Pauls. This was a variety show featuring some of the best local talent on the circus scene. Our host and compere for the show was the world famous Rod Laver with his amazing oral manipulation routine (ping pong ball juggling with his mouth!). Along with Rod we had a sensual doubles trapeze act, a gentleman juggler with a very cool trick, a dramatic acrobatic performance and a mesmerising aerial performance and a juggling orchestra conductor.

The performances also featured Bristols gypsy jazz band, Sheelanagig – famous for some blistering live performances at festivals across the UK and into Europe, and caused dancefloor mayhem from the Scottish Islands to the South of Italy. There was a licensed bar serving beers and wines as well as a range of snacks.

The event was attended by 11 divers and non-divers and we did indeed have a very good time. The performances were stunning and very amusing, and assorted, including some absolutely excellent trapeze artistry. Might we go again one day?