26th June, 2016: Chris H picked me up at 6:40 just as the heavens decided to open (hopefully not an indicator of the day to come!) before collecting Abhi & heading down the M5 to Plymouth. The Glastonbury chaos of earlier in the week was nowhere in evidence & we were making good time when Tim called to say he’d set off sans regs & would have to go back!
Arriving around 9 we went to get the boat only to have the second challenge put in our way: the jockey wheel was flat!  These things are sent to try us but some inch-perfect maneuvering by Chris of his X5 meant we managed to get the trailer hooked up anyway only to be hit by the hat-trick!  The nearside rear wheel on the trailer locked & gouged its’ own track in the gravel!  Tim & John arrived at this point & Abhi provided some hefty tugs on the brake that eventually freed the wheel – no more problems please! 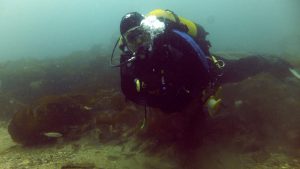 Dive 1: Kitted up & launched we headed for the James Eagan Layne but the sea had other ideas: becoming increasingly choppy with the wind whipping white crests off the waves. Tim wisely called it & we headed for the Mewstone but before we got there we decided to try the Glen Strathallan. A hardboat already there cheerfully told us the viz was good (8m+) so that clinched it. First wave was Chris H, Abhi & myself, there was quite a current & it took some effort to get to the shot before the descent. Going down it was very milky & I wondered if we’d been played but around 12m it started to clear & by the time we reached the boilers it was a good 8m plus as promised. Chris took the lead as we worked our way round the boilers & peered through the circular holes only to find two large bright blue conger eels peering back at us!  Not only that but there was a third down one of the other holes – the dive was already memorable! 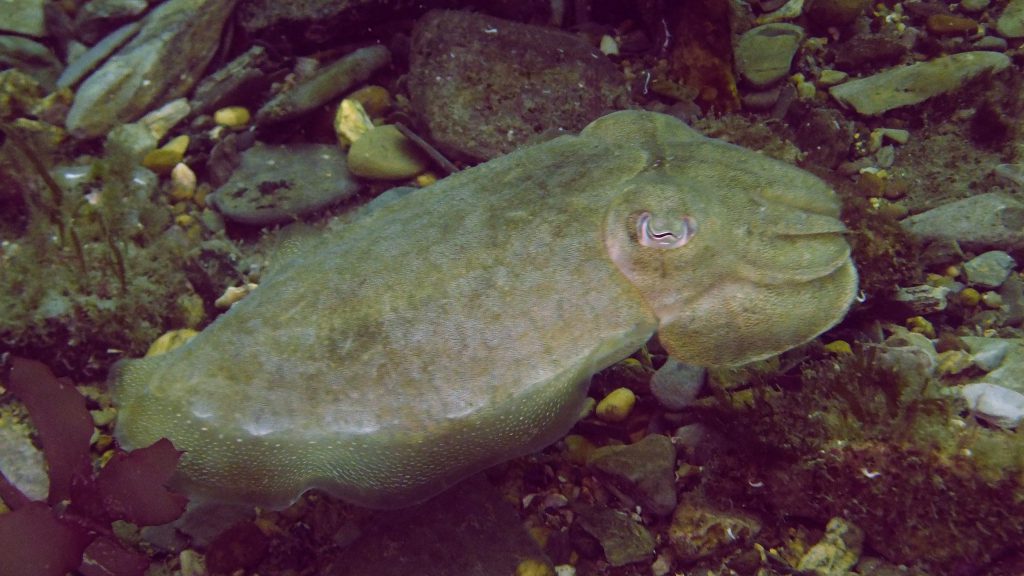 As we worked our way across the wreckage I noticed a large number of fish following Chris, attracted by the silt (& potential food) his passing disturbed. As an experiment I gently stirred up the bottom in front of me and soon had a very attentive audience of wrasse, bib & other fish – very entertaining! 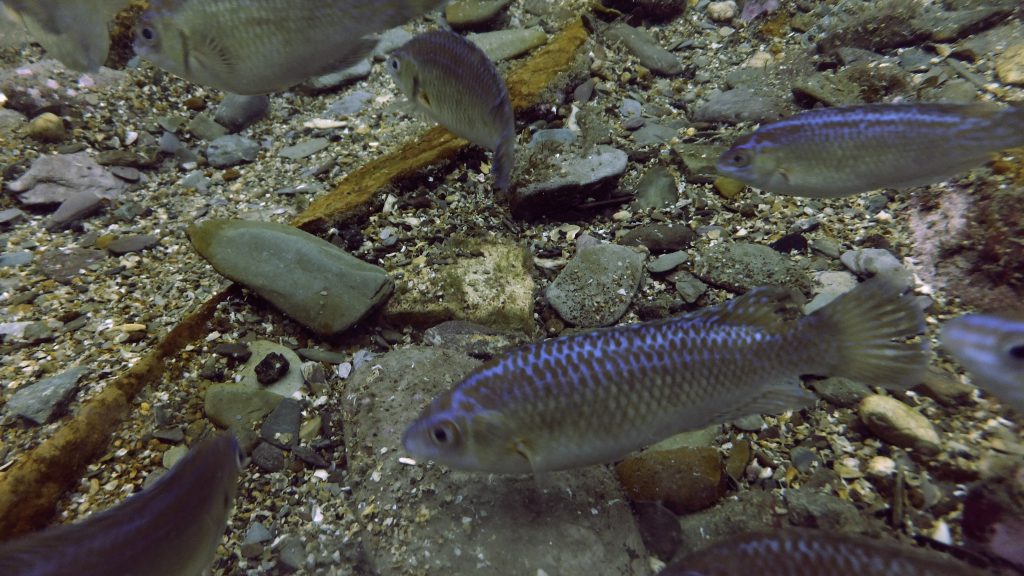 As we continued our exploration I thought back to the last time I’d explored the Glen & what a contrast actually being able to see things was! Nearly an hour later we headed up with tales of congers & fish spectators for Tim & Jon to take their turn. 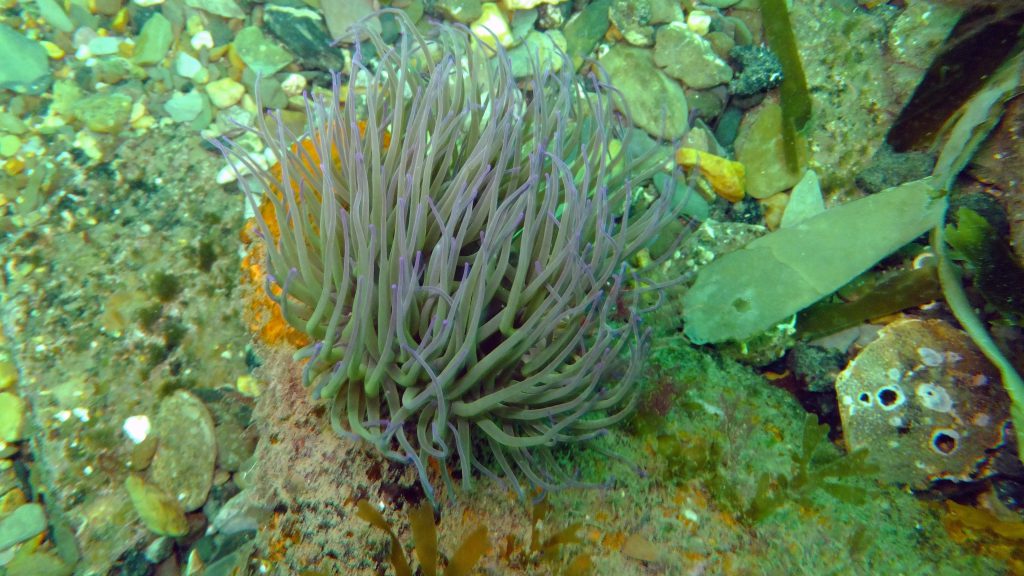 Since we had a late start we resolved to have a quick lunch & get back out but the best laid plans and all that!  The sandwich van,normally near the top car park – whose creations I fondly remember from previous trips was absent so we tried the small cafe up the road but they were closed (it was ‘forces day’) while the Mountbatten centre was hosting a wedding & said they couldn’t do food! It was now gone 3 & we were desperate!  Not to be defeated we put together a nutritious lunch of crisps, a chocolate bar & a cup of tea until they took pity & offered us cheesy chips – note to self: check catering arrangements before deciding not to bring sandwiches!

Dive 2: Since it was so late Tim opted to just cox & Jon offered to ensure the spare cylinders in for fills didn’t get locked in the shop overnight. My cylinder ended up with a nitrox fill (32%) due to getting mixed in with a huge order of other fills (for free!). Chris H, Abhi & I headed out for the Fort with Tim at the helm. 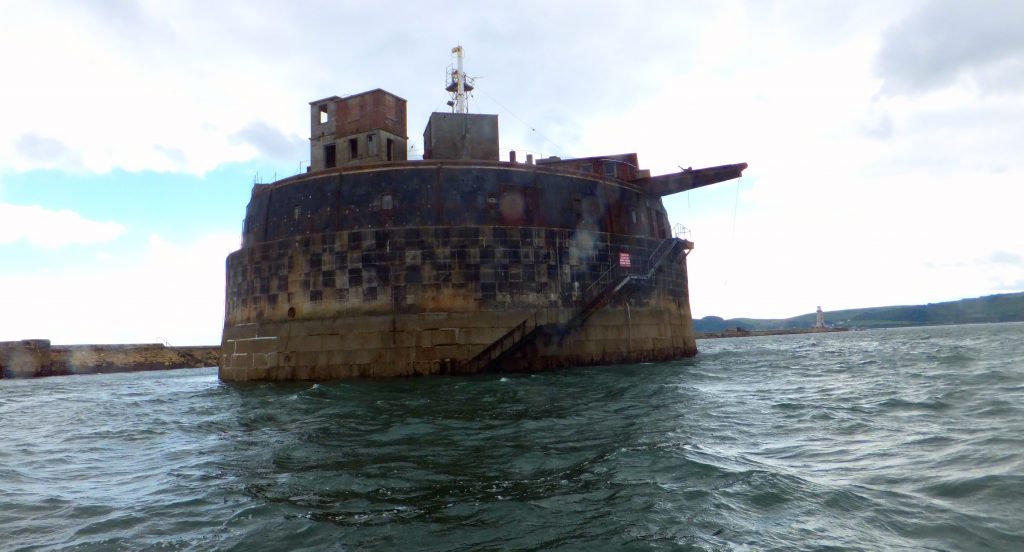 Going down was disconcerting due to the milkiness of the water & I thought viz was going to be a problem but again things cleared, not as much as on the Glen but acceptably (and even more so on the sunny side). Working our way round we were the proud discoverers of two more congers & the biggest, angriest crab I have ever seen – we all gave it a wide berth!  Plenty of smaller crabs had secreted themselves amongst the debris while a stand of a dozen pink sea fans on a large object took on the appearance of a 2 dimensional copse of trees! Chris found a nudibranch as did Abhi while the fish, while not as plentiful as on the Glen outdid those in size, particularly a large green one of whose genus I am uncertain. We were at our safety stop when we heard Tim revving the engine & banging on the hull above & when we surfaced we realised we were cutting it fine if we were to get fuel!
Despite a small queue we managed the fuel, Chris got the car & we took the boat out to give it a well deserved rinse off before bidding all thanks for a great days’ diving – we must get back down here again soon (this time with my video camera!)
Text: Kevin, Pictures: Tim