30th January, 2015 : Sue R. called a Dive On! for pretty much any day at the end of January & I joined her to progress my Ocean Diver training and have some fun at the National Diving & Activity Centre (NDAC) just north of Chepstow.

My eagerness meant I set off so early I missed all the traffic & arrived before the NDAC staff & in time to see the sun rise over the complex! The car park is somewhat pot-holy (is that even a word?)(maybe holey, Ed.) but enormous & easily able to cope with the no more than 8 cars that turned up! 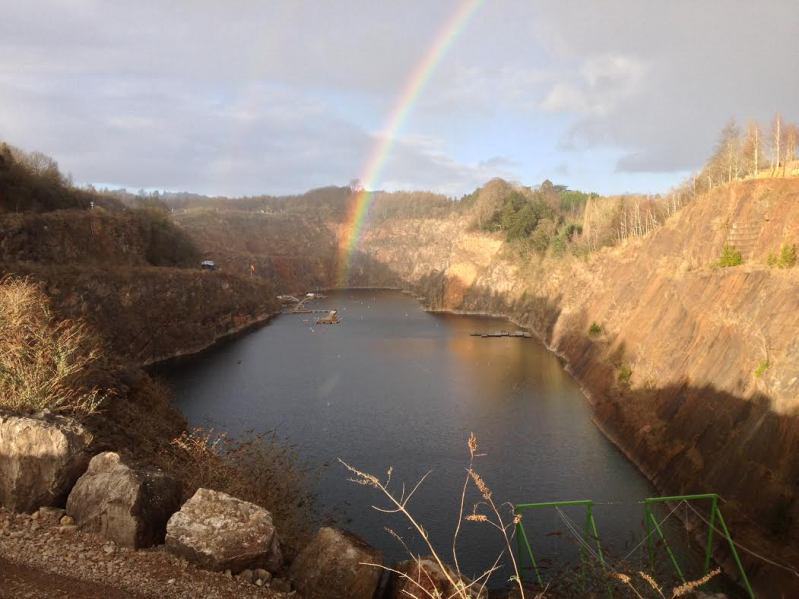 With blue skies all round, a slight chill in the air (we were told the water was warmer at 7-8 degrees) & no sign of rain or the threatened snow Sue & I kitted up in the centre at the top of the quarry (where there is a restaurant, showers, changing, toilets, air fills & a shop) & then a minibus took us down the steep hill to the pontoons; the driver warned us the army had been in learning ’breaking & entering’ – if you can’t trust the army who can you trust! & there were a lot of cables around so to watch our step!

As we finished kitting up on the pallets on the pontoons a couple of divers emerged from the depths & we exchanged friendly greetings – a great thing about divers – we already have one thing in common!

For the first dive we covered OO3 including Alternate Air Source ascent as donor & receiver followed by a leisurely tour north from the pontoon round a host of interesting items all at very accessible depths – no more than 14m – I spotted a land-rover, an amphibious vehicle, a plane, an iron! & the ubiquitous couple of shipping containers. More details: NDAC attractions

Then….the first wildlife I’ve seen on a UK dive – a host of fish & a very cheeky one that approached within a foot of Sue.

Exiting the water the van took us back to the top (literally in reverse!) & we debriefed over a steaming mug of tea from the restaurant.

Then it was back down in the van with our driver, Chris, chatting extensively about the various mixing courses he’d been on. We covered OO5 this time & once again visibility was excellent: 10m+ & the fish were again very much in evidence.

Later the rain did finally arrive but it was such a fine mist that we were witness to a fabulous rainbow arcing from outside the quarry down to exactly where we had been diving near the pontoons – what we couldn’t work out was why we hadn’t spotted the pot of gold!

A mug of tea & a debrief later in the restaurant & Sue & I both agreed we’d had a very enjoyable day with the place pretty much to ourselves.

If you haven’t tried Chepstow diving at the NDAC I’d thoroughly recommend it; I hear it gets busy at weekends so I’d recommend a weekday where you pretty much have the place to yourself with plenty of friendly personalised service! The air fills are cheap (£3.50), the entrance is only £8 until the end of Feb, there’s a lovely restaurant and there’s plenty to see even at trainee depths!