From Sue: Saturday the 22 August saw a return to diving for five of us.  Our first dives since lock-down.  And our first dives at Cromhall Quarry since it has re-opened under new management.

Before the clouds broke & the sun shone down!

Our primary aim for the day was to choose a sheltered water site where we could check ourselves and also our kit, some of which had been recently serviced (the kit, not ourselves 🙂 ), before venturing into deeper, more exposed conditions.  The exercise was a success – we went ‘there and back again’ safely and happily, enjoying our return to the water.  A few minor kit issues were discovered which now can be addressed. 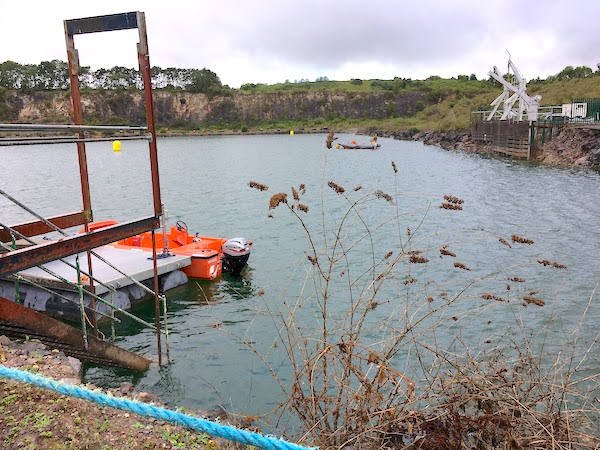 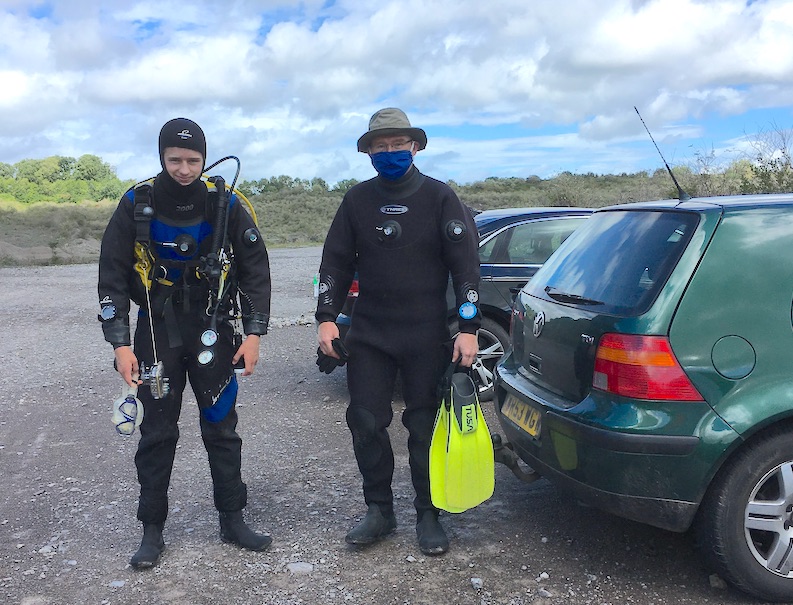 All kitted up & somewhere to go!

Neil and I found a pallet at five metres, a long important looking pipe and a box thing with a lever inside it, and Tim’s toilet which is buoyed.  And a bath.  No telephone box though.  Oh and also a bicycle frame.  And lots of darkness and low viz.  Steve and Geoff found a cabin cruiser while Geoff and David found two shipping containers on their side.  And David found a newt on our dive.  Ok, it was only a tiny one, but still he was the only person that saw one!
Left: The deep end!
Rob did not dive and was part of the shore cover and helped out brilliantly.  We each had an ‘assistant’ rather than buddies getting too close to each other too soon and this worked really well.  And we each used our own vehicles as our personal bubble/bench.  It was busy with other divers, but we all maintained our distance and stayed safe. 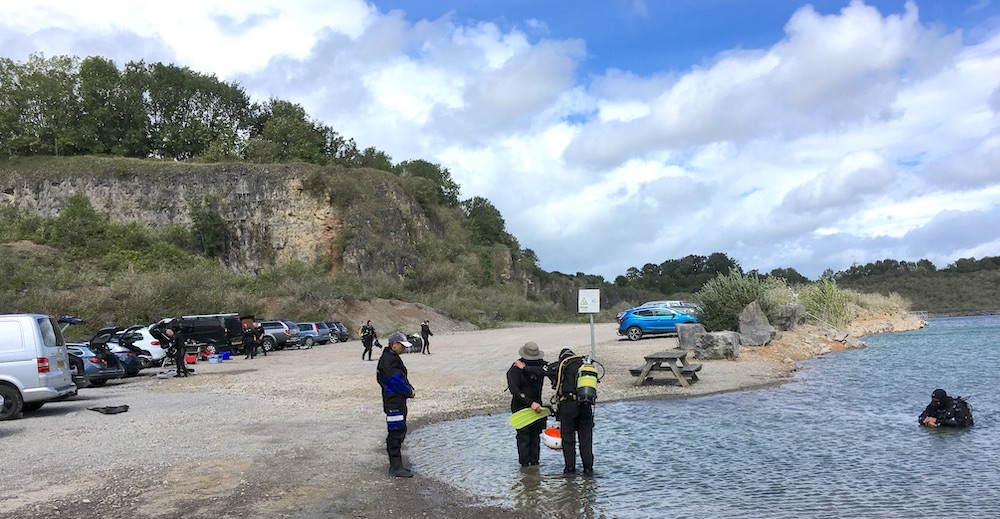 The new operation at Cromhall is into the second week for diving and a couple of weeks longer for swimming.  It’s an ongoing work in progress and so at the moment their facilities are either basic or non-existant.  Everything that Maggie and Simon had installed had to be removed so there are almost no underwater attractions just now and no entrance cabin where we used to pay and eat cake.  But at least there are loos! 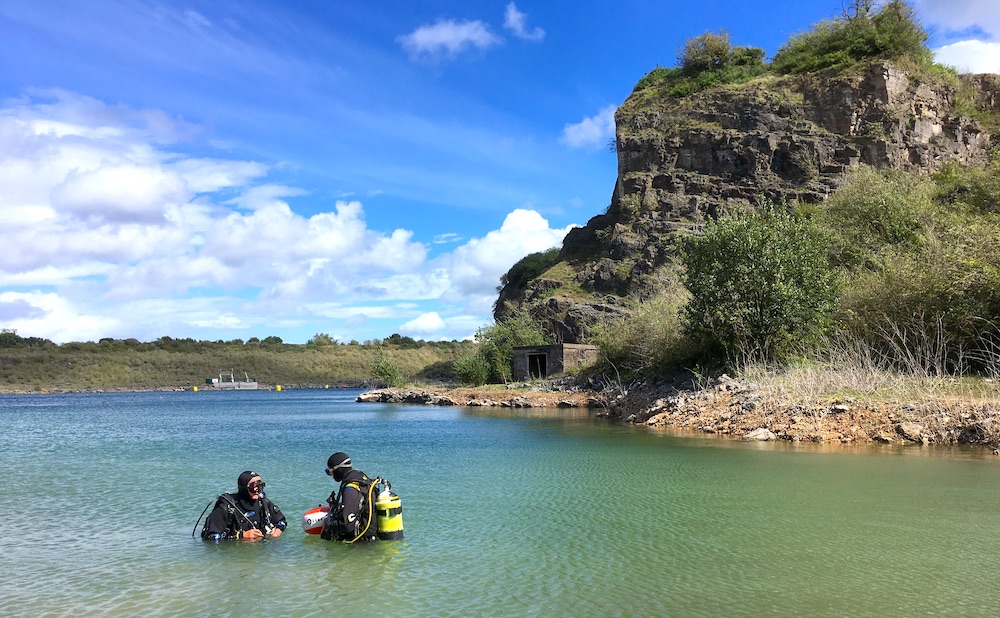 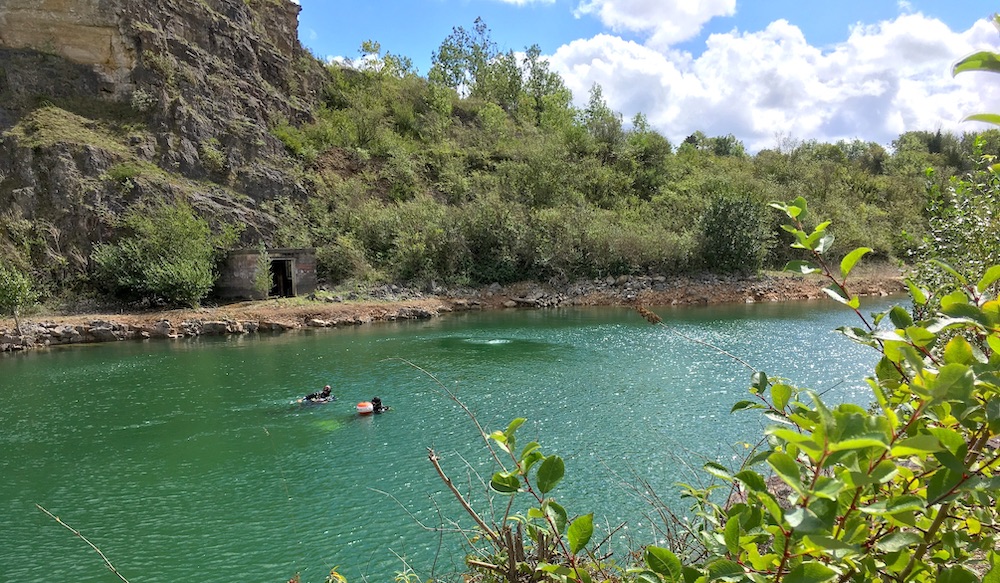 If you wish to dive there just go onto the new website – https://www.cromhallquarry.com/ . Slots for the weekends tend to be released on Thursdays, but this may change.  You actually enter down into the quarry car park via the Southwest Maritime Academy entrance and not by the old bus park entrance.  You need to park in the main car park, then queue up to check in and pay the exact cash (not booked means no entrance).  Divers then must travel round to the shore end while swimmers remain at the pontoon end.  There is a lot of work going on, such as an old road being opened up again into the main car park and a helicopter which is already underwater will be relocated and buoyed in its final position.

A few of the first pioneers to the new Cromhall!