Fog and M5 road closures were not going to stop Tim and Chris heading for Brixham. In fact the fog made the drive down picturesque: clinging to the ground, making it look at one point as though we had already arrived at the sea!

Arriving at Brixham we found there were only a couple of cars with some divers already kitting up. The café was closed until 10am, so diving came first and the bacon butties had to wait! 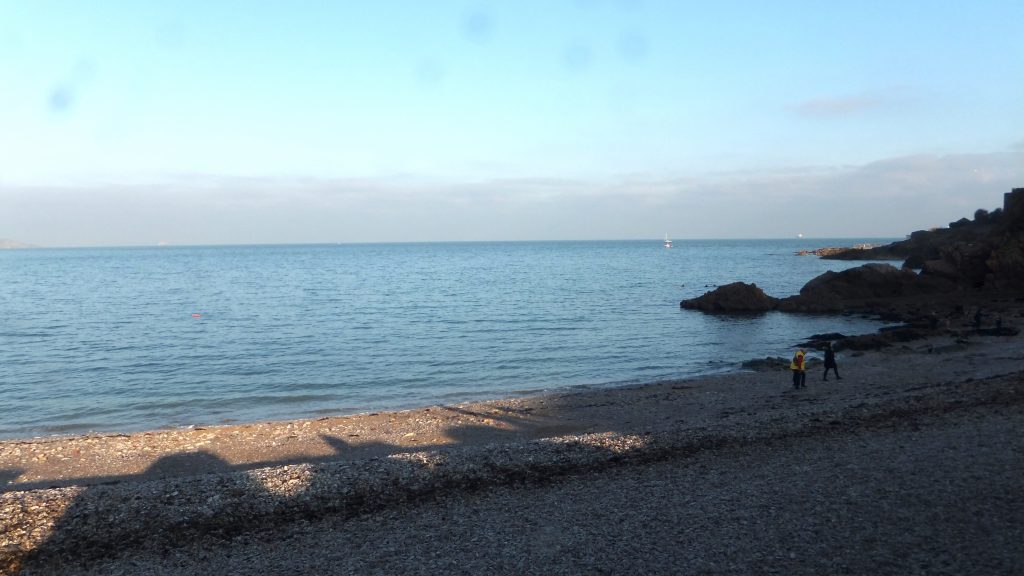 The weather was perfect, a sunny and crisp winter morning with the sea beckoning – one hardy swimmer was just finishing a swim across the bay in only a swim-suit! Brrrrr. Not for us we agreed and headed to kit up in warm undersuits and drysuits.

Chris had a new drysuit and the first order of the day was a weight check. Tim kindly waded out to help with plenty of extra lead to add to the already laden diver. First attempt left Chris haplessly floating on the surface – more lead needed; with sufficient added Chris exhaled and at last sank to the bottom – a satisfactory outcome. 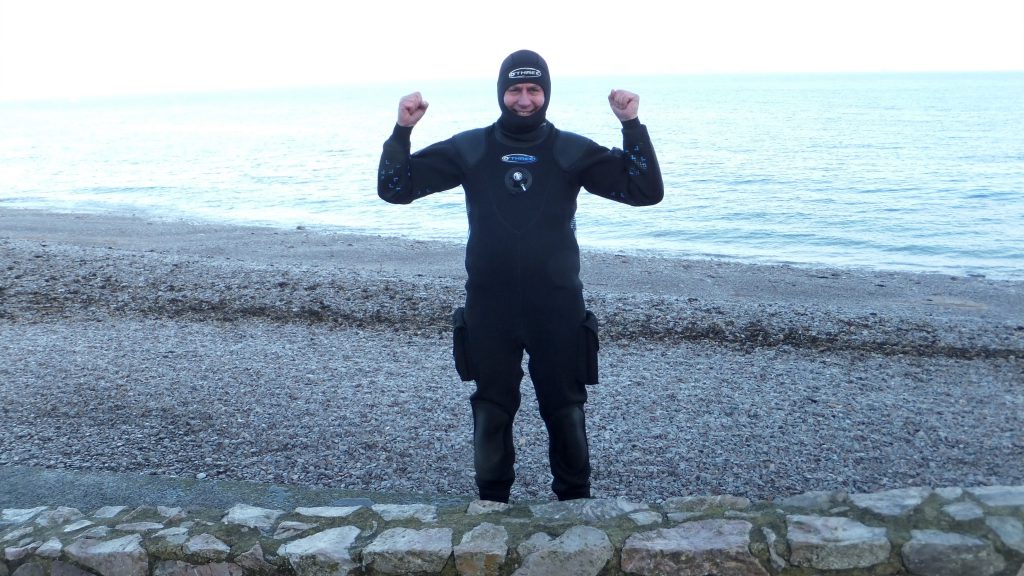 Tim quickly kitted up and buddy checks having all been done waded into the water to join the perfectly dry and warm Chris.

Visibility was as posted online: 2 to 3m and excellent for some macro diving searching for critters. There was an abundance of crabs, including many hermit crabs of all sizes and even one hermit sizing up a new home. 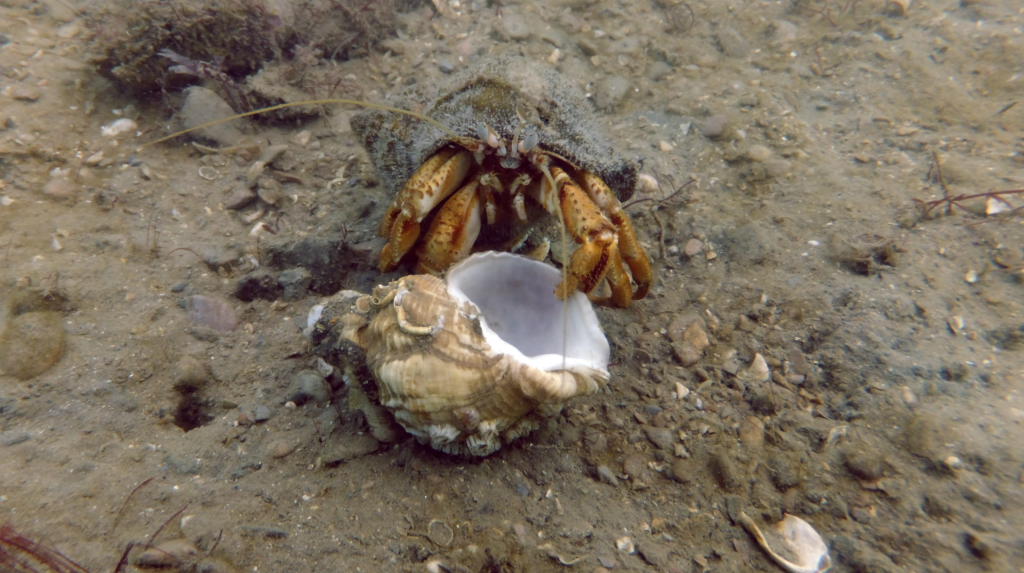 We worked our way out North and then to the East following the line of the shore, exploring sand, rocks and sea grass; after half an hour retracing our path then West and South to the shore; the sea having calmed nicely for our exit, though at low water so a fair walk up the beach to the car park.

This was an hour of fun under water watching the wildlife getting about their business.

It was now time for those bacon butties, a tea and coffee and Christmas cake to follow. Healthy eating essential for us divers! 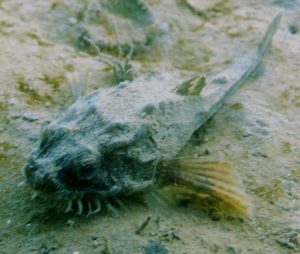 For the second dive, an hour later, we took a similar path and spotted more box crabs in their distinctive burrows, with two exits and a claw appearing at each exit.  Their sideways motion and speed of movement, as they darted across the sand, was fun to observe.

We also saw a very distinctive fish but we were uncertain what it was. Tim took some pictures so these were reviewed to confirm the fish with some help from interested parties on Facebook.

It was identified to be a Pogge Fish (a.k.a. Hooknose or Armed Bullhead) Scientific name: Agonus Cataphractus.

Exiting the water some 50 minutes later two very satisfied divers de-kitted and headed for the Breakwater Bistro café for a debrief and a well-earned cream tea. 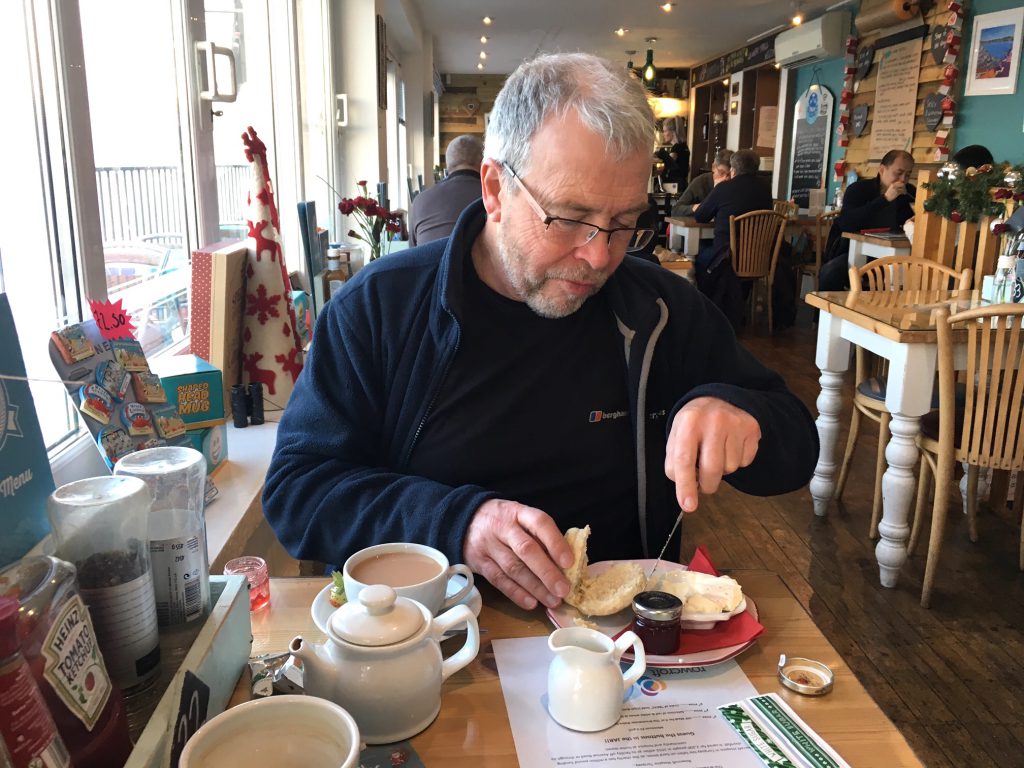 That ‘well-earned’ cream tea being partaken of!

This was the last dive for the club year and it was well worth making the trip to Brixham.

Before we left we headed up to see Baz at Brixham Dive Shack for some air fills and to take the opportunity to discuss the diving around Brixham and wish him a happy new year. Baz has a wealth of knowledge of the area and if you are diving at Brixham then it is well worth contacting him or checking out his facebook page.