From Tim: Having heard that recent storms had scoured sand and gravel from the wreck of the Glen Strathallen, significantly exposing more wreckage, a group of us were keen to go down to Plymouth, launch our club RHIB and see for ourselves. 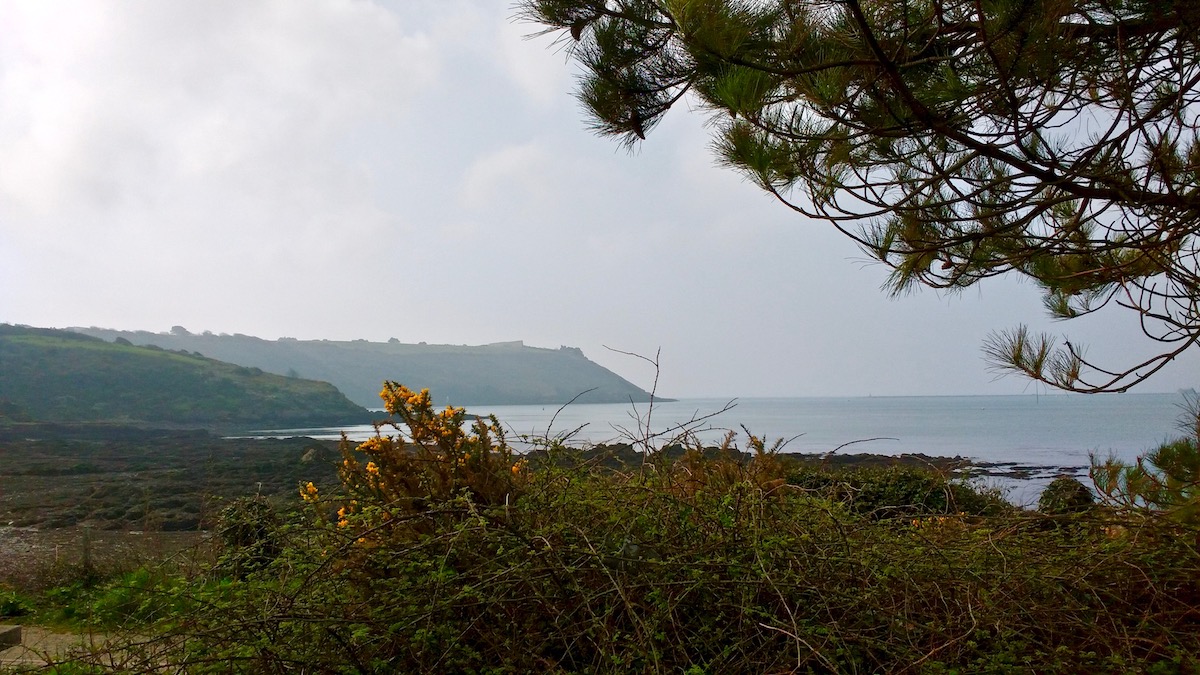 View across the sound

The weather earlier in the week wasn’t looking promising and vis reports even less so; but it’s amazing the difference a few days of good conditions can make and sure enough, the phone call to the local dive centre on Friday confirmed it to be looking very promising for Saturday. A quick email around the group confirmed the dive was on and an early start required to get to Plymouth by 9:00am to avoid launching at low water.

It was a very misty/foggy unpromising drive down the M5 but as we got closer to Plymouth the sun broke through and the mist and fog soon burnt away. Everyone arrived at Mount Batten safely and in good time and we soon had the RHIB full of our assembled gear on the water. A quick radio call to the Long Room on channel 14 to seek permission to dive the Glen Strathallen and off we sped.

With wind over tide the journey was a bit wet but with the sun shining down on us that didn’t dampen our spirits. Our GPS got us to the wreck site, the echo sounder confirmed wreckage below and the shot was dropped. 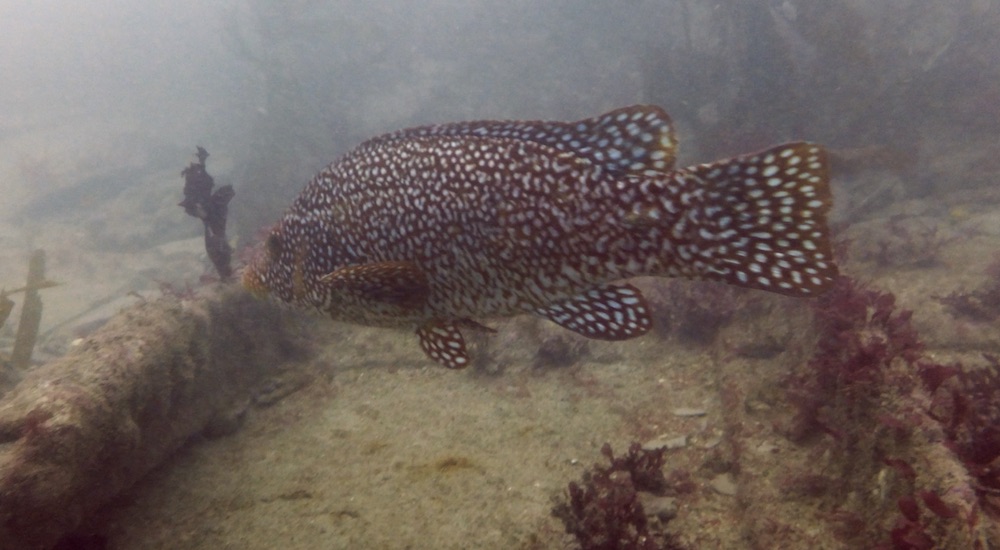 From Kevin: Neil & I went in first with Neil adding some extra weight for his new undersuit; 13 metres down & we found the shot perfectly placed on the boiler & proceeded to explore the new landscape. 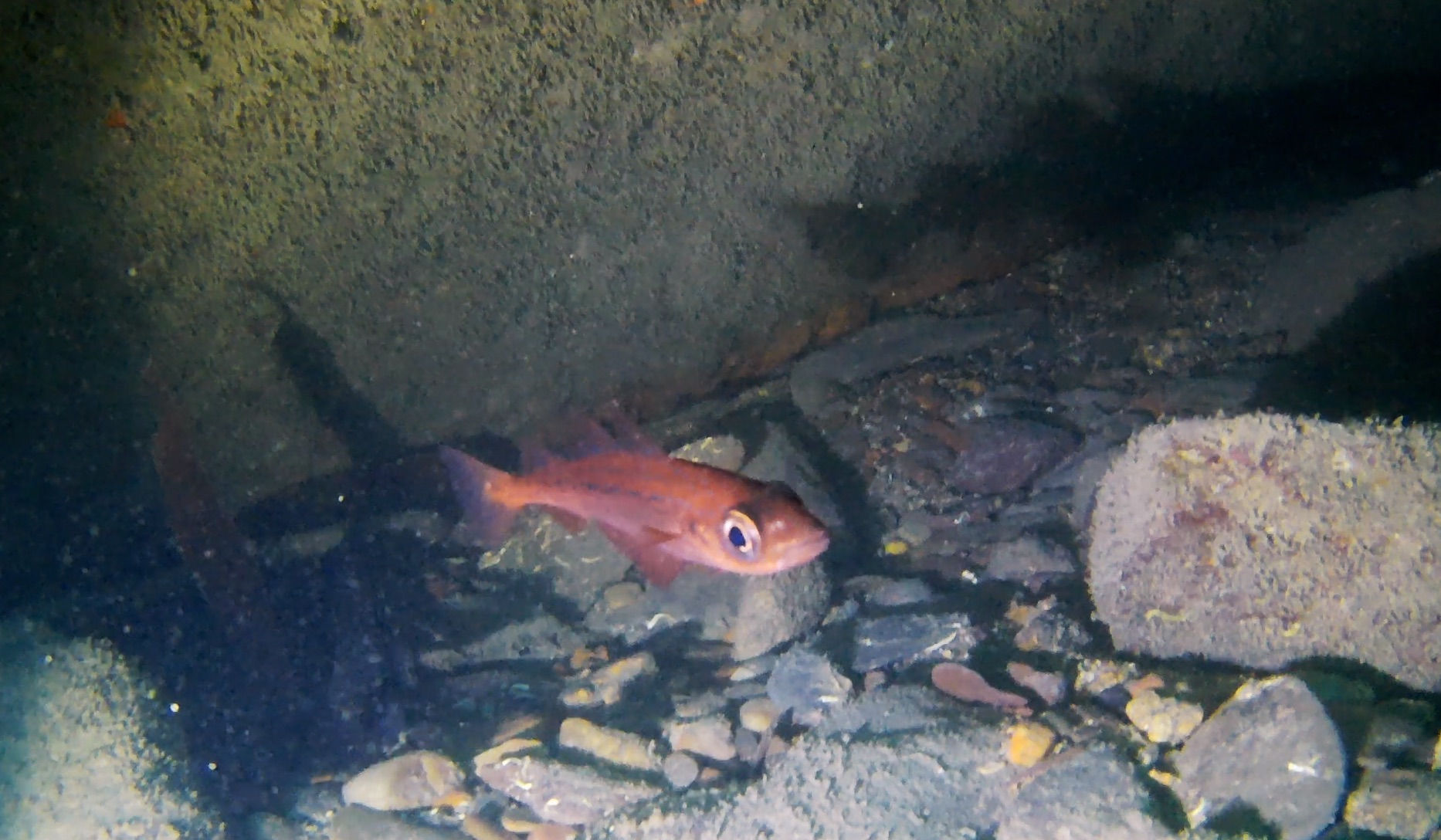 Viz was indeed in the 4 metre range & true to the report there was a lot of stuff to explore – mostly ‘lumpy bits’ – apparently the technical term whose function was not immediately clear & reminded me of ancient machinery from Alien! 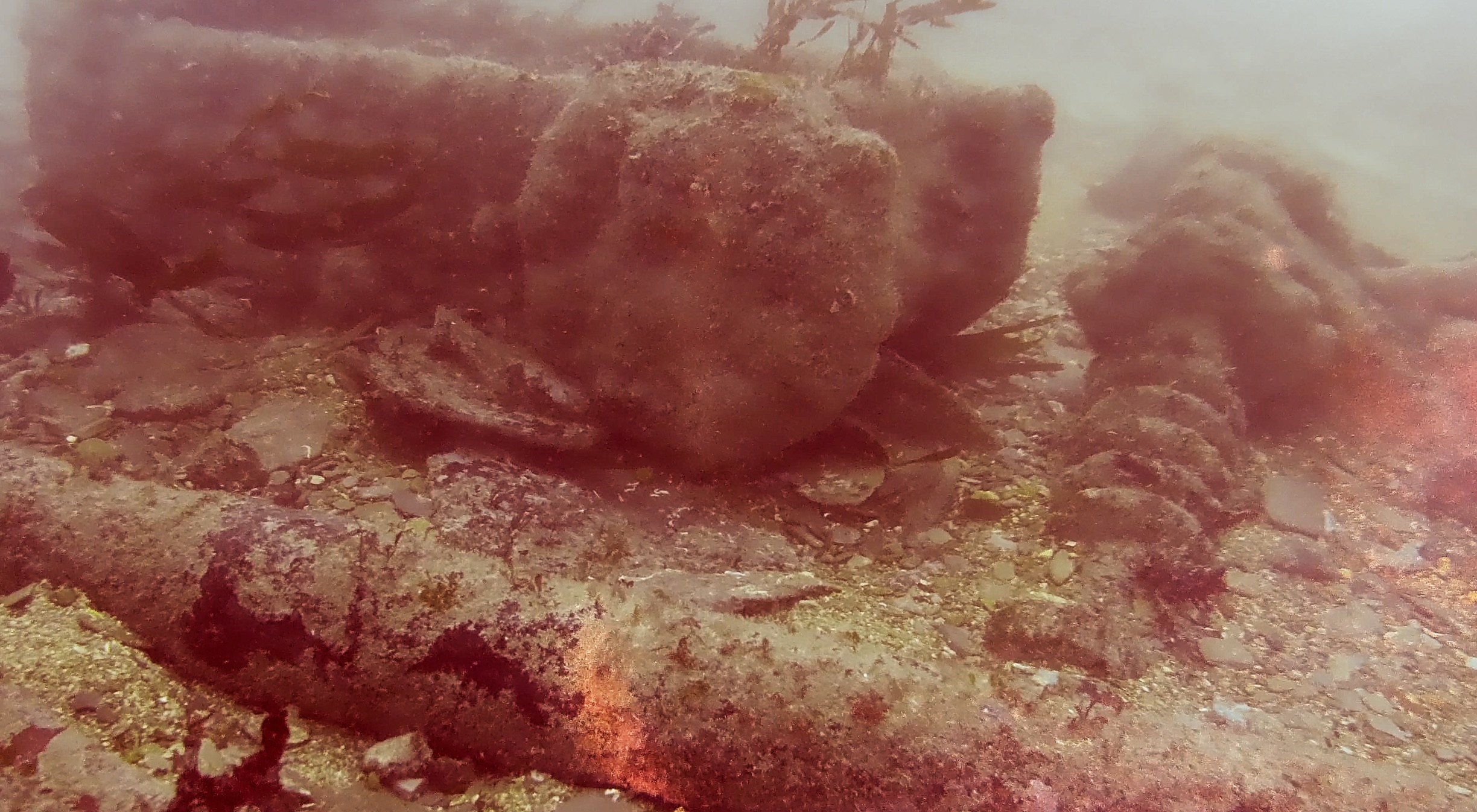 There wasn’t a lot of life around but we did run into a small female cuckoo wrasse, a large Ballan wrasse & a large cuckoo wrasse that seemed completely unbothered by these cumbersome giants from the surface. Meanwhile Bib hid within the giant hollows of the boiler with smaller fish also present. 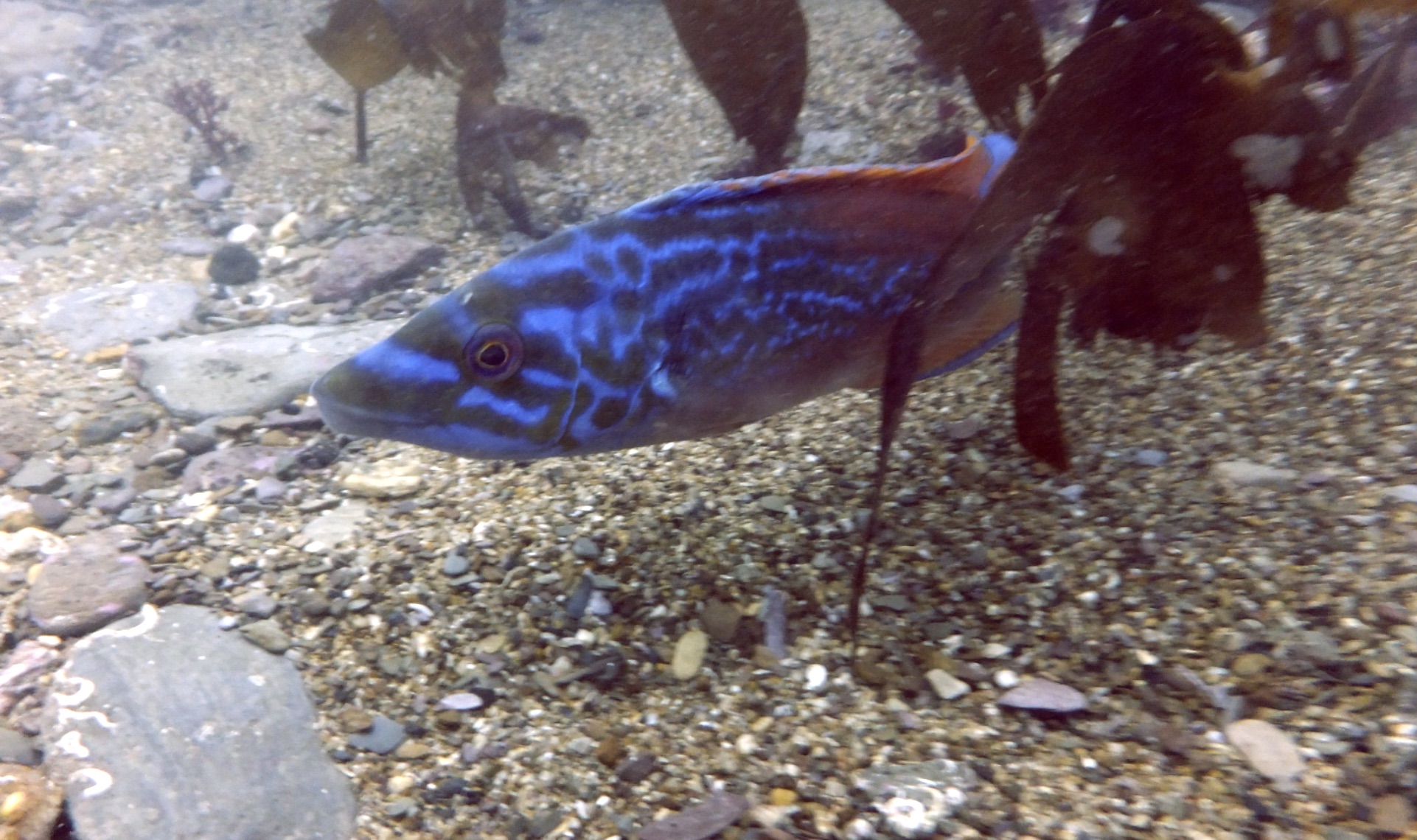 Back to Tim: As we descended the line in the milky 3-4 metres visibility, a dark shape loomed in front of us and as we edged closer became the boiler. My buddy Rich had not dived this wreck before whereas  I have many times, so with torch in hand I led him to the hole in the side of the boiler and illuminated a couple of large conger which always seem to be lurking within. This was a good start. 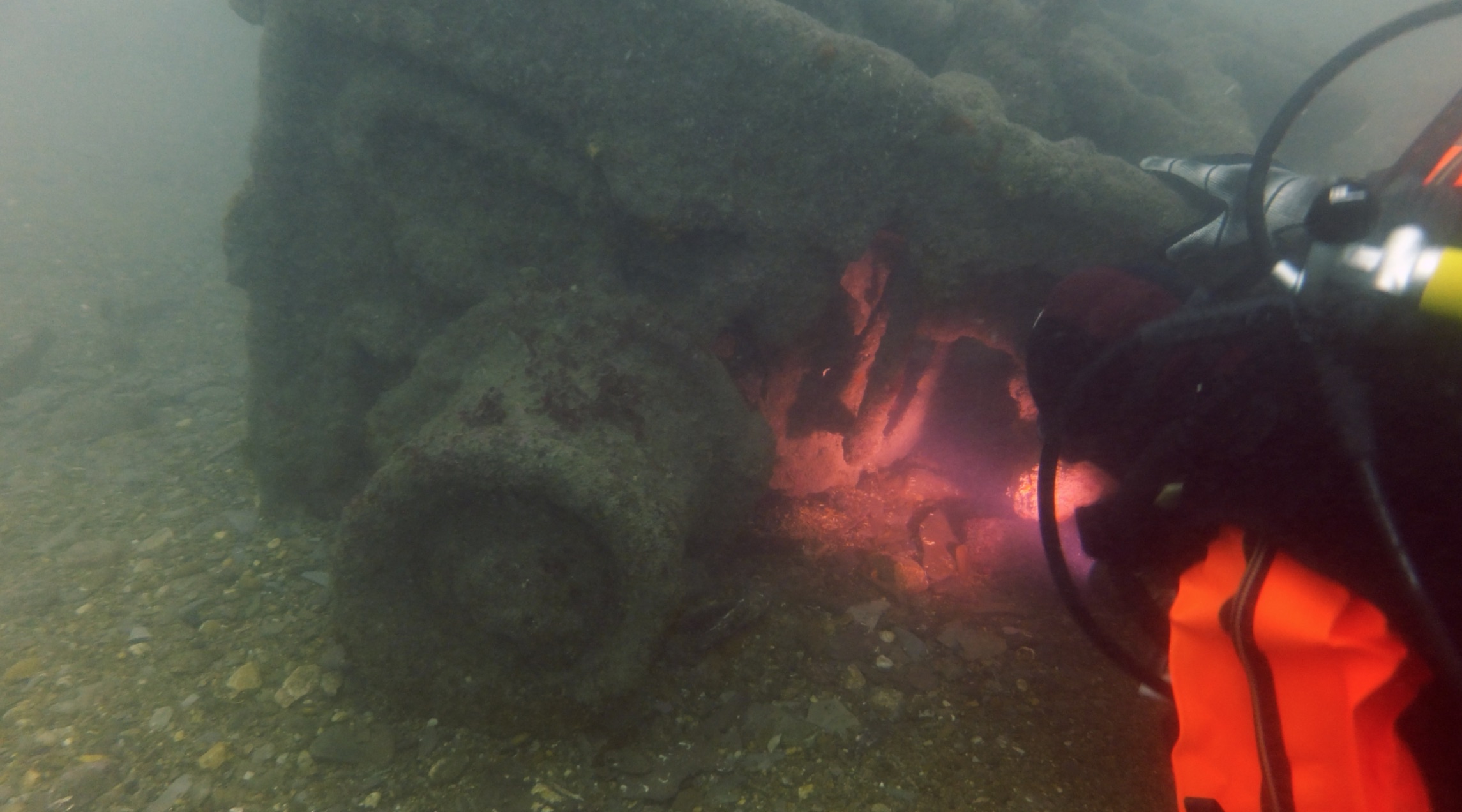 Rich has a poke under a ‘lumpy bit’

Moving off from the boiler it was for me immediately obvious that indeed, much more of the wreckage was now exposed. I’d like to do her again soon, in better vis to really appreciate and take in the whole picture. My buddy Rich and I each had a really good dive but for different reasons. Rich as it was his first visit to the wreck but for me, the fascination of seeing much more of her than I ever recall seeing. 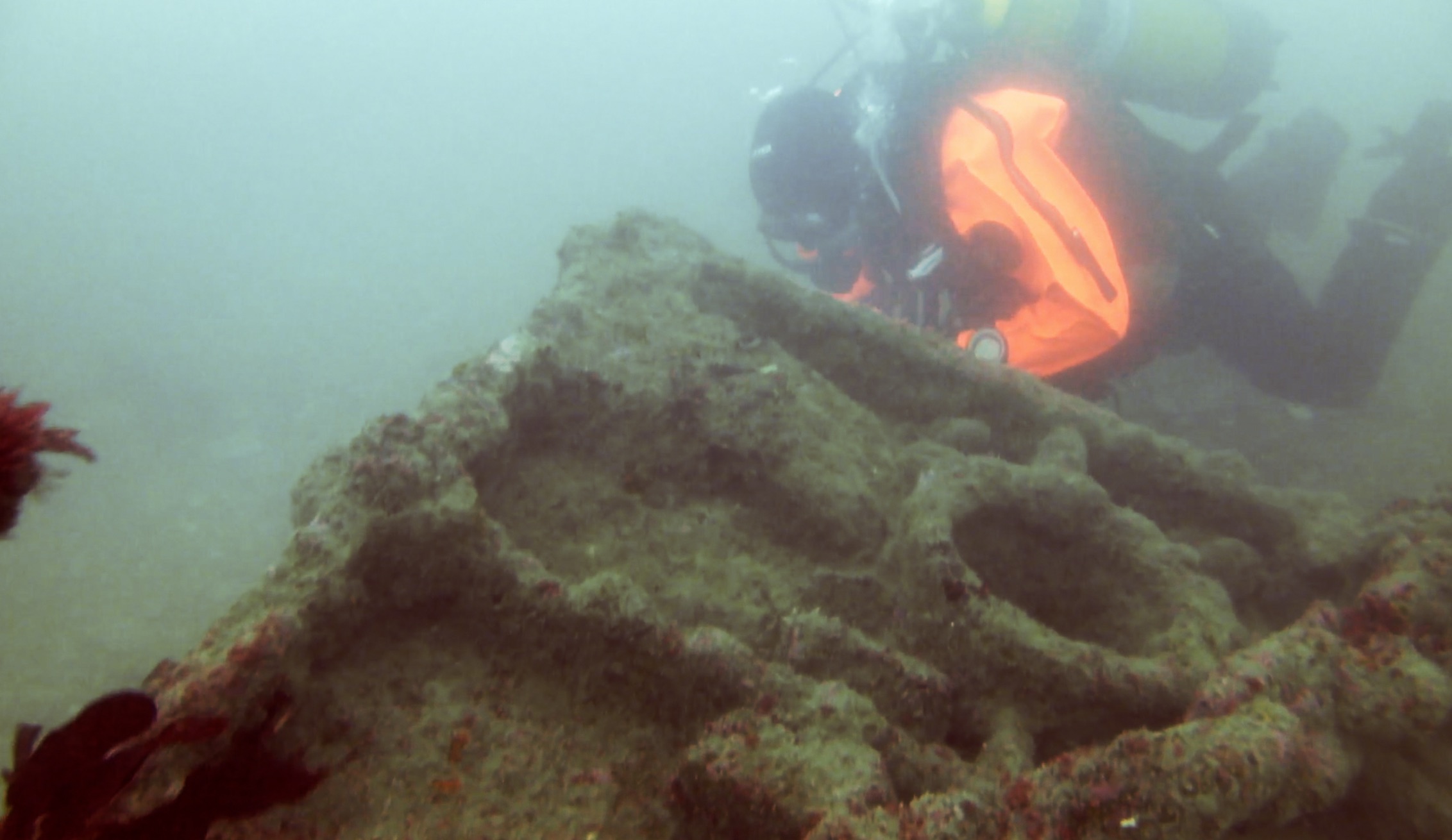 We found our way back to the boiler, added a little air to the lifting bag on the shot and slowly ascended back up the line to our waiting RHIB and other divers. All agreed it was a cracking dive.

Having thanked the Long Room  and recovered our shot we returned to Mount Batten. After lunch and a change of cylinders our next dive was to be Tinker Shoal. This is a good rummage dive where in addition to natural flora and fauna many years of man-made rubbish is to be found. They say one man’s rubbish is another man’s treasure. Well so I find it is on Tinkers Shoal. 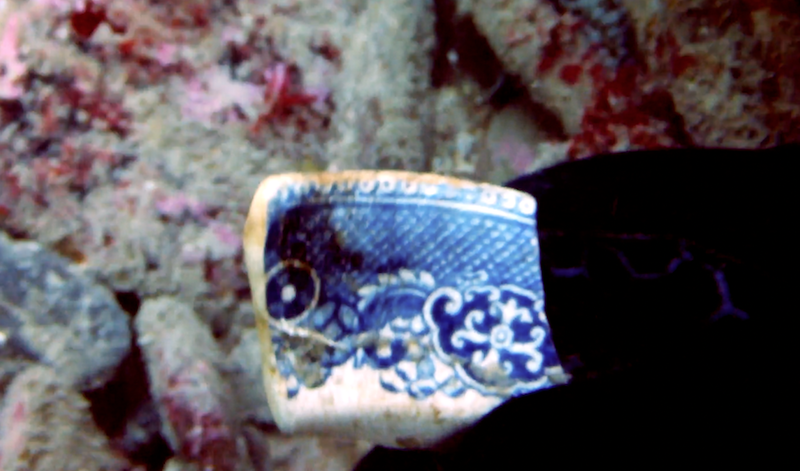 A sample of the ‘treasure’ to be found

As we made our way through the kelp covered gulleys we never knew what might turn up next, but this time we didn’t find anything particularly exciting. It was a nice dive though and fun to pass the odd mangled pieces of metal or broken china encountered to each other for closer scrutiny. After the dive Rich told me at first he wasn’t sure if I’d wanted him to keep the various items of junk/treasure I had passed him but he soon caught on 🙂

In summary, it was very summery and a good time was had by all! 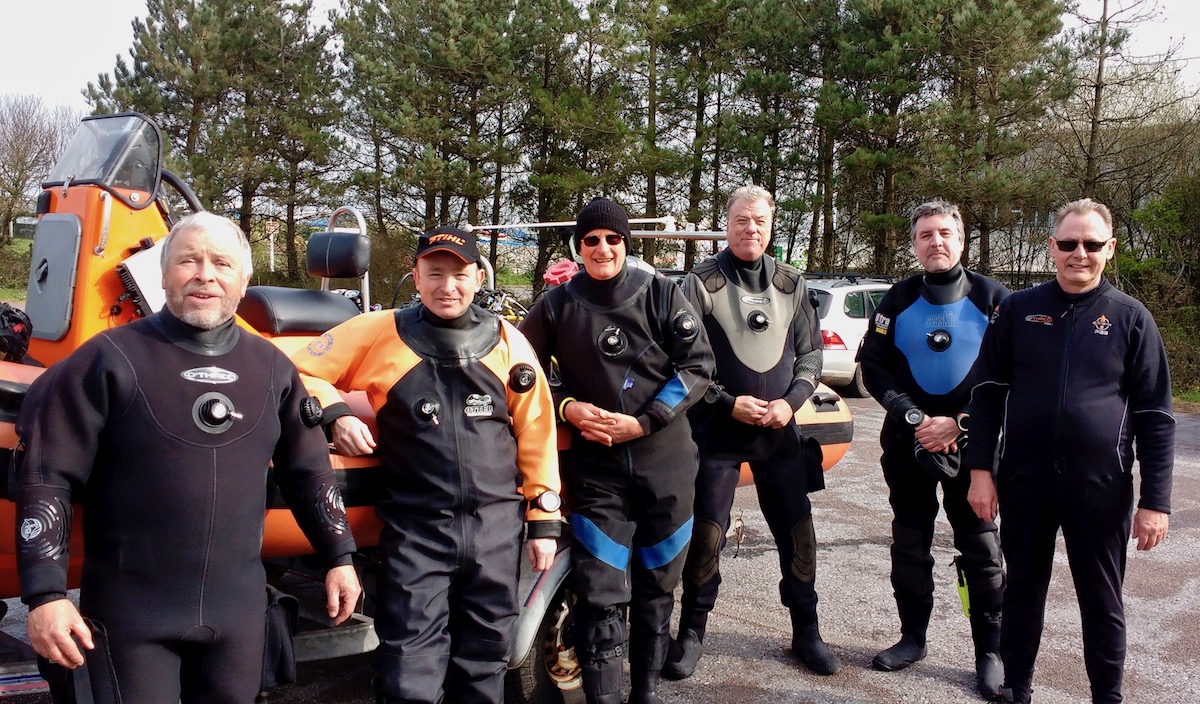 The intrepid crew (Tim, Rich, Geoff, Neil, Kevin, Chris H) – not pictured Chris L for whom a debt of thanks for coxing for the weekend is owed – thanks Chris!