After a week of mid 30s temperatures the mercury (fortunately) dropped for our weekend trip to Plymouth (whew!) – just low 20s & sunshine to cope with for us 6 divers (Tim, John, Geoff, Pete, Colin & myself) and loyal supporter & rambler, Jan 🙂

Our trusty boat, the Assault was duly retrieved from the compound with little trouble & kitted up we boarded after launching from the slip and the day truly got started. 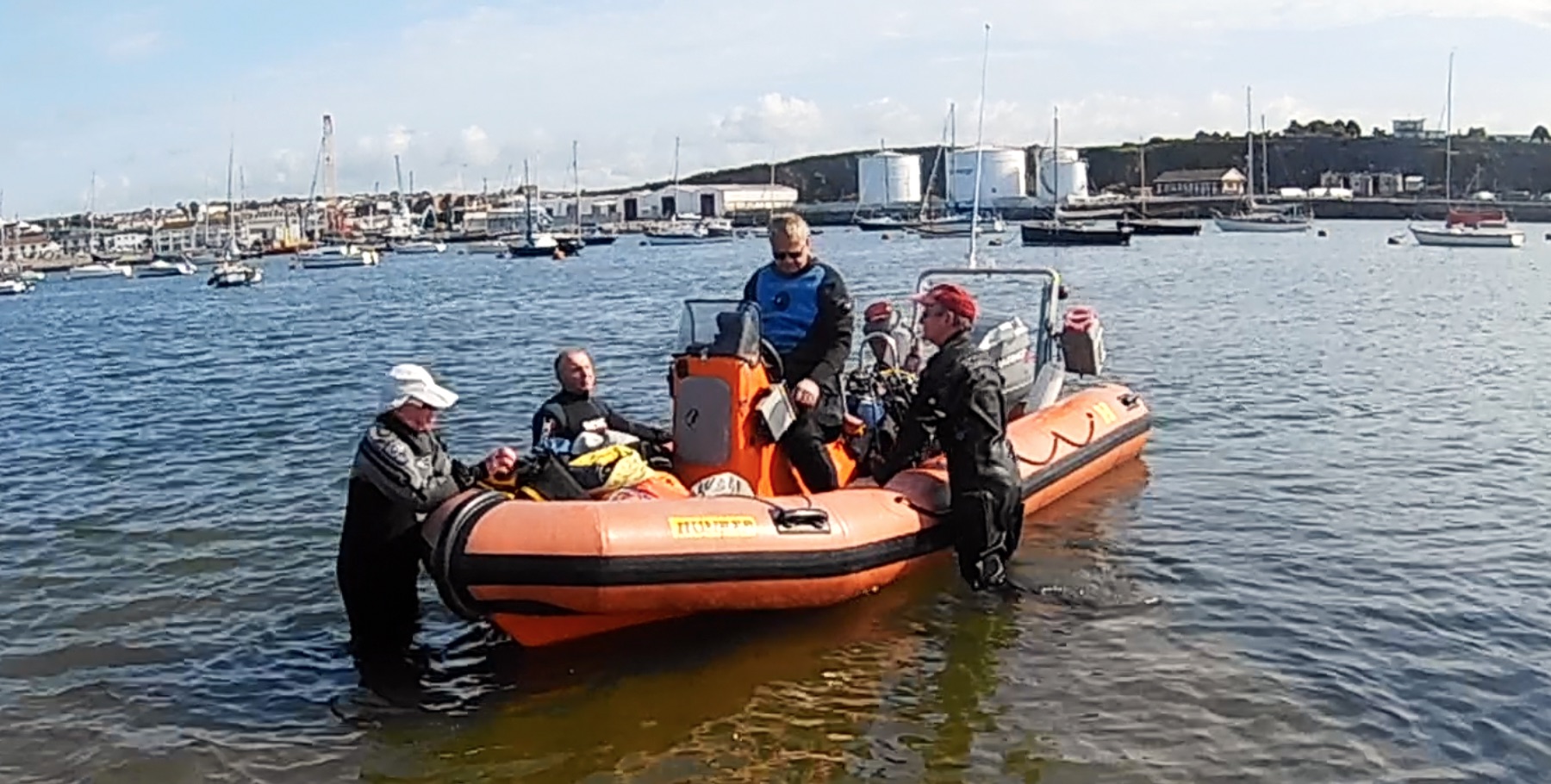 Getting the Assault ready to go

Even inside the breakwater it was a little choppy but fortunately no worse outside though a lazy undulating swell became our constant companion as Pete steered us towards our first rendezvous:  the James Eagan Layne – one of the most iconic & popular wrecks Plymouth has to offer & sure enough 2 other RHIBs were circling while a 3rd headed towards her nearby companion, the Scylla.

The other boats had no reports of visibility below so we took our chances, dropped the shot & in went Tim & Geoff with the agreement if they weren’t back in an hour it must be good ! We gave them all of 5 minutes before Colin & I followed & as we descended the line into a bed of kelp the viz settled at around 2 metres max – never mind we’d have to just look a little closer! 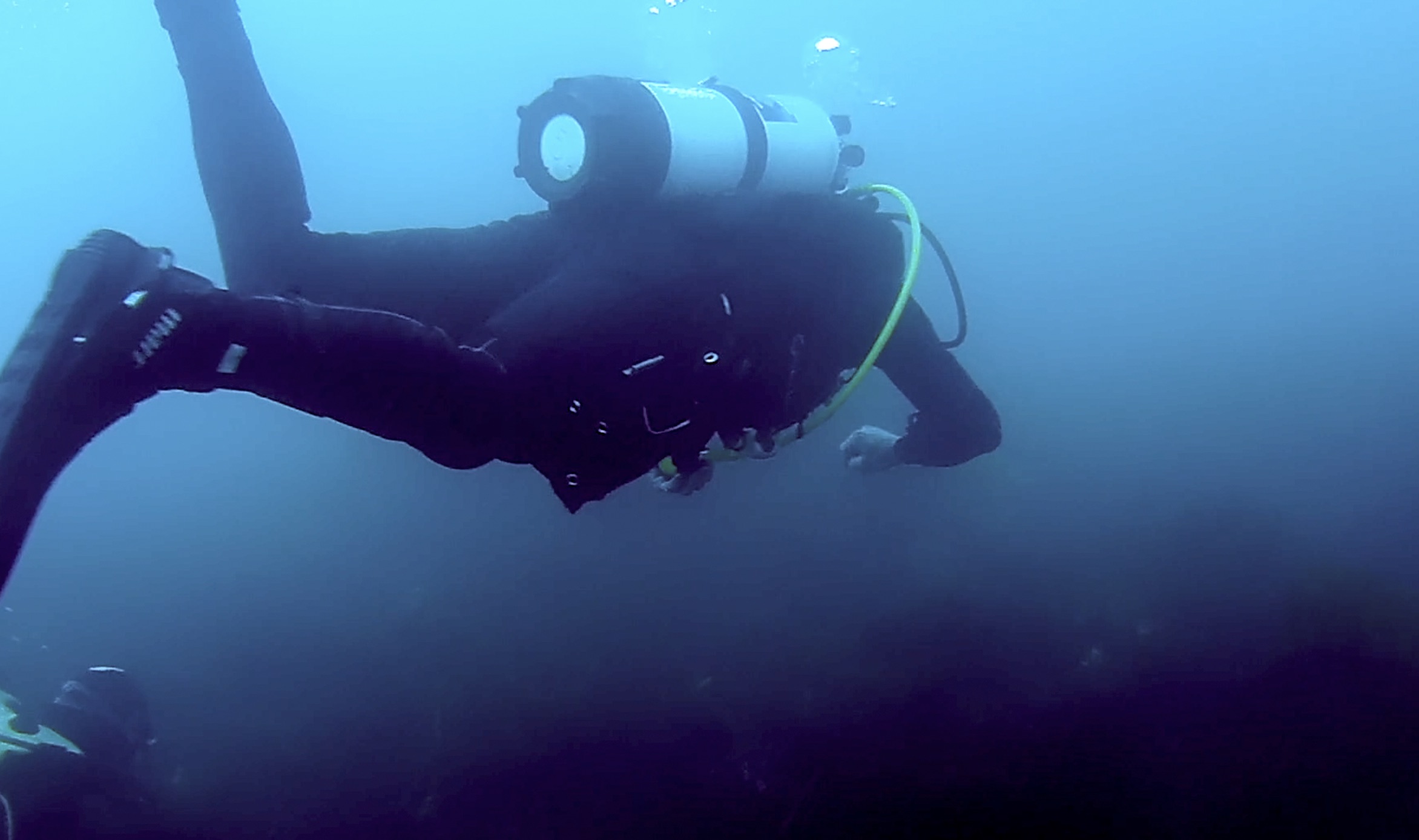 Visibility not the best

We rummaged among the huge mounds of crusted cargo, mostly unrecognisable from its original purpose or design, a smaller covered area held stacks of pipes & other oddments but with the low viz we didn’t chance entry.

Towards the bow we came across a bright blue Ling, a long bodied fish reminiscent of an eel (the first I’ve ever seen) which was completely unfazed by our appearance as it lazily wound its’ way among the wreckage before disappearing into a convenient opening.

Shoals of Bib were everywhere, broken by the occasional cruising Ballan or inquisitive Cuckoo wrasse, with the males making very close approaches. 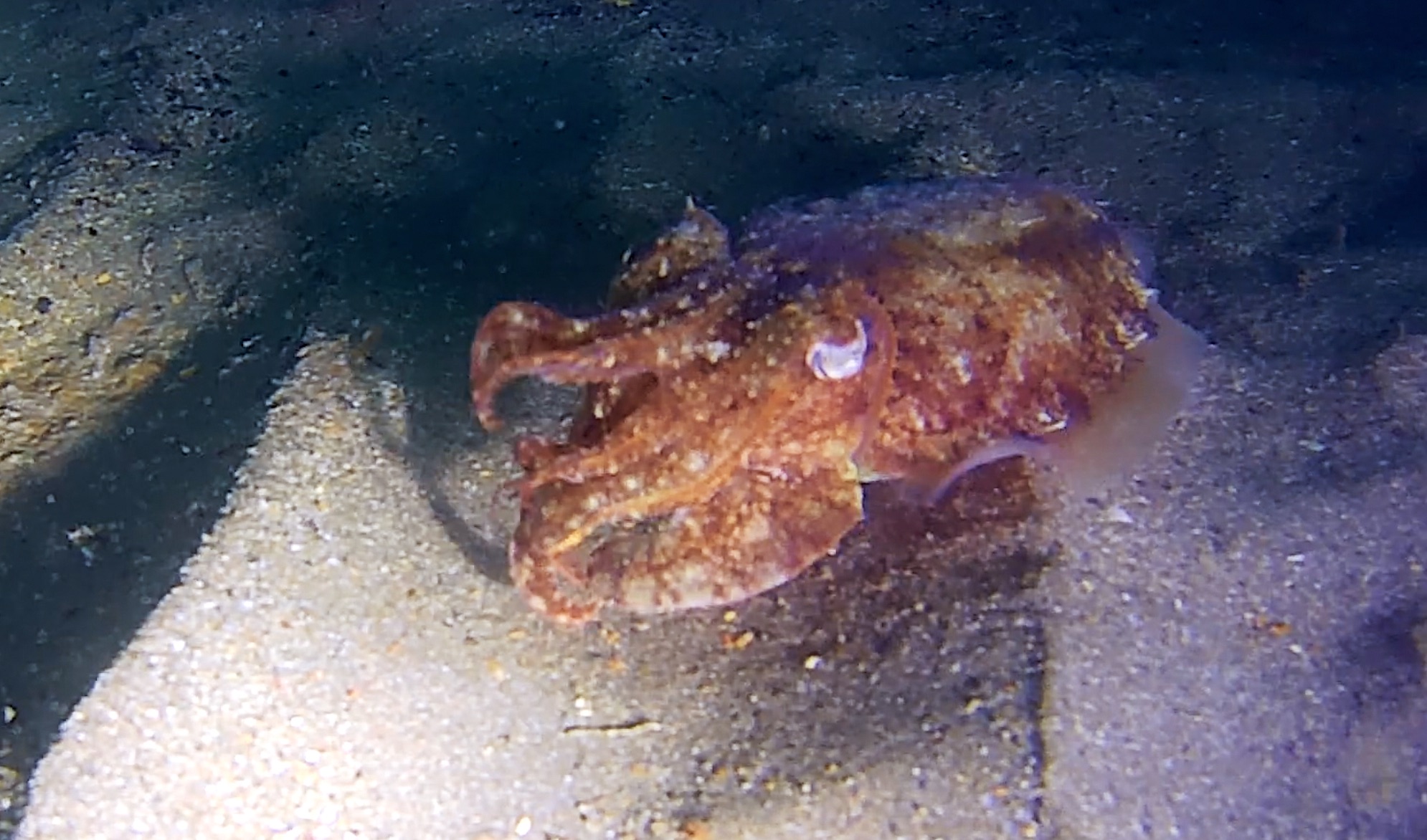 Baby cuttlefish (not too happy)

An excursion off the wreck and across a sandy bottom brought us to a baby cuttlefish that swam nonchalantly around. We continued but finding nothing further retraced our route past the cuttlefish but it was time to surface before we again reached the wreck so I deployed the Delayed Surface Marker Buoy & up we went.

Tim & Geoff had returned & were just off to get Pete & John so we had the chance to catch a few rays bobbing on the surface; on rejoining them we got reports of Congers, Spider-crabs & a wide variety of other fish.

Back to harbour for a bite of lunch & air fills before we set off again, minus John who had decided at 70-something years young to finish his RHIB diving on this trip.

The Mewstone (from the East)

As we bounced across the still choppy seas dodging the yachts & other craft we selected to tuck in east of the Mewstone for increased steadiness while kitting up before venturing further east & south to around 12-14 metres before Tim & Geoff tumbled in.

Pete, Colin & I chugged around the vicinity of their buoy & awaited their return, which was around 40 minutes later and after their recovery, de-kitting & debrief – ‘very pretty & relaxing’ they said we went to see for ourselves!

Taking Tim’s SMB (he had already inflated it so it seemed a shame not to) we dropped into kelp at 12m & then headed east. Not being deep it was pretty light, no need for torches. Overall visibility was a marked improvement on this morning at 5-6m although a little milky but it did give us a chance to appreciate the flourishing undersea landscape of colourful flowing seaweeds and snakelocks anemones that were interspersed with liberal helpings of yellow & purple sponges. Sea cucumbers, sea stars (spiny & regular) and swarms of tiny sunlit fishes. 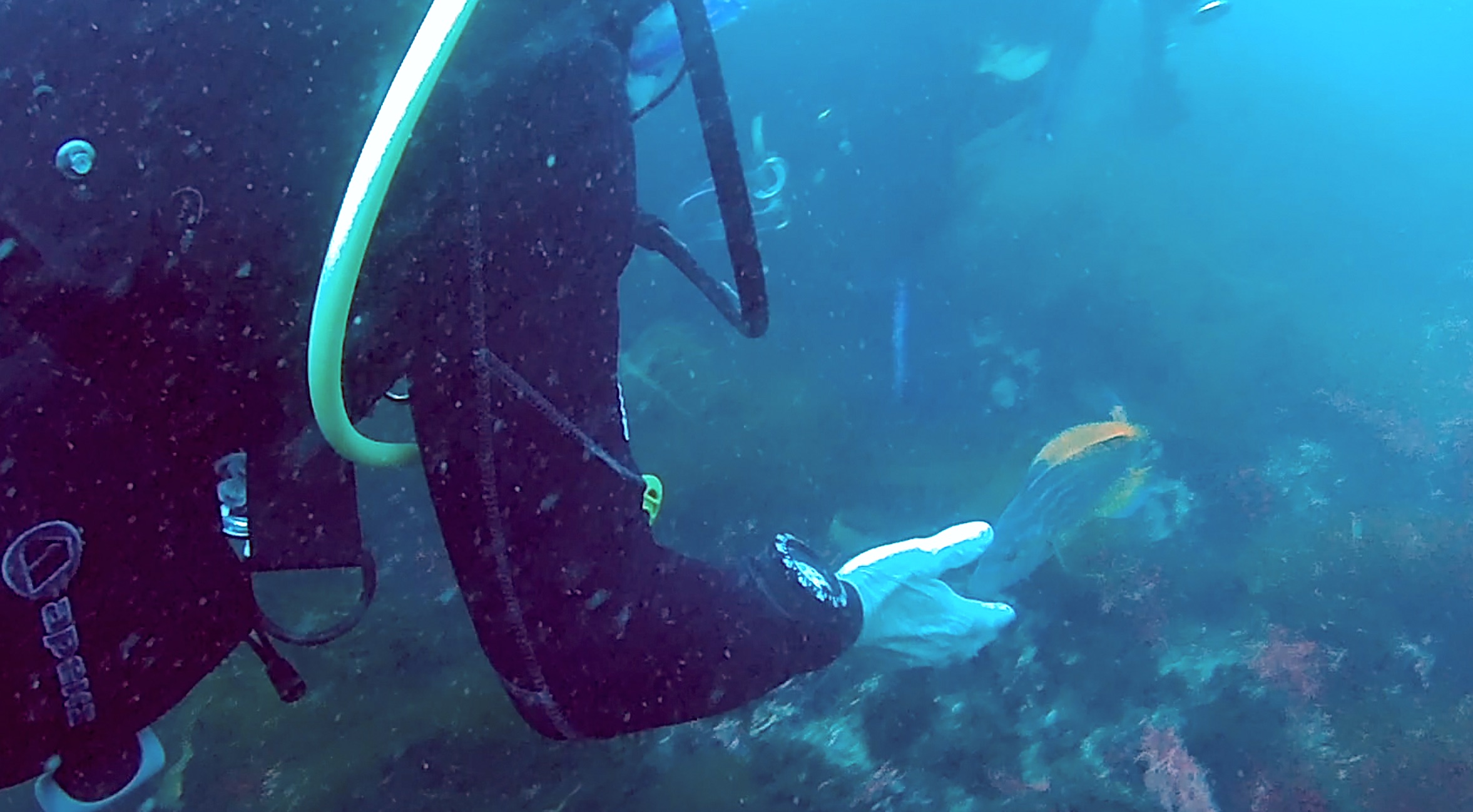 As we floated above the sea garden we frequently surprised Ballan & female Cuckoo wrasse while several male Cuckoo deigned to follow us & often surprise us in turn when we turned our heads to find one of them staring at us not a foot away! 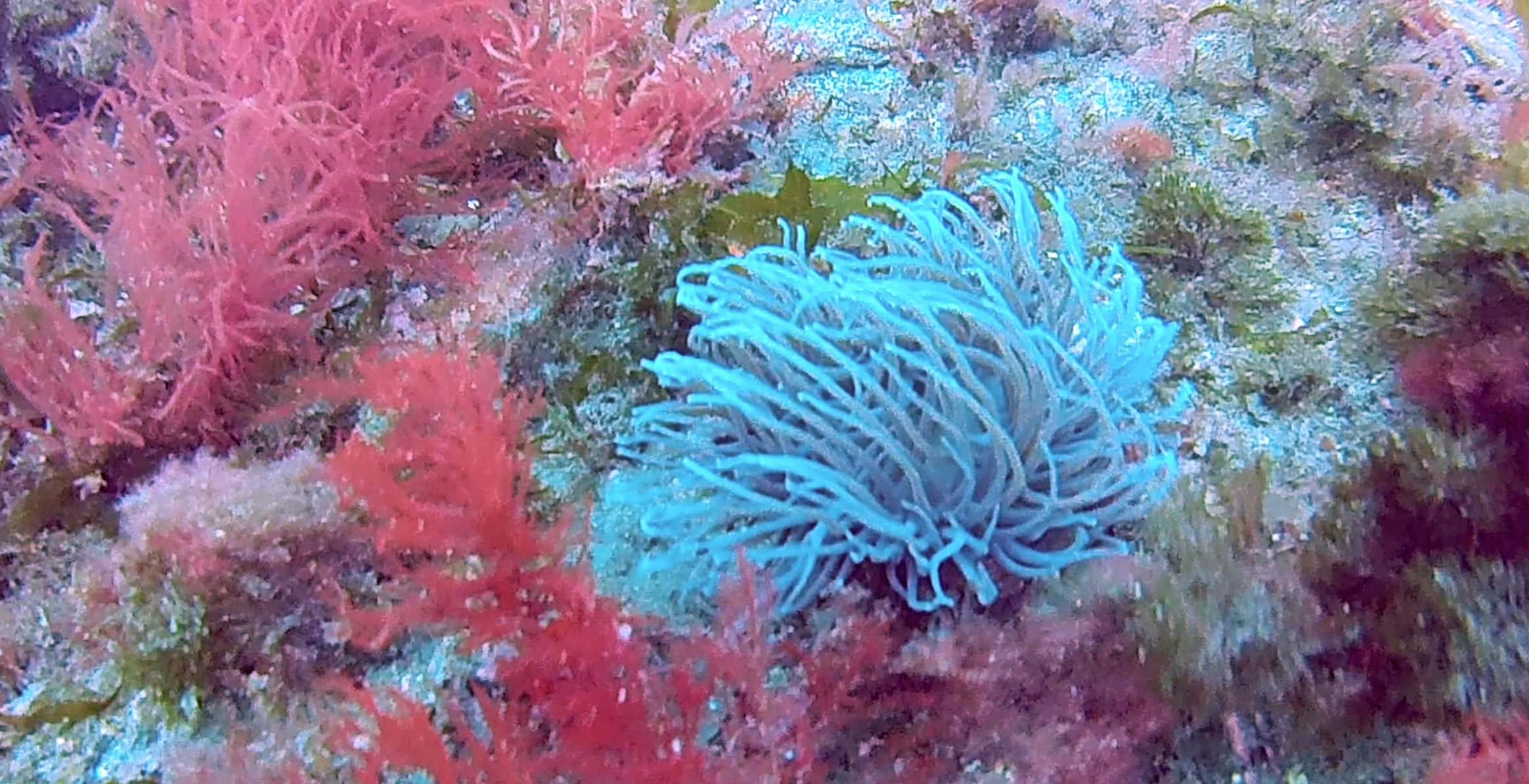 Areas of water-smoothed flat stones were broken by vertical rough rocky outcroppings like slates on their sides with urchins clinging to their faces. Colin spotted a tiny moon jellyfish tossed this way & that by the swell.

A large spider crab was briefly revealed and hidden amongst the seaweed as it slowly traversed the sea bed. 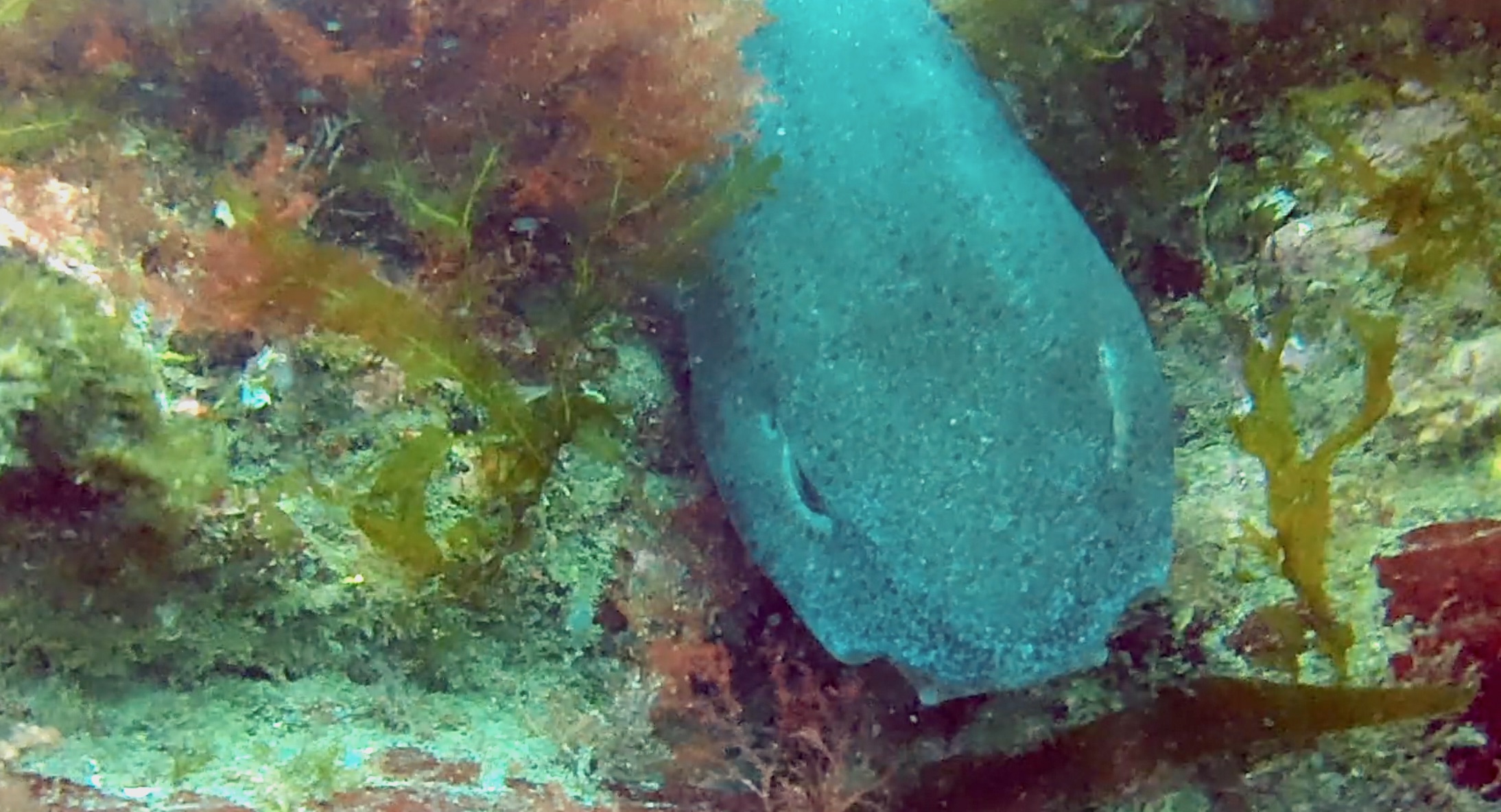 Catshark (a pretty big one, so only its head!)

Going over the edge of a rocky outcrop Colin indicated below & dropping down I spotted the large resting Catshark that had excited him so.

With our time up and all aboard it was a rapid trip back to try to get ready for our booked pub (The Ships Tavern in Elburton) for 7:30 – it didn’t look likely!

Tim went for the trailer while we went to the Mayflower barge for fuel & then de-kitting & off to Brixton camping & Caravanjng to pitch tents & make cursory ablutions.

We were meeting John & Jan at the pub so the 5 of us piled into my car & what do you know – we made it before they stopped serving! To be honest the landlord was very understanding & we tucked into a very welcome meal while regaling each other with diving (& other) stories of yore before retiring for the night.

The harbour looked so flat this morning Tim toyed with the idea of a trip to the Eddystone but reserved the final decision until we were past the Breakwater – sound judgement as the swell from yesterday was still present which along with choppy waves would have made for a very uncomfortable 28 mile round-trip!

So it was that under a perfect azure sky we headed for the Scylla and as we approached it appeared several other dive boats had the same idea with two hard-boats from Indeep, another (Endeavour) & a RHIB, we also saw TopGun over at the James Eagan Layne.

After dropping the shot Pete, Colin & I went in first this time. I had some leaky mask trouble on the way down but it settled at the bottom & we set off. Colin in the lead with Pete & I in tow. Our journey took us round the full circumference of the ship with Colin & Pete closely examining the railings & hull for tiny critters while I explored a few of the companionways in parallel. A few Ballan wrasse cruised past while a way off the odd Cod eyed us suspiciously. Visibility wasn’t up to the Mewstone ledges but was an acceptable 3 metres or so. 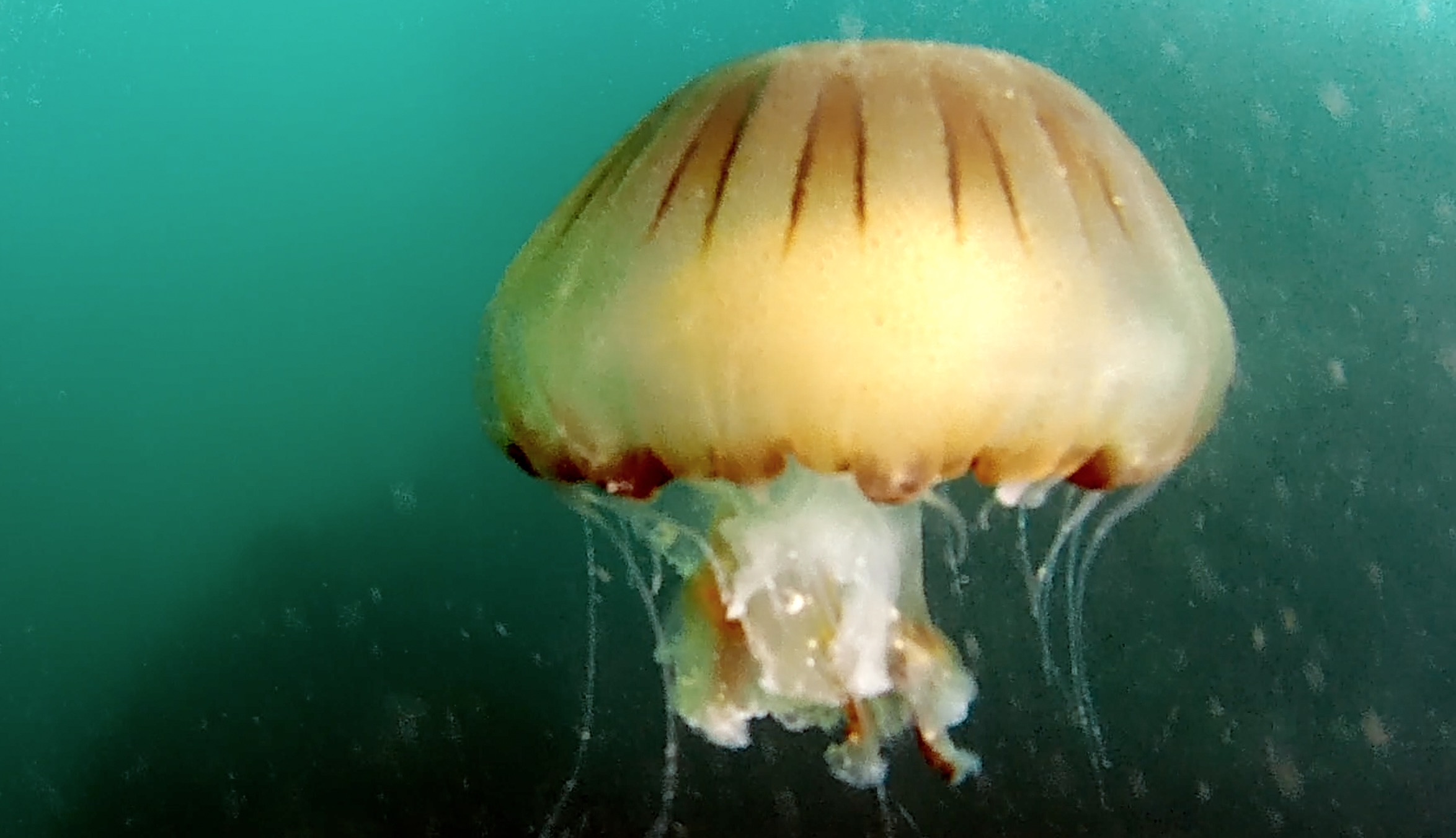 As we neared the end of the dive I spotted a small Compass jellyfish that I immortalised on video before it was time to ascend & for Tim & Geoff to take a turn.

It had clouded over in our absence but stayed dry while we cruised around during the inevitable >1 hour dive – we are talking Tim here!   Both he & Geoff enjoyed their lengthy exploration & after stowing their kit Pete steered us back to harbour. We agreed to finish the weekend there so as to not get back too late.

After refuelling we recovered & washed the boat, unloaded the gear, changed & stowed the boat in the compound. There was nothing for it then but a relaxing cuppa & a reminisce about the weekend.

Our thanks to John and his outsourced sidekick Tim for organising the event, everyone for coming & despite the bells of doom being sounded over the viz, while not the best we all agreed the trip had been worth it!