‘This was our first major diving excursion of 2019 & so to provide a flavour of the goings on the dive report includes the perspectives of a number of those who attended in their own words (and in many cases their own photos) with some further commentary from myself. Thank you everyone for your contributions, you make it all worthwhile’ – Kevin

Diving out of Plymouth on one of our club boats with overnight accommodation at Venn Farm (https://www.brixton-caravan-camping-park.co.uk/ ) was the order of the day, this is how it happened…

Geoff, Neil, Tim & myself formed the advance party with Claire & Luke arriving later (as it turned out much later after a 4-5 hour journey from Bristol 🙁 that’s Bank holidays for you!)

Boat loaded & launched we headed across relatively calm seas in the bright Easter sunshine – a glorious day weather-wise, now we were to find what the diving was like

With boats already around the JEL & Scylla (sitting beside her not far away) we were granted use of an existing shot saving us the effort of deploying one – result! 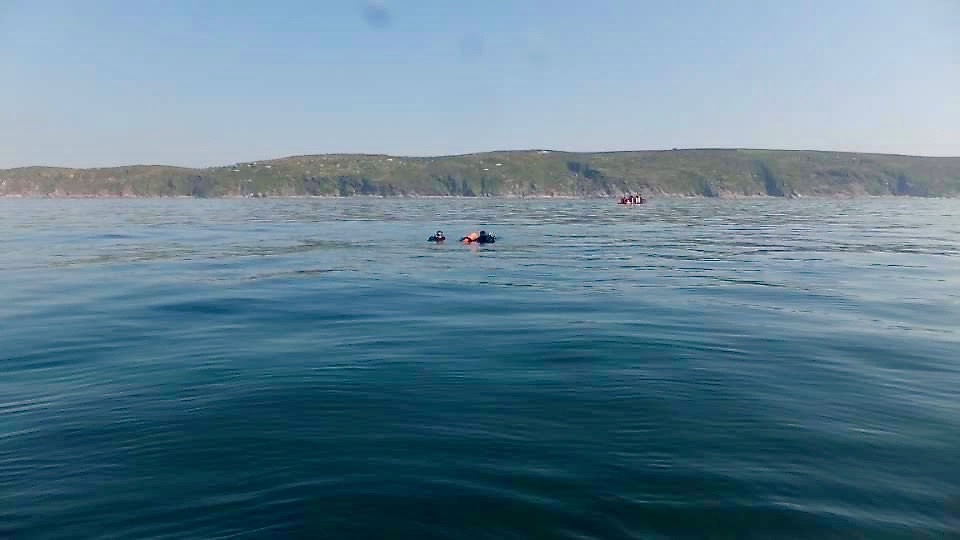 Tim & Neil kicked things off with a respectable 45 minute dive but indicated visibility was 2-3 metres at best & Tim expressed surprise at how much had changed since he’d last dived here. With this in mind Geoff & I hit the water & descended. A chilly 10 degrees greeted us as we reached the wreck & Tim was correct, this wasn’t the scene I expected! A huge mechanical contraption that looked like the innards of a giant clock carved from stone confronted us!. We continued and came across spider crabs hiding at the base of huge overhead davits while Geoff spotted a shy Blenny in a small overhang. Further exploration revealed part of the hold (& more spider crabs) & the huge stern post on the bottom. 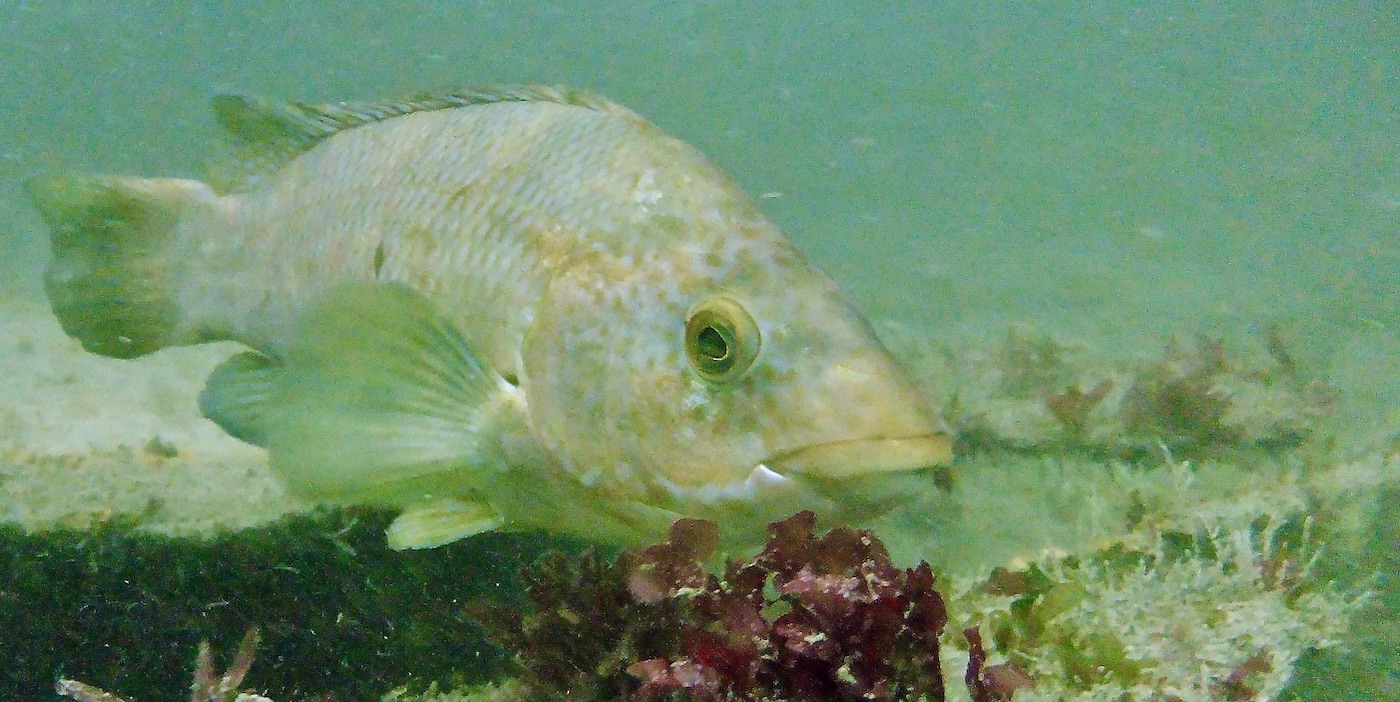 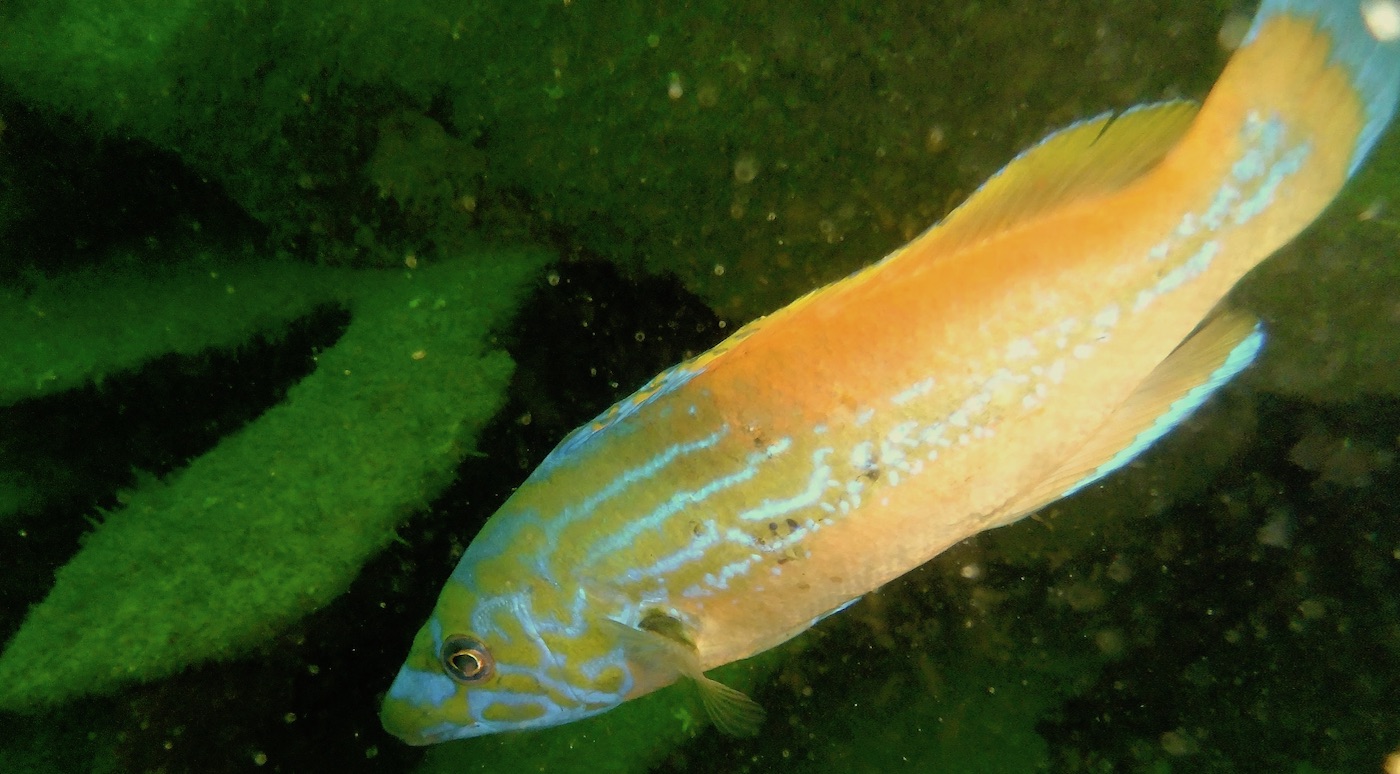 All the while curious wrasse of various types circled us and occasionally came within ‘petting’ distance ?. 40 minutes and it was time to ascend, Geoff deployed his DSMB which I filled & we headed up. Returning to the pontoon was interesting as it was low-water on springs (and I mean really low water!) 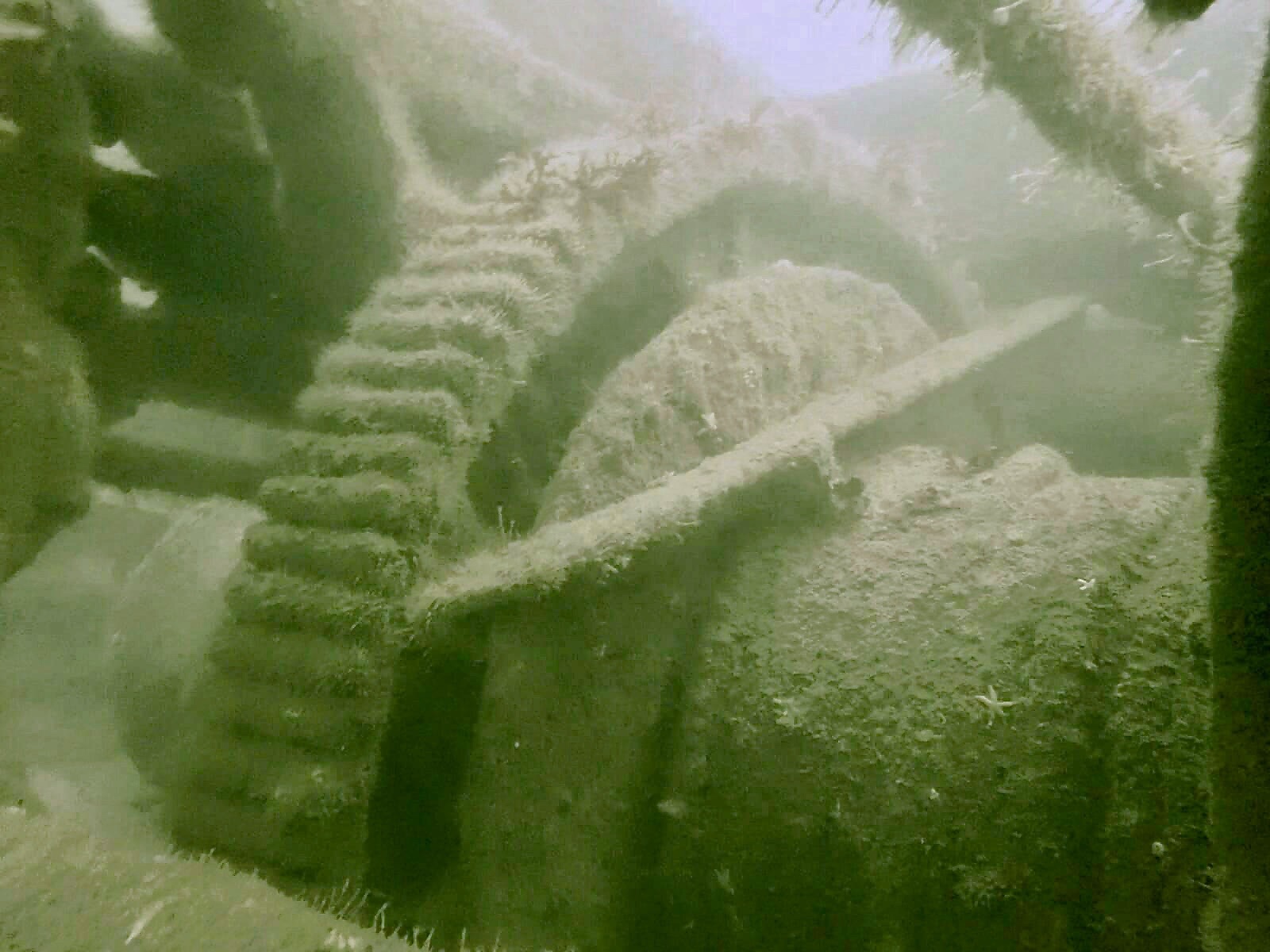 Found on the stern section of the James Eagan Layne

The answer to the changed landscape below was because the borrowed shot was on the stern section, which is separated from the part we normally dive so a ‘first’ for many of us!

A break for lunch & cylinder refills at In Deep & we boarded a boat now actually floating rather than resting on the bottom and headed initially for the Glen Strathallan but seeing two other boats already there we opted instead round to the left of the Mewstone. 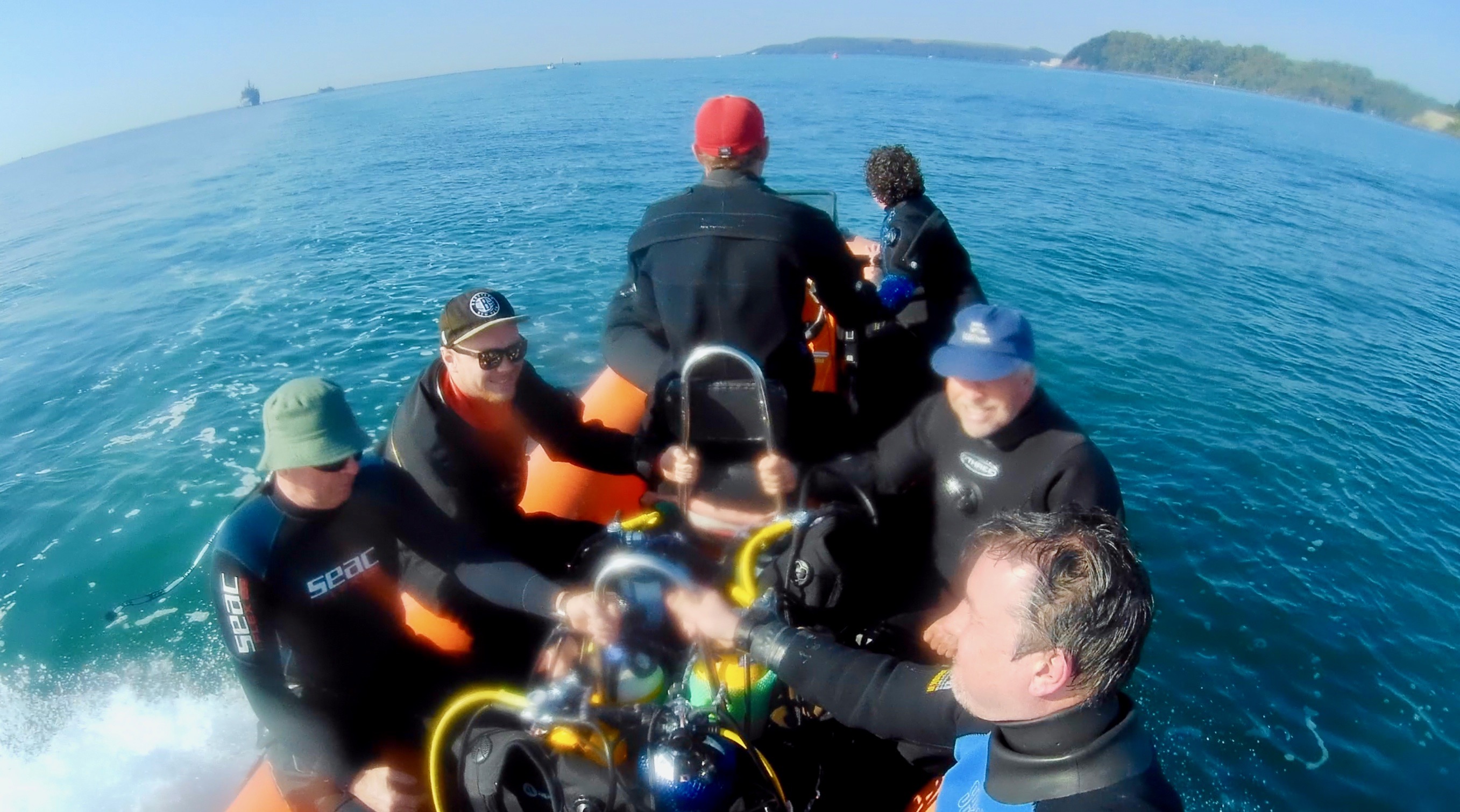 Tim & Neil went in first while Geoff & I soaked up the sun & tried not to cook too much – covered in rubber in 23 degrees & bright sunshine is not a recipe for comfort, but hey, blue skies & calm seas, you can’t have it all!
45 minutes later Geoff & I plunged into a very refreshing (10-11°C) sea & descended – to 23.5 metres! – surprising as the last echo sounder we’d seen was 17.5!
The explanation for the discrepancy came when after aligning ourselves NNE towards the Mewstone we set off in average visibility over the sandy bottom with a rocky ridge to our right and almost immediately we picked up speed as the current took us for a magical mystery tour across ridges and down channels while we focused on making sure we knew what was coming & didn’t collide with it – exhilarating!
Our companions were the ever present wrasse with the occasional spider & edible crab. Sea cucumbers littered the bottom while tiny starfish clung to the rocky outcrops

During a very nice meal last night at the Foxhound (http://www.foxhoundinn.co.uk/) we did a little dive planning & with Neil leaving us & Colin, Harley, Claire & Luke joining the party it was all change.
Geoff had so much fun driving the boat on Friday he offered to cox which made us an even 6 divers: Colin & I first followed by Tim & Harley and then Claire & Luke. 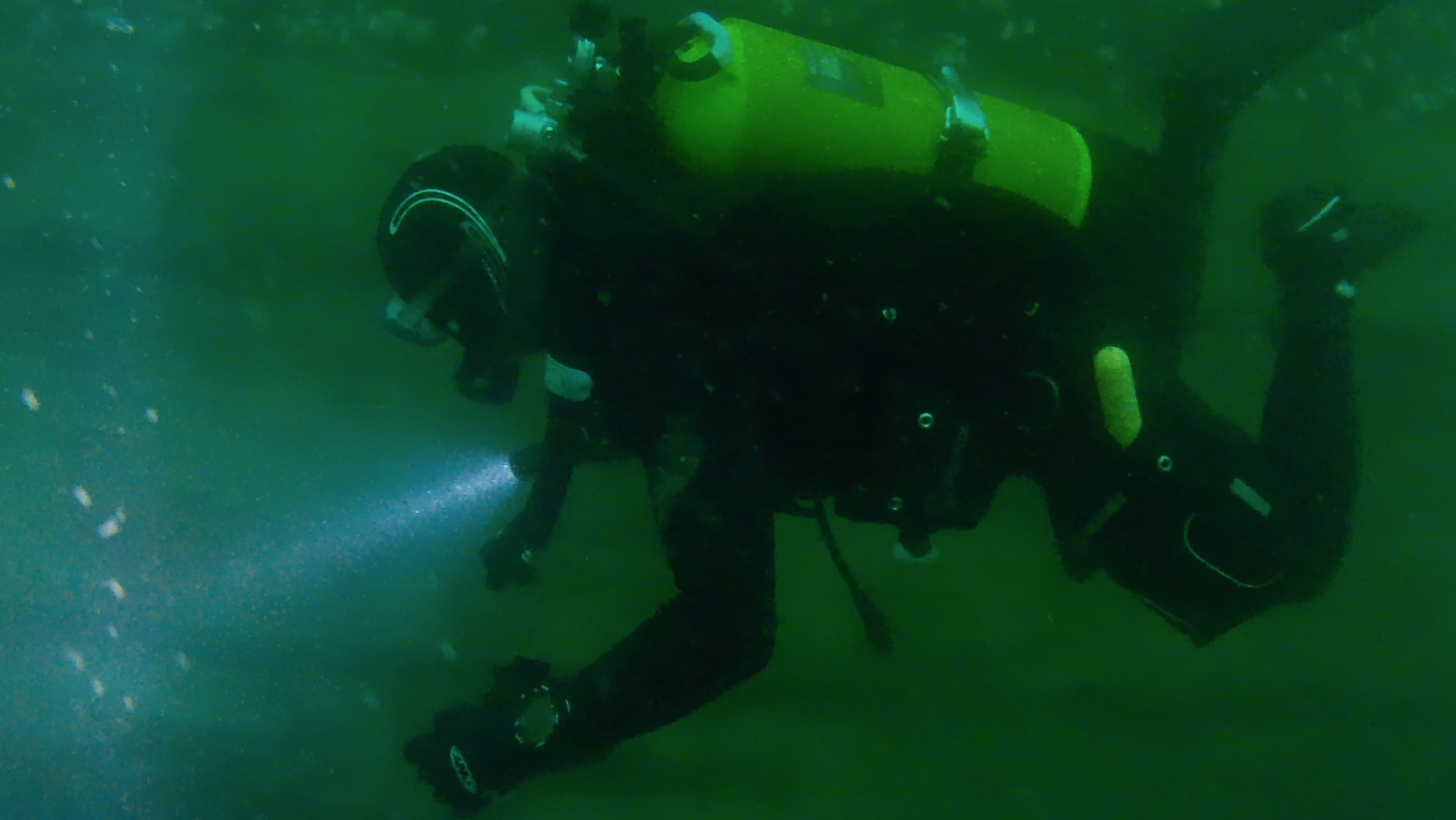 Colin in exploration mode on the Scylla

Colin & I went down the shot, got oriented & then I led the way for Colin’s first dive on the Scylla. Reaching the bow we dropped over to the bottom and with visibility at 4-5 metres we could appreciate the full majesty of it. We then worked our way up the side peering in various hatches & admiring the profusion of dead men’s fingers.
We then followed the companionway until the exit & then aimed for the stern, along the way seeing a few bunches of red fingers, a more colourful & rarer sight than dead men’s fingers.
At the stern we went over, dropped down again & then went back up along the side to the other companionway then ascended to the bridge, swam over the hold and then called it – a real whistle-stop!
Above the sea was still flat calm & Claire & Luke helped us in & then went in themselves to join Tim & Harley 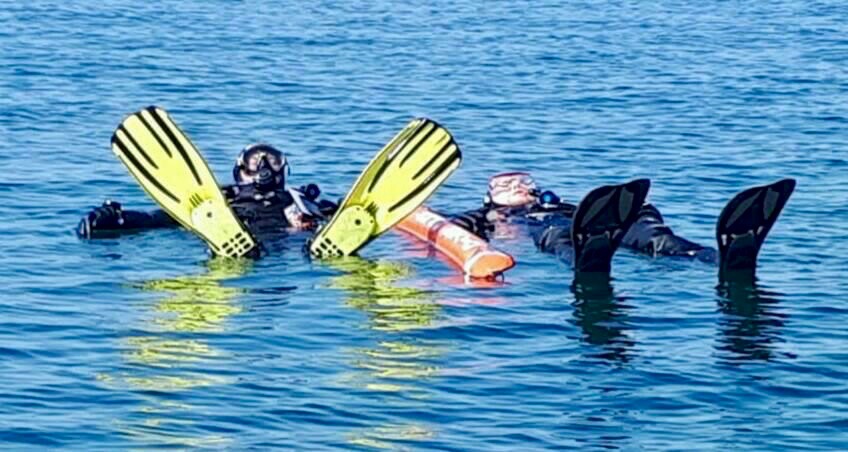 Tim & Harley relaxing after their dive

We shot what we believed to be the wreck & Geoff & I duly tumbled in to take a look. The shot was fine, sitting on a clean sandy bottom in reasonable visibility & nearby there were indeed traces of wreckage. However our luck was not to last & we found no more – only lots of kelp broken by the occasional sandy flat. We initiated a search but to no avail & cancelled after 25 minutes.

Tim & Colin went in with the plan to conduct a search & Claire & Luke shorty after. Tim & Colin’s search area seemed to grow exponentially while Claire & Luke seemed to be going in a completely different direction. The end result was that none of them found the boiler- but all enjoyed a good dive of wildlife spotting with the odd wreck fragment.

We spent the evening in the very amenable Foxhound with Geoff, Theresa, Harley & Jess joining us this time

Another day of sunshine & calm seas took us to 2 other dive boats on the site & we again got to borrow a shot, this time on the rest of the ship. Claire & I were last in after Geoff & Luke and Sue & Tamara (all joining us today & Tamara for her first non-quarry dive – she was so excited!). Tim opted for us all to go in & he’d mind the boat so we headed down through very milky visibility that didn’t really get any better than 2-3 metres at best. 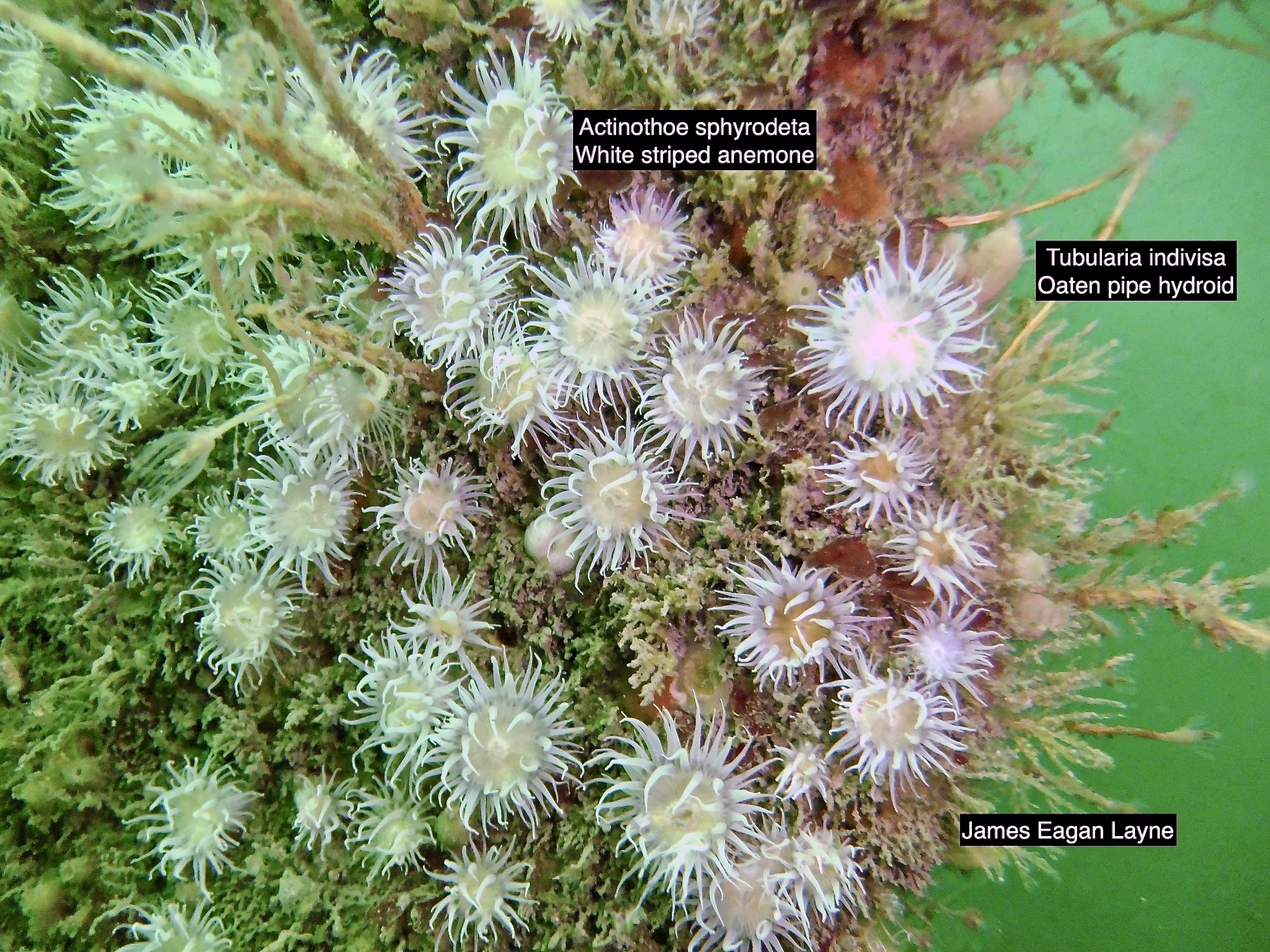 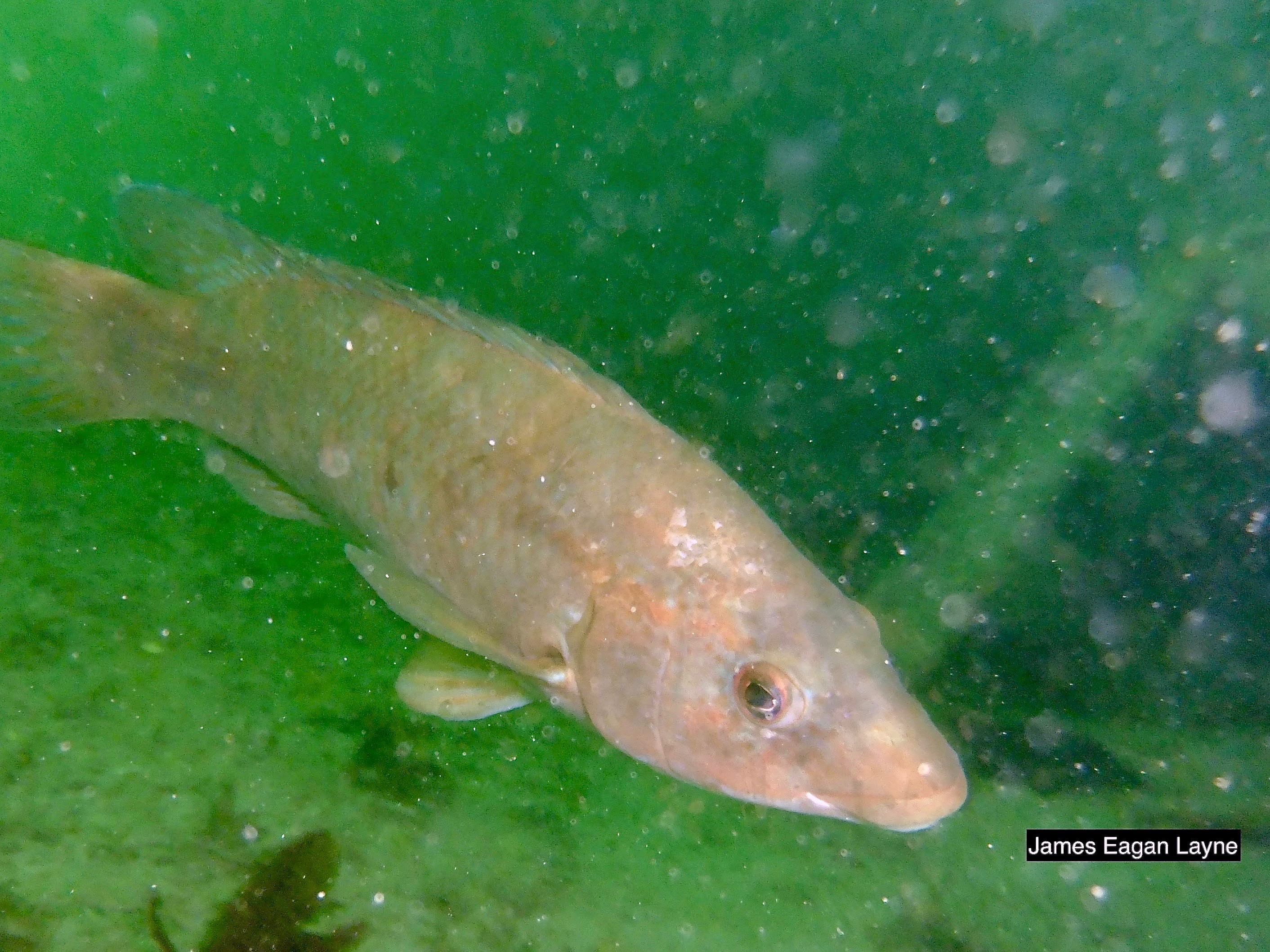 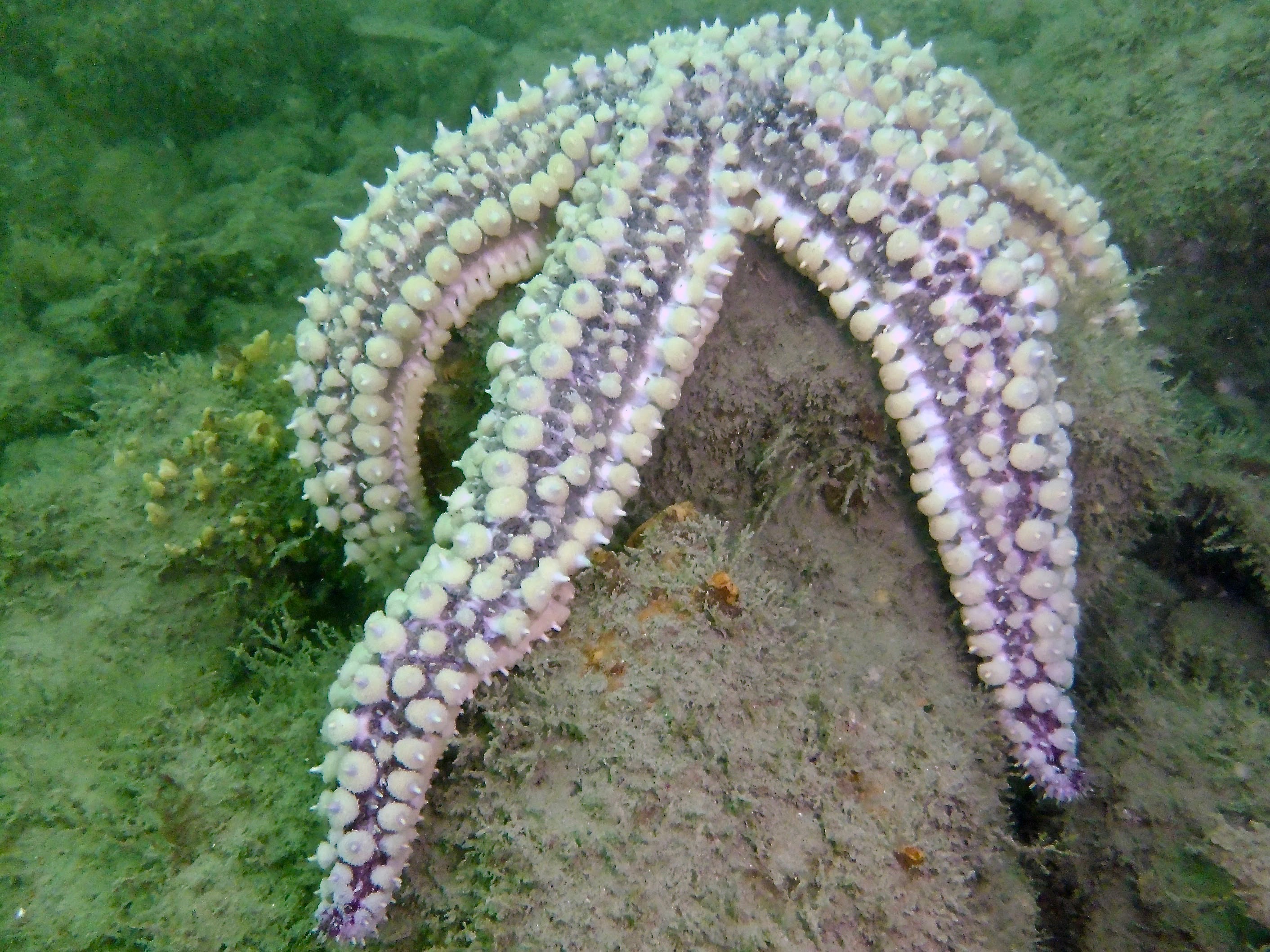 Claire & I swam across the deck & over the edge to the bottom & then along the side, which was covered in dead mans’ fingers, with the metal broken by the occasional hatch or missing plate, venturing inside the hull we rummaged around amongst various strange looking items of cargo before I opted to veer off & explore some of the more scattered remains on the sandy sea bed. As with the stern, we came across items I (& likely Claire, who hadn’t dived the wreck for many a year) had never seen before. The occasional starfish adorned the rusting metal & wrasse weaved in & out. I must admit in my search for more wreckage across the sea bed there were moments when I thought we’d lost the wreck & then another shadow would loom ahead & we’d be back amongst it – the JEL is a seriously scattered wreck!  35 minutes in & it was time to call it so we headed up. 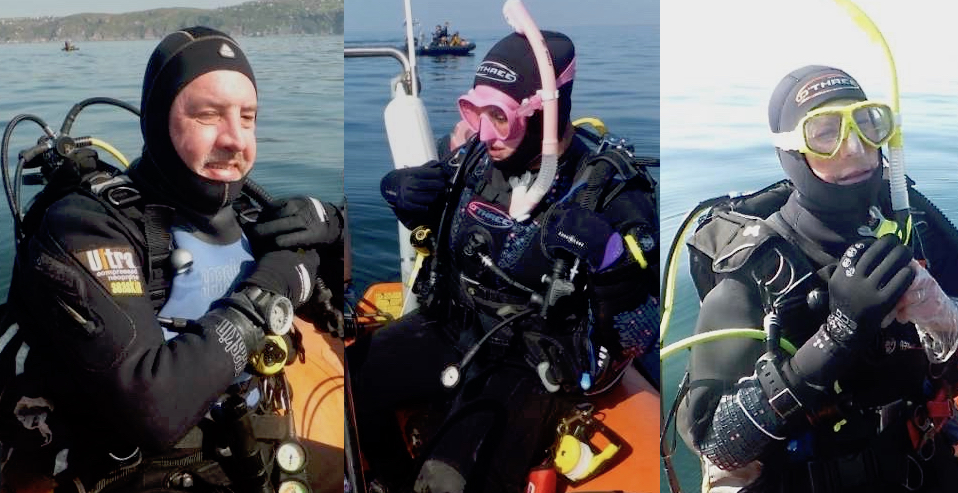 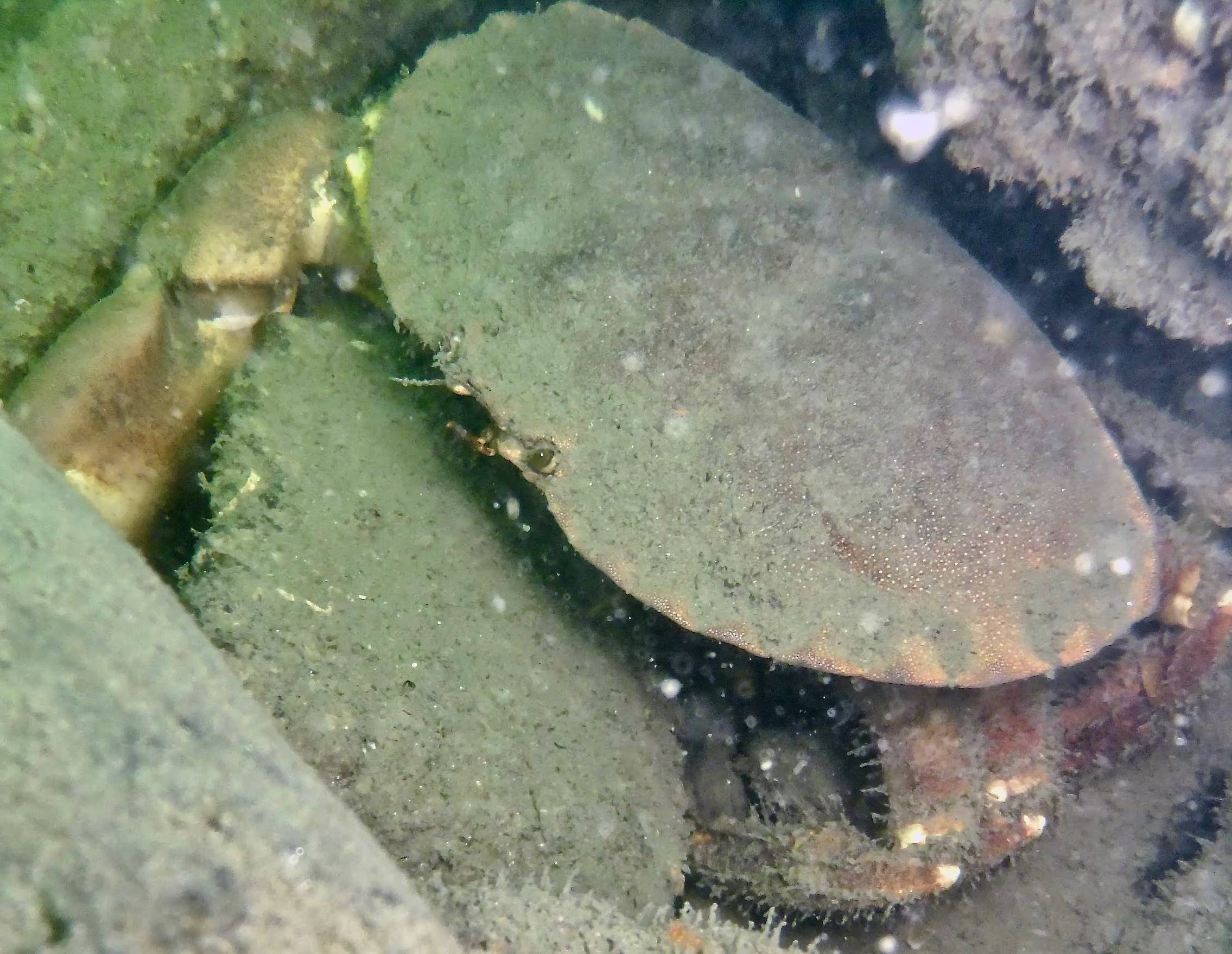 Luke & Claire: ‘an unexpectedly great last dive on the Breakwater Fort, we saw a huge lobster, prawns, a very large spider crab and a conger eel all lurking under the rubble.’

Sue & Tamara: ‘we descended by the fort to begin the second dive.  The visibility was not very good, but there is so much life down there.  These are some of the things we observed: Fan worms, Tompot blenny, small lobster, either ling or conger eel in hiding along with lots of common prawns, an angler fish who looked too cold to bother moving, and the hugest, scariest Spiny spider crab I’ve ever seen.  I managed to photograph a meek small one.’ 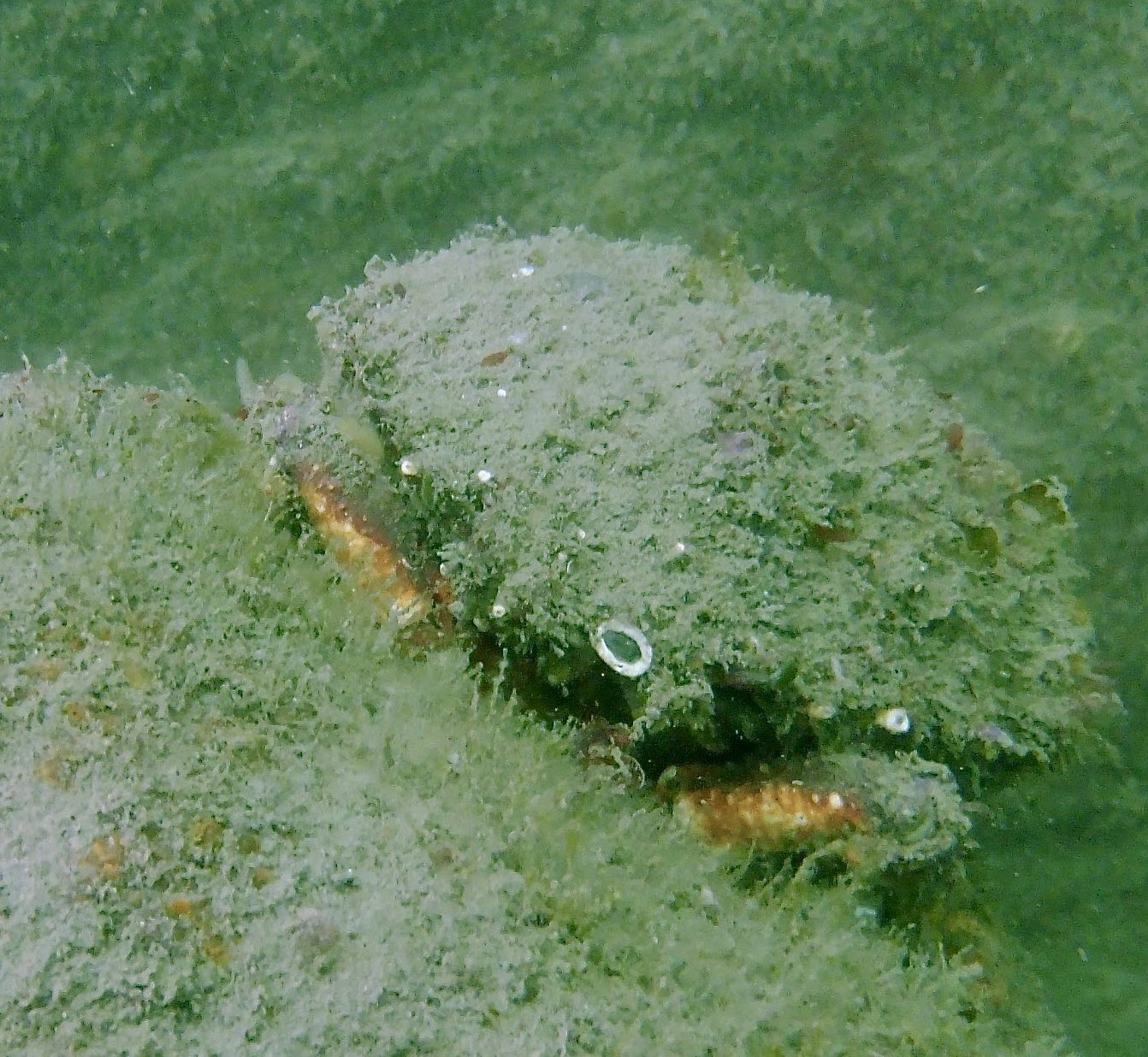 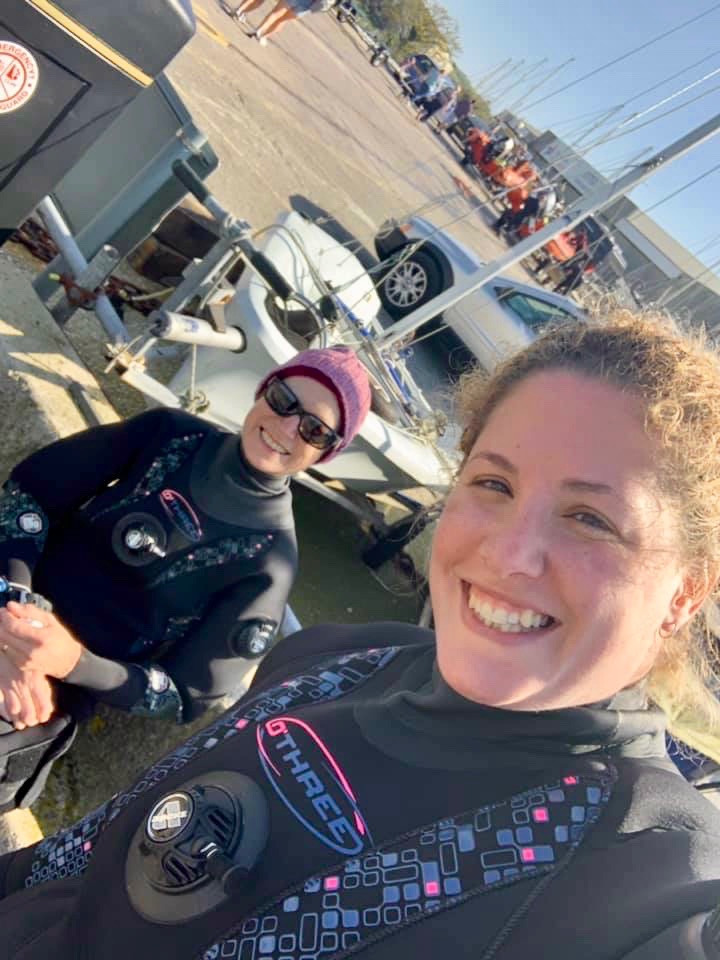 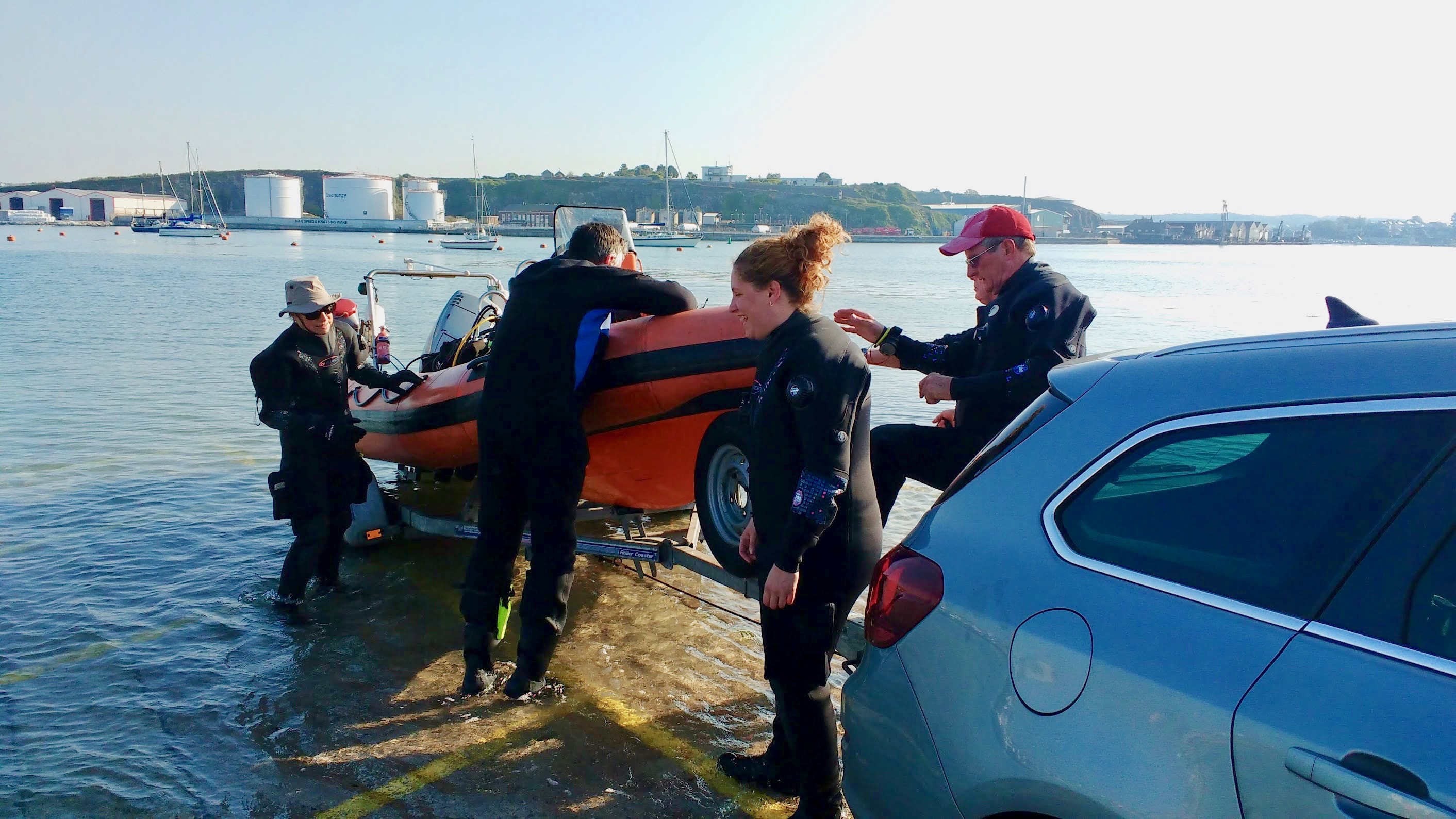 And a final few words from everyone’s favourite Diving Officer:-

Tim: ‘I’m delighted to report a highly successful weekend of diving and first RHIB diving trip of the year.In all the time I’ve been diving I can’t remember better weather at Easter.’ Some of the highlight firsts for this trip included:

Thanks to Rob and Pete for getting the boat and trailer ready. Thanks to Sue for the delicious cake and ginger nuts.
Thanks to the coxes and thanks to my assistant Dive Manager Claire, for her help in organising this event to round off her Dive Leader training.
It was nice to encounter a few past members over the weekend. Mike and Sheila on the campsite in their van and Simon and Jo enjoying the sea out in their kayaks.
The year is off to a great start!