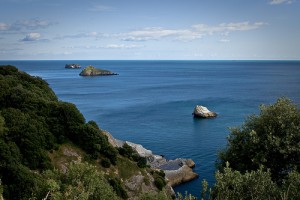 24th April, 2004: [Ed – Dolphins, Seals, Whatever next!] The trouble with arranging for good weather, good vis, superb wrecks and reefs and dolphins on a diving weekend is that it becomes expected of you. As a sequel to Plymouth our weekend at Teignmouth didn’t quite come up to expectations or run quite so smoothly but ‘a good time was had by most’ is probably the best way to sum it up. The weather couldn’t have been better, but the vis in comparison was very disappointing. I didn’t manage dolphins, but I did arrange for us to see seals on the Ore Stone.

Saturday was to be experimental the intention being to dive the places where you wouldn’t want to waste a more expensive hard-boat trip doing. The ‘Exeters’ reef was chosen as a site none of us had been to before. Well I enjoyed it, but I’m the sort of freak who enjoys his diving wherever. Yes the bottom was a bit drab and silty, but the fan and rose-corals were some of the best I’ve seen. Life on the bottom was prolific and as one of our party put it, “Everything moved”.

The 2nd dive was to have been Watcombe Caves but the site described to me by a local skipper (4m on our sounder) did not match the site at 15m described in Dive South Devon. Out of desperation we even resorted to phoning a member back in Bristol to scour the web for a more reliable GPS position. Talk about interactive, I had a mobile held to my ear as we relayed and received positions to steer us to more promising locations. I trust such use of a hand-held mobile is not illegal on a boat as we had two coppers with us, one of which was the owner of the phone and the other holding it to my ear. In the end we ditched the ‘experiment’ and opted for a safe bet of the Ore Stone where all had a cracking drift dive.

Sunday started well enough. Gorgeous weather. We cooked and consumed our bacon butties, slurped our tea, had out tent down, cars packed, boats uncovered and hitched and were away by 8:05am in good time to fuel the boats and be on the slip as planned for 8:30am to meet our divers coming down for the day.

The 1st problem was the local Shell garage wasn’t open until 9:00am and the boats needed fuelling – doh! The 2nd and more debilitating problem was that because of the late finish those without a second cylinder didn’t have air – doh! “Never mind; the dive centre is sure to be open soon, drop the bottles off there now and we’ll launch the boats and pick them up on our way past”. At 10:00am the dive centre eventually opened. So much for our early start.

Now well behind schedule things picked up from that point. The first dive on the Galacia though in particularly crap vis (1.5m) was a good rummage enjoyed by all.

The second, with the aid of a non-diving cox was to be a quick blast out to the Ore Stone, all down together, and quick blast back. This site was chosen as it had been such a good one the day before and anyway we had some new people on the trip.

I gave our shore party an estimated time of return but failed to take into account that one greedy pair would go for the hour! I have decided in future to charge their diving by the minute 😉 Fair play, I admire anyone who can endure an hour of diving in the UK in April.

Safe Diving and here’s looking forward to the next one!