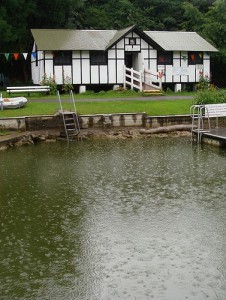 All I can say post the event is well done to these brave souls who dived Henleaze lake. We were told that the viz was a metre but as Simon said I think they left the “milli” out. At the bottom we could only feel the sludge and any contact resulted in a cloud of silt which caused a total blackout. Despite this we recovered two motorbike frames, part of a cylinder block and a very large fishkeep with a fish in it.

Bob Abbott took several photos to verify the catch but I think we will never turn our noses up at Vobster/Chepstow/Cromhall again!

We received a nice email from Ross Harley of Henleaze:-

Mike,
We are very grateful to you and your colleagues for getting the rubbish out of the lake.

I’m sorry that the lack of visibility made it a poor experience – I didn’t realise quite how bad we were compared to other sites. We will probably follow up on the sites you have told us about to compare notes and find out how they achieve their clarity.

As Andrew probably told you, we are in the process of getting advice from fresh water habitat experts as to how to improve the clarity of our water. Preliminary indications are that it is going to involve taking quite a few fish out and that it will be a fairly long job. Maybe, once we’ve got that sorted out you will come back for a better experience.

In the meantime, thanks again and please pass on our thanks to your colleagues.
Ross

Don’t take it too seriously Ross, he was only joking, and they actually had an interesting dive and couldn’t stop talking about it afterwards, and are now even proposing black-out zero viz dives in the pool, just for some practice. Ed.