24th January, 2015 : Initially to be a Brixham dive, the weather didn’t play ball so it was a fallback to Cromhall.

It was a decidedly cool but sunny Saturday morning when Sue R., Tim, Chris H., Ian & myself duly turned up at the shipping container that serves as an office to grab our air fills & meander round the pot-holy ’road’ to the shore entry.

With significantly more water than November (when I was last here) – many picnic benches were now islands, a big plus was the number of other divers was inversely proportional to the amount of water – just two! 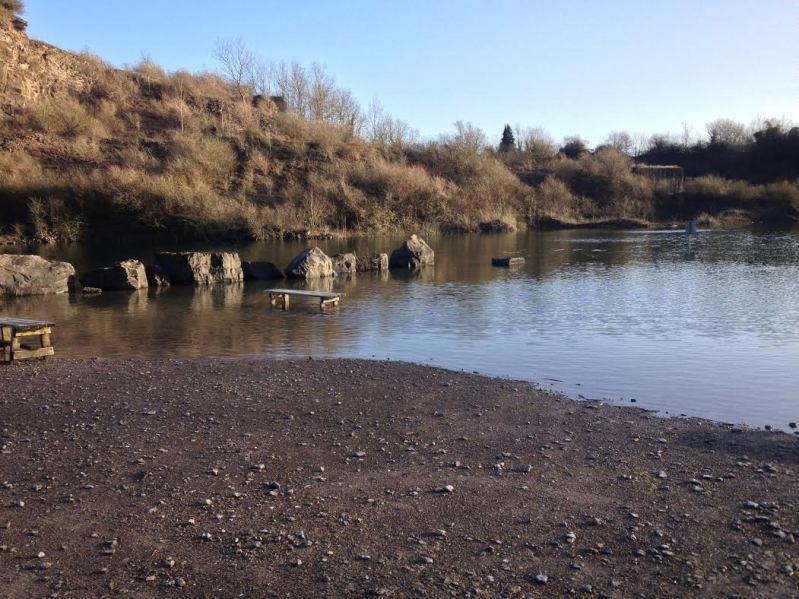 Chris, Tim & myself kitted up for our first dive – I had a new weight harness to try (my weight belt ended round my knees on both dives last time making the waddle out of the water at the end of the dive even more penguin-like than usual!) & Tim had a drysuit he was considering purchasing to try out but decided fairly quickly either it was either too small or Christmas had been too kind to him!

We waded into the shallows & submerged but Chris suffered a very bad migraine due to the coldness of the water & had to signal to surface, which we did as per protocol. Tim, now changed into his trusty drysuit was nominated to continue the dive.

Last time at Cromhall visibility was atrocious (we had to hold hands continuously on both dives!) but this time it was much better & we finned gently out to around 11m & greeted the snails on the top of the shallow shipping container platform & practiced OO2. The swim back to shore was somewhat eventful as I lost buoyancy control & ended pogoing to the surface twice!

Sue & Ian then went in for their dive with Ian looking to catch up on the training he’d had to put on hold last year due to work pressures. We monitored the SMB touring around the surface until they returned & signaled a very enjoyable dive.

Tim offered kit-kats all round before he & I kitted up for an afternoon dive to try to sort that buoyancy. I’m glad to say this dive was much improved & we greeted the shipping container again before embarking on a very gentle ascent from 11m following the submerged road back to shore.

As we emerged the sun was still shining (as it had all day – again a contrast to the rain in November) & we still had the place to ourselves! A leisurely debrief followed before we de-kitted & headed for home!

Cromhall really is a place of contrasts, both November & this dive were enjoyable excursions but the weather & the viz were certainly preferable this time!