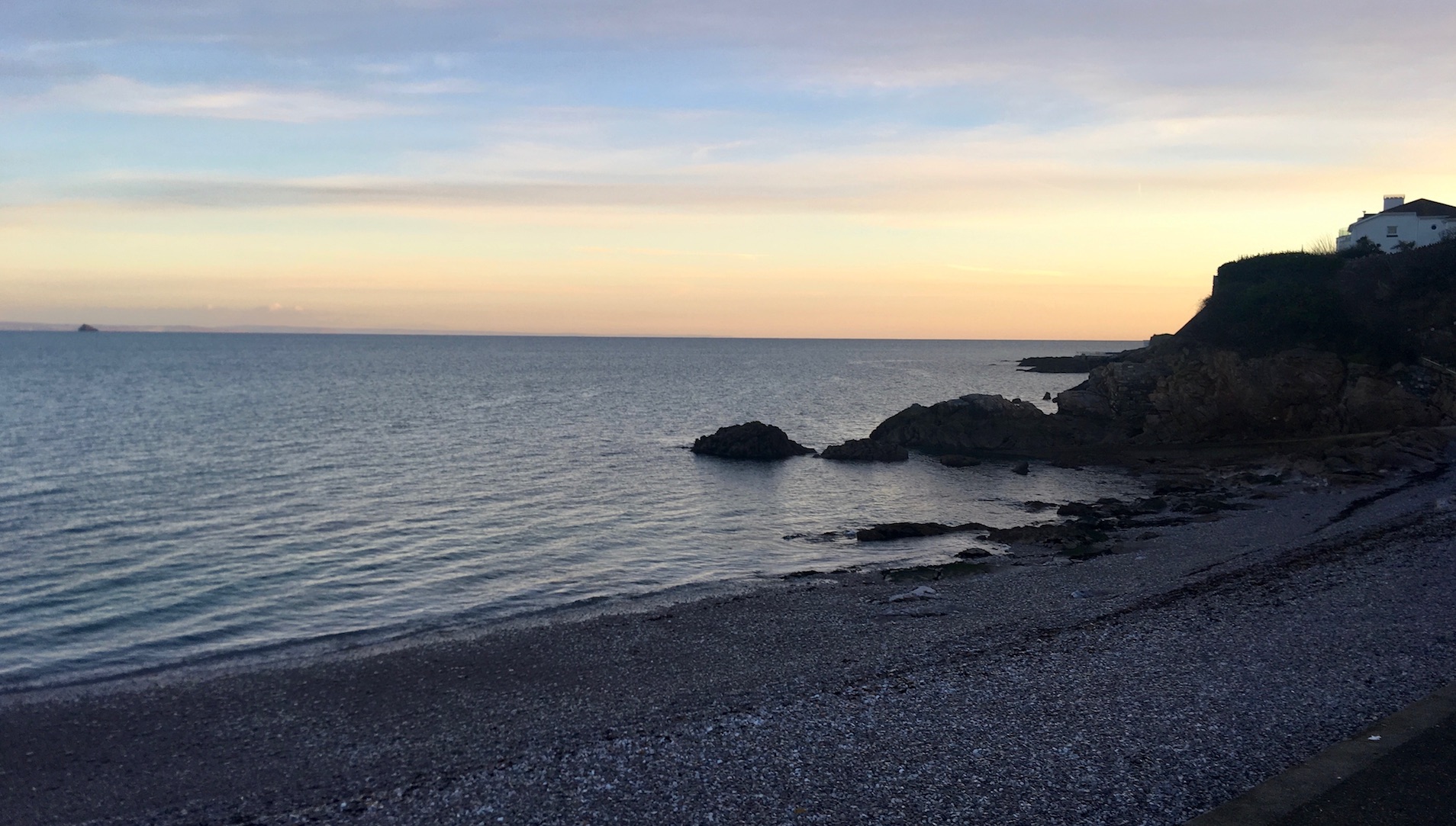 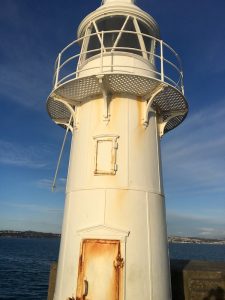 4 degrees, dark (6:30am so perhaps not unexpected!) & with the Boxing Day snow still thick on the ground Tim & I headed south for the last dive of the year – Brixham was calling & today looked to be the best day of the week, sandwiched between 2 days of high winds & showers. Word from Baz (of Brixham Dive Shack) that he’d certainly be going in sealed the plan.
With no significant traffic our arrival at the Breakwater car park was earlier than expected & so when Rob & David arrived we took a wander down the breakwater & were to our surprise accompanied by a group of 3 seals tracking our progress as we approached the lighthouse (pictured right) and then again on our return trip.
Back at the car park we glanced out to sea & there a pod of dolphins headed past the Ore stone – not even wet yet & seals & dolphins already!

Brixham has to be one of the most convenient shore dive sites going with parking right next to the beach so kitting up was straightforward & after a quick visit to the just opened local conveniences (note to self : not open ‘till 10 in winter, along with the cafe) it was time to kick off the diving proper. 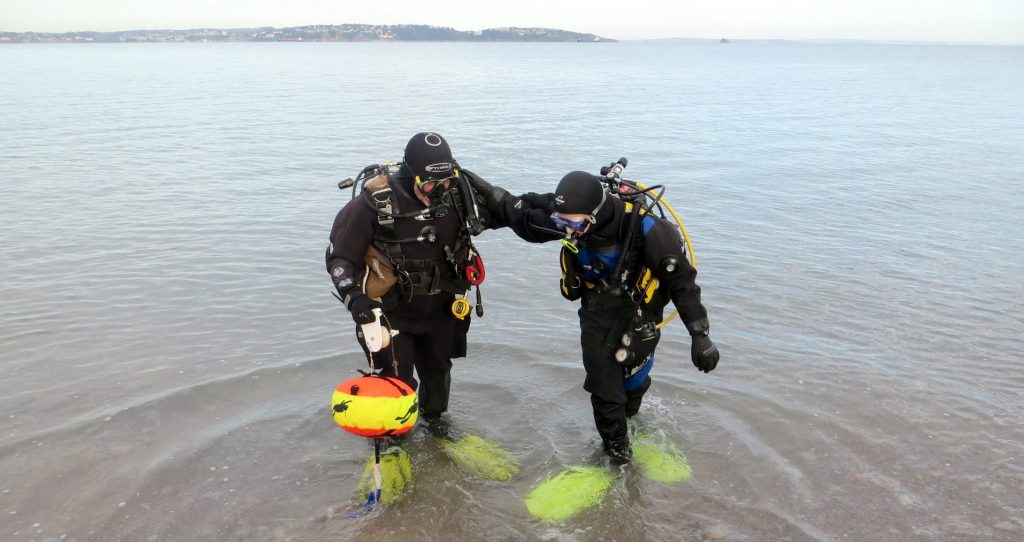 Tim & David were in first for ‘OO3: Ocean Diver – 3rd Open Water Dive’ followed by a pleasurable jaunt around the bay. this was David’s first non-Pond (quarry) dive and likely his longest at 45 minutes, though hardly the deepest with a max of 8.2 metres. Both came back thoroughly pleased with reports of multiple crabs (velvet swimming, edible, spider, spiny spider, hermit), prawns, crayfish and snakelock anemones among others but curiously no fish – still not bad for your first sea dive! 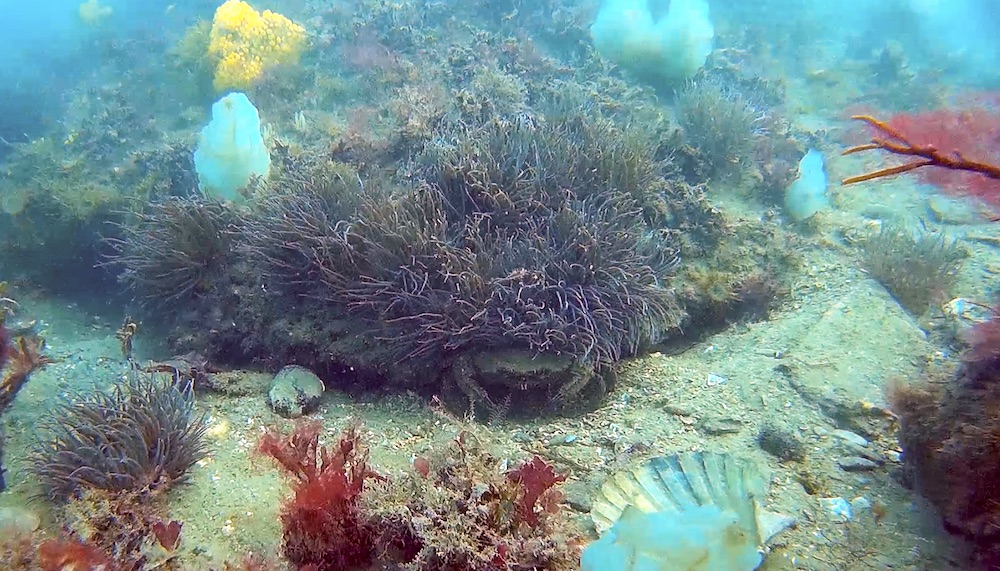 Rob & I helped them out and while Tim & I tucked into our packed lunches Rob set up his calor stove (after checking local regulations – there was no law against it) on the concrete beach separator and proceeded to produce the delightful smell of fried bacon to populate a number of rolls. 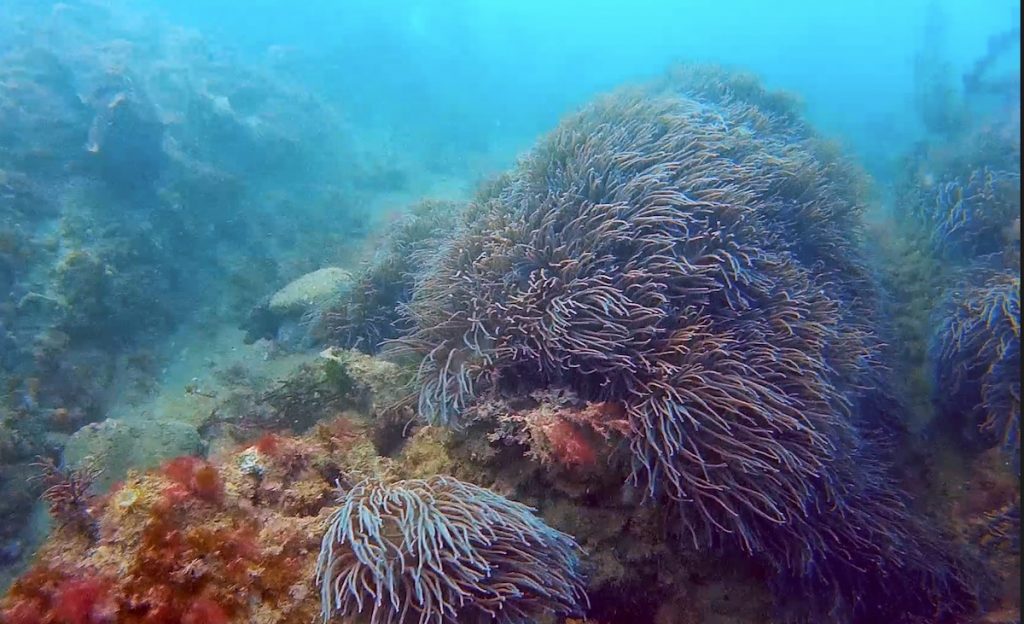 Baz arrived for a pre-dive chat before heading off with a couple of other divers & Rob & I headed in for our turn at the underwater fun. Rob offered to take the blob & the lead in finding critters while I would immortalise them on video. Heading out over the pebbles & shingle the seascape soon turned to sand with dotted stalks of sea grass before we turned west towards the rocks. 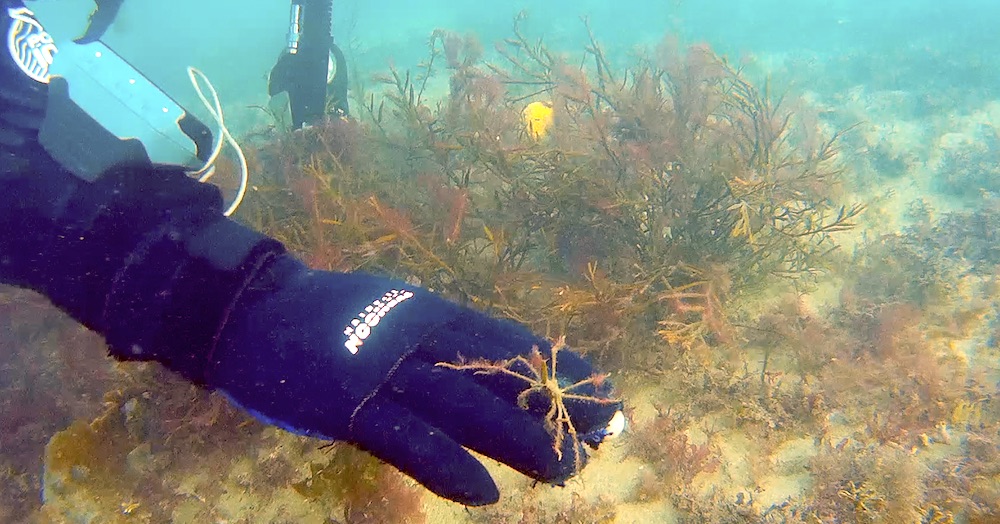 Baby spider-crab – no it hasn’t eaten Robs’ glove, it was like that when he went in!

In a landscape of rocks liberally covered with snakelocks & dahlia anemones our first subject was a large lethargic spider crab which was quickly followed up by edible crabs, baby spider crabs, velvet swimming crabs, prawns and so the list went on – we were really spoilt!. The viz was a very reasonable 3-4 metres & with little swell and a max depth of just under 7 metres we managed 70 minutes of very relaxing exploration. 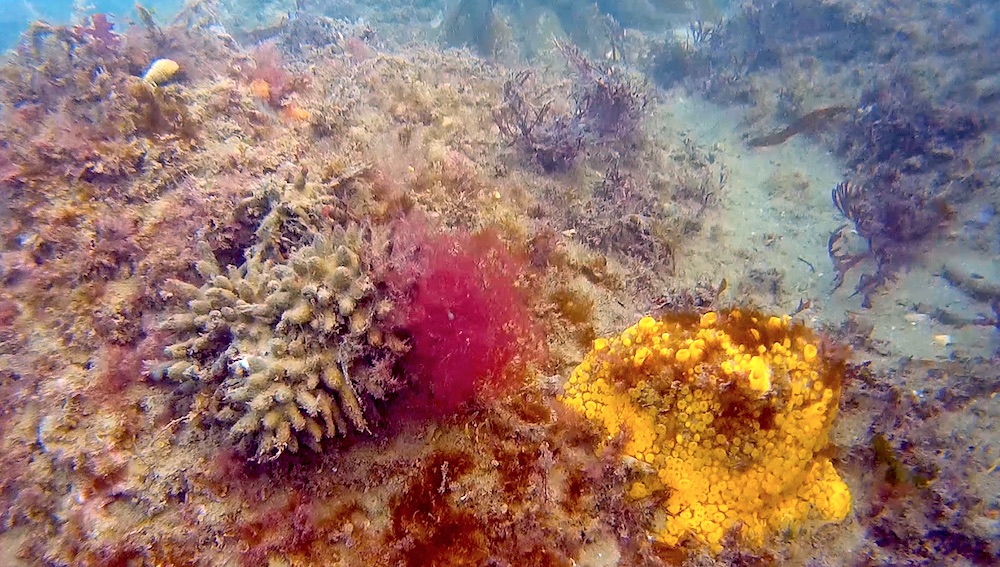 A colourful landscape beneath our waters!

A slight tussle with some fishing line on exit did not dampen my enthusiasm for what was probably my best dive at Brixham and Rob was also similarly effusive indicating it to be as good as he remembered from last being here too many years ago. 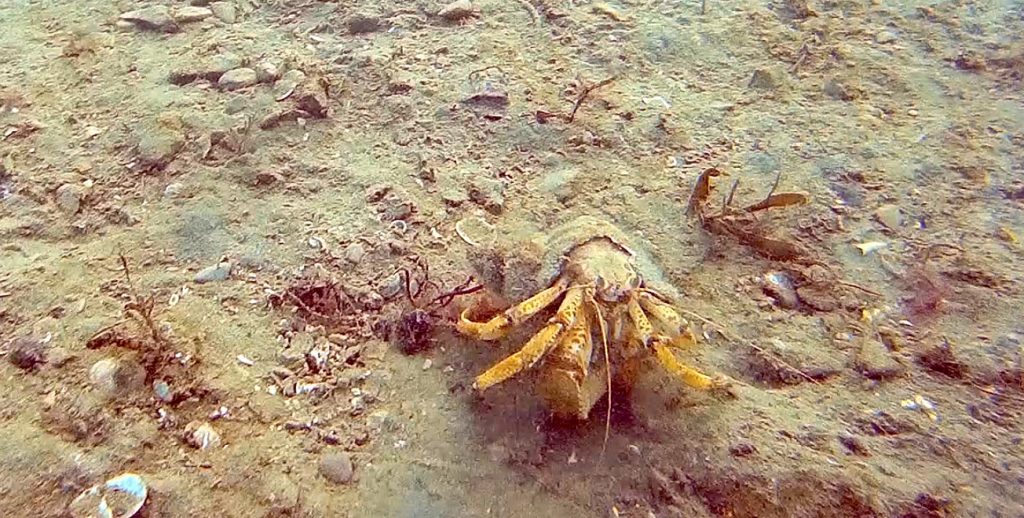 David was enthusiastic for another dip – the diving bug is strong in this one! and Tim of course didn’t need any encouragement and so it wasn’t long before they re-entered the water for their second dive of the day! 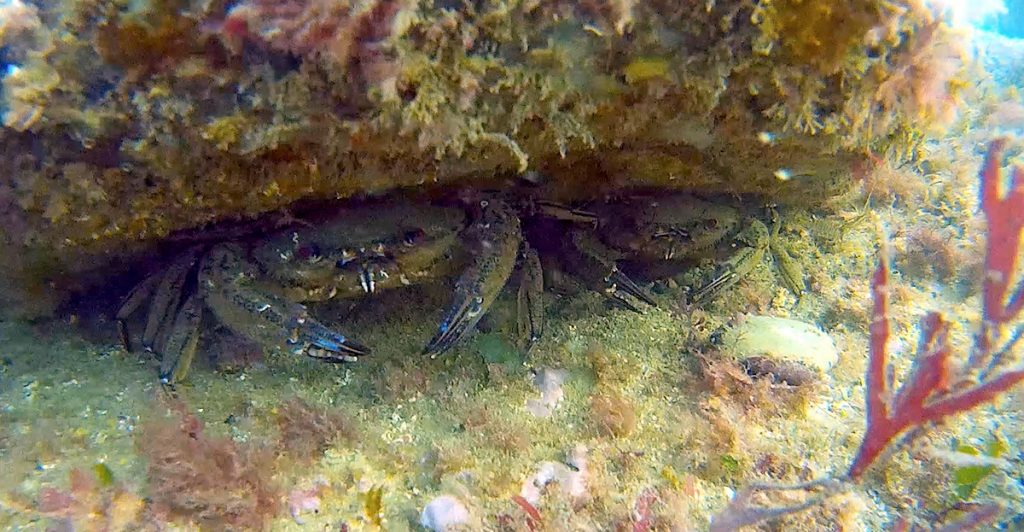 He ain’t heavy, he’s my brother

On their return we were slightly disappointed to find the Breakwater Bistro cafe closed at 4 & therefore our planned cream tea would have to be postponed to another day and so with dusk approaching we headed off to Brixham Dive shack for some air fills so we’d be ready when the notion for another expedition came upon us again. 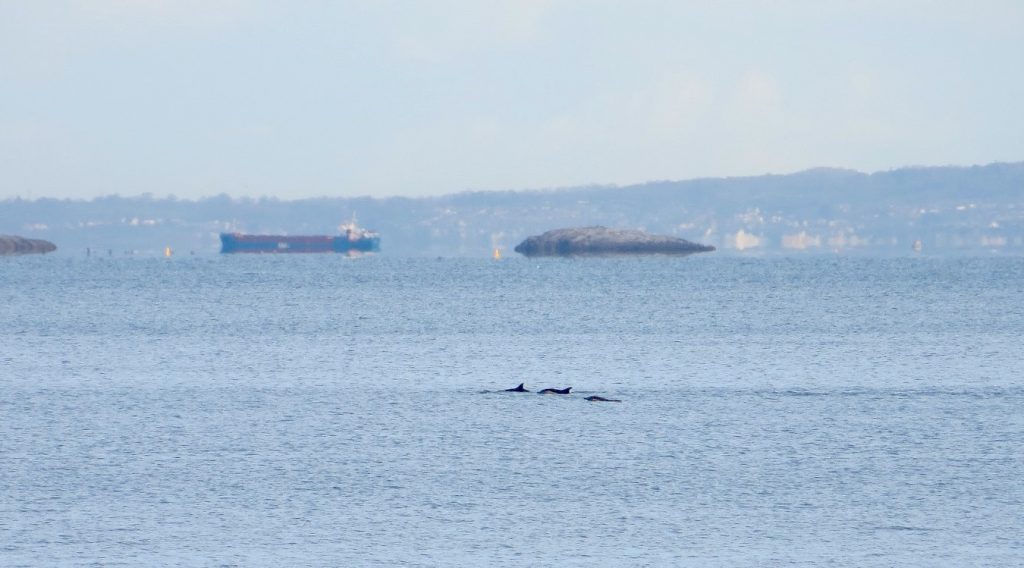 Dolphin pod with the Orestone in the background

The end of a wonderful day