A forecast of a strong southerly meant our plans for a more varied & adventuresome dive trip were somewhat curtailed & dreams of the James Eagan Layne/Scylla, Mewstone or even the Glen Strathallan became the Fort; which isn’t that much of a disappointment as our trip a month or so back proved but this trip was actually to prove adventuresome nevertheless!

Our hardy party (Geoff, Pete, Tim & I) arrived as planned in the top car park in Plymouth & dressing in the increasing breeze we then extracted the boat from the compound, loaded the kit & launched trouble-free. The sun was shining & the temperature, a moderate 14 degrees was ideal considering we were dressed in full rubber bodysuits! 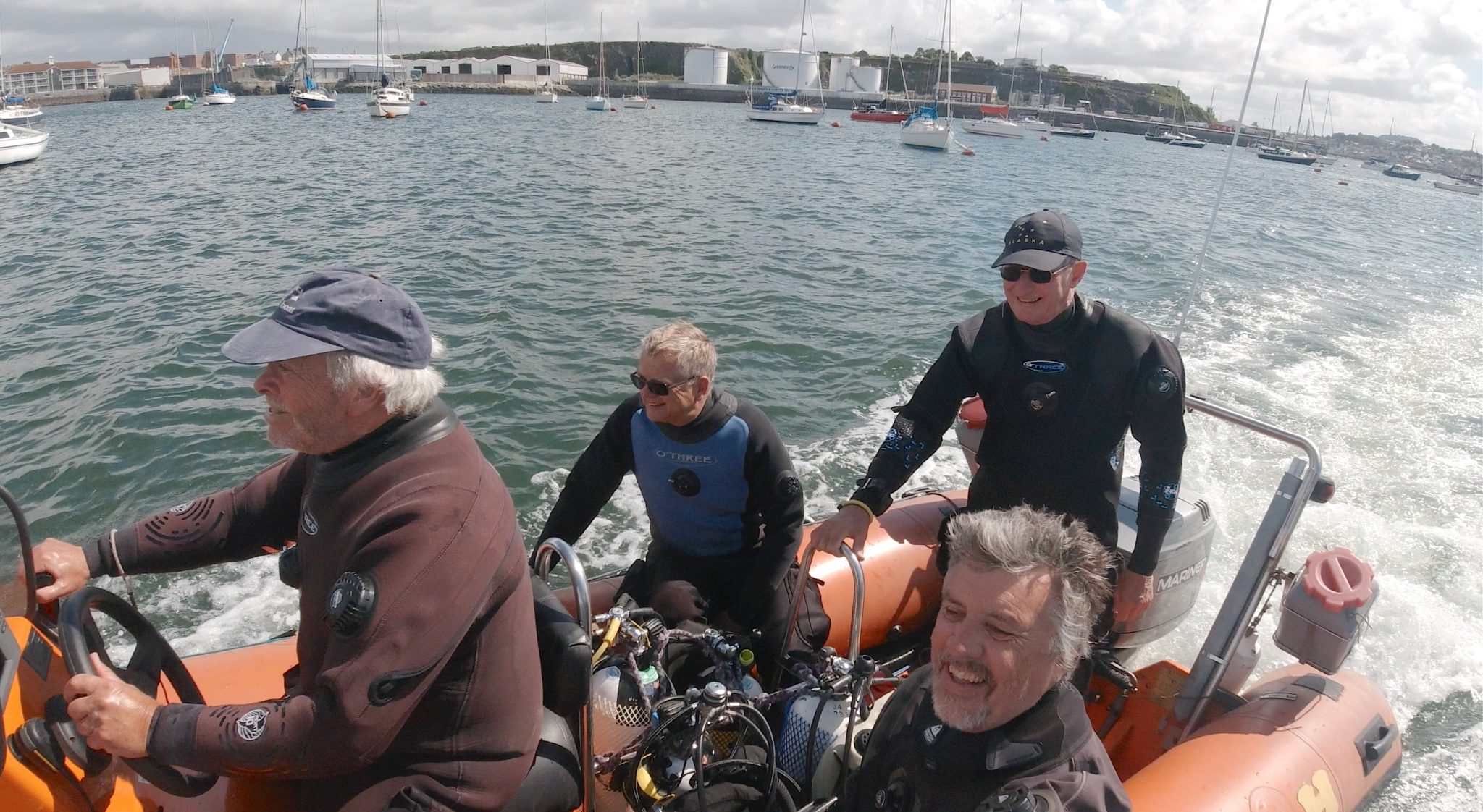 The engine started with a little coaxing & we were off for the rather bouncy (there were whitecaps on the waves inside the Breakwater!) couple of miles out to the fort. On the way we saw InDeep heading out with Seeker, Panther & Size Matters & wondered what sort of trip they’d have outside the Breakwaters’ protection.

So glad I bothered to have that shower this morning!

Pete & Geoff kitted up & Tim manoeuvred the boat wrestling with the wind so they could get in, we then moved off a ways to watch their bubbles & enjoy the sunshine. A large submarine cruised into the Sound (very impressive) & we watched InDeep return for a surface interval a few hundred metres away. 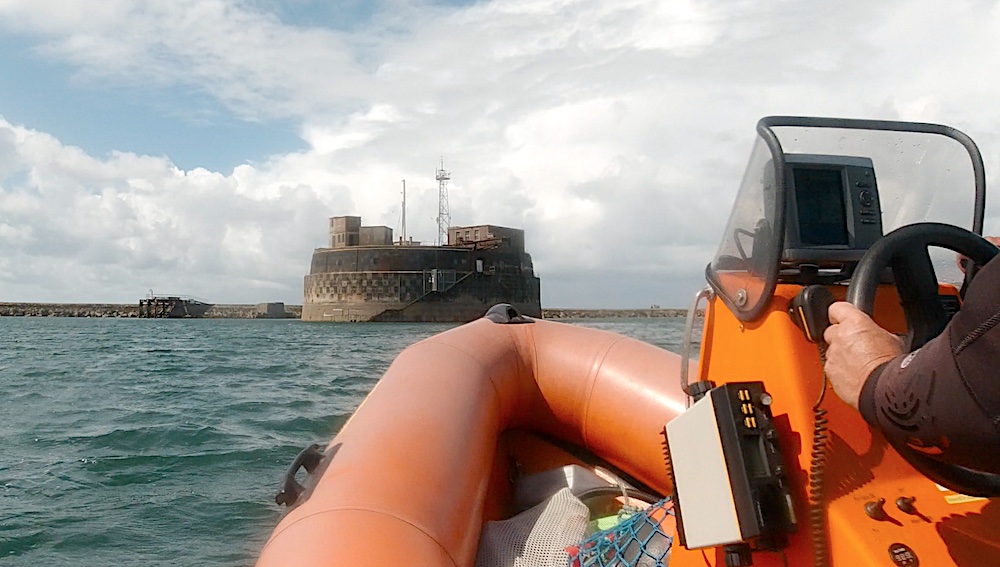 Our target – the Fort!

Our divers had been down 30 minutes when our engine died and then the skies went dark & we were hit with a sudden squall of freezing rain & a blustery wind. Tim tried to get the engine going without luck. Swapping to the spare fuel tank gave a momentary respite but then it was dead again.

A second squall hit us & Tim decided it was time to call in help so that our divers still had cover as the wind would blow us further away. Very quickly we got a response from InDeeps’ Seeker over the radio who indicated they would come to our aid while one of their other boats, Panther would look out for our divers. 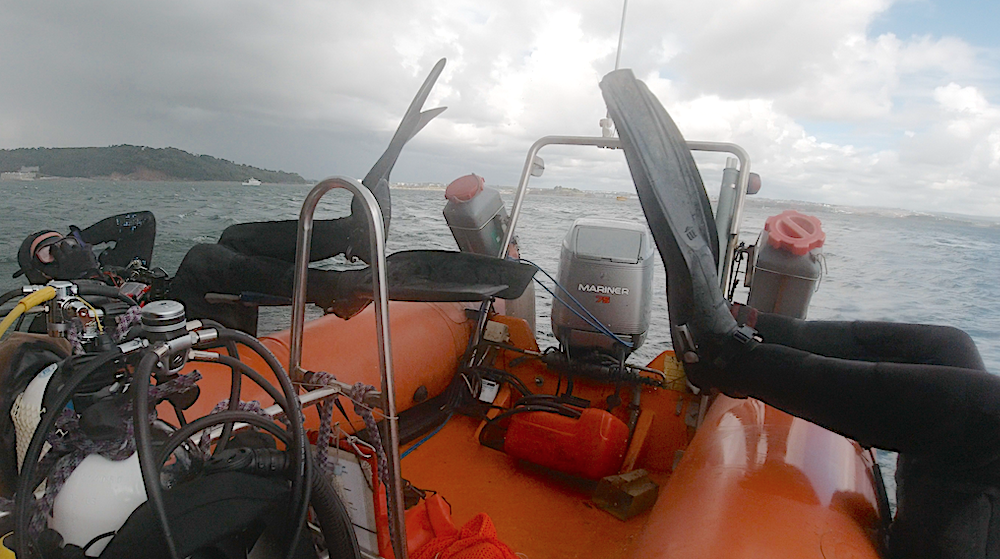 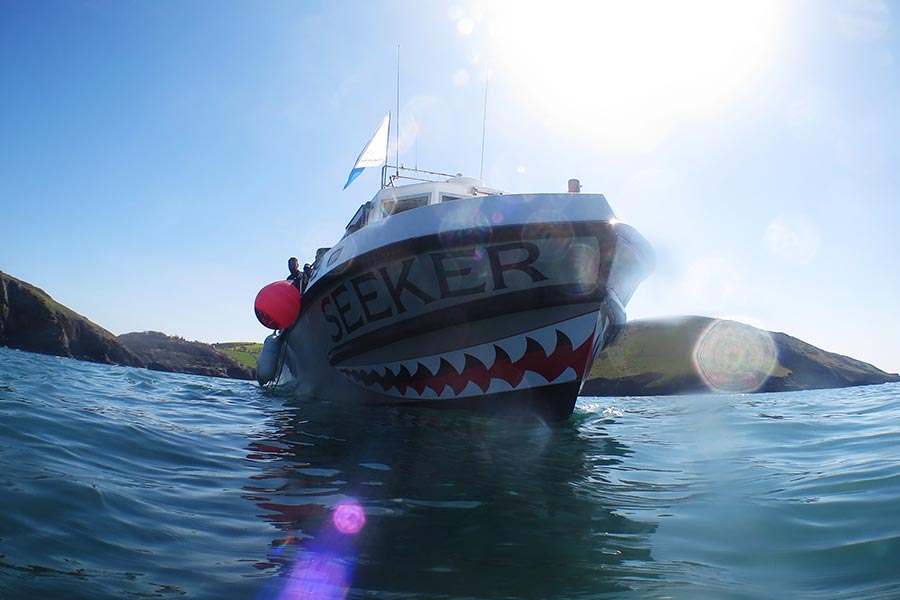 Coming alongside & tying us off Seekers’ skipper inquired after the problem but there was no easy fix so they took us back to the fort to recover our divers who were coming to the end of their agreed hour.

Due to being on the opposite side of Seeker & being unable to see us alongside they were surprised not only not to see the boat they expected but also to be offered the use of a lift to go aboard Seeker!

Geoff accepted this gracefully but Pete headed for our boat until we pointed out it was broken – he then had his first experience of a hard-boat lift (he’s now wondering how we get one fitted to our RHIB!)

Very welcome hot mugs of tea were provided all round while Geoff & Pete indicated the visibility on their dive wasn’t great (1m+) & less life than a month ago. 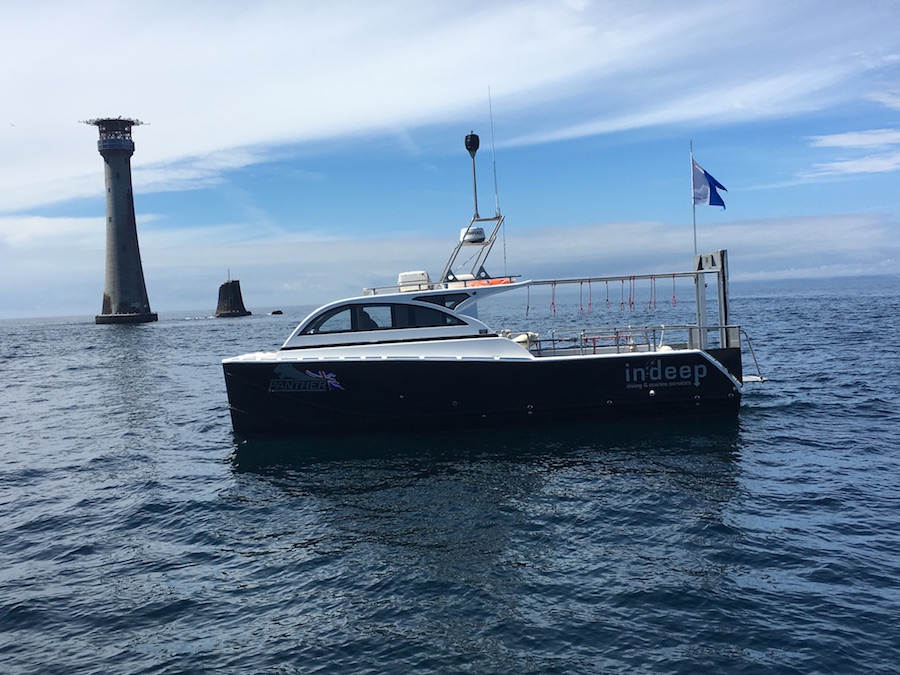 Seeker then towed us back to port before going out with their divers for their second dive.

On the pontoon after some ‘tweaks’ the engine started & thereafter started first time. We decided the mystery needed further investigation but lunch was calling so we headed up to the top car park for a bite to eat watching the Sound & a windsurfer having the time of their lives!

Back to the boat it started & we decided to go for fuel but once again the engine died & we had to resort to oars to get back to the pontoon. Pete found the starter motor had stuck & released it but we determined it was time to take her out for an expert overhaul (Indeep provided a contact)

It was time for a wash (for the boat) & a change (for us) before putting the boat away and a quick debrief before we hit the road.

Our sincerest thanks to InDeeo for their efforts, you saved our bacon guys!  and my thanks to Geoff, Tim & Pete for supporting what turned out to be a very different days’ diving!

Let’s (maybe) not do it again!