6th August: ‘Let’s go hard hat diving’ suggested Stuart Butterfield on a winters evening.  The enthusiastic nods from the membership indicated approval of the idea. So after much searching and some let downs we chanced upon Ben Thomas, owner of Portland Oceaneering based at Castletown, Portland.  This friendly and likeable diver was to prove the key to a brilliant diving experience.  Ben is the proud owner of a collection of Siebe Gorman hard-hat kit.  His knowledge and enthusiasm for the subject, combined with his workshop skills ensured we were in safe hands. 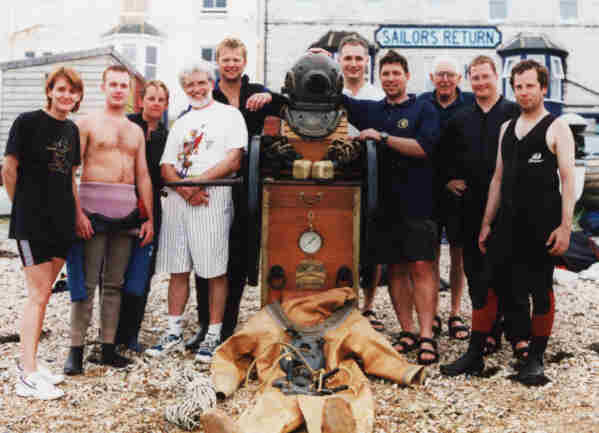 The group was originally ten but Rachael had to pull out at the last moment with a cold.  The nervous look on some divers faces that morning wished they could have joined her.

Our group comprised: two ladies both Carol’s representing the junior female section of the club, Frank Rogers representing the over seventies and the usual assortment of dive club gentlemen (big bellies and all that) with Bob Abbott really looking the part in his Neptune beard.

Ben Thomas gathered us around for a talk and demo.  The huge suit looks like new, the air pump is in pristine condition with brass and woodwork gleaming.  The air hose and helmet look as thought they had seen better days.  All the kit had been neatly assembled on the beach ready for us to use. 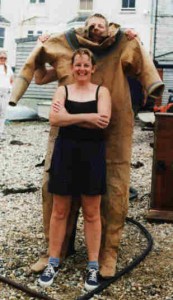 First the suit goes on, one size fits all, the material feels a lot tougher than it looks.  An under-suit is needed for protection not from the cold but abrasion.  You look lost inside it with the crutch around your ankles. From the outside it has more folds than Nora Batty’s stockings.

Now the boots go on, brass toecaps with wooden insoles and half-inch rope for laces, just stuff your feet in and lace them up tight.  Wrist straps are used to take up the slack in the rubber cuff seals, the divers who used to wear this suit must have had wrists like cannons.

On goes the neck collar (this one’s a six bolt helmet) tucked under a rubber lip and bolt flange on the suit – very secure.  Ben uses some tough packing material to act as padding inside the suit this protects our shoulders from the heavy collar (real divers don’t need it).

Stand up and on goes the waste belt with brass knife, your beginning to look the part now.  A rope serves as a crutch strap and attaches to the collar to keep the helmet and suit in position when underwater. 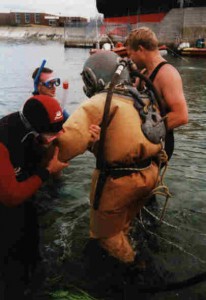 Ready for the helmet, the faceplate is removed as the helmet is carefully lowered over your head – careful no bashed noses thank you.  Then an eighth of a turn secures it and a pin locks it.

The safety line is tied on and the air hose strapped in position.  Now the heavy breast weights go on, these counteract the buoyancy of the suit and helmet, keeping you firmly on the seabed.   ‘Start pumping’, the air from the three-cylinder pump pulses in the back of the helmet.  Finally the faceplate is screwed into position and you’re ready to go in.

Two helpers ‘assist’ you into the water where two standby divers in snorkel kit take over.

It’s a great feeling as the buoyancy takes hold; you peer out through the portholes in the helmet by moving your head around.   You soon realise it’s a miracle how divers ever managed to work in these suits.  The restriction to movement and lack of co-ordination compared with SCUBA gear is unreal.  But a great experience if you’ve never worn one before.

For walking, you need to fall forward and dig your boots in while keeping hold of your lines.  Getting out is the worse part, you feel twice as heavy as when you went in.

It takes about 20 minutes to kit-up, another 10 minutes or so spent in the water (that’s more than enough) and then 15 minutes to de-kit.  A group size of about ten is the right size to provide support for kitting, pumping, standby divers and lifeline attendants etc.

So how did we all fare?

Well I (Chris) grabbed pole position in the queue and that’s enough about me.  But what about the others, well use your imagination and read on:

Next in was ‘Big’ Pete Davies who quickly donned the huge suit, his tall stature looking lost inside it.  Sprinting out of the blocks with the air-hose screaming as it uncoiled he was gone, off chasing dolphins we imagined.  No hesitation here – a ‘first class’ performance.

Carol Berry, first of the female contenders and the clubs only female advanced diver was to prove that stature provides no indication of performance.  With her suit crutch around her ankles and shuffling along like ET’s granny, she disappeared beneath the waves.  Top marks for brut strength and the biggest smile.

Frank ‘Rocket’ Rogers seemed totally familiar with the equipment confirming our belief that he’s got a set hidden in his garage.  At seventy plus years of age, he took off like a rocket – what was he like as a teenager?   We’re sure he almost made it to the Hood before he ran out of air hose.

Carol Sheppard the newly qualified sport diver was trying to look nervous but she couldn’t fake it for long.  Nose clip on and a quick pose for the camera before she slipped beneath the waves.  A sterling performance, top marks for grit and determination.

Steve Poole just can’t see what all the fuss is about as he slaps on the equipment and throws himself in.  We can picture him clambering around inside wrecks and wrestling giant octopus.

Lee Perry decided on a casual approach avoiding any perspiration as he calmly slipped into the water and out of sight.  Top marks for navigation and co-ordination.

Bob ‘Neptune’ Abbot looked the business in his large beard with mermaids either side (the two Carol’s).  Stopping to pose for the camera with the wind in his beard he should have won an Oscar.  Top marks for theatrical ability.

Matthew Bell.  ‘Matt’ is well known for trying anything as long as it’s wet and today was no exception.  Bristling as always with enthusiasm for diving he made it look easy.

And finally Ben Thomas, the true star that gave up most of his day from a busy dive shop to look after us and then donated all the proceeds (£225) to the RNLI.  Thank you.

f you would like to try the ‘Hard Hat Experience’ then please remember that Ben does this voluntarily for RNLI fund raising and also has a busy dive shop to run.  Ben Thomas can be contacted as shown below and the web site (www.portlando.demon.co.uk) is well worth a visit.

Special thanks to Chris Barker both for organizing such a great day out and for writing up such an entertaining report.