With a 9am ropes off it was a very early start from Bristol (for Plymouth) for the 8 hardy souls laughing in the face of the weather gods and trusting their fate in the great sport of UK Diving! 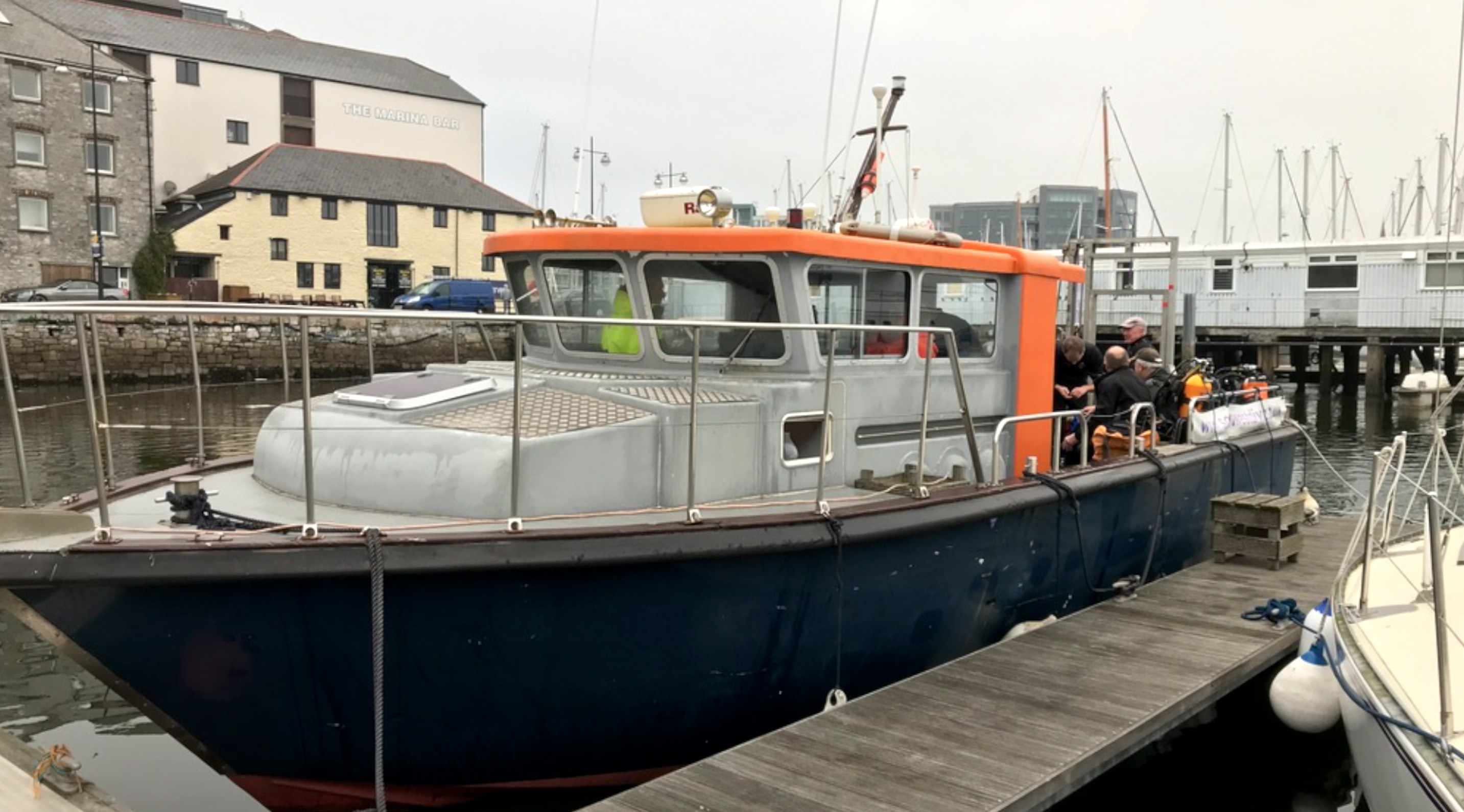 The whole party was at the berth TopGun (our ‘chariot’ for the weekend) occupied outside Aquanauts Dive Shop in Plymouth harbour by 8:20 & after greeting Gary, TopGuns’ very able skipper & Martin, his deck hand we proceeded to load & kit up.
The forecast was Beaufort 5-6 easterlies so we agreed to try for the Mewstone or something in that area before the wind/waves really built and we were forced closer in.

Exiting the harbour we definitely noticed the change in the sea & opted for the Glen Strathallan to see if those famous congers were still in residence.

Chris & Claire, Luke & John, Tim & Colin & Kevin & Chris L duly did the customary giant stride off the back of the boat & headed down the shot. 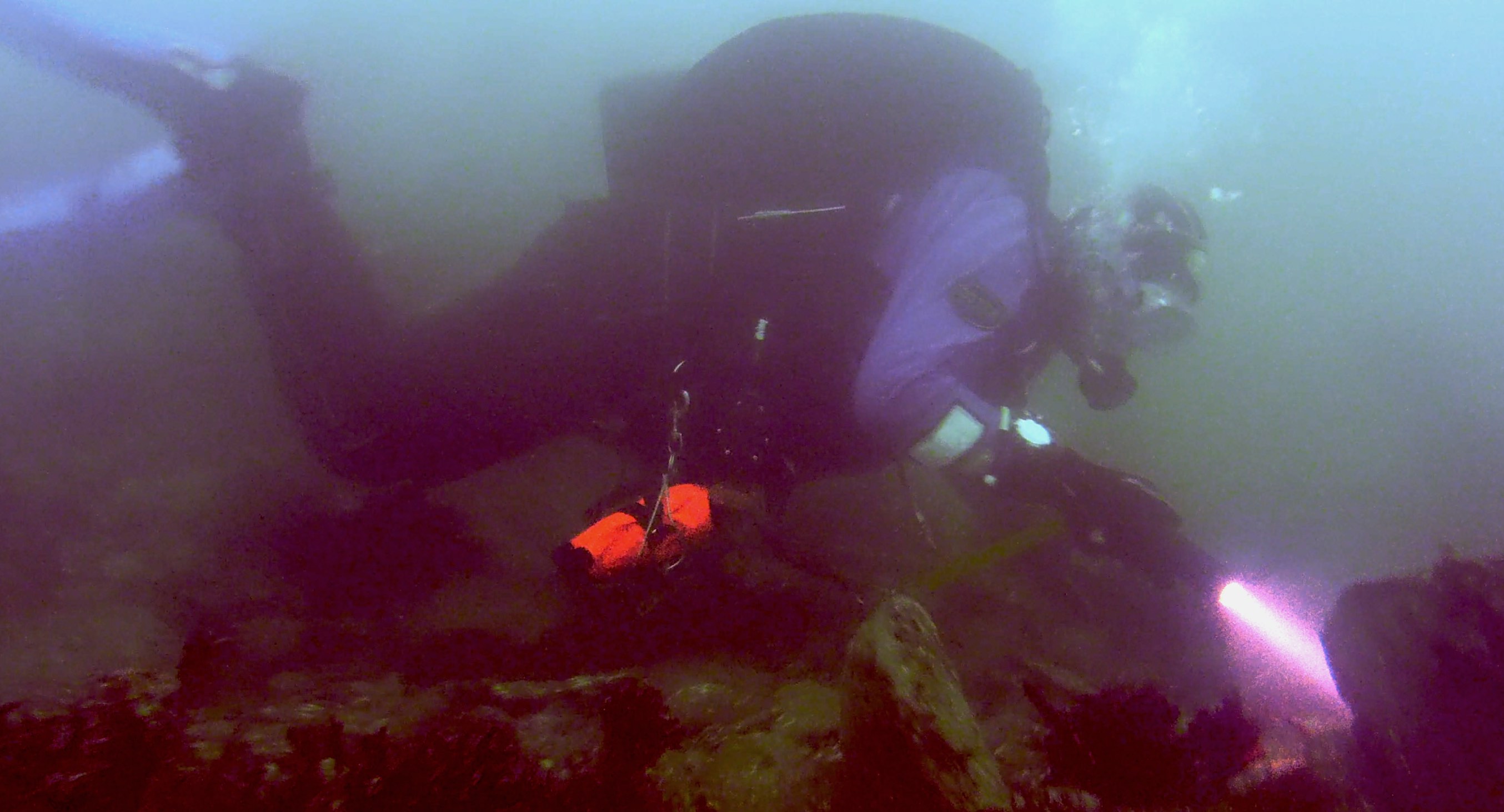 Not so impressive viz

Viz was initially relatively clear but then got milky before settling around 3, occasionally 4 metres at the bottom. Chris & I found the usual ‘porthole’ wreckage & a few other items but then proceeded to get lost in the kelp & milky viz for 15 minutes until I spotted a faint torch. In the hope those divers had better luck we headed that way & soon the majesty of those impressive boilers loomed out of the gloom. Outside there was the odd wrasse but inside mulling around the tubes there was a lot more life. Tim & Colin reported later there were 2 congers still in residence!

Chris found these hiding under the plate

As we explored further afield Chris L spotted a group of fairly large common prawn hiding under the plate; not long after it was time to head up & we could feel the increased swell as we ascended until breaking the surface we realised the weather was definitely on the downturn.

Returning to the boat we agreed it was time to head into port for a little maintenance & the opportunity for the standard pasties, chocolate, fruit & hot drinks to keep us going.

The Fylrix is not a site any of this party had dived before – she was a cargo ship that anchored in Jennycliffe bay after suffering a serious list during a storm back in ’84 and sank overnight, fortunately with no loss of life. Her fixtures & fittings were salvaged & she was used by divers from Plymouth Ocean Projects at Fort Bovisand for underwater explosives training courses so she is relatively widely scattered.

Gary indicated the large green buoy anchored by a stout chain labelled Fylrix (she is actually around 20 metres or so north east of this position) and in we duly tumbled & descended the 10 or so metres to a very silty sea bed broken by the occasional rocky outcrop & kelp growth.

Chris & I were in the half (4/8) of our party that didn’t actually find her & instead duly explored the seabed, rocks & kelp until we decided to call it a day.

The other half of the party had steered a less extreme course & on finding the anchor chain followed it to a reasonably impressive bulk hosting a variety of fish and other life.. 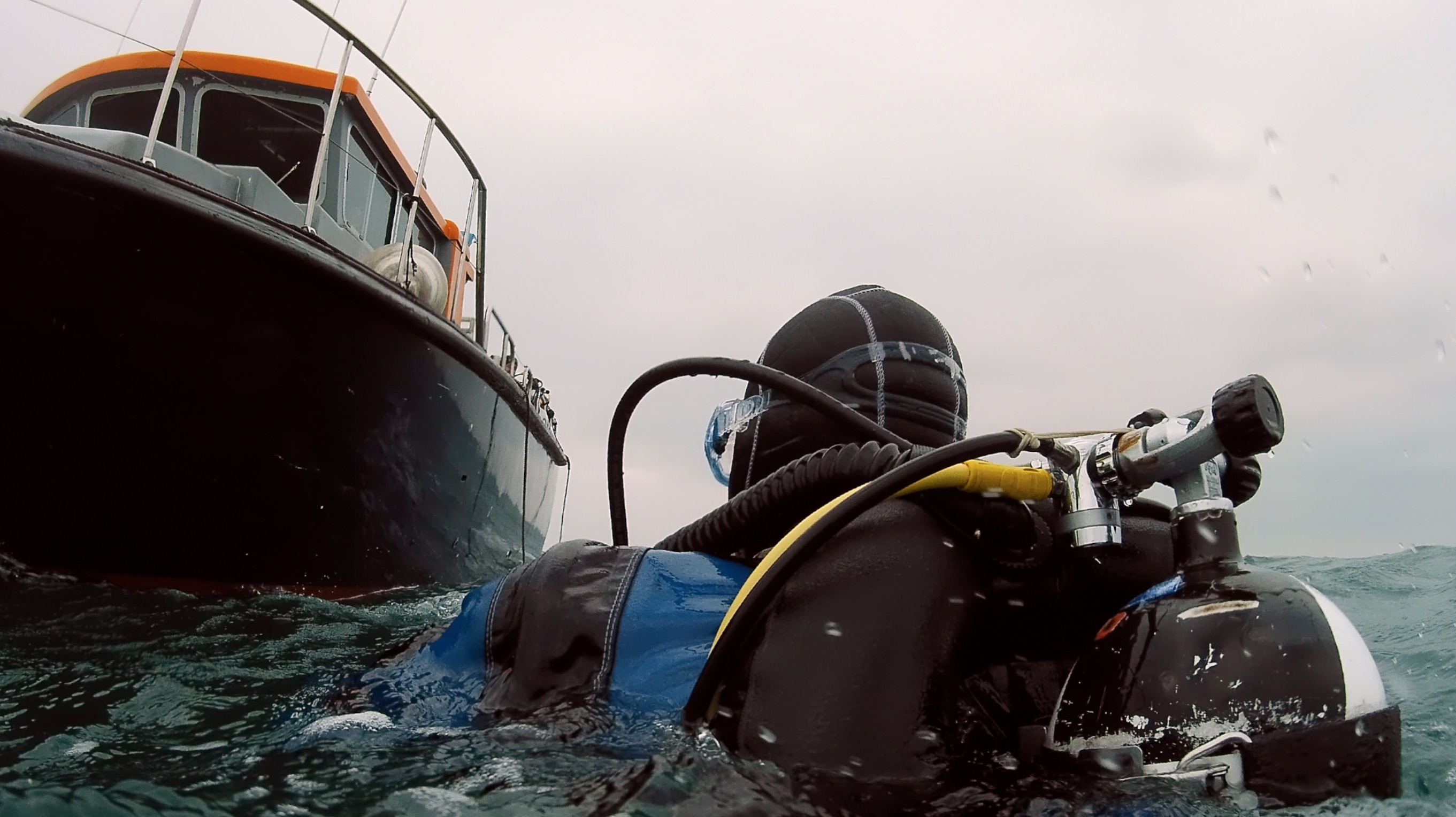 Returning to the boat

Those that had no luck were back on the boat inside 30 minutes while the rest were down another 30. Overall visibility was a little worse than this mornings’ dive in the Glen Strathallan: 2-3 metres

A final hot drink & fudge bar/banana & we headed back to harbour.

John had booked the Fisherman’s Arms for 6:30 so feeling a little more human after a shower we headed out into the bracing wind we’d enjoyed all day!. Gary joined us for the meal which was pretty wonderful, not to mention entertaining as two of our party were roundly defeated by the meat platter, before retiring for the night.

Fylrix (again, or for some the first time!)

Variations on a full English were consumed at breakfast in the b&b: The Retreat, before we departed for our 9am ropes off with Gary & Martin cheerily greeting us as we loaded ourselves up & to a lovely golden glow of sunshine (today’s weather already started out better than yesterday) we headed out.

It was a chance for some compass navigation schooling so we’d find the Flyrix this time but instead Gary simply dropped us on top of it to take no chances! 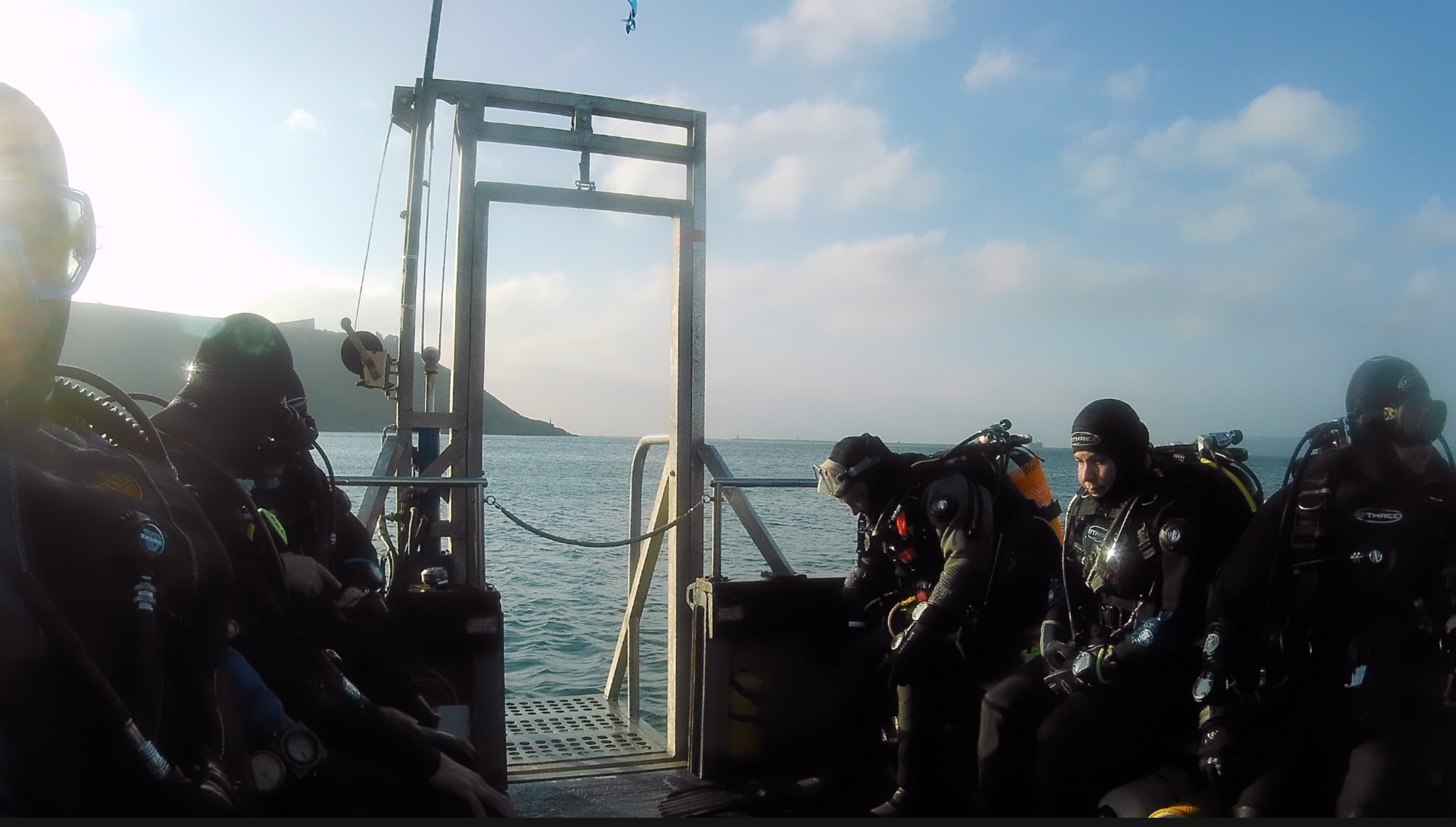 There were certainly plenty of pieces of metal, some quite large but generally unrecognisable in the 1 metre viz: everything was very cloudy. After exploring for 15 minutes & with little sign of life or anything else to detain us Chris & I called it. Others in the party lasted significantly shorter (through no fault of their own) while some: Tim & Colin went for the full hour with a full report of each part of the wreck they had identified 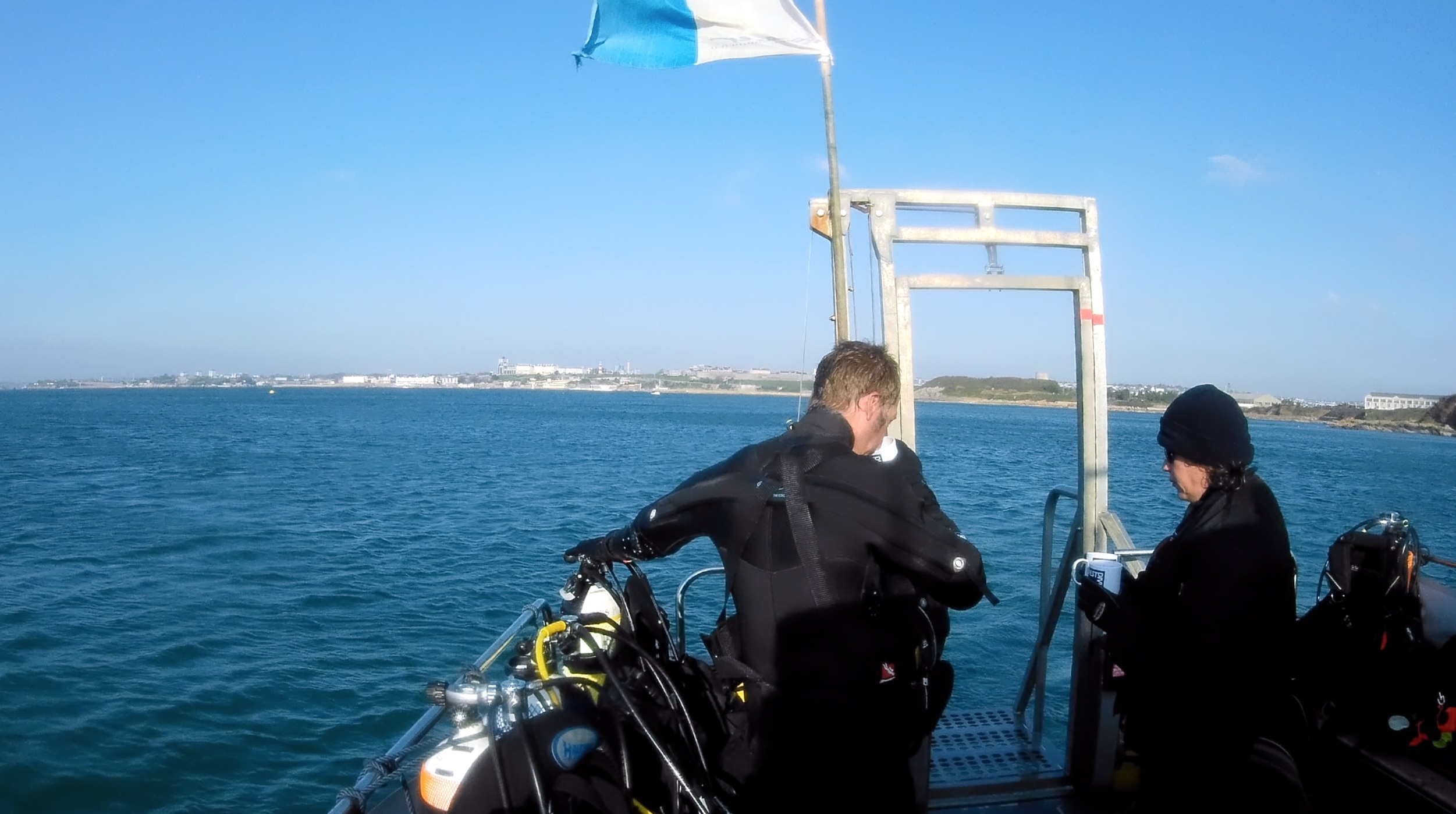 Time for a warming brew!

With Claire having a spot of bother with her kit & John, Chris L & Luke choosing not to dive it was Tim & Colin plus Chris H & myself to finish the diving off

Gary took us to the edge of Jennycliffe bay for a root around on the bottom (knowing the viz would likely be no better than the last dive – at best it was 1.5 metres so not far wrong) 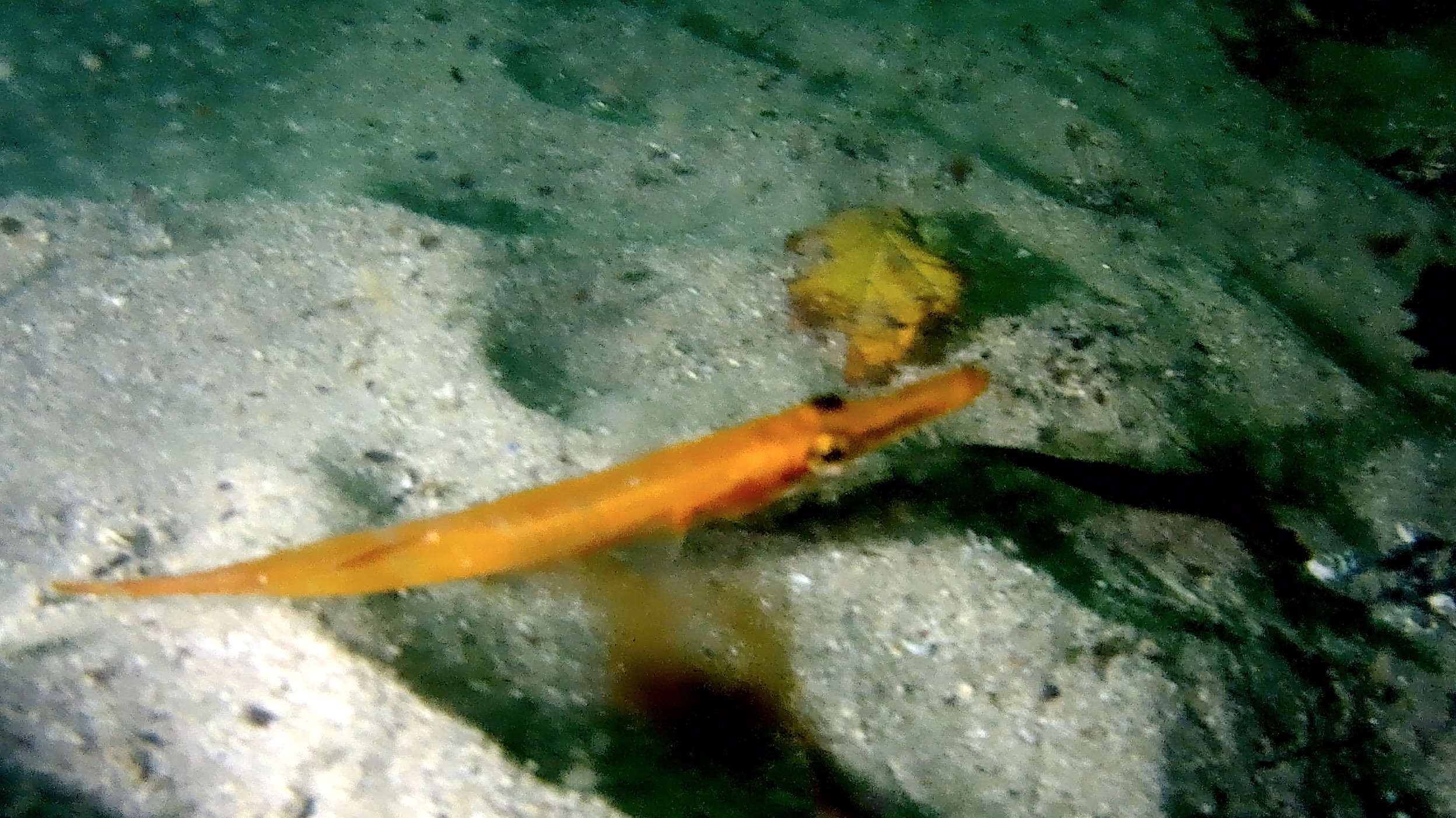 Essentially our plan was to get close to the bottom & just drift with the swell which worked really well. Within the first few minutes I saw a pipe fish, then a couple of gobies & then later there were tiny hermit crabs & sea stars to be found amongst the silty bottom broken with occasional rocks & kelp. 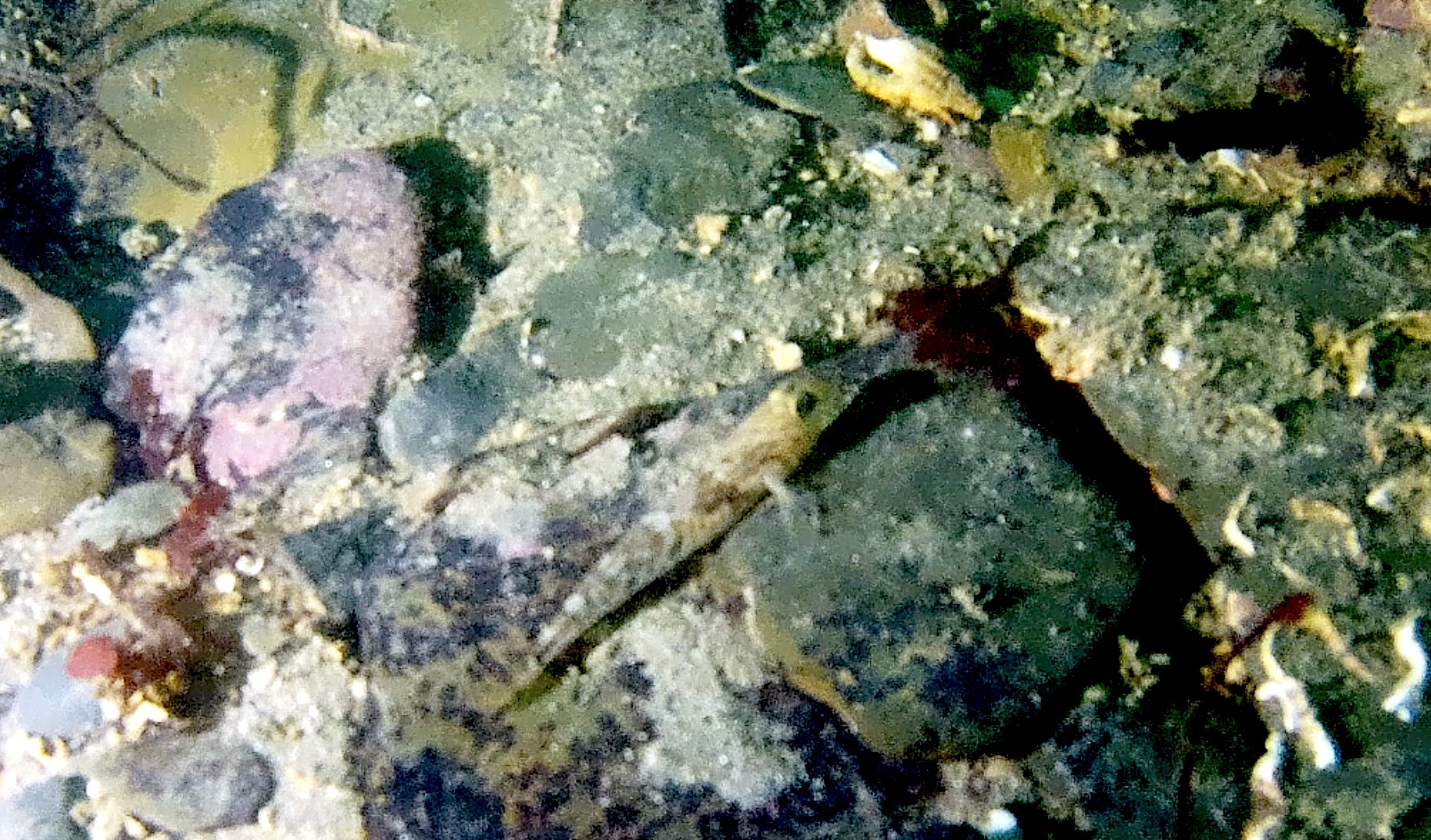 Amongst the rocks there was also to be found (in certainly improved viz from the Fylrix), a lobster pot and then a fishing rod & reel!

And that was it!

We heartily thanked Gary & Martin for their efforts & made our farewells before half of the party headed back to the compound to sort out our RHIB so Chris H could tow it back to the boat shed.

All in all not the best WW weather-wise, a pity as we had a number of first timers but this is UK diving & sometimes you just have to roll with it. My thanks to everyone for coming along & hopefully we’ll get a better break next year!