Spring Bank Holiday Weekend: My plan was to have a half day, get my bottles from the dive shop and head for Plymouth by 1.30pm. I left home at about 3.00pm and you guessed it, got caught in the traffic on the M5. It was tailed back from the Avonmouth Bridge to Aztec West.

What a good start to the weekend. Then the rain came. As I was driving I thought the weather couldn’t get any worse – how wrong I was!

Got to the camp site about 6pm, unloaded the tent from the car and ? Yes the heavens opened. Joe and I put the tent up in the pouring rain. I thought to myself, why? All in the name of diving. Two years ago before I started diving I wouldn’t even have contemplated going camping in the rain, but now, if it means a dive then of course.

The others arrived one by one. We all piled into J&H’s caravan for a warming and the customary several beers. There were about 12 of us in there and the drink flowed as quickly as usual. For some reason, the men were at one end and the women at the other. Was it because of the jokes? When I got into my tent all I could hear was Harry putting out the empty bottles.

Saturday we made an early start and drove to Fort Bovisand. I’ve never been there before, good thing was didn’t have to pay slip fees or for parking – still prefer Queen Anne’s Battery though. There were six divers in the first boat. Mary and I, Bob and Tony, Shelia and Tim. Tim was acting the novice for Shelia’s dive leader assessment. We stayed within Plymouth Sound as the water outside the breakwater was bit too rough. With Mike as coxswain we were soon on our way to the fort on the breakwater. Mary and I were first in. I had the SMB and Mary navigated. This was a superb dive. I took my torch and was able to see all the colours of the fish. It really was good. There was so much to see. Both Mary and I were forever nudging each other to look at something of interest.

In the afternoon, I dived with Tony. We again went to the fort, however, this time the vis was awful. After 15 minutes Tony and I both decided to call it a day. We could hardly see each other. 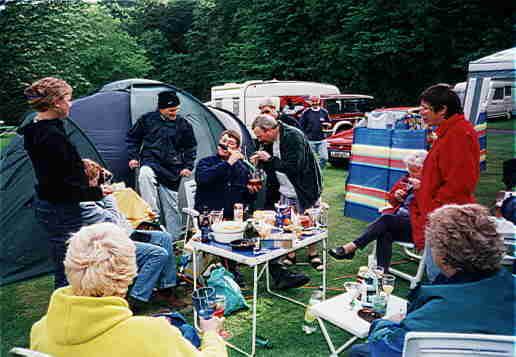 The evening was spent around the bbq. Joe, Tahnee and I had fish and chips as it was too late to go shopping. (Truth was, I couldn’t be bothered either). Did it rain? Luckily Cyril and Brian had already put up the gazebo’s, so we stayed dry. Most of us had a reasonably early night compared to normal.

We had to make an early start to be at Queen Anne’s before they closed the roads for the Plymouth marathon. As we were there early, several of us just had to have the greasy spoon breakfast, to start the day.

The diving today was also limited to inside the breakwater due to the weather. I was diving with Tim, Cyril was with Joe. We went over the Cawsands for a drift dive. I was looking forward to this as I have not done one before. Tim and I went in. The kelp was so high. We got below it. I felt it pull everything, my DV, my mask, fins etc. I felt a little uneasy to start with as I had to constantly pull the kelp away from my mask. It was what I would imagine a jungle to be like. We found a steel cable to pull along and follow. After half an hour, both Tim and I decided we had had enough. Cyril and Joe went in a different direction and missed the kelp, lucky them!. 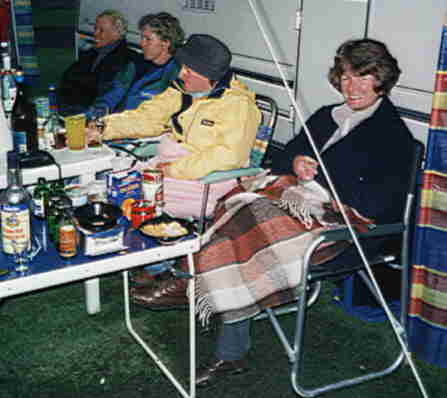 We all got back to the camp site at about 5pm. The sun was shining!. We all made the most of this to dry out kit etc. It looked like a car boot sale!. The dips and beers came out. Then the cocktails. Boy were they nice. Just so that Tim and Harry didn’t feel left out, Cyril bought them a jug with two very long straws. However, the straw was too thin for H as it restricted the amount of fluid he could drink, so Joe decided to get the snorkel out. Yep Harry was drinking his cocktail using a snorkel. Just hope the photos come out!

Then the rain came – again. We all dashed under the gazebos to carry on the party. Another enjoyable evening.

Monday was the day for several of us to make the journey back home. A few of us left early to avoid the traffic on M5. This was a good decision as the journey home was no trouble at all. There was diving on the Monday also, but I’ll have to let someone else tell you about that.

Anyway, yet another good weekend with good company. Thanks to everyone and especially to Bob for towing the boat