“It was a bright and early start (well, early anyway) as Chris, Tim and Colin arrived at the boat shed at 6.30am. Thankfully they didn’t need the extra sets of hands and so Kevin, Luke and I arranged to meet them down at Mount Batten.

We all made it down without incident and at 9.30 were gathered in the car park for the briefing. The weather outside the harbour did not look all that promising but we wanted to give the boat a good run for its’ first outing of the season and so Chris suggested we try for the Glen Strathallan but could end up back inside the breakwater if it turned out to be too rough. So we kitted up and off we went.

We got the Assault in the water with no trouble at all. However, unlike the rest of us it decided it was too early to wake up and took a little persuading to get the engine running. After quite a few attempts it begrudgingly fired up and we cruised around to the jetty to pick Chris up. Once we were all comfortably on board we headed out. The swell beyond the breakwater was a bit much to comfortably dive the Glen Strathallan, especially for Luke’s first boat dive and so we headed back in to the Fort. Kevin described some of the things we might find on the seabed, discarded deliberately for diver training, including Project Glaucus (link) – an undersea habitat experiment from 1965. It was down there somewhere but he hadn’t found it yet. 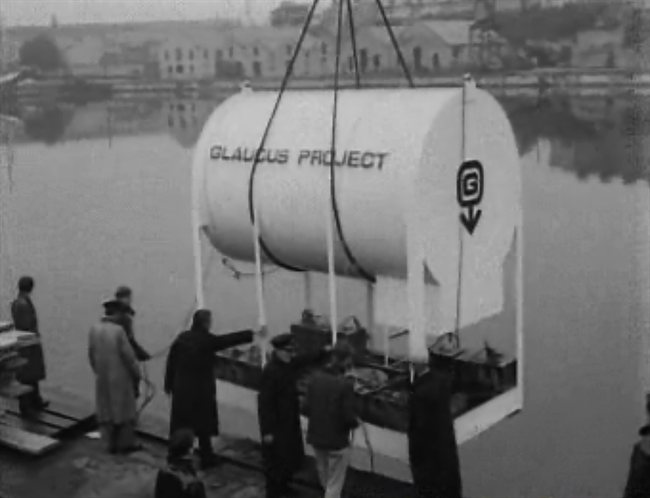 Kevin and I were first in the water. After a few attempts at sinking and with a few extra weights added to my BC we finally submerged and headed to the bottom. After just a metre or two almost all of the meagre light disappeared and we were left slightly disoriented with visibility of around 1-2m. Perfect conditions for my first UK open water boat dive in over 10 years! It was nice to be reminded why I took up this sport. We headed anticlockwise around the Fort, trying to keep the wall in sight to keep our bearings but not always having much success in the poor conditions. If we were struggling to find the fort we didn’t hold out much hope of spotting anything else! 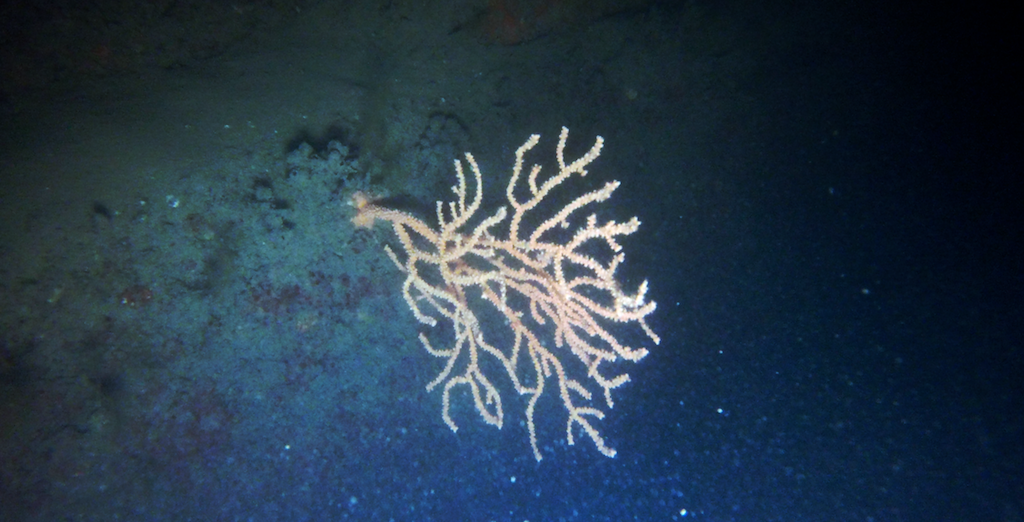 One of many Pink Sea Fans

There were plenty of pink sea fans, my dismal torch managed to pick out an edible crab, and Kevin spotted a hermit crab making his way along the bottom. A wrasse swam away from us into the gloom and then we stumbled upon a mass of metalwork, a few metres high but impossible to get a real sense of scale in the poor light. Had we just ‘rediscovered’ Project Glaucus? 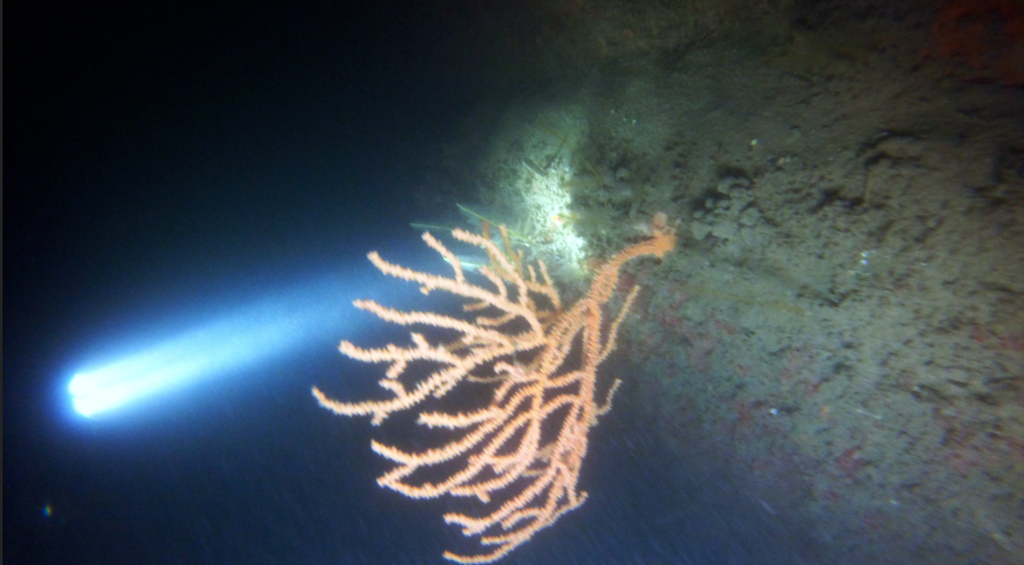 A few meters on the current became too strong and so we turned back on ourselves. Unfortunately, this just headed us back into the silt we’d previously kicked up so with no sense of where we were we abandoned the dive and headed back to the boat. Luke and Tim came up a little while later, also having lost the fort but finding treasure: Tim is now the proud owner of a brass coat hook and Luke has his very own corroded spoon!

After our tales of poor light and visibility, Chris and Colin didn’t look that keen to go in, but they had made it this far so they decided to give it a go anyway. The fact that both of them had obscenely bright lights was definitely going to help! They made their way round the fort, successfully keeping in sight of it the entire time. I don’t think they had much more success in finding any life down there although Colin spend some time trying to take a picture of a rather shy blenny. 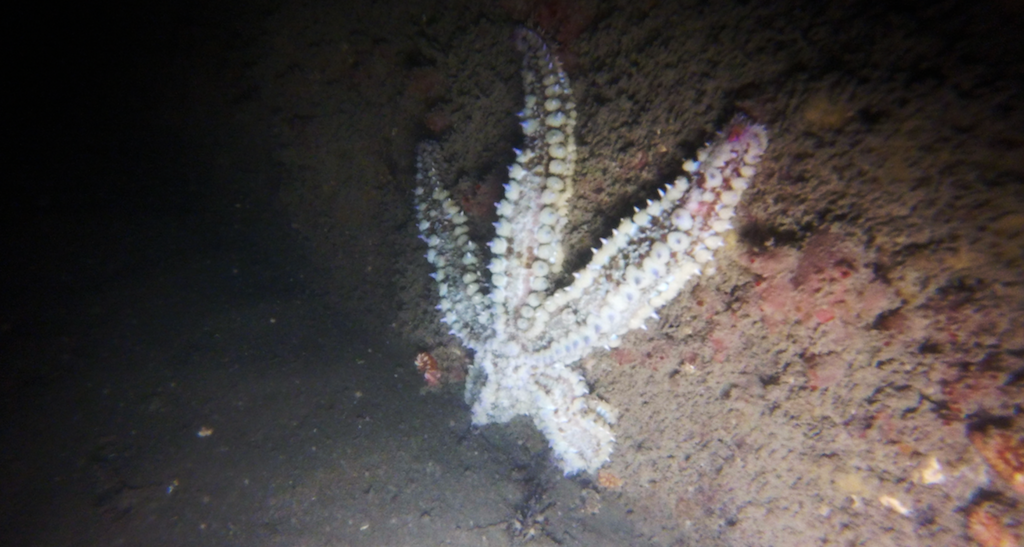 With the conditions what they were, we all agreed that enough was enough and headed for home. A perfect day’s diving it was not but for me it was nice just to get back in the water after so long and Luke thoroughly enjoyed his first boat dive. Our thanks go to Chris for arranging the day, and to Tim and Colin for getting up so early to get the boat ready in the first place. Kevin finally got to ‘see’ Project Glaucus, but whether he’ll ever find it again in better conditions remains to be seen! “

Colin, for whom this dive was his first UK Ocean dive in far too many years!

“Saturday was like travelling back in time for me, as I’ve said before, it feels just the same…but different.

Travelling out on the RHIB took me back to travelling out on the old Avon, the RHIB being far more comfortable!  Gearing up, dropping over the side, meeting at the front then descending through the murky gloom to the bottom – I could have been 22 again 🙂  Thankfully torches are a whole lot better now.

An interesting potter around and a good reacquaintance to that kind of good british diving experience!… many thanks again to Sue and Tim for their efforts in getting this old boy back up to speed and to Chris for arranging the day, I’m looking forward to the next dive 🙂 “

I’ll echo those thanks once again, to Chris for his very professional organisation & briefings and to all those who made the effort to kick off the diving season!