9th – 23rd March, 2014 :We don’t expect to make this trip more than once so it merits reasonable coverage on the website. 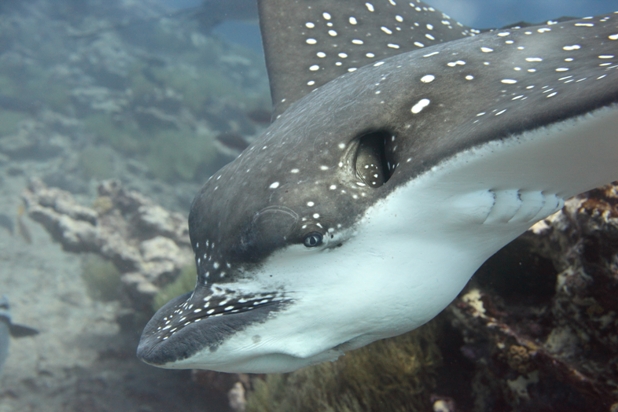 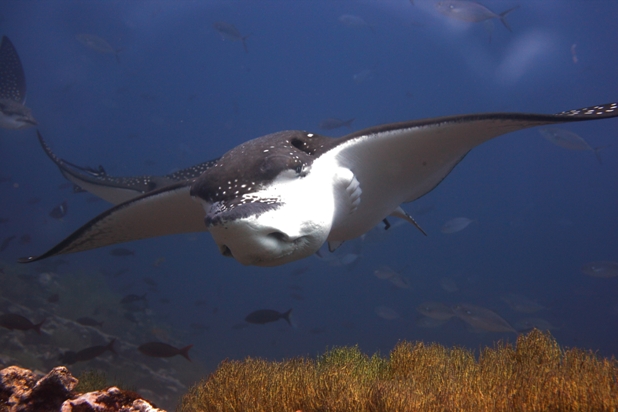 Tourism on the Galapagos Islands is very tightly controlled in order to prevent damage to their fragile ecosystems.

The diving is all geared towards the “big stuff”, pelagics. The boat was only allowed to do specific dives on specific days and as far as I could see, had no options to change this. 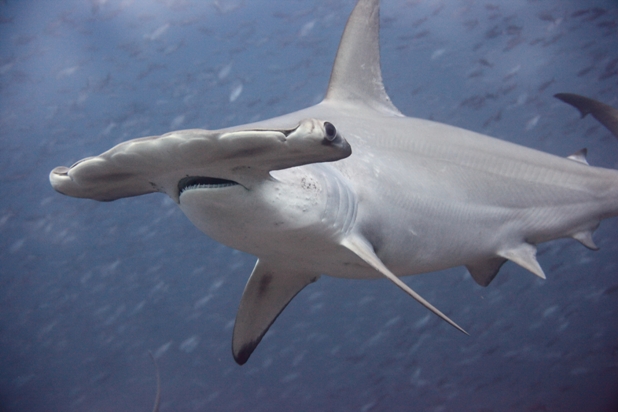 Scalloped hammerhead shark Sphyrna lewini. They don’t like divers bubbles apparently, suits me when he was only about two metres away.

All dives were from the RIBs, the main boat was not allowed to go near enough to any land to let divers jump off. And all dives were guided.

Most of the dives consisted of sinking to where we could hang on to the rocks, and staying put until the sharks and rays swam past. Most dives were at cleaning stations where the pelagics go regularly. 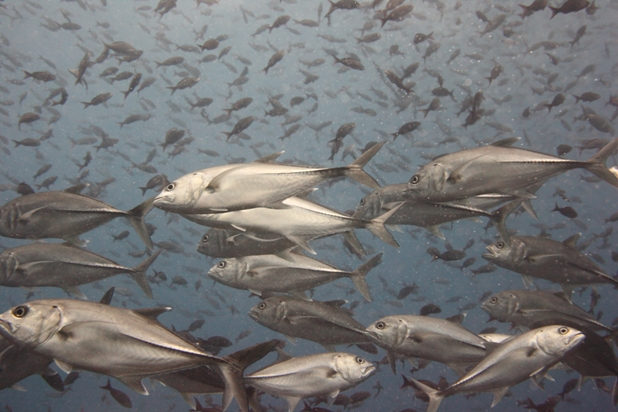 Big Eye Jacks Caranx sexfasciatus with conspicuous white tipped dorsal fins and dark spot at base of pectoral. About a metre long, and lots more in the background. 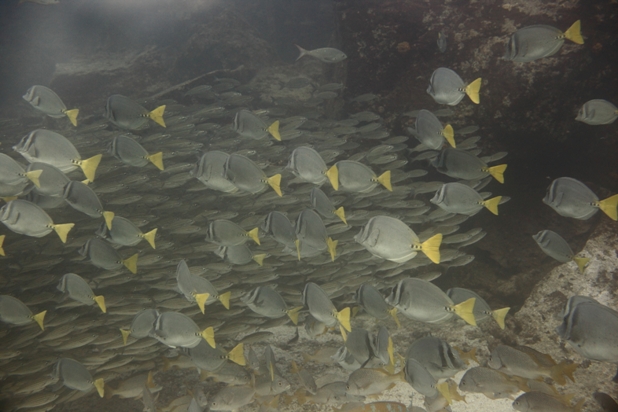 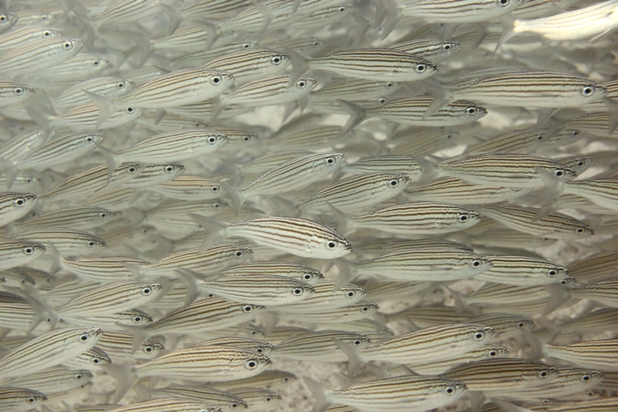 Many of the dives were in fairly currenty or swelly conditions, so although I took my camera on most, taking the strobes also would have made for extra difficulty and a good chance of getting equipment damaged.

And although the Galapagos Sky website clearly shows pictures that have been taken using strobes, the use of strobes wasn’t exactly encouraged. So I was confined to doing scenic shots only; a good job I use a macro lens which does fine for both far and near. 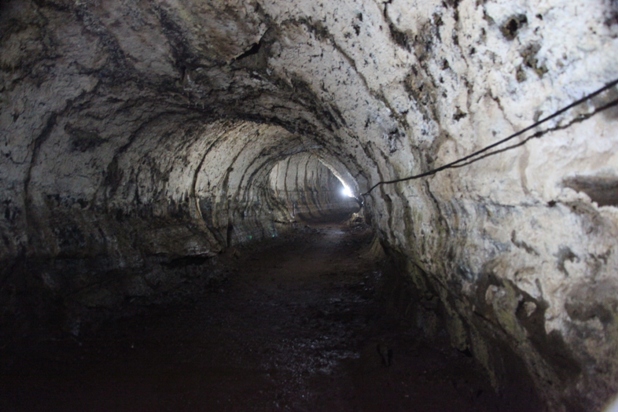 Pathway along a lava tube forming an underground tunnel, with lights. This went for about a kilometre, after this the path was not so clear but the lights continued. So we scrambled over the rocks to find the tunnel open out to a cavern which must have been 20 metres high. At the end it became lower and muddy so we aborted.

However annoying since I paid £150 extra baggage to get my camera and strobes there, and never used the strobes once. This was twice the amount that I could establish should have been charged, although I didn’t get charged extra baggage on the way back. The extra baggage charges appear to be random.

Most dives had a thermocline at about 16 metres which was about a meter or more thick and made sight very fuzzy and photography impossible, deeper than this was much colder. 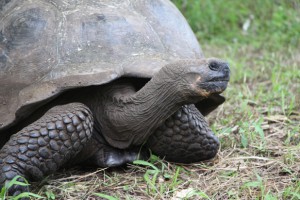 We were allowed to use gloves, which were important for holding on to the rocks which were mostly covered by large and sharp barnacles, and which occasionally came off. Also some spiny jobs which you certainly wouldn’t want to grab! The guides didn’t use gloves. 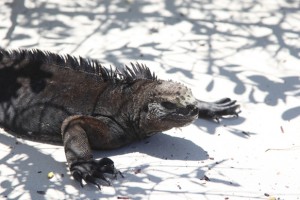 I was getting water temperatures of 28C on most dives although it didn’t feel that warm, I used a 7mm full semi, hood and gloves, except Punta Vincente Roca which was 18C.

My max depth was 25m, again on Punta Vincente, the rest max was 23m.

The boat crew were a bunch of very helpful guys at all times, as were the 2 guides, Santiago and Natasha, who also really knew their stuff, both about marine and above water natural history and geology. 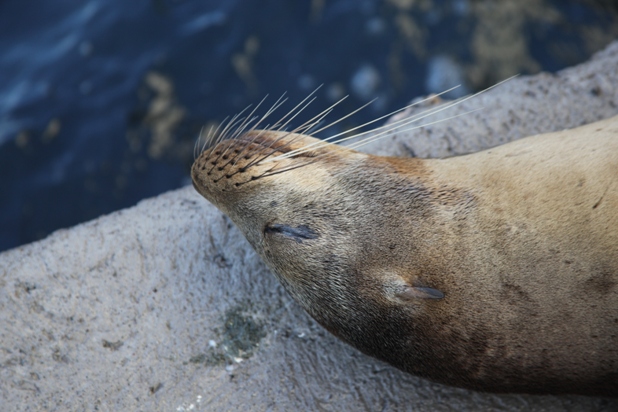 Sleeping sea lion on the prom in Puerto Ayora. 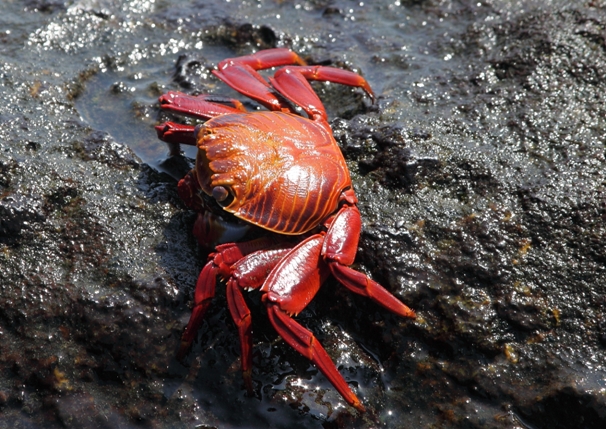 Sally Lightfoot crab Grapsus grapsus. They are all over the rocks on every seafront. But not easy to get close enough for a decent ‘photo. 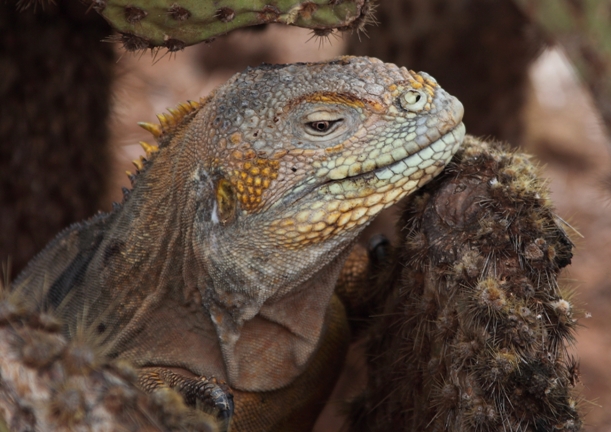 Hybrid iguana. They have marine fathers and land mothers, and are infertile. 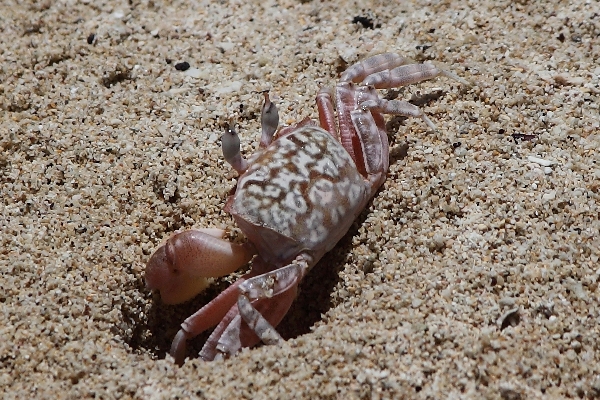 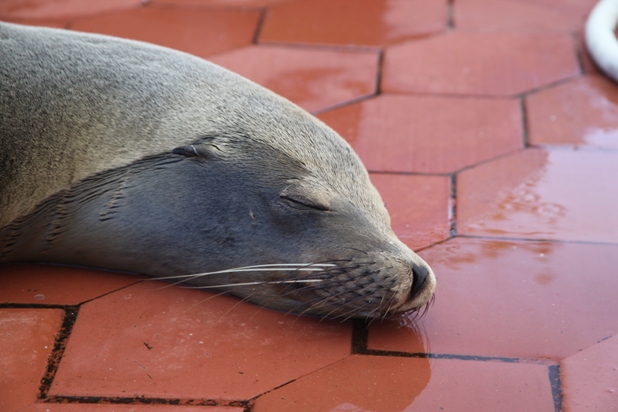 Another sleeping sea lion. In the fish market on the prom in Puerto Ayora.