It was a very early start (5:45), to get to Pembrokeshire (from Bristol) before the bank holiday crowds but with the motorway & subsequent roads clear we arrived at the appointed meeting place – Dale car park before 8:30 🙂

A comfort break & then Tim & I started kitting up. Pete, Rob & Geoff arrived shortly thereafter and a dive brief settled it: we were 5 divers with Rob coxing and we were off to dive the Dakotian!

The 400ft long Dakotian, a 6426 ton British steamer was the victim of a parachuted magnetic mine and sank in Dale harbour on the evening of November 21st  1940. The mine blew out part of her port side and she sank very quickly, fortunately with no loss of life – her 48 crew made it to safety.  She carried a general cargo, including 1300 tons of tinplate and Christmas puddings and bicycles!

This is one of the best known & most accessible wrecks in this area & really fast to get to & find so we had the shot in by 10, Geoff then went in with David while Tim, Pete & I formed a trio and quickly followed.
From a sun & cloud surface conditions we descended into visibility that was initially 2 metres at best but this later opened up occasionally to 3 or even 4 metres giving us the chance to appreciate the true scale of the wreck.

A buddy pair we came across on the Dakotian

Proudly sitting atop some prominent wreckage we came across our first life: a spider crab & dogfish enjoying the peace while further on wrasse appeared & bib hid just out of sight under the liberal scattering of plates & spars.

We drifted off the wreck for a brief period & rummaging among debris from the superstructure I ran into more dogfish than I’ve ever seen in one place, all lazily relaxing on the bottom. Some reports talk of an intact prop-shaft & rudder and in the holds, bales of tin plate with the topmost maintaining a bright mirror surface after 60 years; we didn’t find these 🙁 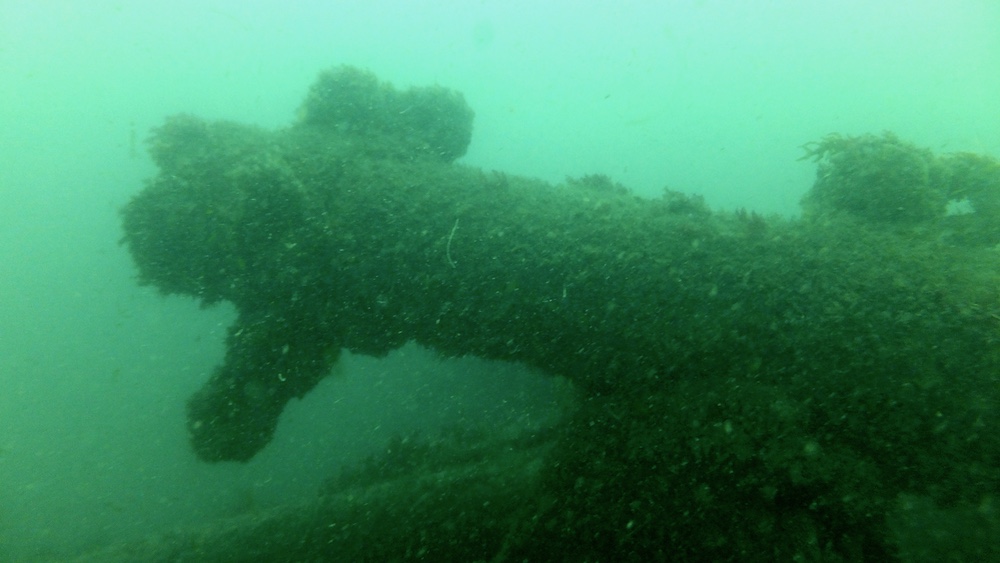 As we continued our exploration we came across huge bollards, the steering gear and thick tubes that might have been masts & cogs from a drive shaft/gear system of some kind. Spider-crabs were in plentiful supply with more dogfish & wrasse among the extensive wreckage.
There was no real sense of shape to the wreckage but with so much to explore it didn’t matter & the time to go up came far too soon – Pete deployed his DSMB and we ascended. This was one we’d have to do again!

With Claire & Luke stuck in bank holiday traffic we grabbed a bite of lunch & then headed out for our second dive of the day this time in Mill Bay, the last bay before St. Annes’ Head.
We didn’t have a particular objective in mind but there was apparently wreckage of a number of boats & even a sub somewhere in the area so with hope in our hearts we jumped in. 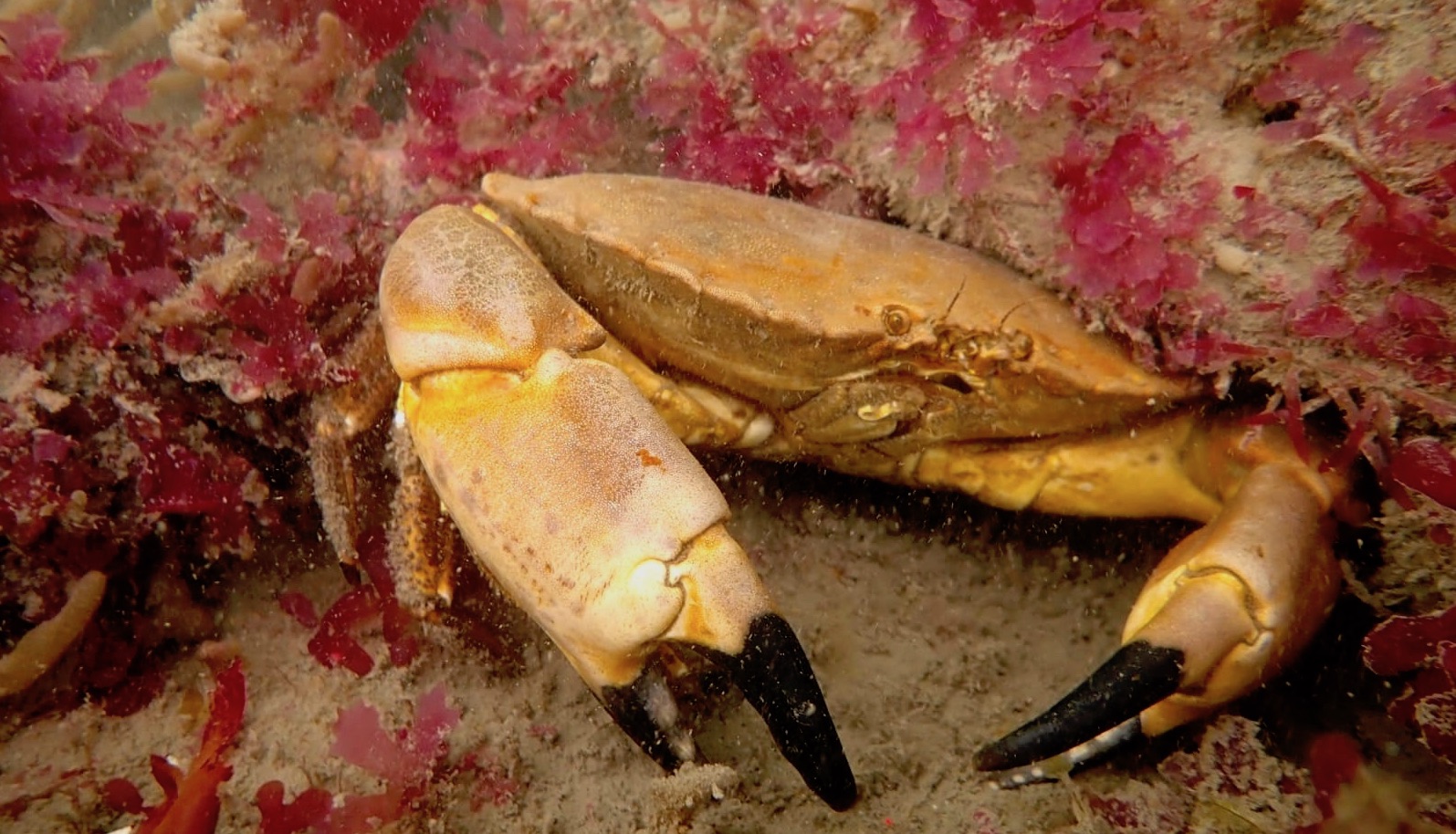 Depth averaged around 10 metres and the visibility wasn’t the best. Huge forests of kelp broken by rocks greeted us at the start before petering out to sand as we headed north; after a few minutes we realised this was a literal desert from a life point of view so we opted to parallel the divide between kelp & sand.
I was leading & on Tims’ suggestion I slowed the pace & we started rooting in the various crevasses & under the kelp & Tim found some pottery & I found some unrecognisable metal fragments. We were watched by the usual dogfish & spider-crab suspects and after we came up Tim mentioned he had seen a really big ray.

Claire & Luke had arrived when we returned and so they went out with Rob to experience the Dakotan while Tim & Geoff peeled off to get 12 cylinders worth of air at Haven Diving Services ! I headed for South Cockett campsite to put up my tent in our Aerodivers enclave (a very nice site it is too with a very friendly chatty owner) and once refreshed we met up in Broadhaven for a very nice mean in the Sunshine italian and watched the sun sink over the bay.

Could be Mos Eisley in the distance! (view down Dale Sound)

The rain & strong WSW winds forecast for today (Sunday) duly arrived and so we examined the options (having talked them through last night) and decided to opt for the wreck of the Behar on Great Castle Head.
The original plan had been to launch from Broadhaven & try for the Hen & Chicks or Skomer island, both places the club has dived before & over which Tim will wax lyrical (apparently deservedly so) given the chance but with a strong west south westerly straight onto the beach if was not to be. 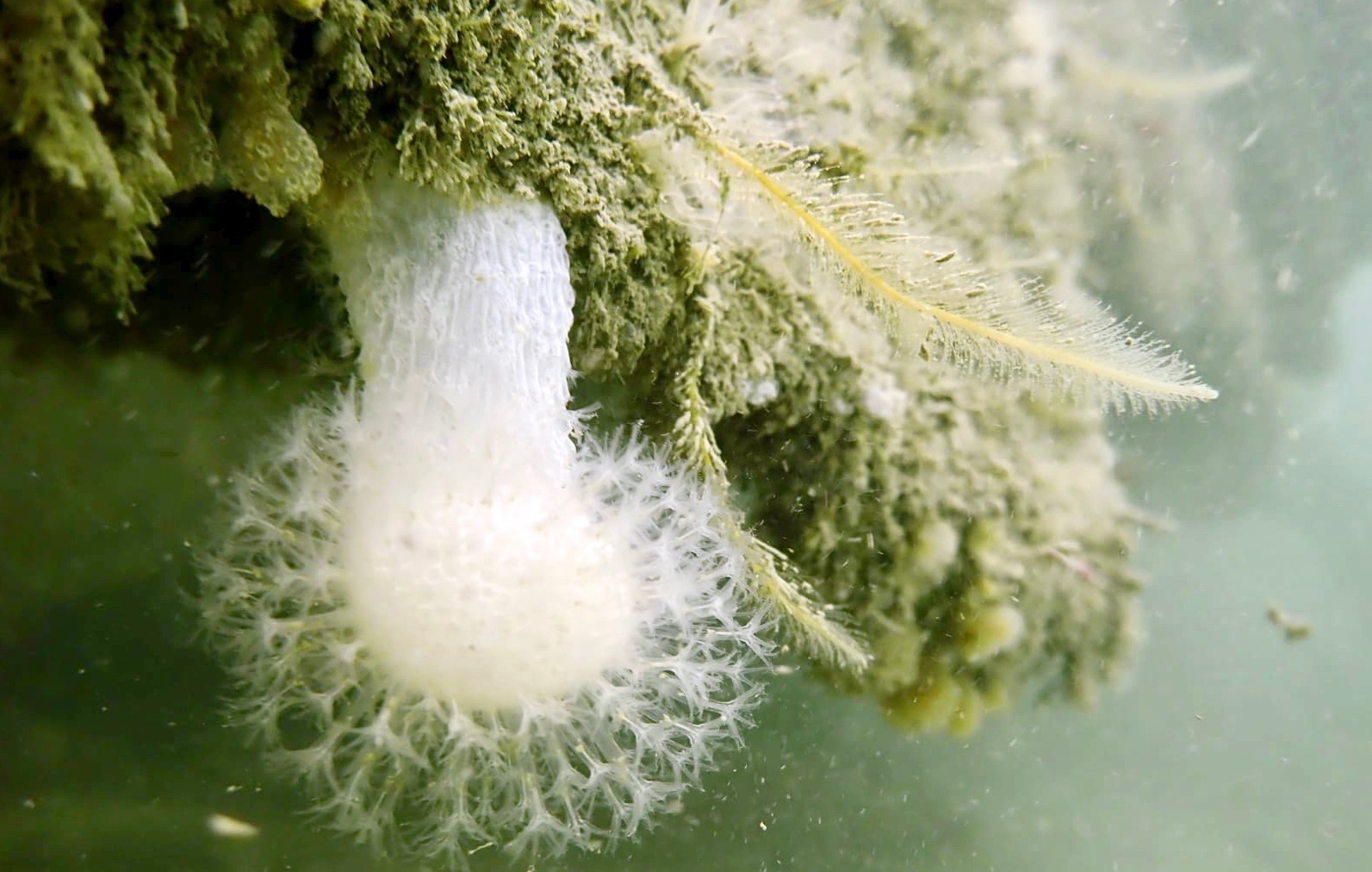 Sure is pretty down there!

On our way to Dale Tim & I dropped into Broadhaven to get some change for the car park in the shop (& some welsh cakes!) & physical sight of the breakers hitting the beach reassured us we’d made the right choice.
At Dale we kitted up, launched the boat & headed out into the drizzle (the forecast promised things would get better)  Claire, Luke Tim & myself for this one with Pete, Geoff & David on the second wave.
Certainly rougher on the journey out we passed the Dakotan cardinal buoy as we headed further east to the Behar cardinal. The transits Rob had were that it was halfway along the line between the white buildings on Great Castle Head and the cardinal & the echo sounder spotted a very large lump so we shot it and Claire & Luke kitted up. Meanwhile a large dive boat approached & dropped their shot around 50 metres further west. We opted to stick to our shot & Claire & Luke dropped in followed shortly by Tim & myself.

The 6,100 ton SS Behar was a cable laying British Cargo Streamer that was the victim of German mines on 24th November, 1940 when leaving Milford Haven. She was part raised for scrap and the remainder blasted to pieces, She lies on sand & rock in 15-20 metres with a maximum height of 10 metres

The shot took us through some kelp to some rocks & not more than a metre away we came across plate which led to a huge smooth boulder to my right – nope not a boulder but the hull, broken only by rivets.

Tim followed the hull until it was broken & we proceeded to investigate an enormous amount of wreckage including the biggest drive shaft I’ve ever seen, the only remaining boiler (originally there were 5) & a large intact section of hull which though quite smashed towered 8 or more metres above us through the milky 3, max 4 metres of visibility.

Fish hid under the plate while spider crabs manned the girders. A lazy dogfish refused to be startled out of its’ Sunday rest as I circled for a good photographic angle. After a good hour among the huge spools of cable, steel buoys and other assorted debris we reached the time to surface – an hour very well spent!

Returning we heard Claire & Luke had ‘opted’ instead for a large rock with numerous gullets & crevasses hiding lobsters, wrasse spider crabs & had a very interesting dive as well.

The weather was getting better as we headed back to Dale where Pete, Geoff & David were ready. Luke & I decided to call it a day at this point & so Tim & Claire went out again.
Luke & I headed off to the local cafe (Marloes Village Store, Cafe and Post Office) grabbed a very reasonably priced cream tea and settled down in their garden with great visibility of the harbour for a casual chat in what was now bright sunshine
When our comrades returned Tim indicated he had buddied with Claire & acted as an expert guide round the wreck as if he’d only done it an hour earlier! Meanwhile Geoff & David had a marvellous 59 minute dive but Pete had some trouble with his equipment & so had to call it a day.

Just in case you missed me earlier! 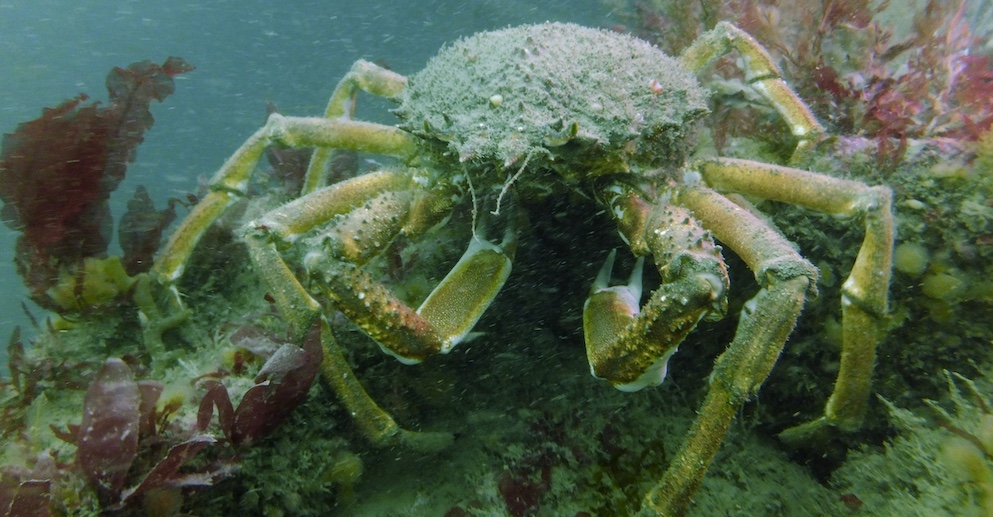 The day clearly called for refreshments & Marloes duly delivered the most marvellous rum & raisin ice cream, which they indicated they had trouble making fast enough & keeping in stock!

Finally it was time to pull out the boat & ready everything for the trip eastward and home!

Though things had not exactly gone to plan we agreed our time had been well spent, the RHIB had behaved nicely with 5 divers and a cox and we had seen our fill of dogfish but we should certainly make a return visit with the aim of fulfilling the intention to revisit those fondly remembered dives off Broadhaven!

Heartfelt thanks go to Rob for organising the trip & being the most considerate cox ever for the whole weekend, his family for putting up with him and everyone else for making the trip & the weekend a memorable success.

My thanks also to Geoff & Tim for the photos.

When the boat comes in…