“For those who missed the weekend, it were Grand (as us Northerners say).  Don’t miss the next one!” – John C
Friday 26th August
The family Boyes along with Neil & Kath were already in-stu at the Trevair campsite as Jan & John joined them for a few drinks and as conversation turned to tides & launching it was decided to launch at Penzance – a very good decision and one we kept all weekend
Saturday 27th August 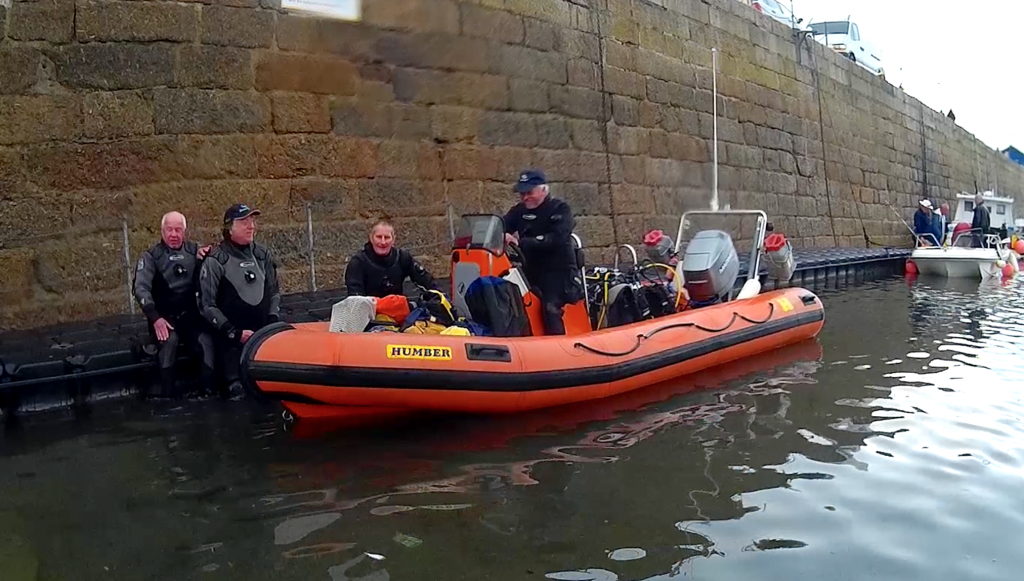 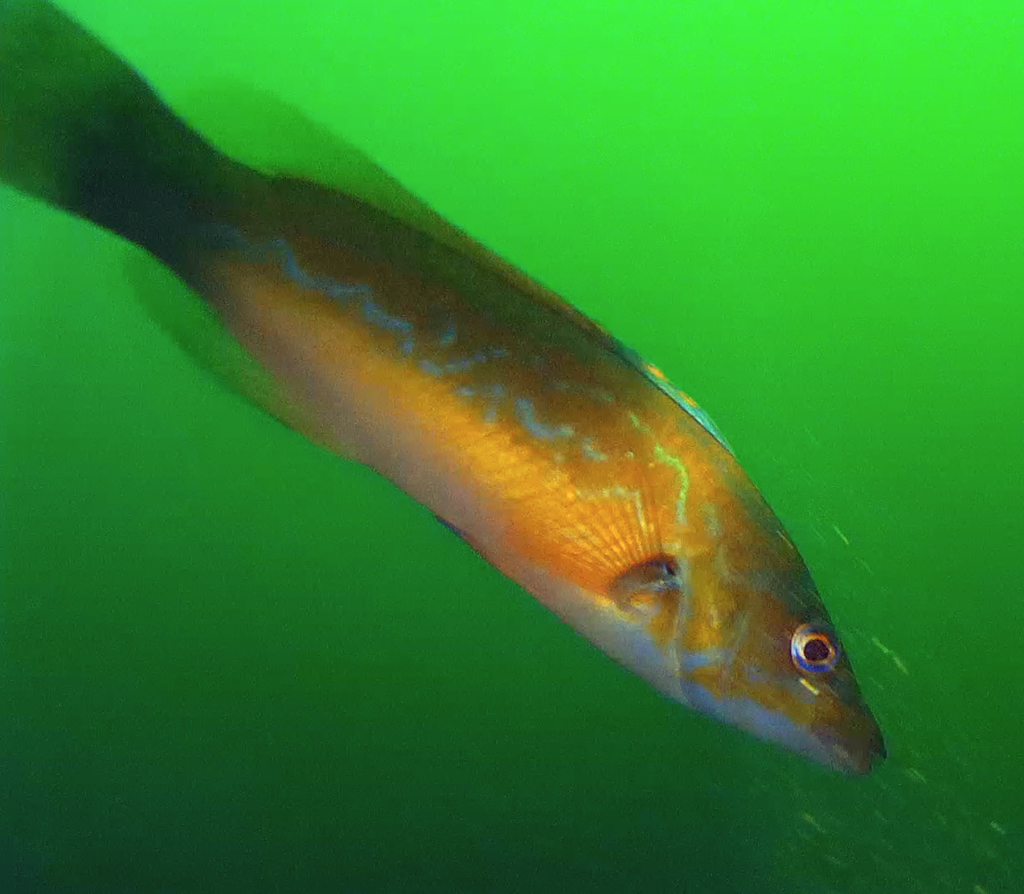 This is my best side

The first dive party of the weekend was Tim & Chris, Neil & John and Simon & Jo taking the Assault out to a very nice reef North-West of Low Lee & similar to how Tim remembered Low Lee – minus the wreck and cannons 🙂 Tim & Chris saw a small sole and a large plaice and in the interests of tidiness Tim also sent several blue gloves to the surface by exhaling to trap air into the fingers.Visibility was not too good but it was at least a chance to get wet. 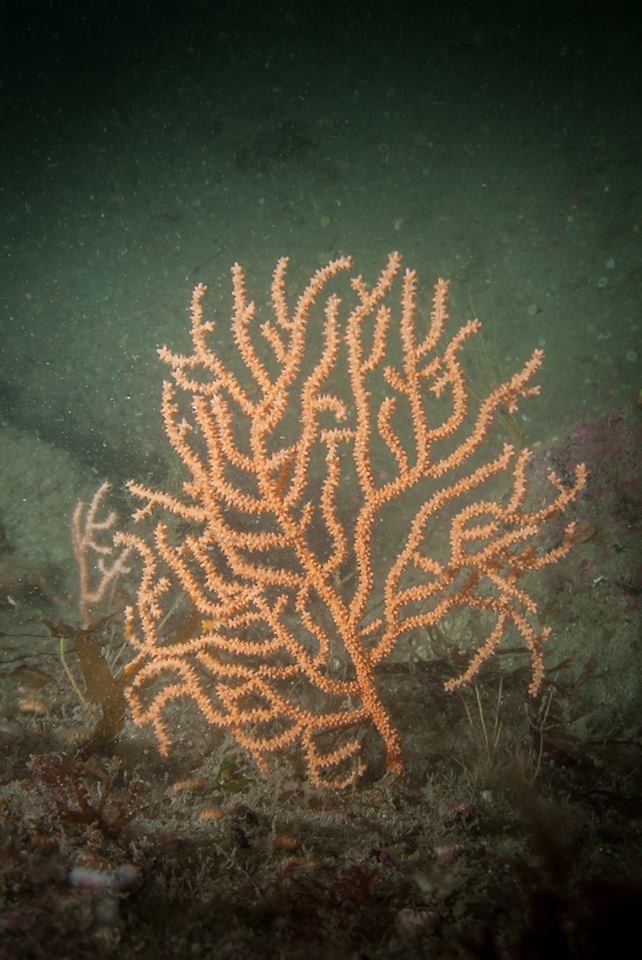 Tim was tail-end when suddenly a massive shiny silver something flashed past him inches from his face and made him jump! The vis was about 6m so he turned to follow it and instantly recognised it for what it was and literally screamed into his reg to get the attention of Chris and Jo – it worked! . They turned to share the encounter. It returned a further 2 times (that they saw – may have been more). The party then did several circuits of the fairly small wreck finding various other critters on the way including jewel anemones and red fingers
Geoff and Rob also saw it, but all regretted no-one had a camera to capture a photo or video of it. Tim had seen them on the surface before on a number of occasions, but this was the first/only time he had been lucky enough to see one in action underwater. Boy can they shift!!!
This dive would henceforward be referred to as sunfish alley!  Sunfish references here
Kevin arrived early Saturday evening; traffic, despite the bank holiday, having been light on the M5/A30 & popped his cylinders in for a fill amongst the ranks of other club cylinders. Up with the brand new tent – first time camping in at least 10 years and then off to a curious pub called the Admiral Benbow; for dinner with the rest of the party; service wasn’t the fastest but the food was good.
Sunday 28th August
A reasonable nights sleep then up at 7 for a 7:30 getaway to Penzance to launch the boat.
Dive 1: SS Primrose
The town  was pretty sleepy as we pulled into the harbour car-park around 8:15 & we were soon suited up & on our way to look for the SS Primrose 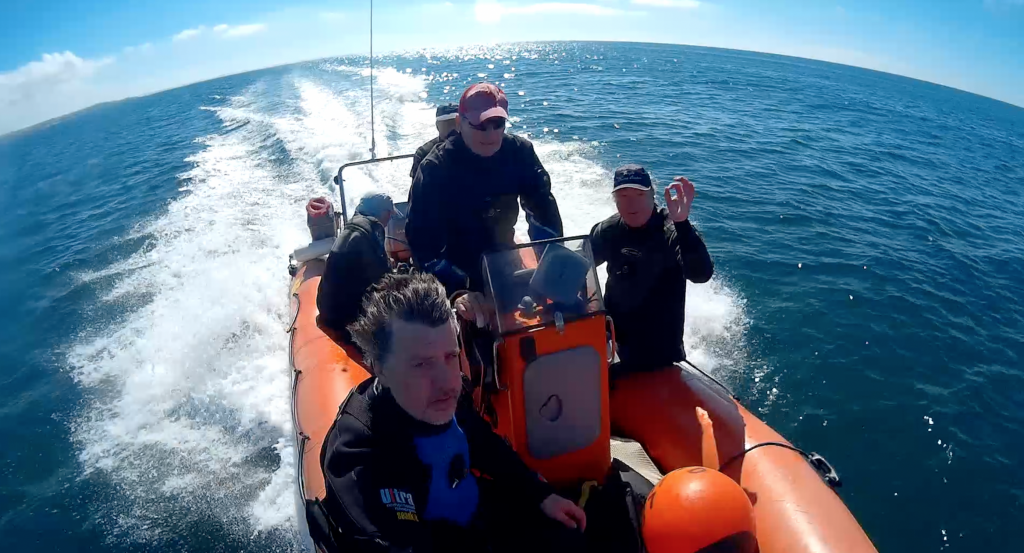 The Steam Ship (SS), Primrose was launched Saturday, 17th January 1885 at a length of 135 feet, and a tonnage of 272 grt. and wrecked on Low Lee Ledge, Mounts Bay Cornwall, 23rd August 1906. Her Master misjudged the distance from the shore after being caught in dense fog on passage Garston to Newlyn with Coal. Depth to 21m. 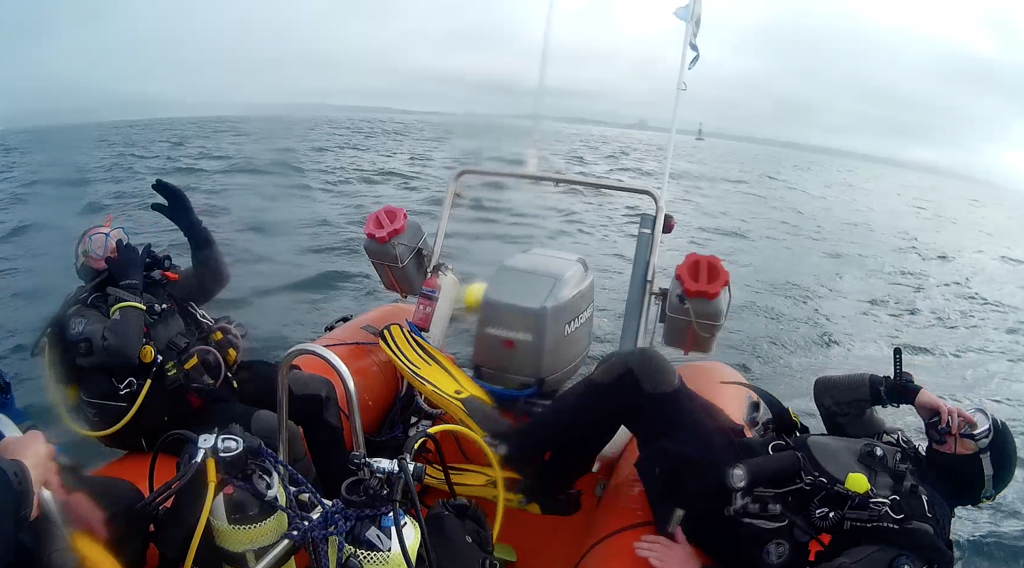 Tim coxed & we borrowed a line from a boat at the site chartered for archeology (the Son of Calu, the same boat & the same owner: Bill Bowen as Simon & Jo had used in 2004!) and our first wave headed down: Chris H was with me, we went in last after Rob, Geoff, John & Neil.
Lee Ledge is very distinctive on the echo sounder with with depth out in Mounts’ Bay rapidly dropping as we traversed over the reef; viz was only 2-3m, & there was plenty of rocks and abundant vegetation & large shoals of Bib and the ever inquisitive Cuckoo Wrasse but Chris H & I only found pieces of the wreck right at the end of the dive after which we practiced separation drills & surfaced within 5 metres of each other. It turned out most of the others managed to find it relatively easily & talked about the huge cannons & other debris.
Dive 2: SS Primrose (again!)
Back for a short comfort & lunch break & time for wave 2 with Jo B & Simon joining the party.

This time after sharing advice with the veterans of the previous dive Chris & I managed to find the wreck by following the line down to the cannon (not part of the Primrose but another unidentified wreck) & then a smaller rope to a bigger rope & then keeping the reef on our left following that. There were plenty of quite large pieces, along with kelp, anemones and plentiful fish of various denominations, viz was improved on yesterday. Others in the party reported seeing an edible crab & small crayfish.
In total we got 18 dives in 3 waves in and back to base by 6pm – professional or what!
Back to the campsite for a spruce up & then out to the The Dolphin in Penzance where drinks, food and service were exceptional & we left the waitress a generous tip and then it was a swift goodnight after admiring the vast array of clearly seen stars overhead
Monday 29th August
Dive 1: SV Alice Marie
On October 4th, 1908, the French steel barque Alice Marie (built 1901), 85m long and 2.181 grt. sank after hitting the Runnelstone in thick fog.  Large portions were lifted for salvage in 1986 but there is still significant wreckage left. Depth: 23-27m
An early start for the advance party (Neil  & John, Geoff & myself with Tim as cox) on a day that was looking to be a scorcher. After discussing & populating co-ordinates at some length & the heading for the site ( in Penzance bay) the echo-sounder showed nothing so we dropped the shot on one set of likely co-ordinates & Neil & John went in, They returned 10 mins later saying there was nothing. 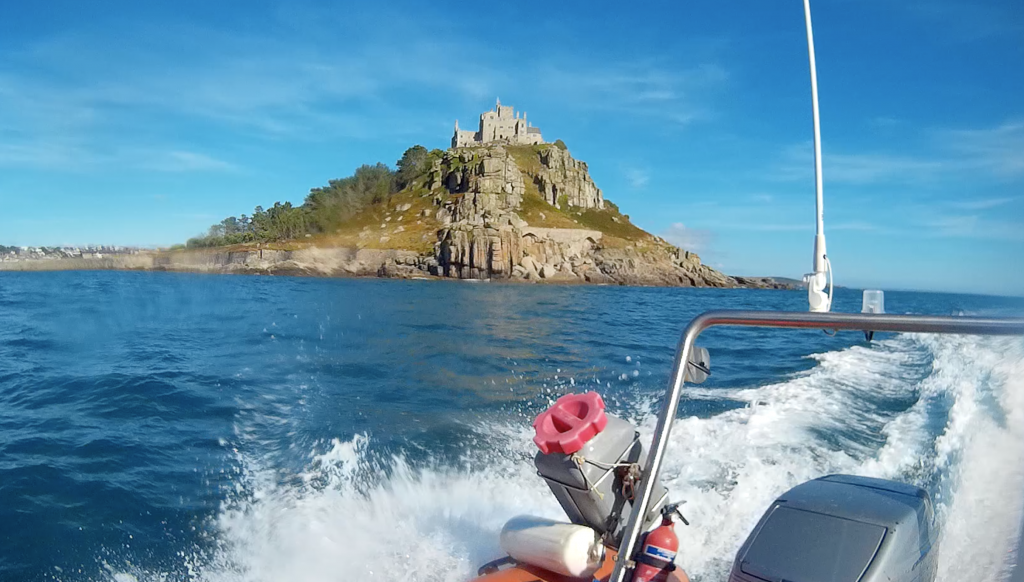 Geoff & I opted for a circular search from the shot & attaching a line we headed North, suggested by Tim as towards another set of co-ordinates that had showed nothing. For a while traversing the barren (very barren) sand we wondered if it would be fruitless but then after 40m we saw a shadow & an upthrust spar that didn’t look natural – it was the wreck!

Although quite flattened, the spars & ribs were unmistakable; wrasse & bib were everywhere with some particularly large specimens at the bow and what’s more viz was improved too! We had been told it was buoyed & it looked like it had been but the buoy was gone leaving only the line
After an enjoyable potter among the remains observing the starfish, plumose anemones and other denizens (Geoff spotted a conger) we returned & persuaded Nick & John to have another go now we knew where it was & as we thought they would they thoroughly enjoyed it, seeing two very large Pollock and a conger eel’s head that meant he was no baby!
Dive 2: Seghy Rock

Seghy Rock stands a few metres off Cripp’s Cove on the Logan rock peninsula on the coast off west Cornwall; average depth of the surrounding sea is around 21m but can go to 30m 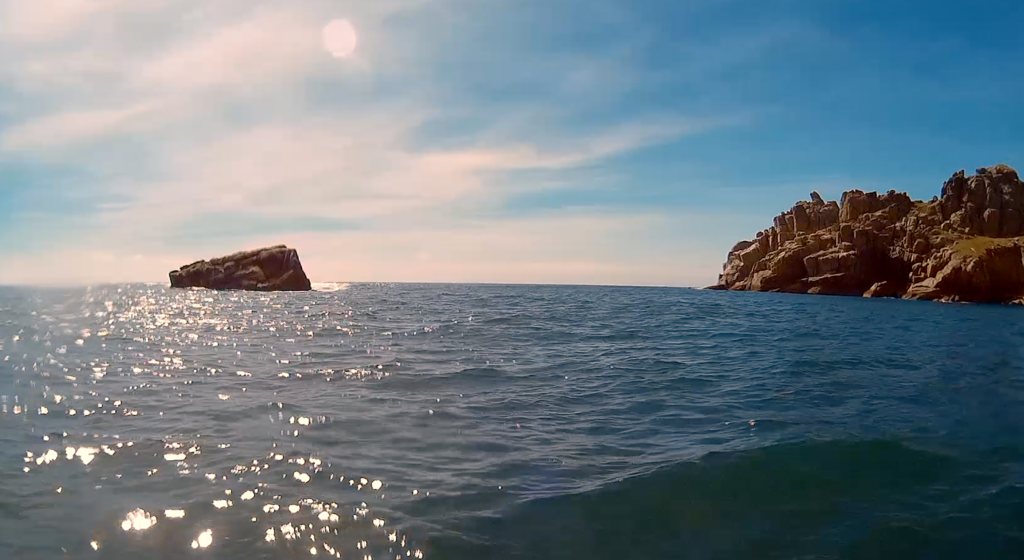 Just around the headland is a naturist beach but we didn’t venture that far :-O 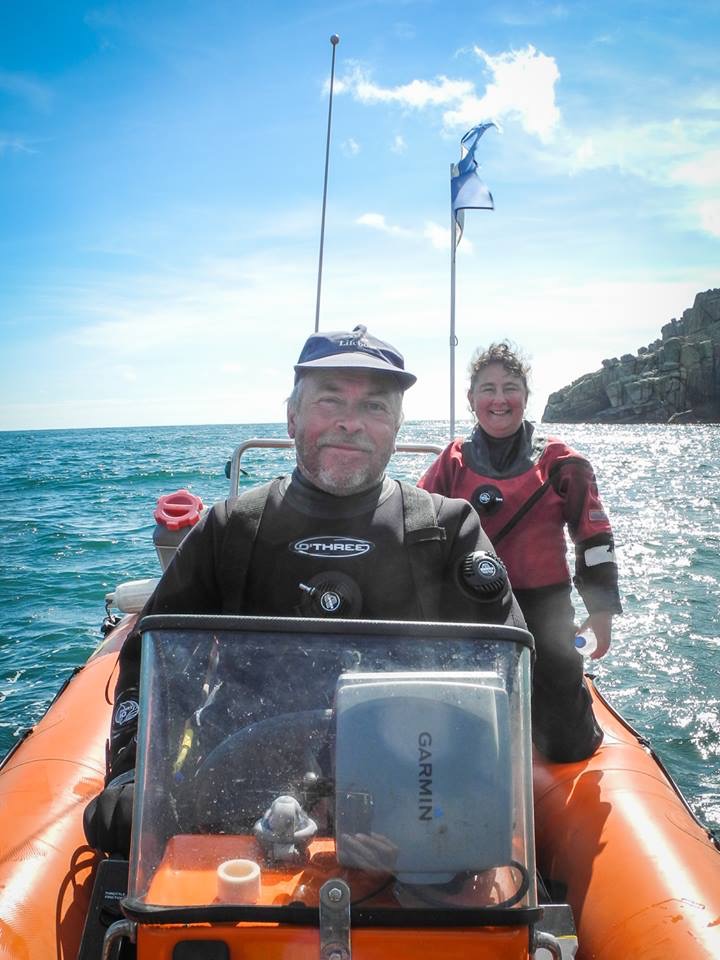 The joy of the sea!

A snack & cylinder swap before swapping out Neil, Geoff & John for Jo, Simon, Tim, Chris and Rob (and retaining myself – yay!) as divers. We headed west for quite a trek to Seghy rock, a rectangular rock rising around 3 metres and down to a jumble below around 25 metres.

Tim & Chris went in first & then after 30 minutes Jo & Simon, when Tim & Chris returned with tales of bright colours & plenty of life Rob & I quickly donned our kit & went in on the east side with the plan to circumnavigate the rock clockwise & then head northeast across the sand
We descended to be met with a scene of what looked like liberally scattered rough hewn giant building blocks at various crazy angles making for plenty of hidden holes and cave-like openings (Rob spotted crabs & lobsters trying to avoid the limelight (torchlight?) Large Bib & Pollack swam lazily among the rocks and kelp forest we came upon as we moved round the rock. Anemones of various colours clung to almost every surface. Once we’d circumnavigated the rock we headed North-West to explore the sandy bottom for sand-eels & other denizens, eventually coming across an empty lobster pot. 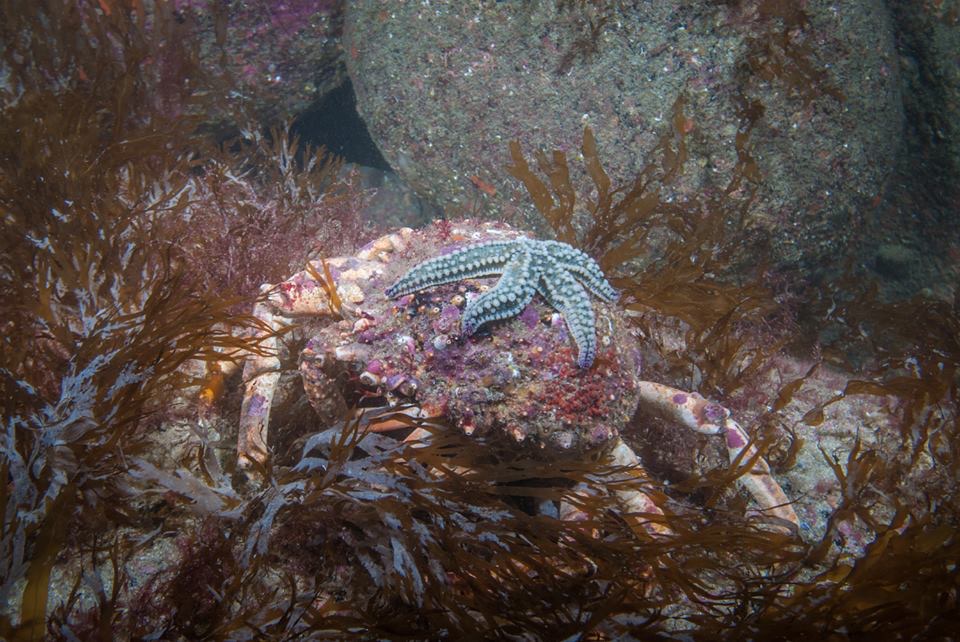 Returning we told our tale & decided the weekend had finished on a high, but there was more! As we sped back towards Penzance, passing near where Saturdays’ divers had spotted a sunfish on the Conqueror, Jo spotted another (or the same?) waving its fin on the surface – a lovely finish to a great day

Tuesday 30th August
The remaining 8 of us dived into Weatherspoons, Penzance for a very nice breakfast.
Scattered thoughts & ruminations (mostly from John!)
Arrival times of 8 am at the slip were stuck to brilliantly, daily launch by Chris and loading of kit and getting out of the harbour all went very smoothly – on Monday we left the harbour at 8:30!.  I don’t see this as accidental – everyone did their bit and that’s what makes club diving so much more than the actual dives/beasties
Reasons for everything going smoothly were, I think, due to:
a) non-diving cox
b) everybody ready on time
c) no “I forgot  x y z, so & so is almost here, can we wait etc.”
d) good weather – which was lucky!
So, for a larger group instead of two boats, with a non-diving cox on each wave; the next wave was ready to go as the boat came in, swap coxes with the 1st wave’s cox’s kit ready to be stowed and the new cox as one of the 1st wave divers: no surface wait and the boat could go out for the second wave.  Repeat the process for waves 3 & 4. 2 boats may be safer but it also doubles the chance of boat trouble
One more point to add about the BH weekend – the Boyes boys were a big help and contributed to the general ambience
Our thanks for Rob for organising the weekend, Chris for launching, Tim, Chris & Rob for coxing and to all the divers, buddies and non-diving family members for making the weekend run so smoothly 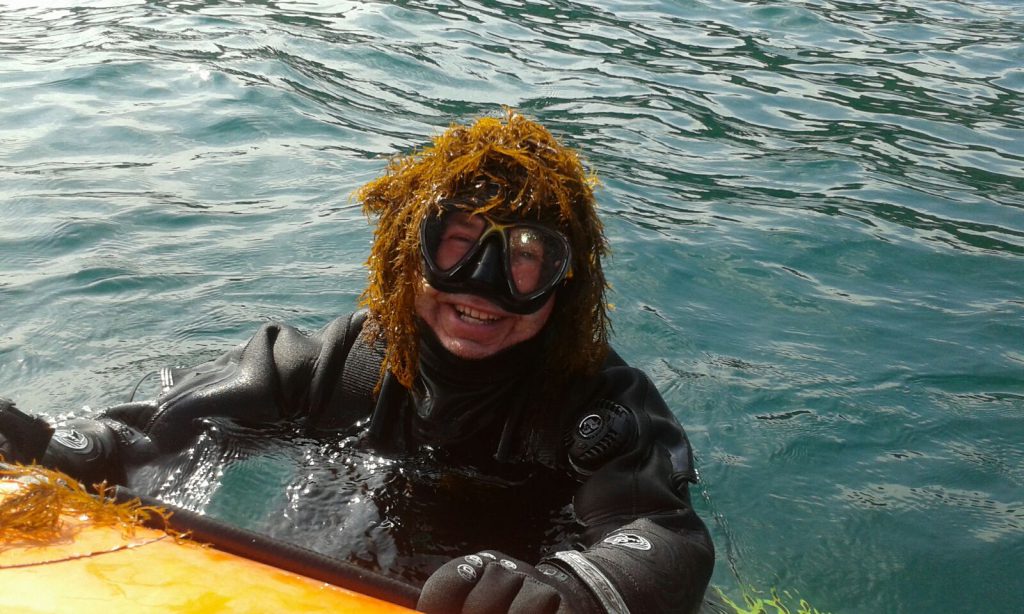