With the luxury set off to Indonesia it seemed only right that the real divers of the group 😉 showed them what the club is really made of so it was off to Plymouth for the weekend.

Saturday afternoon was the first dive of the day for me but the rest of the party had already had an excursion to the Persier in the morning & happily regaled me with tales of great weather, 10m viz, basking sharks & mermaids…well perhaps just the former two but I was hoping for great things!

After a fill from in-deep it was onto our RHIB, the Assault & away, the weather was waning after the delightfully sunny morning & so we opted for something a little closer to home: the Mewstone, an old, reliable favourite. Chris, Steve & myself were in first & proceeded to explore a number of the gullies surprising any number of tompot blennies of various sizes. Crayfish were also plentiful – I’ve seen more crayfish this year so far than in the whole of the two years previously, along with wrasse and various other fishy denizens. 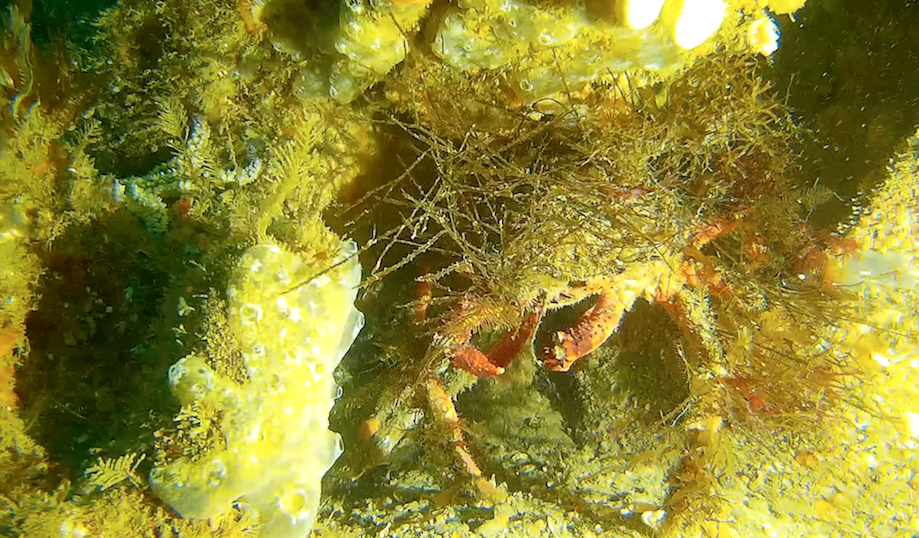 Spider crab in the Mewstone gullies

Our excursion through the walls of dead mans fingers, anemones & kelp eventually led to a sandy bed & we realized we were running out of no-deco & so headed back to shallower realms before opting to surface. 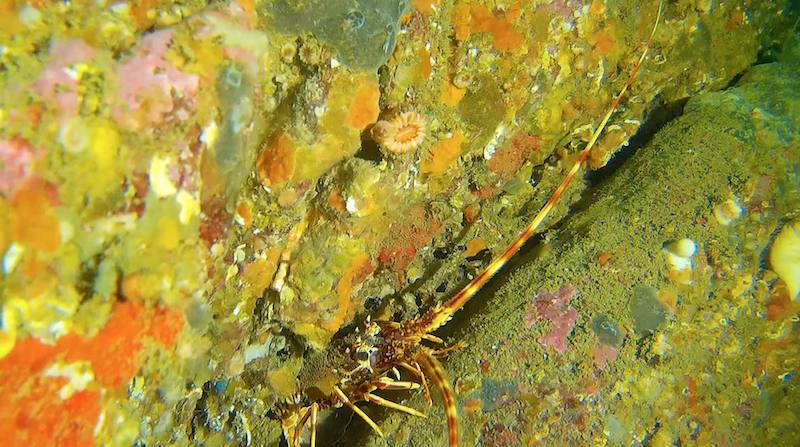 Then it was Abhi & Robs turn; while we we waited the weather started to turn further for the worse with occasional showers & more wind. Finally a DSMB appeared but no bubbles & then a second. Grabbing the first – they’d obviously had to let it go we stashed it & once we had them aboard denied ever seeing it until Rob looked so crestfallen we revealed our trick. 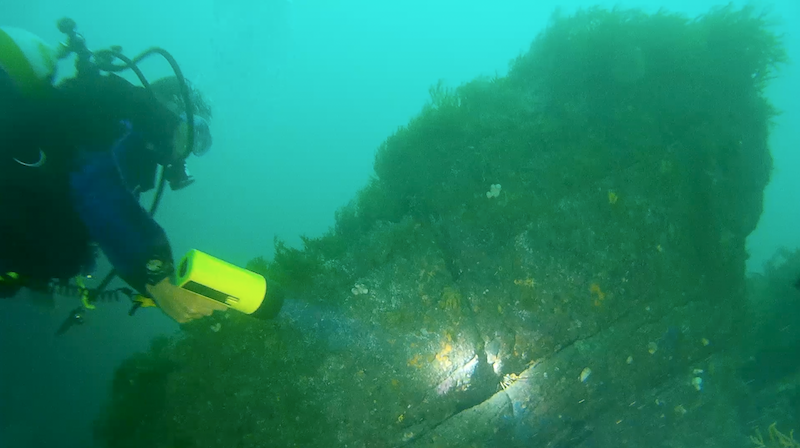 By now the rain had arrived in force and so Chris donned a mask & then used the boat windscreen to protect him from some very cold rain, however it had been a great dive & we assured Chris it was worth him enduring the pain 😉

Then it was back to Venn Farm’/Brixton Caravanning & Camping for Rob & to pitch our tents (Chris & Steve had come down on Friday) & scrub up for the evening meal. The local was chocker so we opted for The Ships Tavern which we knew to be reliable & they did us proud with some stunningly good value meals & some well appreciated pints of Doombar while Steve regaled us with tales of real diving & how clever rats were before it was time to head back to the campsite & to bed.

A night of intermittent rain materialized into a beautiful day as we were greeted by a dawn chorus of crows & then sheep – there is a field right next to the campsite! – very idyllic but also noisy at times!

With breakfast over, Rob & I downed our tents & we all headed back to Plymouth for the days’ diving 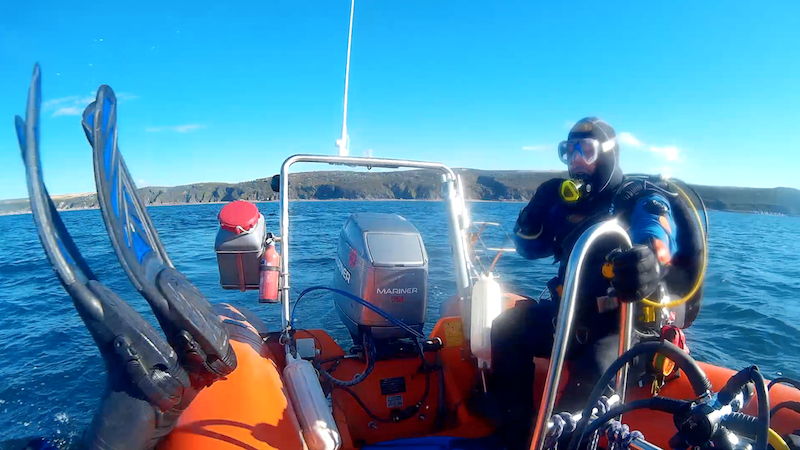 The usual elegance of diver entry

We had discussed any number of options in the pub but they all had their downsides – wrong tides, too far, nothing there so we opted for the James Eagan Layne, which a group of other divers indicated they had done the day before (& were off to do the Maine & Persier today) & it had been really good. 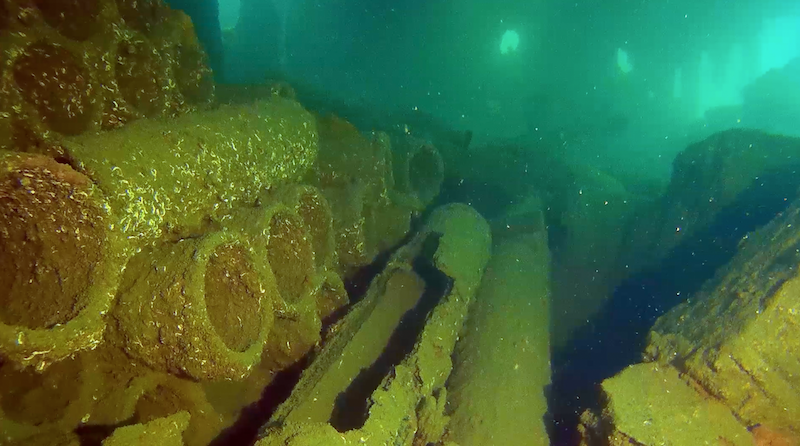 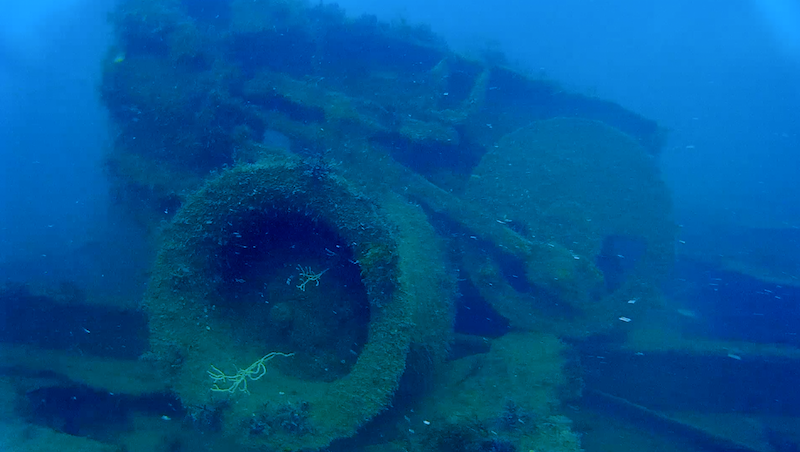 Without Abhi we reconfigured the pairs so Steve & Chris went in first after Chris located the wreck & Rob shot it & they duly disappeared down & didn’t return for nearly an hour – a sign of something good!

Rob & I were in next & from the shot (near the engines) we headed to the bow which is stunning and makes you appreciate how big the ship actually was before following the hull & then entering again & back to the engines; on the way a cuttlefish made a surprise appearance as it hove into my cameras viewfinder while I was filming & then changed colour to show its displeasure. 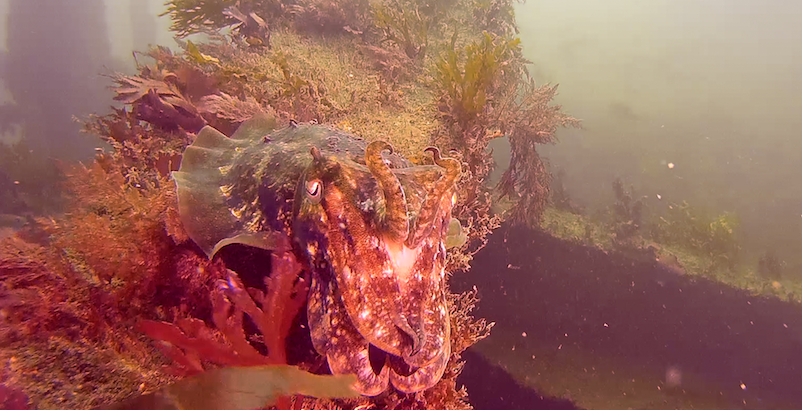 Elsewhere amongst the varied debris (most of which we were clueless as to what it was) were the usual large shoals of pollack & wrasse as well as more tompot blennies – including a very tiny one very possessive of its hole and a couple of cute crabs hiding in a pipe.

Rob took Tims’ place for finding things & located a hefty weight pouch that he sent up with a lifting bag. 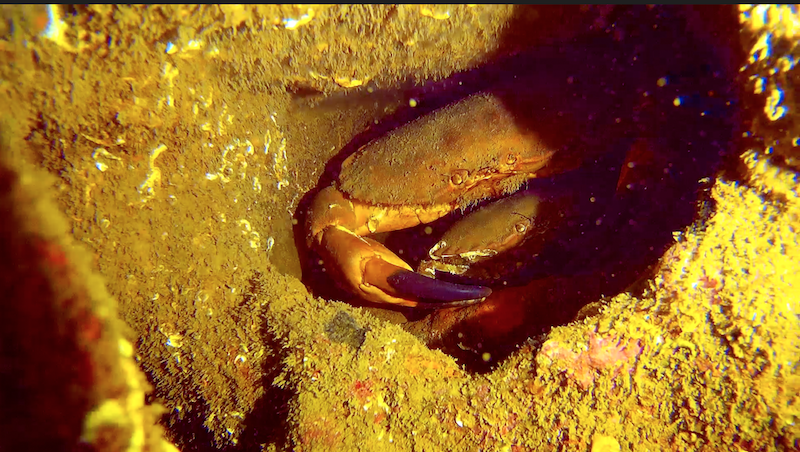 On returning to harbour we decided we’d had 3 really good dives & the weather had actually been pretty kind so we decided to call it a day, wash the boat, store it & hit the road.

All in all a very successful weekends diving & its a pity the Indonesia crowd missed it!

Thanks particularly to Chris for arranging things & Rob for towing & retrieving the boat & everyone for their enthusiasm & camaraderie. Looking forward to the next one! 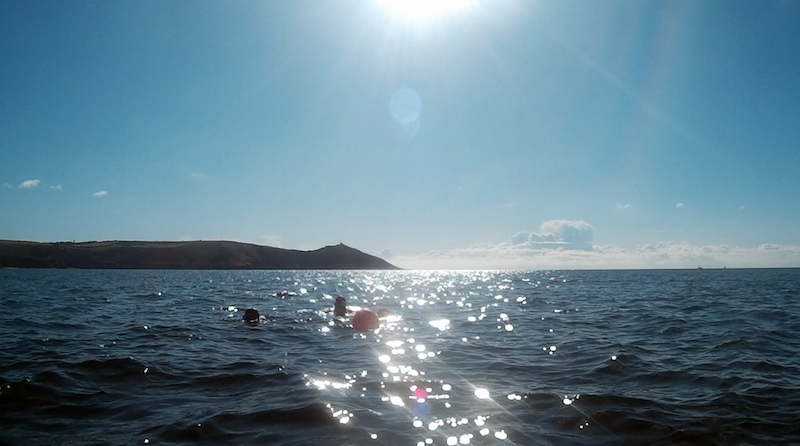 The end of another great dive!