This report has only just arrived (August 2008), some excuse was given about there being no internet in 1947 but this is a bit late by anybody’s standards; however, better late than never. 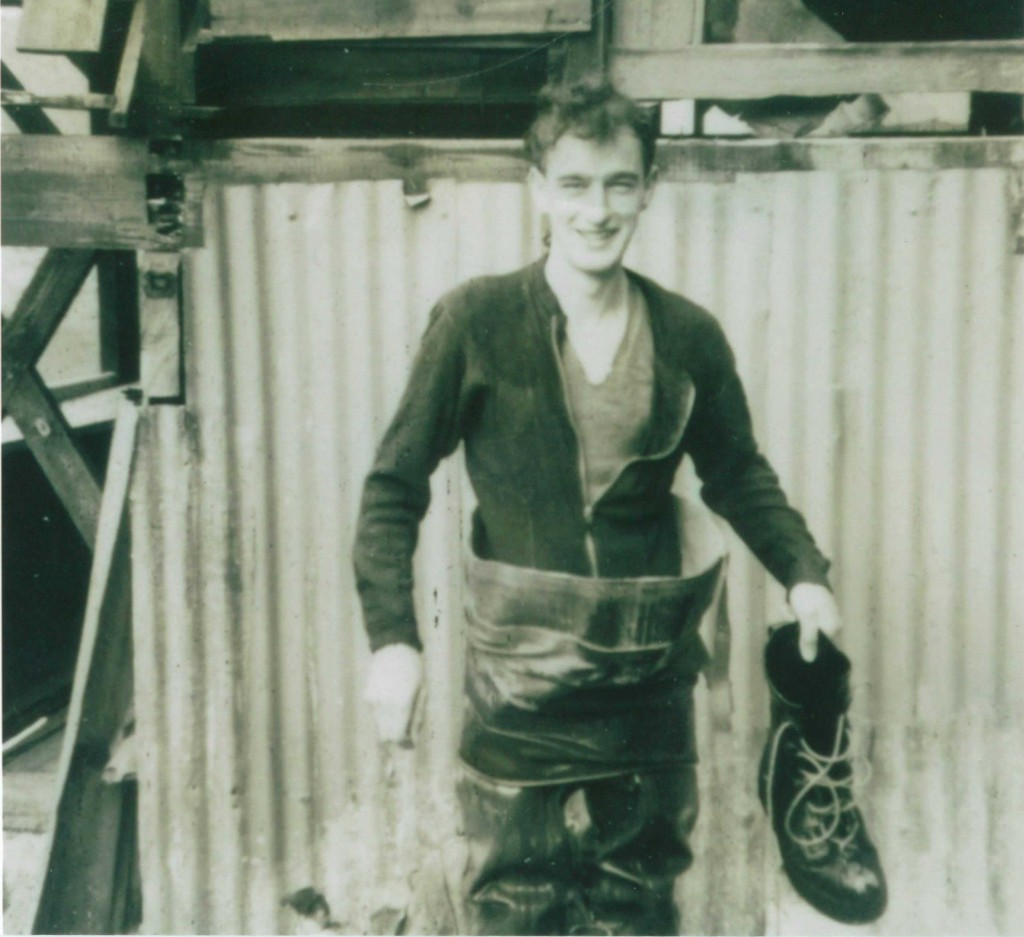 Here’s Dave getting ready to dive and holding a lead soled diving boot made of rubberised canvas. Each boot incorporates about 7 pounds of lead.
He is wearing the lower part of an Ex Navy Dunlop dry suit.
The upper half is the FNU – Frogman’s Fancy Underware.
The dry suit is a two piece which joined in the middle by rolling the rubber ends together and fixing with a weight belt. This prevented the emergency release of the divers weights. When asked if the suit was waterproof, Dave replied immediately
“No!”
So we conclude that it wasn’t very dry inside one of these !

Before this dive began, the Siebe Gorman rep arrived and asked if Dave had had his diving medical.
This was met with surprise this should be necessary, so the SG man said
“OK, just run up to that tree and back”, pointing to a tree about a hundred yards away. It was a warm day and by this time, Dave had his weight belt on with chest and back weights also, and those boots. Not the ideal running garb. The results of medicals were quicker to get than they are today, and they didn’t have to come through the post ! 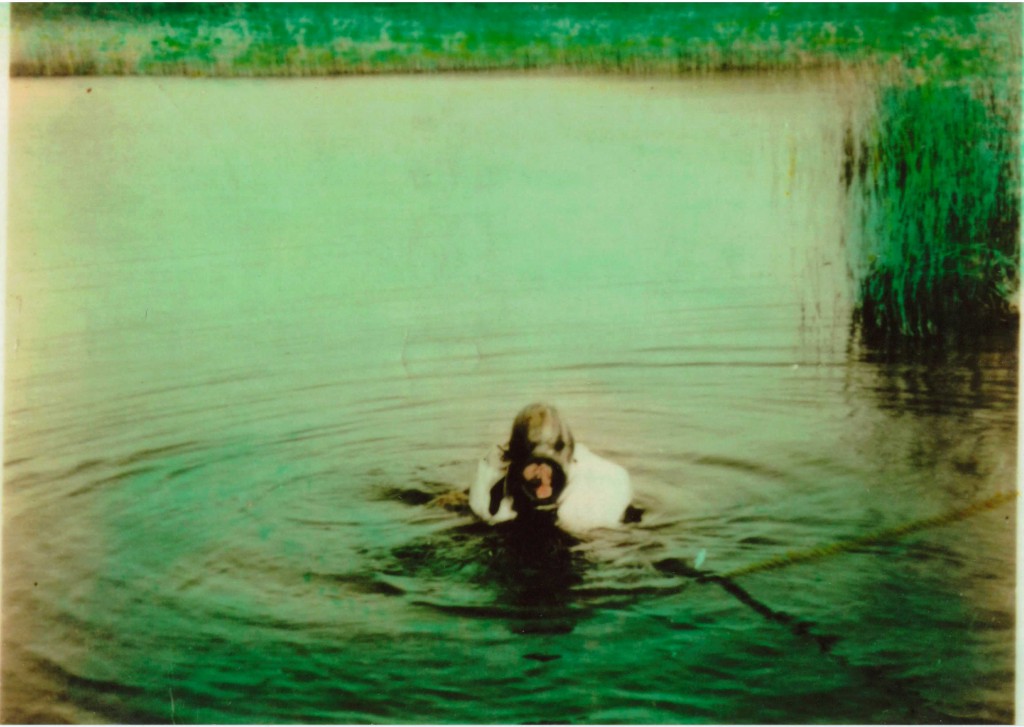 In 1947 it was very difficult to get hold of film, and it was only black-and-white.
This shot has been hand coloured.
A diver emerging from the deep, Henleaze Lake actually, in Bristol. 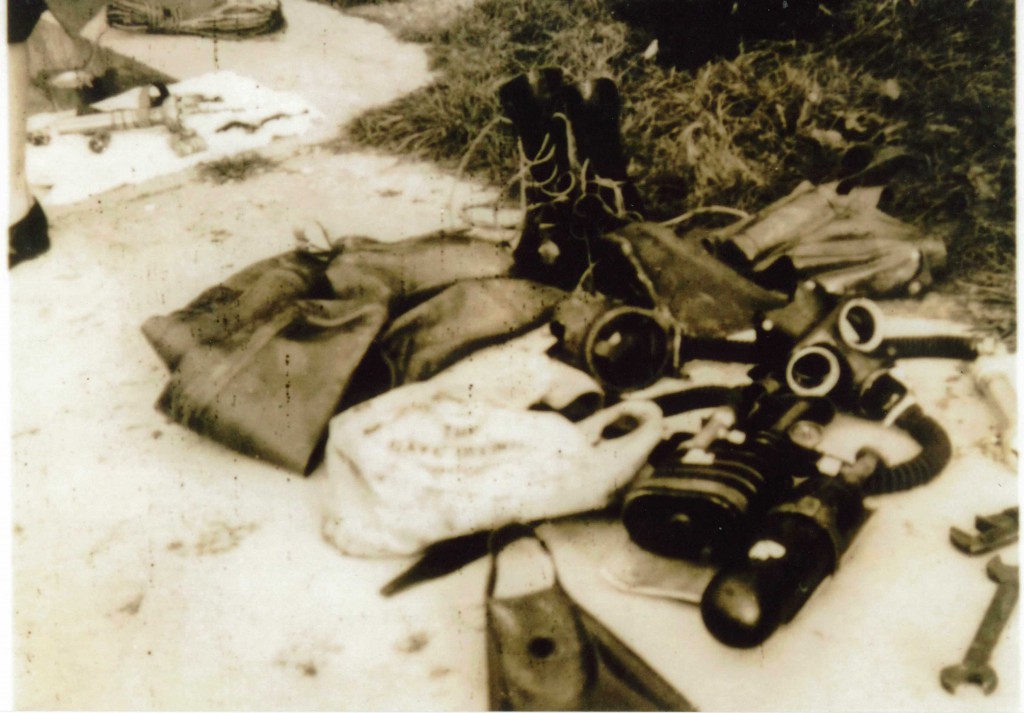 Picture of 1947 equipment of the CDG, the Cave Diving Group, going clockwise from top left, diver’s leg and foot, torch, boots, diving suit, fins, gas mask cost 1s each, another torch, another face mask, O2 tank, CO2 filter, breather bag. At the bottom of pic is a fin, and on the right are some serious sized spanners. 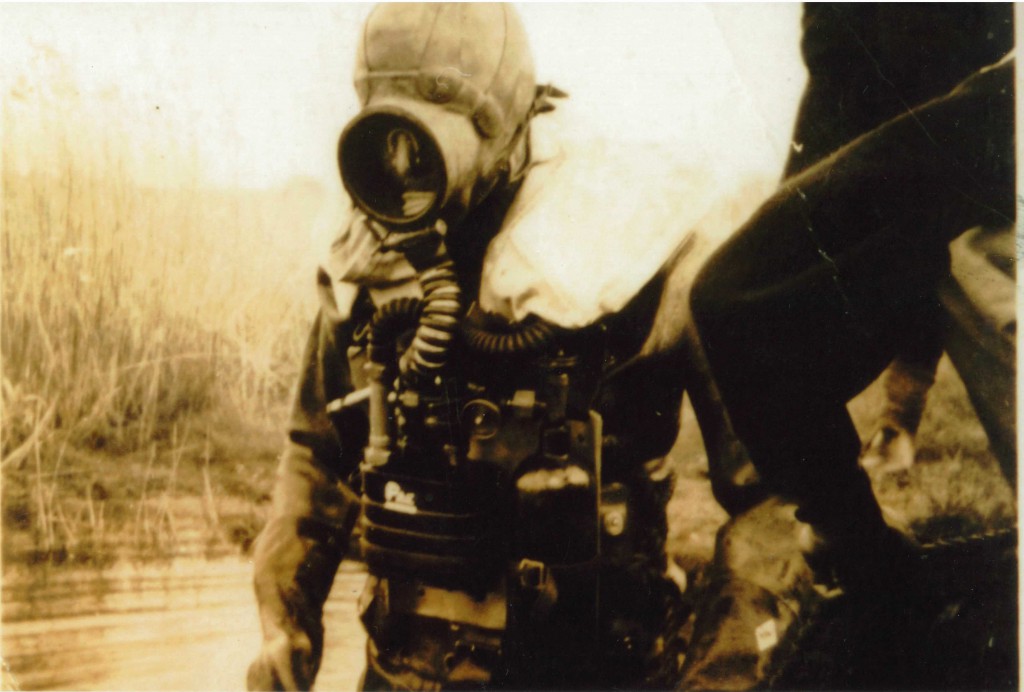 Here is the equipment in situ on a diver. On his chest is the CO2 absorber and the 6 cubic foot O2 tank. Oxygen was let into the breathing bag via a bypass valve which had to be operated manually. There was a height difference between the breathing bag and the divers chest, so breathing required some effort. At more than 30 feet, the 100% O2 would start causing the lips to tremble indicating the onset of oxygen toxicity, so the dive had to end. 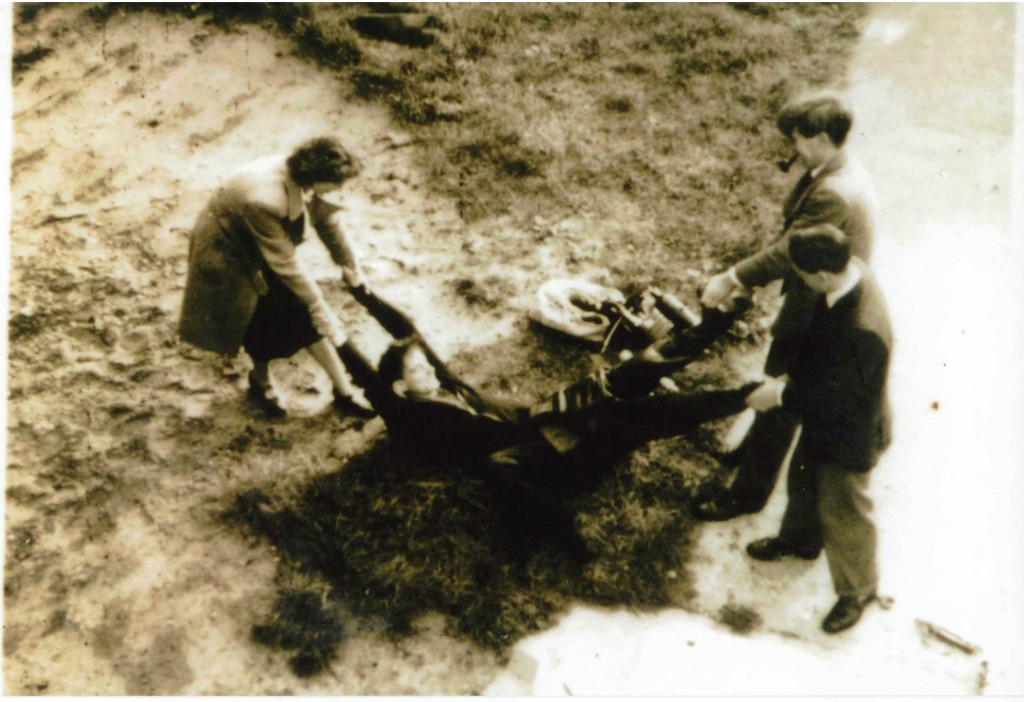 This is Dave being extracted from the bottom half of his dry(ish) suit. Two chaps against one “gal”, and a pipe is definitely needed for this sort of operation. 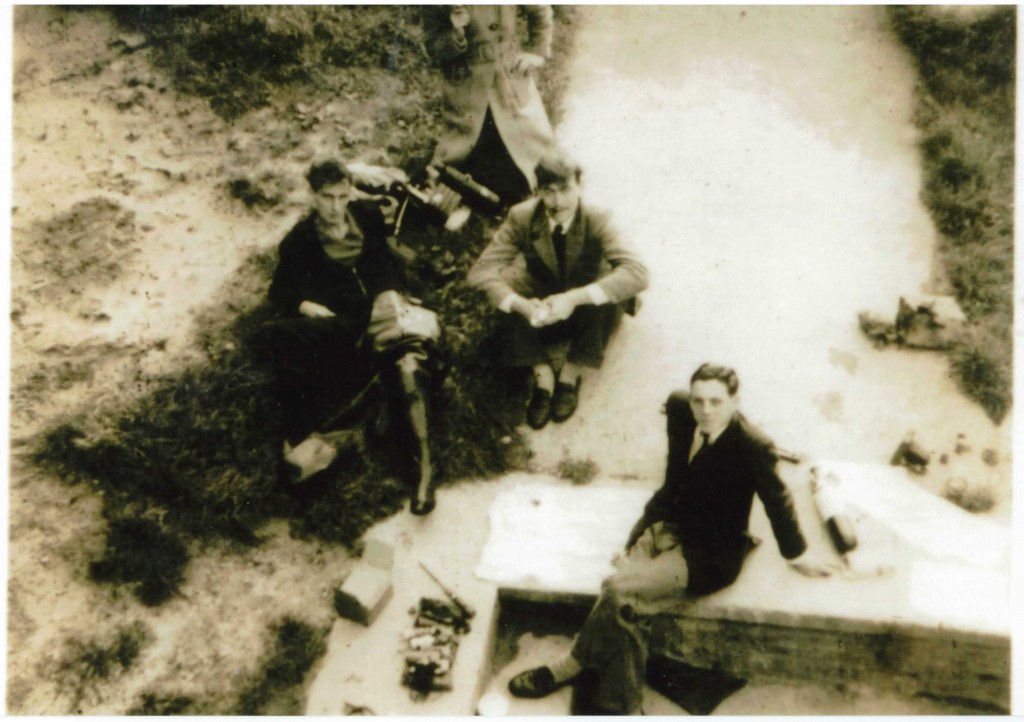 This is a picture of Henleaze Lake by the old diving stage, high diving not SCUBA. It’s not there now apparently. 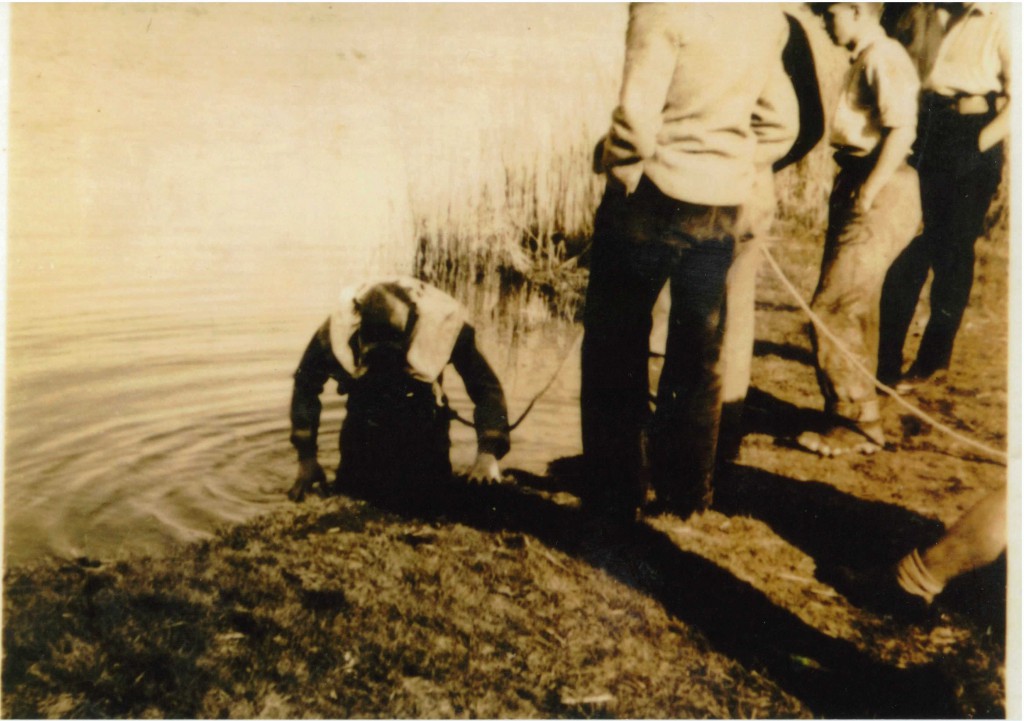 In those days you dived on the end of a rope. They had a fairly elaborate set of tugs for signals with continuous tugs meaning pull me out quick!
I’m not sure what happens if you need to do another signal while the shore cover are heaving on the end of the rope, supposing you got your foot stuck in a wreck on the way up. Presumably they would get whatever they could of the diver out of the water? It makes a nice free ascent on the end of a DSMB reel sound decidedly Sunday-afternoon-ish. 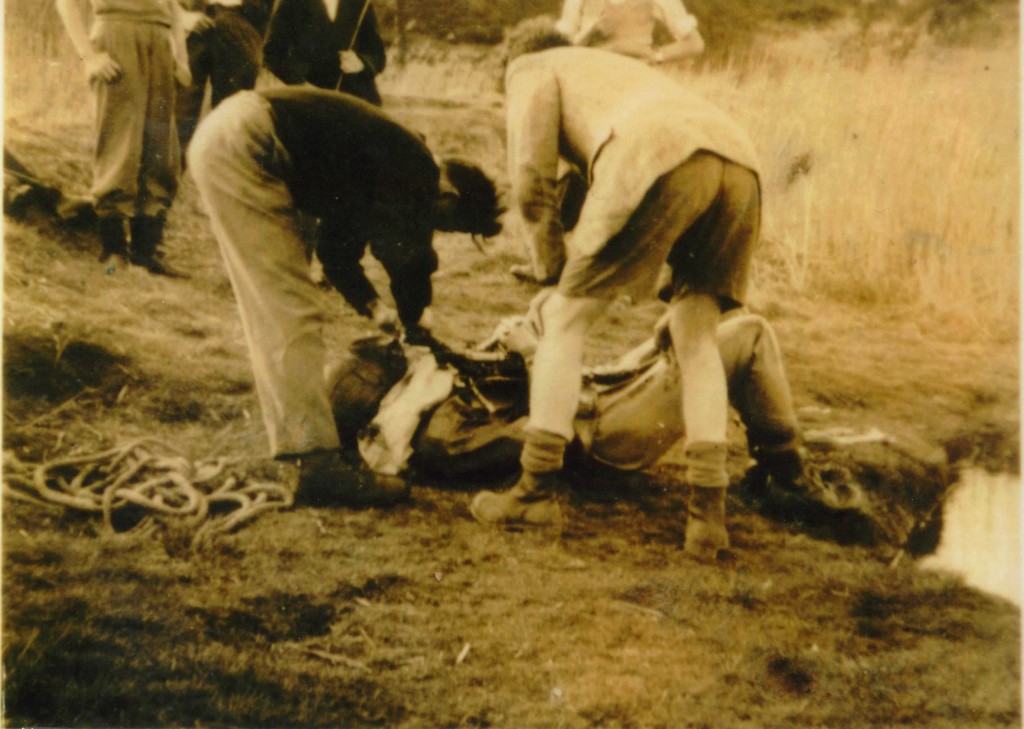 This is apparently a picture of a diver being dragged out on the rope. Presumably he survived the ordeal, but he certainly looks all-in and in need of long rest!