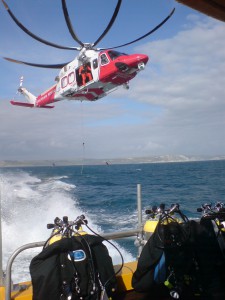 7th September, 2008 : On a recent Portland trip both myself and Terry were treated to a look at the new Helicopter based at Portland. The Aircraft is an Augusta Westland A139, and although smaller than the previous Aircraft it is quicker and has a much better endurance.

There was a lot of controversy when the old Helicopter was withdrawn from service, however pressure was brought, not just from divers, but from the local community to have the Aircraft replaced.

We were ‘buzzed’ by the Helicopter on our way back in to Weymouth as we passed outside of Portland Harbour. The rumour is that with the better search optics on the on board camera, the crew look for dive boats with good tea making facilities and large bags of scallops, some of which are apparently ‘scrounged’.

As the Helicopter approached the rear of the boat, a large card with ’73’ was displayed at the door by the winchman’ to indicate to the skipper to listen to channel 73 on the boats marine radio. 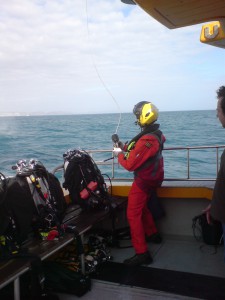 The Helicopter crew were new to the type and were spending all their available time in practising dropping off and picking up from various boats around Portland. This particular Helicopter has an articulated arm that can extend the winch out from the body, this is visible in the first photo.

The Helicopter did come in very, very close, and the noise and downdraft were incredible – If you are ever in a situation where you have a Helicopter above you like this make sure that everything loose is secured, even twin sets! and forget using the radio with the noise, also never touch the cable dangling below the winchman, it’s there to disperse static.

The approach was interesting as the pilot kept the Aircraft at an oblique angle to the boat so that he could see his winchman, the boat, and the way in front. The boat will speed up at this point as it makes control easier for the pilot.

The winch man had a cup of tea while the helicopter ‘bothered’ somebody else, a quick chat with the Skipper, and was then winched back up. 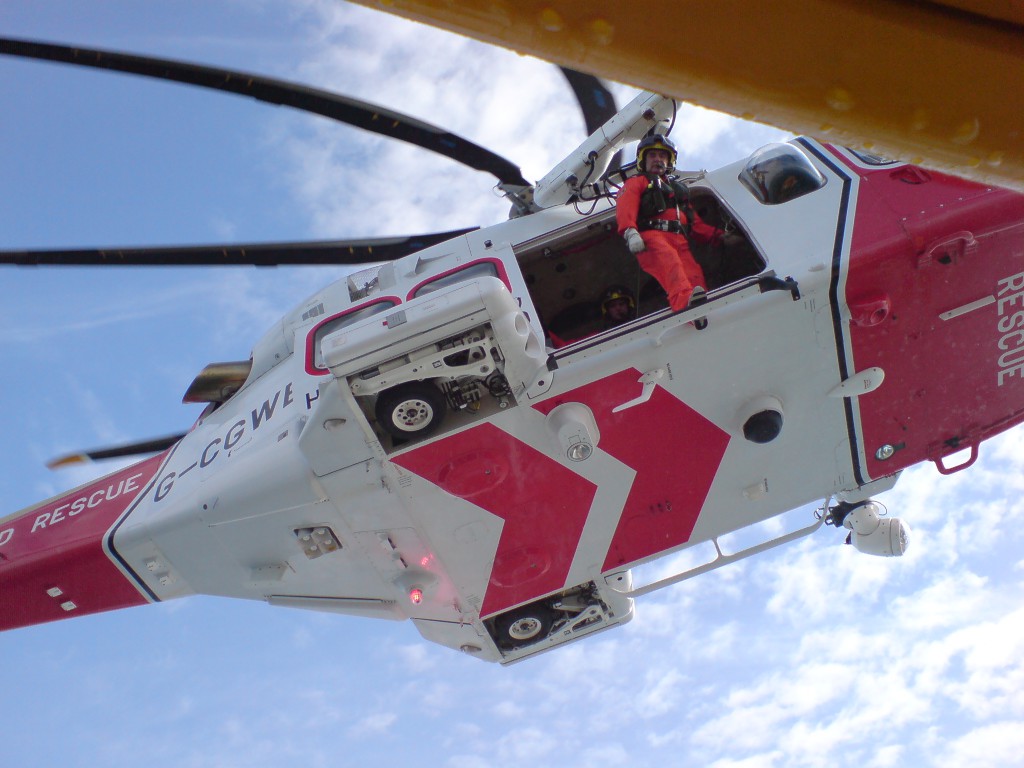 I have seen this happen on the MV Oldenburg on route to Lundy, and have some pictures of that, including the winchmann holding a cardboard box of tea, coffee and doughnuts.