5th – 10th August, 2007 : Scapa Flow is one of those places that has for far too long been on my ‘must do’ wish list and now, thanks to Mike, I’ve been there, seen it, done it, got the tee shirt (well actually it’s a rugby shirt).

It had all the hallmarks and lived up to and in many ways exceeded the expectations of a Mike Expedition. The diving was, well… words don’t do it justice. The company and camaraderie was of course excellent as always.

While the divers in the party were busy doing their thing the non-divers had an excellent time too; visiting many of the attractions the Orkney Islands have to offer and trying to keep up with Frank! It was great to see Dave Winter again who came down from his new home in the Shetlands to do a few dives and sink a few beers with us. 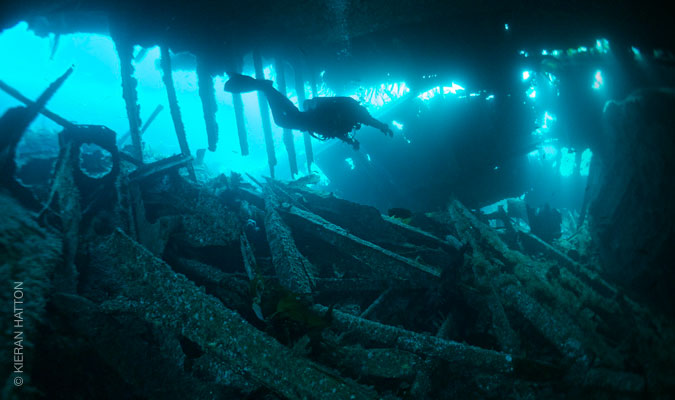 My proudest and most satisfying moment of the whole trip has to be the occasion of our very last dive. This was to be the block ship “Tabarka” : what a cracking dive! I’ve had worse vis. in the Red Sea. To get a flavour of what it was like take a look at the video someone has kindly put up on youtube http://www.youtube.com/watch?v=f2Rd_stXFNs. Unfortunately it doesn’t feature the 3 huge boilers and the engine.

In spite of it being a relatively shallow dive (15m), having to do a negative (no buoyancy) entry into a raging current just to get on it, meant for some it was a very advanced dive. The skipper had warned us that previous parties he had put on it had not listened to his precise instructions and had been swept off it. Some were picked up immediately and didn’t dive, some missed it and unknowingly dived on an adjacent wreck, some were even swept so far they ended up on a nearby beach!

We were told in no uncertain terms, from the time our heads left the surface to the time they popped up again would be 30 minutes and no more! Like paratroopers jumping from a Hercules our 12 divers were deployed in close succession and immediately descended as instructed.

Half an hour later precisely, as my buddies and my head broke the surface, I counted 5 other buddy pairs. None had been swept off it and all had followed the plan to the letter. What a team!

I can’t thank you enough for that one Mike 🙂

Note: The following site is well worth a look to get a flavour of what else Scapa has to offer (and lots more pictures!)