Our group joined those already waiting at the ferry terminal (a total of 8) & a tardy but uneventful crossing allowed Tim to educate us on how the windmills were nuclear powered before we were delivered to the Isle of Man. 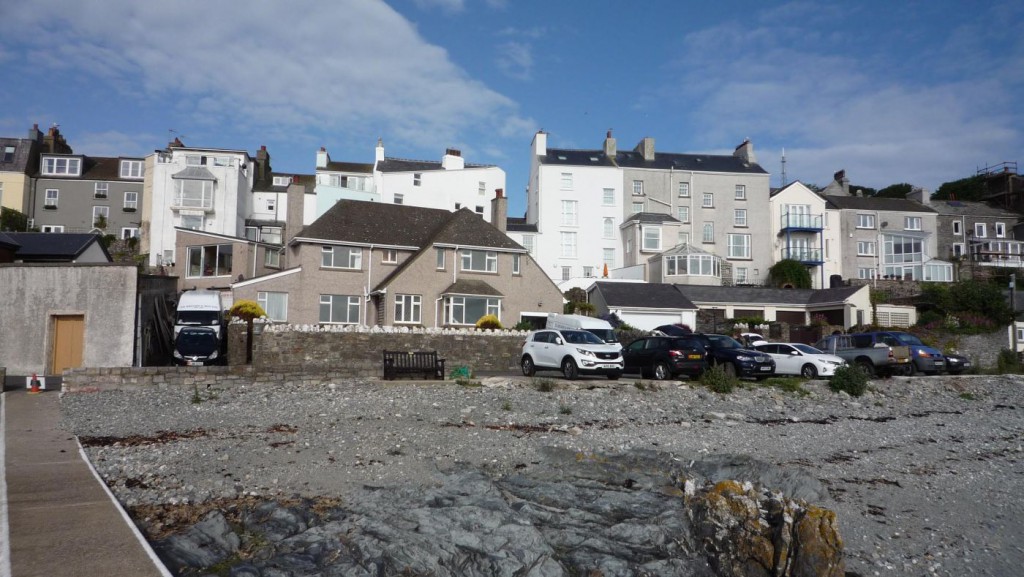 From Port St. Mary, a small village (pop:~2000) in the south of the island is where we unloaded into the Dive centre; facing the harbour with ample organised storage for diving kit before heading for the house (space for 12 & a great living room for debriefs!) . A walk into Port Erin (on the north shore-nothing is very fair from anywhere on an island this size!) & along the front with a pint of Rustys at the Bay View hotel finished things off nicely Picking up rolls (Sausage & bread – deliberately misunderstanding the request for toilet rolls!) wound Laurence up nicely while Mary’s tasty chicken casserole followed by a Guinness sealed the night. 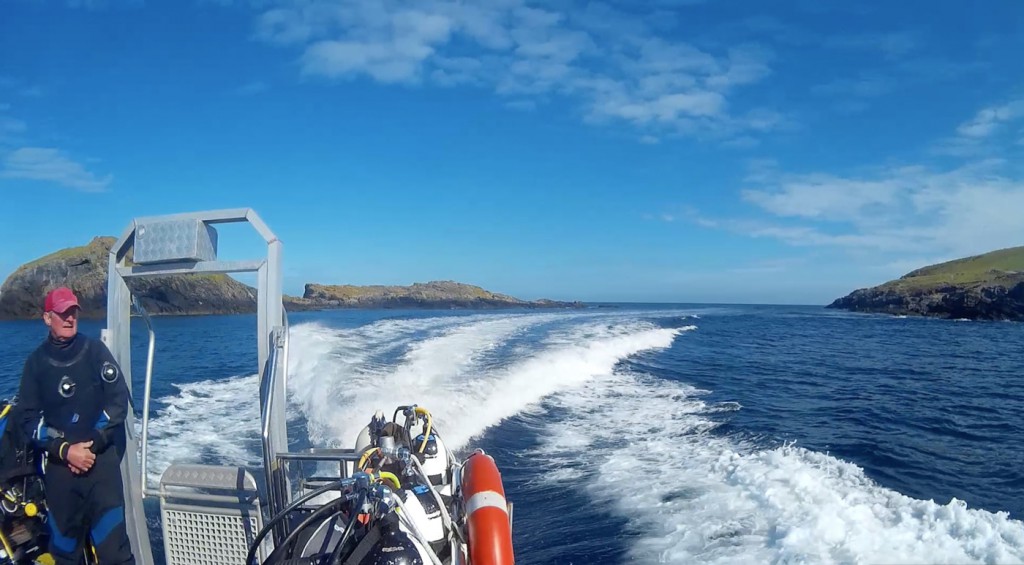 Between the Isle & the Calf

Up at 7 Laurence’s’ trusty blue van took us to the Dive Centre where our party achieved completion: 11 of us!. Strong south westerly’s meant we needed to launch from Port Erin so back in the van & off we went. The RNLI station on the harbour was missing its’ NIPL sign (ask Tim) but parking right by the steps couldn’t have been easier or more convenient (though the closed up Centre for Marine Interpretation was a bit sad & hinted at busier times)

Mikes boat,  the 12 metre Kirree Varrey (Storm Petrel in Manx) pulled up & we kitted up & boarded – dive gear neatly stowed in boxes with cylinders & BCs  bungeed to the railings – very neat!. The first dive was Bay Fine Pinnacle;  two waves to allow space for kitting up worked well & an enjoyable 50 minutes of this pinnacle just 5m below the surface covered in different coloured plumose anemones, edible crabs (don’t tell them !), lobsters, friendly wrasse & an angler fish palling it up with a starfish saw us straight. A sandwich break then past beautiful scenic cliffs to the Citrine as the weather improved. The Citrine dates from 1931 & although well broken, up the engine, props, anchor chain & impressive cut-away boilers are very visible. It was rough getting out & I’m afraid I had to feed the fishes! On returning a group split off for a walk & returned with much appreciated fish & chips which we tucked into under sunny blue skies (truly an isle of contrasts) while Tim regaled us with a variety of jokes & we wondered what the bad weather scheduled for Sunday might bring. 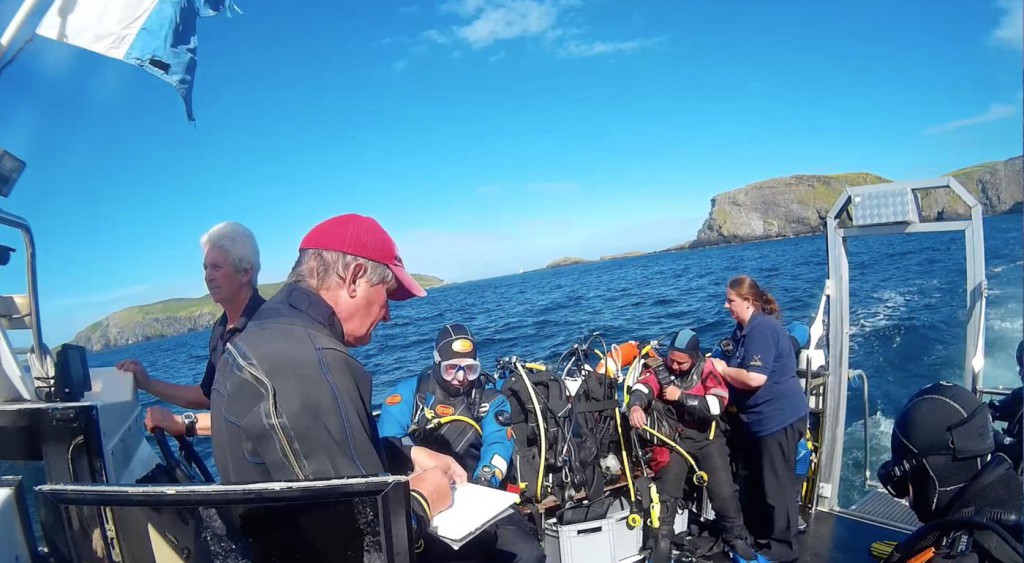 Saturday dawned clear so anticipating Sunday we planned 3 dives & the skipper was agreeable. Lunches & dry-suits collected we headed out to Craghee Jaghee with its’ nooks & crannies under huge boulders to poke around in & surprise the lobsters & crabs along; Back to Port Erin for lunch & then off to the Burroo, a rock that looks like a dragon drinking on the southern tip of the Calf of Man, a truly stunning diveof cliffs and gulley’s covered in a profusion of life and activity – all agreed this beat most other places they’d been in the UK hands down.

On our return Sue found she’d lost her car keys but the police advised her they had been found & taken to Douglas – crime & crime stopping shuts up shop early on a Saturday in port Erin! While they were being retrieved the skipper returned having dropped some overnighters onto the Calf & we set of now as a 6 for the 3rd dive – slightly concerned we’d miss our meal booked for later in the evening. This was the Outer Bows, a landscape of jumbled rocks forming hiding places for crabs, lobster and conger eels, while dogfish, wrasse & jellyfish swam amongst us

A filling Dinner at the Station hotel finished with Magnums bought from the co-op for desert, Chris L. offered the surplus to a couple of girls but they’d obviously been warned about strange men & sweets & refused. Back to a debrief write up logs & then to bed

Sunday was our ‘day of leisue on the Isle of Man, due to the predicted bad weather we had a lazy start with a huge brunch: eggs, sausage, bacon, black pudding, beans & bread cooked by Chris squared 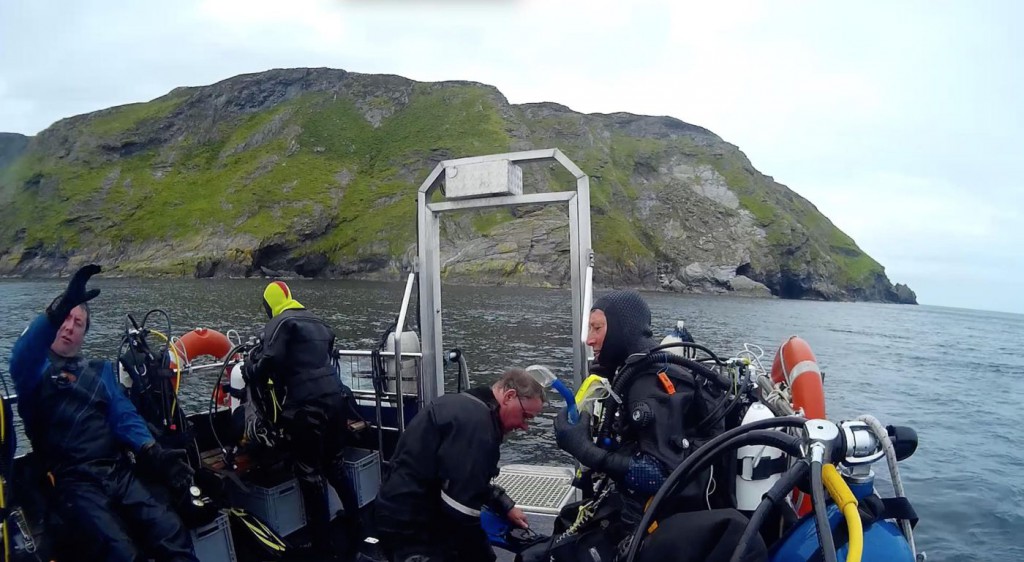 To the Dive Centre for 1 & due to the wind (SW & gusting) we went to Outer Bows again (5 of the party hadn’t dived it yesterday)  Everyone seemed to have a great dive though Lawrence & Mary couldn’t find the reef but saw an octopus but, Laurence’s luck – no camera! My dive with Sue was  aborted as I was breathing water & air in my reg. The boat checked my air was on (it was) but at 1m it was still water & air & I called it. Sue resurfaced following her DSMB. This gave us an insight into the secret world of the dive boat while divers are down – sun beds out & party music on! Our group returned indicating they’d had a great time – lots more congers etc. some strong currents & plenty to see. Ashore Tim’s experienced finger sorted my regs distorted diaphragm. Geoff & Jan’s chilli & reminiscing ofaquatic encounters in other parts of the world finished the day off nicely

First dive: out of Port St. Mary: Amulty – plenty of playful seals (my first !) nibbling fins, cameras & masks. along with plenty of other wildlife and my deepest dive! Tim found a torch (he found a mask on an earlier dive) and it still worked!

Second dive: Garden Rock  – plenty of seals here & lots of jumbled square shaped rocks looking like some major structure had collapsed in the distant past. My first octopus (dead unfortunatel) and lots ofkelp

Third dive: 8 of us for the Clan McMaster: a coaster fetched up against a rock in the sound between the Isle & the Calf: there’s a kelp covered wall & at the bottom plenty of wreckage to rummage in, I found a giant crab, Chris spotted its followers lined up in a row. & Tim took one for the ride of its life as  we passed the edge of the wall into a 3-4 knot drift. An interesting ascent through swirling bubbles going down as well as up ! as were we (& the DSMB at times). Pickup was well spaced apart & pretty rough. Chris L. noticed a buoy wrapped around a prop & went back in to clear it. I lost my DSMB (not clipped – lessons learned) but Jan returned with it! – who’d have thought it! Tim also got a treasure finders badge with his 3rd find ofthe trip: a weight pocket.

In summary a great trip to a very beautiful unspoilt, quiet land – even in late June!  Though the wind didn’t really play ball our skipper managed to find us a fine selection of dives while our party adequately sorted the logistics of feeding & ferrying. A huge thanks to Geoff for organising it, Mike, Tom & Sarah for skippering & putting up with us, the drivers & the chefs & everyone for getting along. Where to next?