My first visit to the BRETAGNE was during 1966 as a snorkel cover! [When you had to provide surface cover for the divers below.] This was the day Graham Llewellyn and Ray Lewis [club D.O.] found the bell. The boat was shared with Bristol No3 branch and some of them were a little put out as a crab had been caught under the winch where the bell was lying!

My first proper dive was with Graham in 1967, all I remember was arriving on deck, we exchanged OKs and as Graham swam off he kicked off my mask! I quickly cleared it and followed him, watching his fins for the rest of the dive, it must have been a good one as we swam from the gun to the bows and down to the seabed, all I remember seeing was G D L painted on his fins. 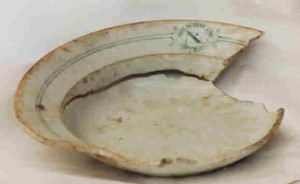 The visibility has never been very good on my many dives on the wreck, but poor visibility makes you look harder at what you can see, and this often helps you find those little items of interest. On one occasion, I found a portion of a dinner plate with no rim. Then a few months later when we had one of our regular displays of finds, I saw that Ray Lewis had a piece of a rim of a plate, out of interest I tried them together and they fitted perfectly! When Ray left the Club to live in the USA he gave me his rim to match my plate. 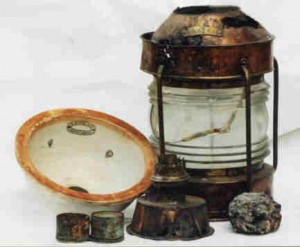 A few years after we had blown and lifted the gun, I decided I would try to locate the Lantern locker. On one dive I sank down onto the silt in the bows and I could see the rod that links the top and bottom of a lantern lying on the silt. I pulled it and it came off in my hand! I thrust my arms down either side of the lantern, held hands and stood up, I came up with the ANKER light, and boy did the visibility drop then!

Sheila Fennel happened to swim above me on deck and found the wash hand basin I had left there. Just as she went to pick it up, she said a lantern appeared up through the deck, followed by a selection of Porthole glasses. She then realised who was under the deck! 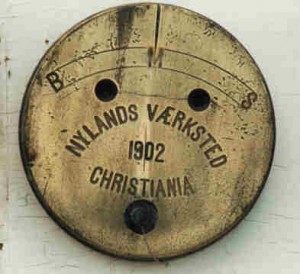 Lying on the starboard side, just forward of the superstructure I found the cargo winch from which I removed the indicator with the makers name on it.

In the early days of the club, diving the BRETAGNE it was a fine sight, upright, intact. There were lots of interesting things to find and explore. As the Owners of the wreck, we had no qualms about raising anything we found. I have even got receipts for portholes from the club.

On my recent dive this year (2000) the changes in the wreck seem to be accelerating.

The whole fore deck from the Bridge to the Focstle has collapsed onto the cargo below, including the hatch rims.

Both telephone boxes are leaning in at 45 degrees and it is very worrying if you swim below them.

When you swim towards the stern you now go below the decks either side of the superstructure, but you do get a better view of the 3 cylinders of the engine!

The starboard rear corner of the superstructure has collapsed, bringing the roof down to 18ins from the deck. The side bulkhead has a massive bulge where the roof pushed it out.

The stern is pretty well intact with a large dark hold to drop down into, the spare propeller is still in place and the Clipper stern lines are still to be admired, although I did notice the starboard stern bollards have dropped down through the deck.

The fish life can be spectacular, often while swimming along the port side if you look out to sea there is a wall of fish just hovering outside the rail. There are also plenty of large Pouting inside the superstructure

Despite the disrepair she has fallen into, the BRETAGNE and I go back a long way. I shall try to keep my name at the top of the dive list when the next chance to visit her again comes around! Even if it means I have to organise it!

This video (care of Teign Diving Centre) shows her in 2014