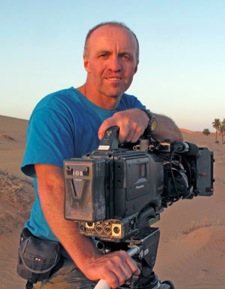 16th October, 2013 starting at 19:30 in the Chemistry Theatre, University of Bristol

Synopsis: Starting from a position of self confessed naivety Gavin has spent the last 5 years developing a unique underwater filming robot. From deep in Africa’s Lake Malawi to the frozen waters of the Arctic Ocean the system has developed from an idea into a state-of-the-art filming tool and along the way helped scientists discover at least 2 new species of deep water corals. Whether it’s sharks in the Red Sea, fluorescing corals in Fiji or diving in toxic waste in China, Gavin’s underwater work through the last year has taken him literally to the ends of the earth, reaching the North Pole earlier this year to place a time capsule on the sea bed 4500m beneath the Pole.

Gavin’s film project  ‘To Save The Whale’, followed Greenpeace crews in their battle to defend Whales  in the Southern Ocean and won the top prize in the Edinburgh Documentary Film Festival. His latest project ‘The Chamber’ returns to his first love of caves and tells the story of the discovery of the worlds largest cave chamber in the rain forests of Borneo. It is a film that would never have happened without the help of London Zoo and a hypnotherapist…

Profile: Gavin is a cameraman and photographer working extensively with the BBC, Discovery and National Geographic. He specializes in environmental and adventure subjects, particularly underwater, underground and other ‘hostile’ environments. As well as working with conventional filming equipment Gavin has also designed and built many specialist  camera systems  including underwater and airborne robotic systems.

Gavin was awarded an Emmy for his filming work on the BBC series Wild China and his own documentary projects have won numerous film festival awards.