16th October, 2004: The Kyarra is a 126m passenger & cargo liner that was sunk by a U boat towards the end of the Great War. In the early morning of May 26th 1918 the Kyarra was torpedoed port side mid-ships by UB-57, killing six crew. The remainder escaped to the lifeboats, and seven minutes later the Kyarra dived to the bottom.

The Kyarra has become a favourite with divers due to its close proximity to Swanage and the lure of prospective treasure. The Kyarra was laden with a mix of general cargo and amongst other things, gold pocket watches, bottles of champagne, red wine, perfume, and divers gold (BRASS) – don’t ask me what the fascination with Brass is all about. Probably got dropped from the diving syllabus in the mid eighties when we started to appreciate things like wreck protection and preservation, when lump hammers and chisels were no longer ’standard kit’. Long before my time, honestly.

Well, our club has not been dealt the best of luck with diving the Kyarra in recent times. I have lost count of the number of trips to Swanage by various members that have been cancelled due to the weather conspiring against us. Not this time. With reports of 10m plus visibility and a windless week the signs were looking good. Despite moderate winds on the day and spring tides, the sun was shining and though not 10m, visibility was easily 6-8m at depth. 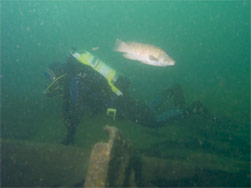 The boat neared the site when the skipper announced slack had come early, apparently a common occurrence for the Kyarra. A whole 40 minutes early! The Kyarra has two buoys; one attached port side mid-ships and one near the bow. Each buoy has a smaller tide buoy attached. If you are planning a longer dive the advice is to jump in just before slack water when the smaller buoy is showing, and pull yourself down the line. The current should be diveable at depth, just going slack. Slack water arrives when the main buoy also surfaces. When we jumped in both buoys were already showing, and despite the spring tides we floated down the line with ease arriving on the port side keel near the bow.

At this point, we made a serious error and turned right with the slight current still running and followed the port side of the hull right the way along the ship between the seabed and the keel. The hull is pretty, but the deadmens fingers are much smaller than the usual fare, leaving the hull relatively bare for a ship of this age, probably a symptom of the ferocity of the current that runs here. Apart from the seabed, sparse marine growth on the hull, the odd shoal of fish and the torpedo damage there is nothing much to see. As the wreck lies on its starboard side, anyone who has seen the diagram will realise all the deck fittings, boilers, and holds of treasure lie on the starboard side. If only we had swum up and over the wreck at the start, what might we have seen? Never mind, there has to be a next time now. 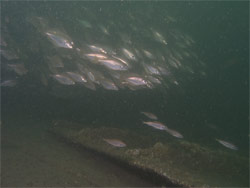 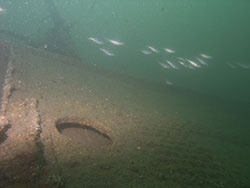 As we moved down the ship, the scale and one time grandeur of this vessel became apparent. Shoals of Poor Cod circled around the wreckage above the Hull plates and huge Pollack were to be seen out in the current.
Looking up the port side towards the railings, portholes were visible (well porthole holes). Sadly the brass coveting wreckies had taken the actual portholes. Shoals of poor cod circled the boat derricks above set against the intimate green glow the ambient light takes on at this depth. 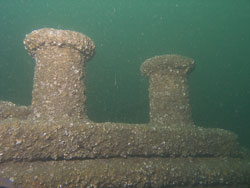 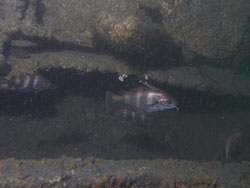 Approaching the stern, around an area of hull damage we moved up toward deck level where a huge pair of bollards were sighted. These massive encrusted lumps of steel dwarf the deck fittings of a typical steam ship such as the Bretagne.

In amongst the wreckage here, Terry found broken pieces of china and I sighted small Bib sheltering amongst the tangled mess of plates.

Time was pressing on, and despite using nitrox to extend our bottom time, we were working to a maximum bottom time of 45 minutes and time was running short. 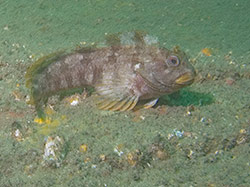 As we moved toward the end of the wreck, broken just aft of the crankshafts. I spotted a small fish resting on some broken plates. It looked familiar but I didn’t recognise it at the time. Studying the photos afterwards, it was a Tompot Blenny.

So I wasn’t narked, but quite surprised as I’d only seen them in shallow water and according to my fish ID book they’re not typically found below 12m. This one was at 30m. Cameras don’t get narcosis – another good reason to become an underwater photographer! 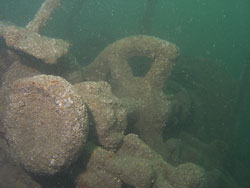 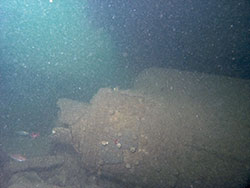 As we passed over the rear of the wreck to the starboard side the current was now starting to pick up. I stopped to snap a picture of a giant encrusted winch on the starboard side whilst Terry was drawn to some tempting overhanging plates near the prop shaft.

Anyone who dives with me will know my unwavering compulsion to stick my head into dark holes, so on with the main torch (not the camera spotting light), and in we go. Now where was that DARK hole? Not being an avid mechanical engineer I didn’t recognise most of the jumble under there. A few nice camera shots presented themselves of fish shoaling around with a window of green light signalling a distant exit, but I reduced myself to my usual speciality of fish tail portraits. As I turned to exit I did recognise the port engine crankshaft. I was so proud I knew what it was; it deserved a picture. 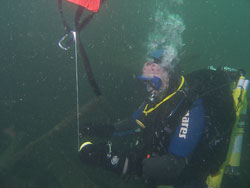 Then after two years waiting to get here, it was time to go. Terry popped up the EZ-DSMB (posh DSMB with a gas bottle – definitely one for the wish list!) and we ascended into the current with a note-to-self to return and dive the starboard side next time!

After a few minutes decompression we broke the surface close to the boat, and with negligible surface current finned back to the boat as others were boarding. Back on board the skipper served up hot drinks and despite being behind time for his next shuttle still took us back the scenic route taking us close inshore to the cliffs of Purbeck.

We dived the Kyarra on ’Mary Jo’ from Swanage Pier, skippered by Martin Jones of Swanage Boat Charters. Martin is a friendly experienced skipper not afraid to share his knowledge of local sites and the mysterious tides around the ledges at Swanage. He’s also very honest about the local weather conditions, offering a full refund without question, as we know well after trying to charter his other boat ’Sidewinder’ last year.

Thanks to Simon Green for organising the club trip this time around, and to Terry Hall for putting up with my camera flash, and buddying