A fun-time story by Harry Ryalls.

Over the coming weeks, we are going to be playing with two different types of rebreathers courtesy of Current State Diving and Richard Bull. Wednesday 20th March 2002 was to be our first experience and also a bit of a sort out night for the coming weeks. Sadly if things were going to go wrong, I would be one of the one’s to suffer and not those coming after us. To make it easier, we limited the number of people to a maximum of six per evening and myself, Julie ‘The Wife’, Cyril Hucker, Bob Abbott, Stewart Butterfield and Mike Down were lucky enough to get ‘First Go’. 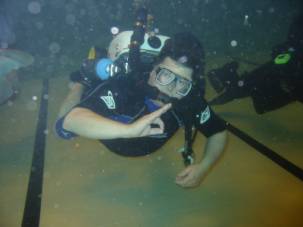 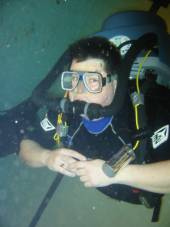 Here I am having a play – a break from all the training I am normally doing.

Richard Bull met us all earlier for a 45-minute lecture on the operation and safety aspects of the units that we were going to be using that night. He showed us the Draeger Semi-closed unit and explained how it operated; this unit is very simple in design as there is no electronics to take underwater as in a closed circuit unit.

The Draeger rebreather has an oxygen bottle (Nitrox was to be used for our pool work tonight) that gives a constant flow to the unit, the user breathes in the air supply and uses the oxygen for metabolism, the amount being used dependent on the activity being carried out. Excess oxygen within the air being breathed out on exhale, scrubbers, within the unit, absorb the carbon dioxide from the exhaled air and the remaining is then re-circulated through the secondary lung back to the diver. Richard explain that with this secondary lung, our laws of physics that we use on a open circuit system have to be re-thinked, where we normal exhale to submerge using open circuit, we only recycle air to the secondary lung using rebreathers. So our thoughts on buoyancy have to be revisited, no more breathing in to rise out to fall now, our attitude now plays a major part in our position within the water table (pool depth). This was to cause us all a few problems in the pool and I think we were all affected in someway or other.

To understand how a rebreather functions, Richard explained that it is just a loop with one-way valves either side of the mouthpiece, (let’s call this the top) at the bottom is placed a container that is to holds our air supply.As we breathe, the amount of oxygen in this supply is slowly reduced, due to metabolic action taking place in the body. The amount of carbon dioxide, less that 1% in the original gas mixture when we initially started to breathe from the system, is slowly increasing as we exhale.

To stop the level of carbon dioxide reaching a dangerous level we need to add an absorbent to the system to scrub this gas from the mixture. Now so long as there is sufficient oxygen to meet our needs, all is well, but eventually this will also fall to a dangerous level, where we would lose consciousness, so we need some means of adding additional oxygen to the air within the circuit.

To do this we attach a high-pressure bottle to the secondary lung and allow air to enter the system at a fixed flow rate and to stop the pressure within the circuit reaching to high a level we add a blow-off valve set to a predetermined level. This now turns our simple closed circuit system into a semi-closed system

To turn this system back into a closed circuit, we now have to start adding electronics. A few oxygen sensors to the secondary lung to detect the level of O2 in the mixture, another valve to our high-pressure bottle, so that we can regulate when additional oxygen is added to the secondary lung and a couple of computers to do all the calculations and system controls that will be needed.

Suddenly our simple closed circuit system has turned into quite a complicated one that now has the potential to do some serious damage if it goes wrong or if it is not used correctly. Sadly this is borne out by the number of deaths that have happened since rebreathers were introduced.

Back to the fun…

Once Richard had explained all this to us and answered any questions we might have had, it was off to the pool to get wet. The pool plan was for one person at a time to try the Draeger Semi-Closed circuit, swimming from the shallow end of the pool to the deep end, where we could try barrel rolls, twists and turns, to see how the unit behaved, then back to the shallow end for the next person.  After everyone had had a turn with this unit, it was over to the closed circuit system and a repeat trip.

While someone was using this unit, others were allowed another turn with the Draeger system, ‘might as well, whilst there is some air left’ to use a quote was the excuse and there was no shortage of candidates. Even though there were only six of us, the time was quickly passing and all to soon it was time to get out and pack everything away. A very good first night, with lessons learnt and tips to be passed on to those coming over the next few weeks. I’m sure I echo the thoughts of the others in offering my thanks to Richard Bull and Richard Dolby, for all their help in making this a very enjoyable evening and one I hope to repeat in the near future

My thoughts on the whole event

The evening start badly with Richard getting lost on the way to the boat shed, I knew I should have dropped of the map as promised, but hoped he would find his way none the less. Happily after a quick phone call on the mobile and direction given, he arrived with not to much time lost. He introduced himself to the others along with Richard Dolby, who was going to help him out in the pool by supplying safety cover.

Richard B. then gave a talk, which I found interesting and easy to understand, on the operation and safety aspect of rebreathers. Using the Draeger Unit as a visual aid, he showed us all the components, as well as drawing the diagrams used in the Technical section, that make the unit function. He also explained how a simple mistake can lead to the death of the user if the strict safety guidelines are not followed when using either of the systems.

How if you forget to turn on your air supply, you do not notice any difference in the operation of the unit whilst you breathe, until the oxygen level falls too low and you fall into unconscious and die, then it’s to late to do anything about it. He explained that people get a bit blasé about their use, when first trained, they adhere strictly to the procedures, but some soon start to adopt bad habits and this is displayed in the number of deaths of divers using these system that are reported each year in the BSAC annual incident reports. The majority of these thought to be due to the simple explanation above. The only thing he wanted us to pay particular attention to was the open/close valve on the mouthpiece. If any water was allowed to enter the breathing tube, it would flood the carbon dioxide scrubber and fill the secondary lung. This would then need a lengthy strip down and clean, spoiling our evenings entertainment. The rest of the equipment would be set up by himself and Richard Dolby. Then it was of to the pool where we were to give a hand in getting all the equipment to the poolside. 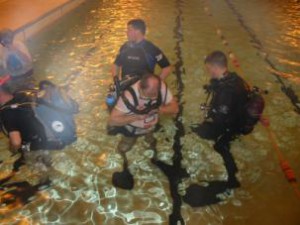 Mike down has the UMI BMR700 Closed Circuit Rebreather 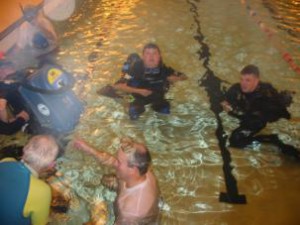 Here we are Kitting up in the shallow end of the pool.

When I picked up the UMI BMR700 Closed Circuit system, I was amazed how heavy it was and could only manage it by carrying it on my back. Out of the water it must weigh in at a staggering 35–45Kg, but I was to find it positively buoyant in the water.  Once everything was at the water’s edge it was time to kit-up and have a play.  I volunteered to be the last one on the Draeger system, so as to allow me to be the photographer for the evenings festivities.  It was decided that the order would be as such: – Mike Down, Bob Abbott, Julie ‘The Wife‘, Stewart Butterfield, Cyril Hucker, then myself, once everyone had had a turn, we would change to the other system.

When my turn came, I was a little apprehensive, but very excited as well. I kitted up, turned the mouthpiece on, checked that the air supply was also turned on, then it was time to get wet. I gingerly dropped below the water and attempted to take a breath, low and behold everything worked and I was off. A slow swim to the deep end and I tried to drop to the bottom, as I normally would, by breathing out, nothing happened; the second lung was keeping me static within the water table; what did Richard B say about descending?; I changed my attitude and slowly finned down, great!  Now was the time to play, I tried barrel rolls, up and over and turning onto my back, Shock! Horror! I felt my face blowing up like a Michelin Man, as the secondary lung emptied and tried to fill my lungs with the total volume within the system – that’s what it felt like anyway and I found it very difficult to breathe normally.  Back over to my front and everything returned to normal, a quick OK to my safety cover and it was back to the shallows. 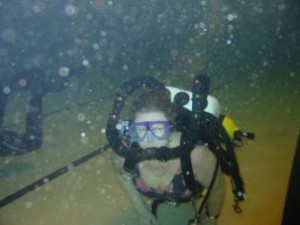 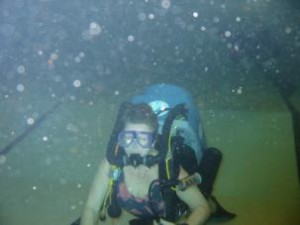 Some pictures of Julie ‘The Wife’ having a play

Sorry about the water clarity, but you would not believe what we see in the pool.

Once back in the shallows I had to wait for my turn on the other system, but this again allowed me more time to play as David Bailey. When my turn came I could not believe that the 75 minutes we had was nearly gone and only 10 minutes remained. A quick change over and off I went. I repeated the same drill as before, but this time had the added problem of being held up by the systems positive buoyancy. This was not a major problem until I tried loop-the-loop and I found my cheeks hurting with the sudden rush of air as I ascended towards the surface, oops, back over and fin to the bottom, that enough I thought, back to the shallows to find my time was at an end anyway. A quick shower, then hump all the kit back out and a great thanks to both Richards for making this an very enjoyable experience. Hopefully I will be able to repeat this in the coming weeks, I’m sure someone will drop out for one reason or another (I hope anyway). 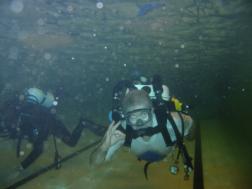 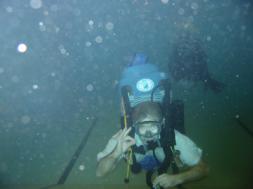 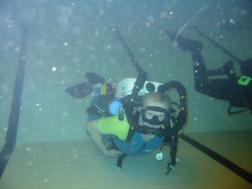 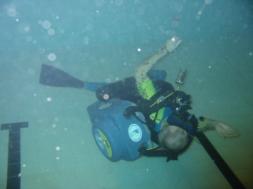 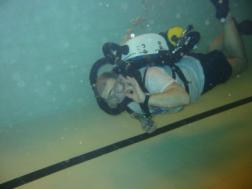 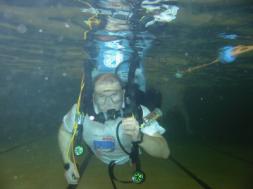 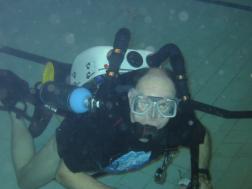 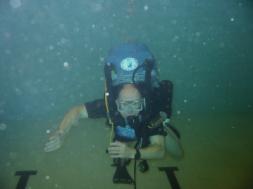