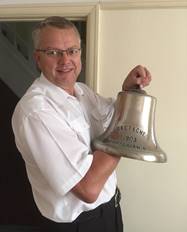 This article could have been headed “You really should have been there” because what happened last night at the club will never, and can never, happen again.

Steve and I were sat in the bar, John had just left, when a couple of people walked in and asked if we were anything to do with the diving club. Now at that point I was pretty sure that I recognised the man but it had been a very long time since I had seen him so I wasn’t completely sure. Anyway, he said that he had some old equipment in the boot of his car that he wondered if we would be interested in.

Intrigued, Steve and I went out to the car park with them and as we walked out, I said that I thought I recognised his face and asked if we had met before. He said no, that he wasn’t from around here and that he probably just had a face that looked like someone else.

Arriving at the car, which I noticed had a Spanish registration and made me think that my suspicions might be correct, he said “Have a look at this and see if you are interested”.

Opening the boot, both Steve and I were taken aback, both of us exclaiming “Wow” at the same time. Turning to the now grinning man I said “You’re Graham” at exactly the same time as he said “I’m Graham Llewelyn”.

I’m sure that I don’t have to remind any club member that Graham was one of the club members who recovered the bell from the wreck of the Bretagne back in 1966 and has been the proud owner since that time. He left the club many years ago and has lived in Spain for well over 20 years where the bell has hung proudly outside his door. He has now sold up and wanted to ensure that the bell was given a new home where hopefully it could be displayed to a wider audience.

Graham and his daughter joined us for a drink in the bar where we briefly caught up with his news and also that of the club and the whereabouts of a lot of the club members that he knew at the time. Thankfully, despite being a relative new boy to the club, I was able to remember a lot of the names and was able to update him on what has happed or where they were.

Sadly, it did make us both realise that the passage of time has marched on and a lot of these friends from the past are no longer with us.

Perhaps some of you, particularly our younger or newer members are thinking, why all the fuss about an old bell. You can buy them in lots of antique shops and nautical reclamation sites. However, you cannot buy this bell. This one comes from the clubs own wreck which was launched in 1903 and sunk on August 10th 1918. The bell and other artefacts were recovered in 1966 when Graham bought the wreck and now in 2016 it has gone full circle and has returned to its spiritual home.

There are not many clubs that own their own wreck and as someone who has a very strong sense of the clubs history, I am extremely pleased that the bell has finally come back where it can be seen by many more people.

Graham did say that he looks at the website so on behalf of the whole club I would like to extend to him our sincere thanks for donating the bell to the club and to say that you are most welcome to join us for a drink on our club night whenever you are back in the country. I wish that I had thought to have a photograph taken with him and the bell but I was caught a bit on the hop and didn’t think of it until today.

More news on the bells new home in the near future.

Further articles on the Bretagne are here