If you have never been to the Hallsands Hotel, South Devon before and you visit it for the first time, you may find that the initial vista that greets you strikes a De-ja-vous cord in the memory and you think you have either been here or seen it somewhere before.

When I first saw the hotel perched up on the hilltop of Hallsands, I was struck with the similarity of the view with the one made famous by the director Alfred Hitchcock in his film ‘Psycho’. The only thing missing from this scene was the character of Norman Bates standing at the front door to welcome you.

Today’s diver, when considering staying somewhere, is looking firstly for comfort and good food as well as a base of operation for their diving. This hotel is ideally suited to this type diver; it offers a modest accommodation, good facilities and plenty of hearty food for the hungry person. This is especially true for those that decide to stay overnight and enjoy the bed, breakfast and evening meal accommodation option. There is also the B&B option for those that may like to explore the variety of small seaside villages that dot the coastline of Start Bay.This is where the similarity with that film ends and reality starts. The current proprietor of this establishment is Carol Light, who greets all her guests with a warm smile and a friendly welcome, which carries on throughout your stay. She along with the rest of her staff, who look after the hotel go out of their way to make you feel at home.

From the pebble beach, which is situated adjacent to the car park, you are able to launch a small rib or medium size inflatable. There is a concrete ramp that at the moment nearly reaches the high water mark and if you ask Tony, who looks after the diving side of the operations at the hotel, he will give you a hand to launch and recover your boat(s). Once the boat is at the bottom of the ramp, there is then some equipment to help you get it to the water line.

Recovery, when required, is not as simple and requires a bit more man-power, but once launched you can moor the boat at one of the convenient buoys that are just offshore, especially convenient, if you are staying overnight. Alternately, if you own a large rib, you can launch from Dartmouth and motor across the bay to this site.

Another option is to use the dive operator at Dartmouth, who offers day trips to various sites and will pickup from Hallsands beach. 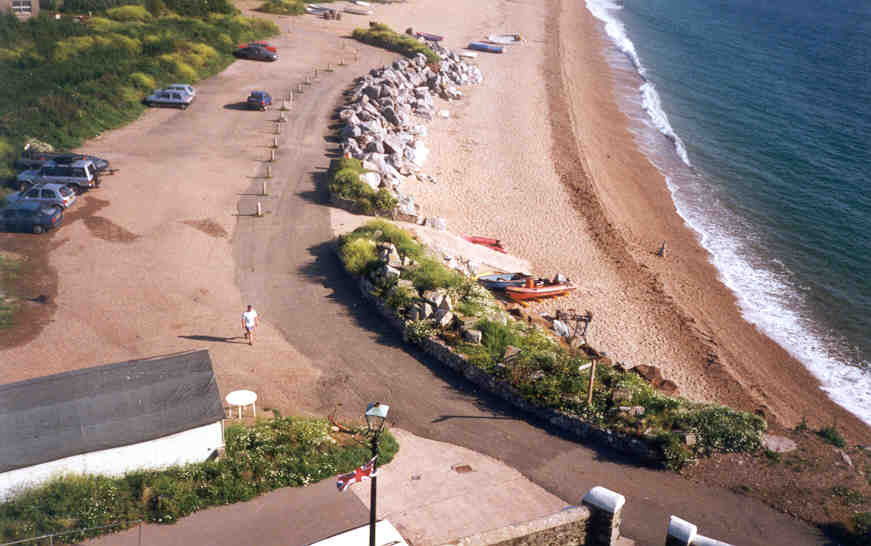 View of the Beach showing the launch ramp

Using Hallsands beach as a base you can visit a variety of different sites.

Easterly and not far away is Dartmouth and the various wrecks available from here, the Dutch tug, the Picton Castle, the Dancing Beggars and the Eastern Blackstone to mention but a few. Slightly nearer is Beesands, which offers a nice reef dive that stretches away from shore into deeper waters.

Westerly is Start Point and an exciting dive for the adventurous diver – that of the Skerries banks, which must be dived at the right conditions, as the water around here can turn into a bubbling cauldron very quickly. Around a bit further on past Start point itself, is the wreck of the Newholme, which again is for the experienced diver only.

For those that can travel further afield, Salcombe and her wreck site can easily be reached and the Maine is approximately 40 minute away.

The beauty of Hallsands is that even if the winds blow from the Southeast to Southwest, you can still find a dive site within a short drive. This opens sites from Hope cove to Brixham for those that desperately need to get wet on the outside and not the inside.

We recently revisited this site for a long weekend and took over the whole hotel, much to the annoyance of some of the other divers that turn up on spec. We took our club boats with us, which we launched on early on the Saturday morning and we planned to recover them on the Sunday evening, a deed that we were not looking forward to, all that heaving and pushing after what we hope to be a relaxing weekend. The weather was being fairly nice to us and we attempted to dive on the Newholme wreck on the Saturday morning. The trip was very exciting on the way to the wreck site as the tide had turned and the water was very active around Start point, but we managed to negotiate our way through this exciting part of the trip.

Although we had the GPS settings for this wreck, we had no Transit marks, so we spent a bit of time trying to locate it on the echo sounder, we finally thought we had found it and dropped a shot on to it. Our first pair of divers entered the water and descended, what looked like a vertical shot line, hanging in totally slack water. But as they approached the bottom they found the shot slowly ploughing a trail across the sand, it had missed the wreck and the slight current was taking it along in its pull. By the time this was discovered, the other pairs of divers had already entered and descended, so they used the shot as a marker buoy and had a short drift dive before ascending back to the surface. This dive was not totally wasted as bits of wreckage of winding gear and cables were found. It was decided as time was getting on, to return to the beach for lunch and another exciting return trip back was had. 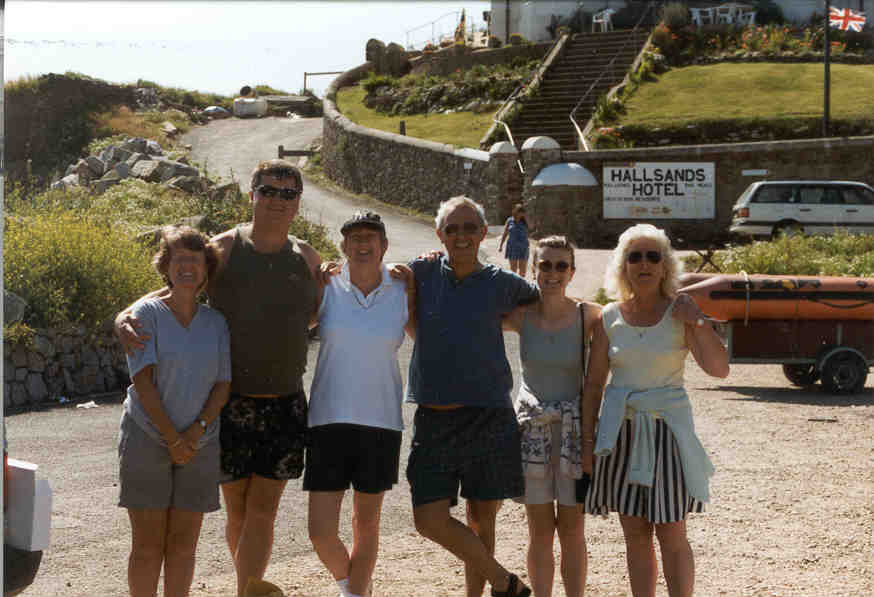 After lunch everyone wanted to dive and we loaded the boats up and headed of towards Beesands reef. When we arrived at the site we had a slight problem with one of the engines and decided to moor up this boat and use it as a dive platform, we used the other as surface cover as everyone was using SMB’s. All those that took part were very happy with the conditions on the bottom and all had something good to say about their dive.

Another reason that this weekend was booked was that it was my wife and daughters birthdays, Samantha’s was on Saturday and Julie’s (the wife) was on the Sunday. So Saturday night after dinner, we had a bit of a birthday party for them both where Carol presented them with a joint birthday cake of which everyone, that was able to, had a piece. There were some strange things happening that night, but the main point was everyone had a great time, I heard the next day that some went on partying until the early hours of Sunday morning. 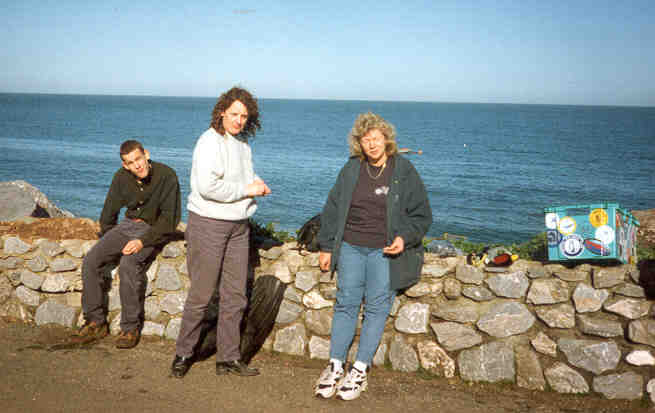 Joe, Carol & Julie (The Wife) sitting on the wall above the beach

The only down side was that later that morning, there were not a lot of takers for a dive. Luckily for them, the wind had changed and was now blowing directly onto shore, with plenty of white horses in evidence. Those of us that fancied a dive, decided to take a trip to Thurlestone Beach and to visit the Louis Shield wreck from the beach. This turned out to be a great dive with visibility in excess of 10 metres.

As it turned out Tim Clouter and Myself had two novices / Club Diver trainees each, so we decide to allow them to dive as buddy pairs, whilst we shepherded them to and from the wreck. This way they could get experience of diving together, as well as following our navigational directions to the wreck.

We decided to submerge close to shore and swim underwater to the wreck, so as to enjoy the bottom life on the way. We arrived at the wreck in about 12 minutes, where we stayed for roughly 20 minutes having a good delve around, before heading back to shore, again underwater. I took this opportunity to do a bit of air sharing with my two buddies so as to progress their training, they both did very well. I think that they were a bit amazed when we surfaced to find that we were nearly at the same position that we were at when we entered the water. We had a short swim parallel to shore to return to our entry point, much to the amazement of the other beach users, who had arrived whilst we were underwater. This dive rounded of a very enjoyable weekend and we had the task of getting our boats out of the water to look forward to.

The drive back to Hallsands took us longer than expected as we were stuck behind a First Bus that would not let us pass. We arrived back at Hallsands, where I had to swim out to the moored boats and bring them back to shore. Meanwhile the others had brought one of the trailers down the ramp, luckily I had planned to recover the boats at high tide and it was not far to the water. Another dive club was there and they had some rubber matting that we were allowed to use, which we hopped would make recovery that much easier. It did not quite turn out that way, but we did manage to recover all four of our club and members boats, as well as the other dive clubs boat in less than 30 minutes. All we had to do then was get our boats washed down and made ready for the road before everyone vanished on their way home, this we accomplished with the few that stayed to help.

A few of us were staying the Sunday night as well and we were looking forward to a nice meal and a relaxing evening, both of which were had. There was some excitement that same night, when a strange object was seen floating past the beach, Alan decided to recover this as it posed a shipping hazard. This task was not as easy as it first seemed, this object turned out to be cone shaped and made of stainless steel. It looked as though it had been on the seabed in at least 20 metres of seawater by the growth on it. Alan called the coast guard and reported the find, they said they would send the bomb disposal team out to have a look at it. I have since telephoned him, but they could not throw any light on what it was.

This was the end to a very enjoyable weekend and after another hearty breakfast on the Monday morning, we said our farewells to Carol and her staff and we and our remaining friends made our way home to Bristol and normality 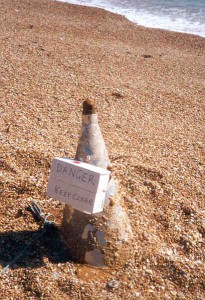 Do you have any idea what this might be?

This is what was recovered from offshore on the Sunday night. The  Coastguard and Bomb Disposal team could not throw any light on what  it could be.

It appears to be made of Stainless  Steel, is hollow, but airtight. The base  is angled and welded onto a steel plate. At the top it appears to have a  screwed insert that is ferrous and is corroded. It stands approx 4 feet high  and is about 24inch diameter at the base sloping up to the insert area at  about 3inch diameter. It appears to have been underwater for some time  as it is heavily covered in marine growth.