Was the trip going to be worth it? It’s a long way to this part of the world and the report of ‘El Nino’ doing all that damage to the reefs around this paradise could make this a very sad trip. There is always the sun, sand, and surrounding scenery to keep us occupied or so I thought until I saw the Island from the air, We have to live there for two weeks? What are we going to do after the first day, it looked so small! 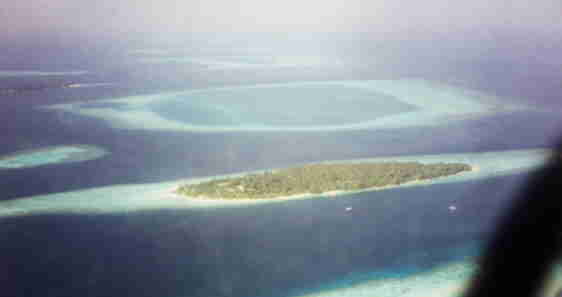 Let’s worry about tomorrow or the next day, when we have all recovered from the jet lag. Let’s just become couch potatoes for the rest of the day and have a drink or three to help us sleep that night. Sat with a small glass of ‘Tiger’ beer in my hand (the first one did not touch the sides and they do not do pints), I looked back on the whole trip here which was an experience.

Although we were a group of some fifteen persons, some of us had gone to London early on the Saturday and stayed in bed and breakfast not far from Gatwick. Going up by train had allowed us to start the holiday earlier than most and we carried on that evening with a good night at one of the local hostelries where we had a very good meal. Then it was back our rooms for a nightcap and a good nights kip before the long flight to Male. We woke the next morning to discover our plans of continuing where we had left of the night before were thwarted due to our hosts plans being changed, so it was to the airport that we headed and a look around the duty free shop, which I must say is the second best way that I like to spend my time — NOT–, but that how the cards were dealt. But we were here and this was where the group was to meet, so where’s the nearest bar? After a few hours it was time to meet up with the rest of our group, but we could not find them, thanks to mobile technology we all met up in the departure lounge and were soon on our way to the plane and the start of our adventure.

Our transport to ‘Male’ in the North Male Atoll of the Maldives was a Boeing 767 being operated by Air 2000, as we were a diving party, they had allowed us all an extra weight allowance of 10 kg each, which most of us were very thankful for, it’s amazing how much an extra pair of shorts and a couple of tee shirts weigh, not counting all the dive kit, cameras (both land and underwater variety) and such that we were taking.

After after seven hours, two meals, a couple of the latest blockbuster films and a few rounds from the drinks trolleys, we landed in Bahrain, Saudi Arabia for a short refueling stop and a quick look around that bastion of duty free shopping. To say that few of us brought anything here goes to show how prices have changed over time. Just over one hour later it was back on board for the final leg of our flight to Male.

Four and a half-hours, another meal, blockbuster film and even more rounds from the trolleys, we were on the final approach to paradise (or so I thought). Soon after we were rolling to the arrivals gate and the much enjoyed experience that us Brit’s are used to – queuing. We had to get through Customs and Immigration. Once through this, which felt like hours but could only have been fifty five minutes or so, as a couple of planes had just landed, it was the compulsory wait at baggage reclaims. Then a new one on me, we had to queue to have our baggage X-rayed before we left the airport and entered the country.

I know they are Muslims, but you can take things too far, you can not take any alcohol, any type of ‘dirty’ book (such as FHM, LOADED, MORE to mention just a few), drugs or anything they think is anti-social in to the country and this is their way of ensuring you do not. I hear that the penalties for not abiding by these rules are quite strict, if not down right shocking.

Once we had all cleared this, it was time to leave that pleasant climate of air conditioning and venture out into the real world and find our next form of transport to our final destination of ‘Vilamendhoo’ in the South Ari Atoll region. I bet you can not guess at what we found when we ventures out into that hostile climate, YES another queue, where we had to book in for a short seaplane flight. This turned out to be a bit of fun as although we had all booked as a party they wanted us all to book in separately, just in case some of us had not arrived. (What has happened to modern day communications – they could have just checked the flight listings to see we all had – easy what !!) But still we had to do it as they were in charge, so I stood in the queue until it was my turn and then started to call out the names of our party to get the tickets and pass them to the relevant couples.

So that’s it, we’re on our way to paradise at last, not quite, where’s the transport to the planes? We have to wait a bit longer, so we did, just outside in the glorious sunshine we were all expecting to find here. After about one hour a pickup truck arrived and our baggage is loaded. An air-conditioned coach then took us to the internal airport so that we could ‘check-in’ for our flight, what was that we had just done back at the main airport? – Oh we had just been given check-in tickets to hand to them. Well you have to keep the locals in jobs I suppose. Well we must surely be on our way soon – not likely, a few hours wait before they can take us to the island, there are only so many you can take on a seaplane flight. Well, we can all catch a few ‘ZZZ’ in the departure lounge, yes, but only when some of the others already there have gone. 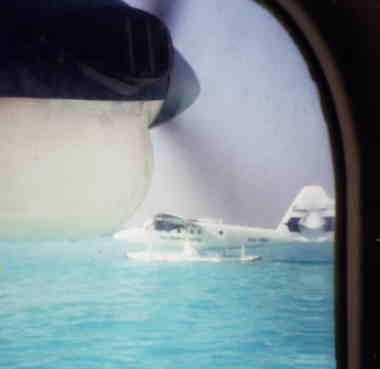 Finally we all found chairs and I was soon snoring and keeping the rest awake, well only for a short time before I received a kick in the shins, why should I sleep when the rest are awake anyway? What’s that? our flights being called and there’s the coach to take us to the plane – just joking – we arrive at flight departures where we will meet and board our Seaplane – at least we can look at the crystal clear water and some of the delights that await us when we finally get to our resort, there’s also the added attraction of watching the planes land and take off if you like that kind of thing. As I watch the planes, our party is slowly diminishing as they are ferried to the island, then we are being called and it’s our turn to board, I am lucky enough to get just behind the pilots and can watch as preparations are made for take-off, but am still amazed at the amount of noise when the props are run up to take-off speed and we are soon skimming over the water and on the final leg of our journey to the island. 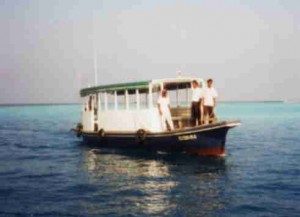 This is a fun flight and we can look down on all the other islands and see through the water at the reef’s that surround each in turn. We see the main island of Male, it is totally covered in buildings, houses, shops and the like, it looks very funny perched in the middle of all that water. Twenty five minutes later our pilot slowly banks and we see our holiday island for the first time – it looks very small and I can only see green trees, where are all the chalets, (sorry Tony – Villa’s or was it Condo’s, Semi detached of course). We do a few turns around the Island before the pilot lines us up for landing and we slowly descend towards the water where we hardly make a bump before spray is being thrown into the air as the floats make contact, we are down and making for a large floating platform to disembark. We have finally arrived, after approximately some eighteen hours of traveling and waiting, we are here and our final transport was chugging towards us over the clear blue waters of the Maldives, five minutes later we are stepping on to the island and into the start of our adventure.