[Tim] Though some of our more hardy club members dive all year round the club RHIBs tend to be put into hibernation through the harshest winter months and the Easter weekend is typically when our RHIB diving season commences. However, preparation for the Easter expedition starts many weeks before with boat working parties checking over and servicing the boats, trailers and associated equipment.

So it was that my car, loaded with diving and camping kit was towing our Humber Assault southwards down the busy M5 to Plymouth. My reward on arrival at the camp site was a cold beer and a delicious fish and chip supper from the local chippy. Some of our dive party opted to camp while others either came for just one day or took up residence in the Mount Batten Centre from where our diving was to be based.

HMS Scylla (F71) – a Royal Navy Leander-class frigate, built at Devonport Royal Dockyard and after being decommissioned was scuppered (intentionally sunk) as an artificial reef on 27th March, 2004.

I had the good fortune to dive her 2 weeks after she was sunk. While it was both amazing and unusual to dive a completely intact wreck in prime condition she was rather sterile having at that time not a lot of fish life but already a slimy layer of algae covered most surfaces. To see her now some 13 years later it is amazing just how established and mature a wreck she has become. By 2013 there were about 250 species recorded! It is always great to dive the Scylla and with the excellent weather and visibility this occasion was a real pleasure. 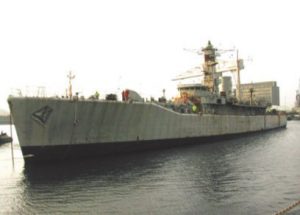 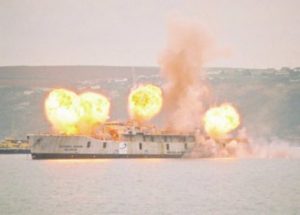 Breakwater Fort: was to have been a reef dive on the Mewstone, but the wind had picked up and our journey there became uncomfortable so we turned around, took shelter behind the breakwater and dived the Fort. This is a great dive for those who enjoy a good rummage. Many years worth of assorted junk has accumulated around the base of the fort and in addition to being interesting in its own right has  provided a safe haven for a diversity of wildlife to establish itself. On the descent and ascent the Fort walls are a joy to behold. Each crack between the blocks containing an assortment of critters; be it Tompot Blennies, Velvet Swimming Crabs, Squat Lobsters, Fan Worms to name but a few. Once again the good visibility made this dive a real pleasure.

[Kevin] Chris & I had a very pleasant trip down the M5 & A38 to join the ‘advance party’ who had already established the campsite beachead & ‘tested the waters’. Rob, Hazel & the boys had the boat already hooked up with Tim. John arrived shortly thereafter.

Rob had a leaky drysuit from Friday so kindly offered to Cox so in slightly overcast weather we stowed our kit & launched around 9; almost high tide so no issues. I took a turn piloting the boat across to the Barbican to drop off Hazel & the boys – nobody paid me for the taxi though! 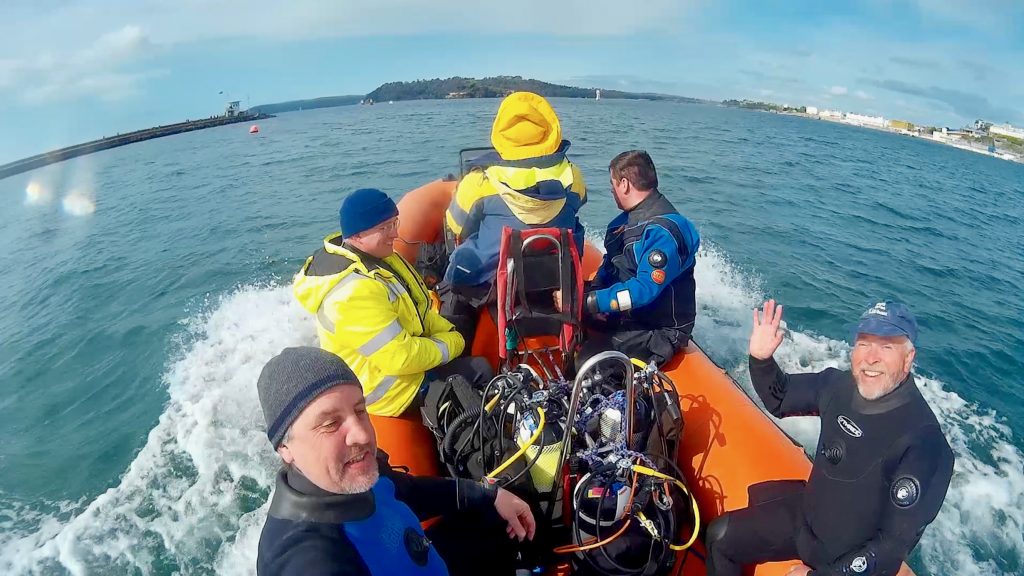 Then it was out of the harbour & round Rame Head in a somewhat bouncy sea to the first site:-

Scylla – I didn’t think I’d dived this but looking back I see there was one other time; regardless, once is never enough!  Chris & I were in first so after efficient kitting up help from Rob & Tim we made a relaxing descent to the wreck.

Chris led the way round the wreck which is pretty big and still fairly intact. We carefully ventured down some of the covered companionways & generally had a good old rummage; not into the hold as these days divers are advised not to, though you could in places see clear through to the other side! Launching a DSMB we ascended & reported pretty good viz (5m+), plenty of growth on the ship and a few fish interested in these new interlopers! 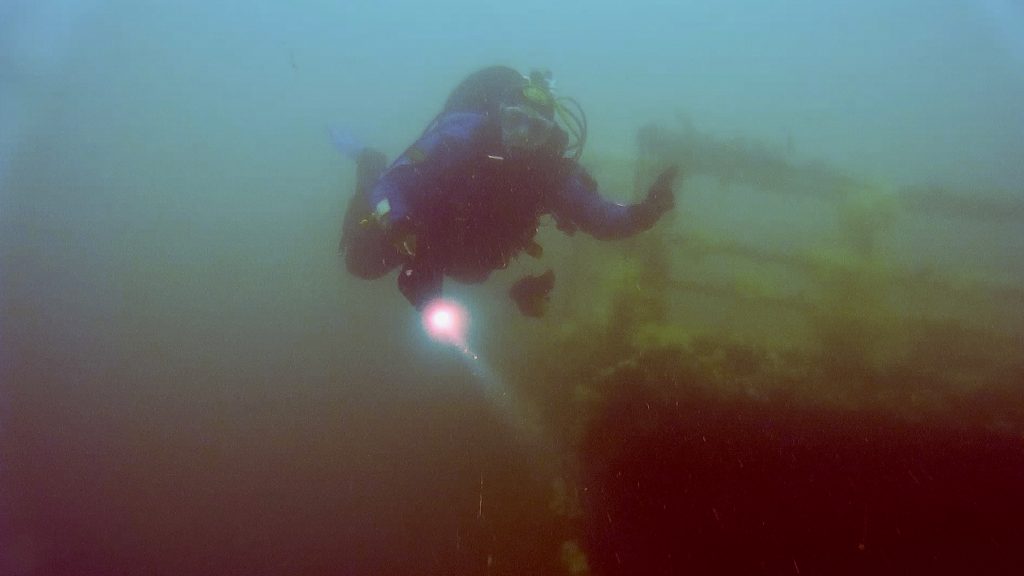 Chris L on the Scylla – viz was a lot better than it looks!

Tim & John were still down when we returned – surfacing 20 minutes later. We initiated a double underarm lift to get John in & he was chuffed as punch. 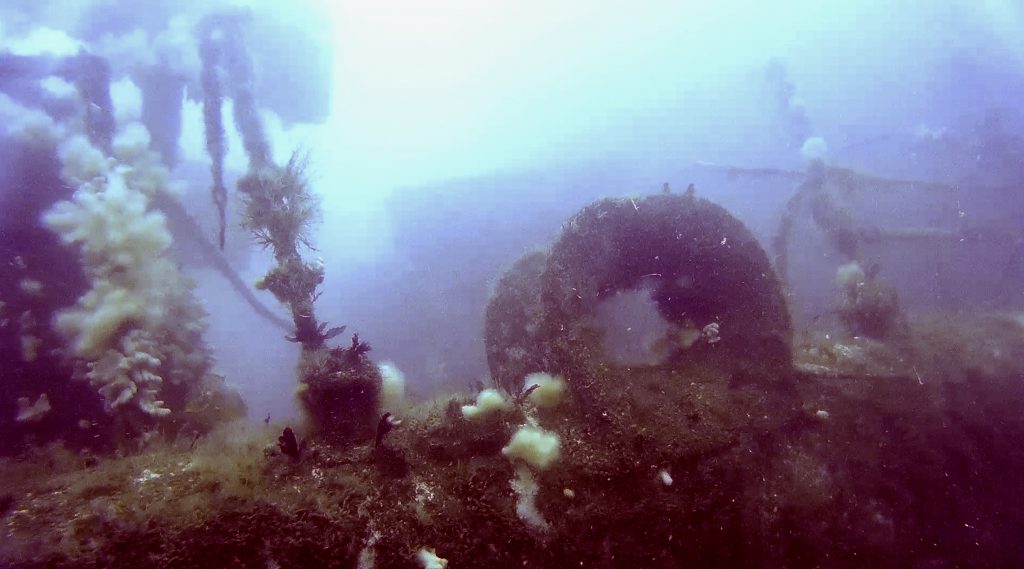 A 45 min break for lunch – far too many mini pasties!, then it was just Tim & I for the next dive:

James Eagan Layne – An old favourite this. Again a nice leisurely descent, into even better viz: 7m plus. I led this one, firstly along pretty much the full length of the outside of the hull & then back along inside for a slower ‘reccy’.

With that level of viz you can’t help but appreciate the sheer size of the huge girders & plates of the hull, not to mention the volume of the various jumbled items of cargo. I think this is the best visibility I’ve dived her and around halfway through the sun even came out to help.

Inside we came across a couple of Tompots, one of which really wanted it’s photo taken but I’d elected not to bring the camera – doh!. Regardless we found plenty to stick in our memories with the various swim throughs populated with lots of bib, pollack & wrasse. 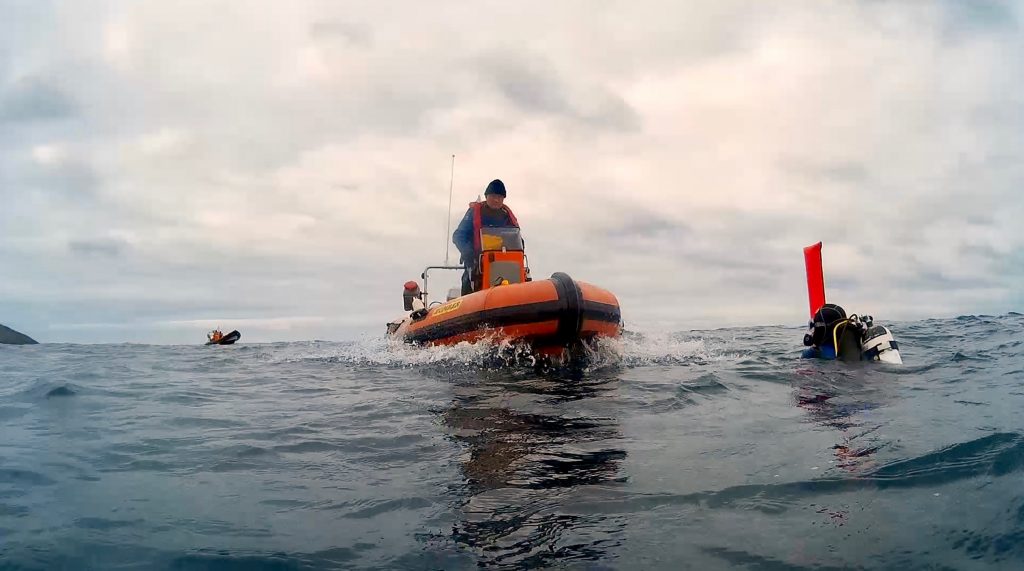 The trip back, skippered by Chris was much smoother than the trip out and once we’d stowed the boat & cleaned off the salt we were to be found sinking a nice pint of Doom Bar in the Mounbatten bar – it seemed only polite!

Later we all met up at The Ship Inn for a most excellent meal with Hazel, the boys & Jan joining us.

Sunday started with weather as good as Saturday finished. A hearty full English amongst a scattering of sequins & decorations from the wedding held at Mountbatten last night & it was off to collect the cylinders, load the boat & head out to dive

The Elk:  this is a 181-ton former Grimsby fishing trawler, built in 1902, requisitioned as a minesweeper in WWI and sunk 27th November, 1940 by hitting sea mine dropped by German aircraft near the Penlee Point entrance to Plymouth Sound – no casualties.

Chris Tim & I were in first, borrowing the shot from Clidive, a London club that had just about finished diving. We offered to retrieve & return it when finished – ‘cos divers are a sociable trusting lot 🙂 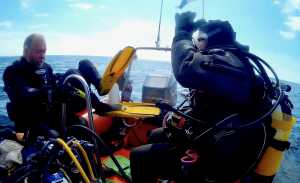 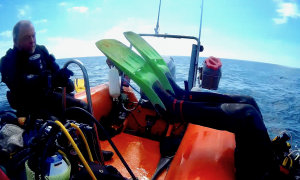 At around 29m this was a good opportunity for Nitrox & with a 31% mix we got a good 25 minutes on the wreck – enough time for a couple of circuits & some good exploration. The Elk is upright, around 5m proud of the sea bed. She’s fairly intact, except for the mine damage on the port side and lacking any brass fittings or props. Plenty of fish of the usual suspect types hid just under the decking spars. Very visible was the winch standing up from the deck with its large encrusted gears.

The nearby reef (5 minutes SW from the port side) is apparently excellent but we didn’t venture that way; apparently some nice small drop offs with the top about 20m. 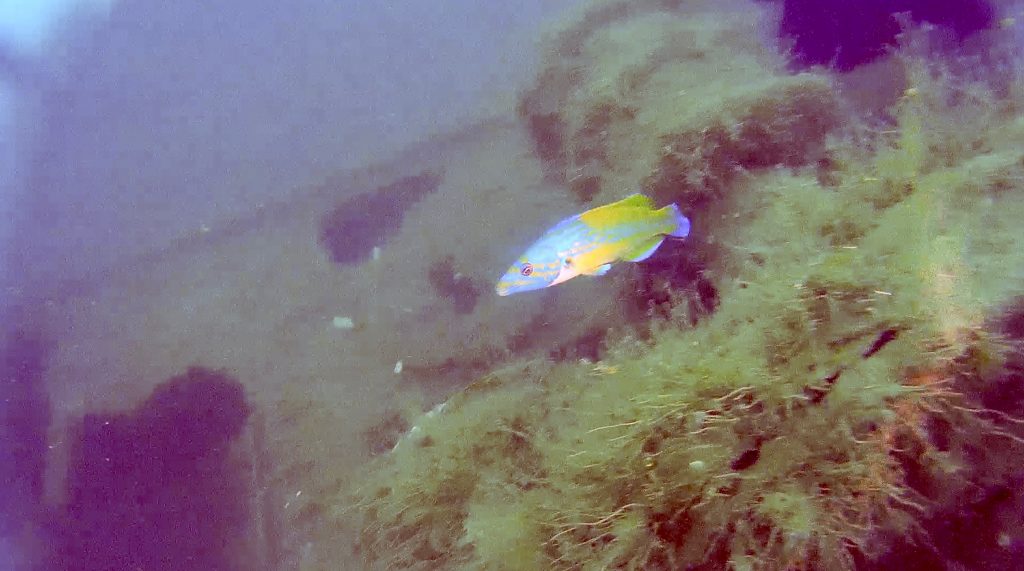 Life on the Elk winch 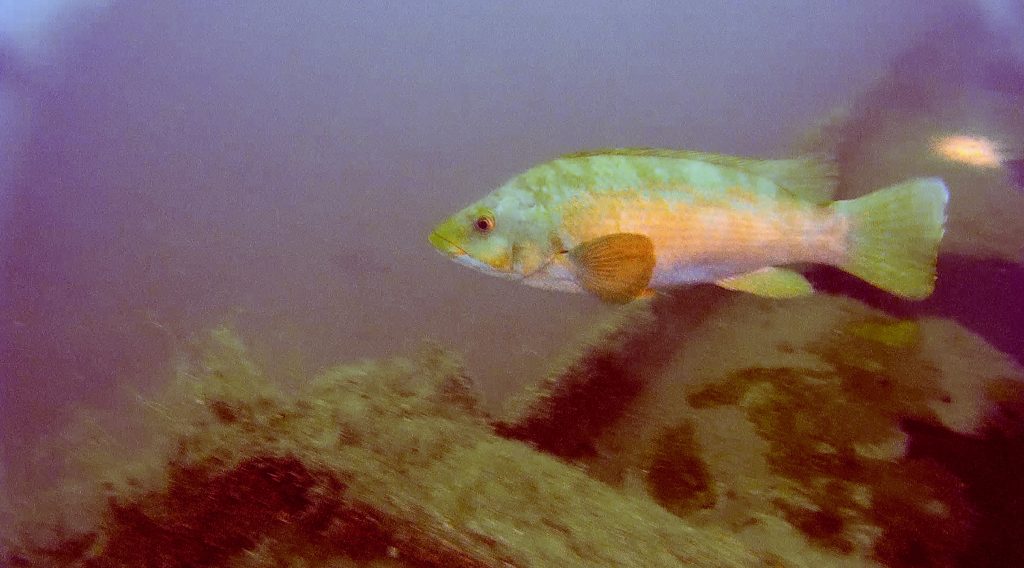 More life on the Elk

Back to the boat & in went Rob (his drysuit ‘Blackwitched’ together) & John. While down we got a call from the Longroom that the ferry was due & could we clear the site by 12:45. Just as the ferry passed our divers surfaced & wondered what we were pointing at until they looked behind them!

We utilised the newly developed Clayton lift to get John into the boat; less than automated as it relies on two crew to operate but very effective! 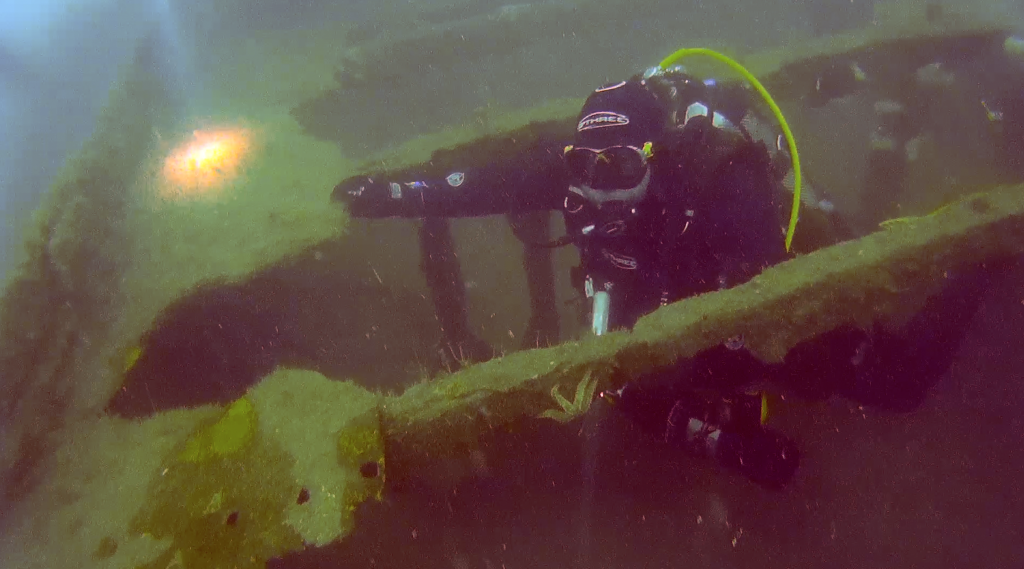 Tim – You can’t take him anywhere!

We’d heard viz on the Poulmic was excellent & after indeep provided us with exact coordinates it seemed rude not to pay her a visit!

We headed out again this time with Tim coxing to the co-ordinates we’d been given. My mask was faulty so I sat this one out while Chris dived with Rob & John. The wreck is now scattered across the seabed between reef outcrops with parts such as the engine & deck winches available to be explored. Our party reported there wasn’t a lot left but it was a nice dive to finish the day. 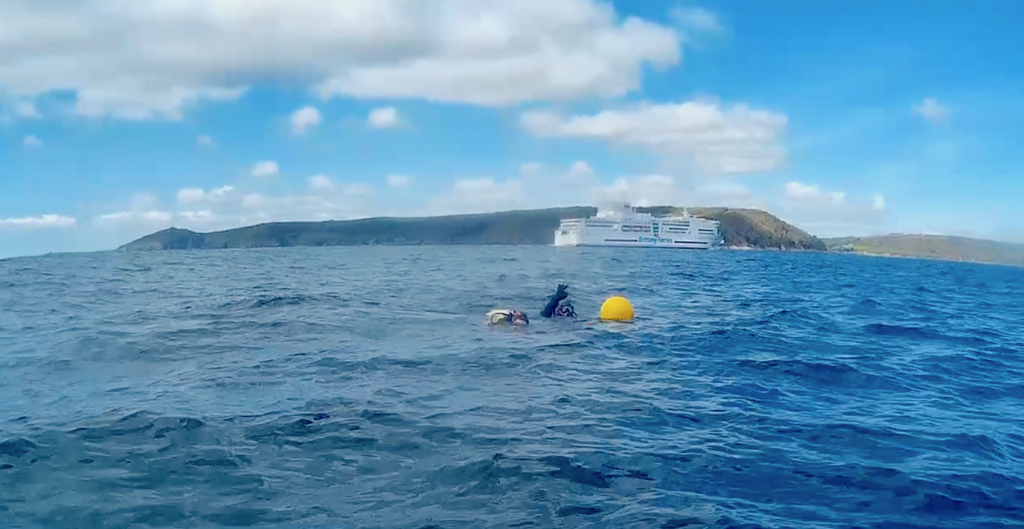 [Tim] In the evening we helped Hazel celebrate her birthday with a delicious meal, good beer and good company in the Foxhound pub in Brixton. It was a great opportunity to discuss and share the highlights of a very successful days diving.

Many of our dive party had had to return to Bristol so we were left with a much reduced crew. This was therefore an excellent opportunity to give one of our newest, youngest trainee Ocean Divers (David) some RHIB experience. While David was not actually qualified to dive yet in open water, he did gain some useful practical experience of how RHIB diving is done. The intended dive site was to have been the Glen Strathallen, but unfortunately a fisherman had placed his crab pots in the close vicinity of the wreck and his marker buoy was mistaken to be a shot on the wreck. While it was a little disappointing not to be diving on the wreck itself, the bottom was very interesting with deep gullies strewn with broken pottery and abundant with a variety of sea life. It’s quite probable this particular location was hardly ever dived, which made it all the more interesting with the potential chance of finding something out of the ordinary. Once again the visibility was good and the dive very enjoyable. 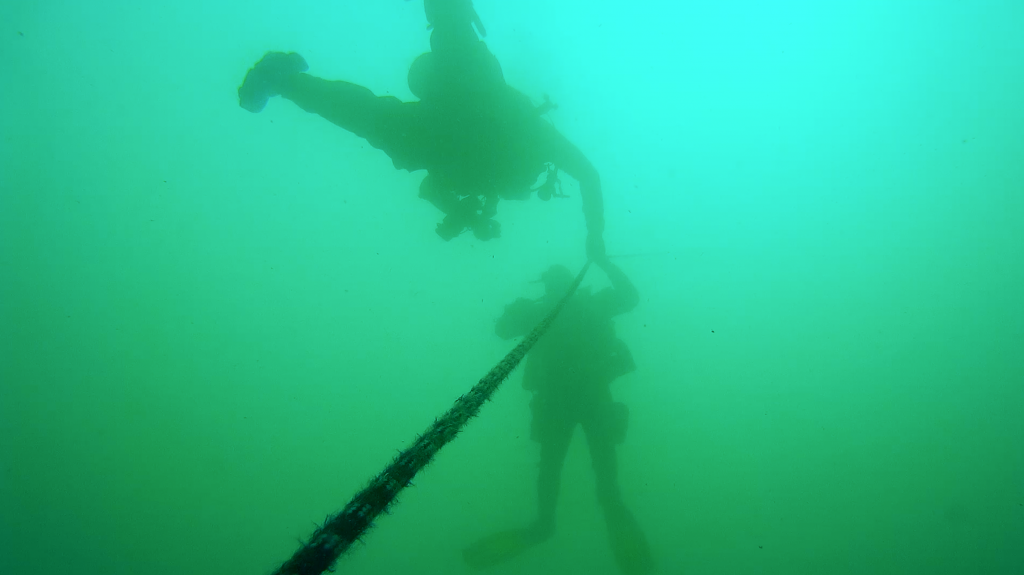 So that was an end to the Easter diving. The boat was recovered, washed down and put away.

[Tim]: The visibility was some of the best the party had seen and I can’t recall ever having better weather at Easter. I was camping and for the first time in the long life of my tent, didn’t actually use the guy ropes!!!

Overall the weekend was an immensely enjoyable and successful event. I’m all fired up and looking forward to the next one.

[Kevin]: A big thank you to John for organising the event, Tim for towing the boat, Rob for keeping it going and everyone else for their contributions, whether it be wit, travelling companion, buddy or comedy relief!
I had a great time and like Tim am looking forward to the next excursion!