Scubafest – a yearly gathering of divers at Pentewan Sands holiday park on the south Cornish coast with diving straight from the beach just outside the tent – where do I sign up!

Tim & Chris were the advance party establishing the beachhead (literally!) & kindly putting up my tent too. I followed later on Friday and arrived some 3.5 hours later to find them on their third sampling of Tribute at the Seahorse, the on-site pool/bar/restaurant complex. They’d kindly waited so we could eat together but had started a large bag of doritos, however a seagull had other ideas about them finishing it! 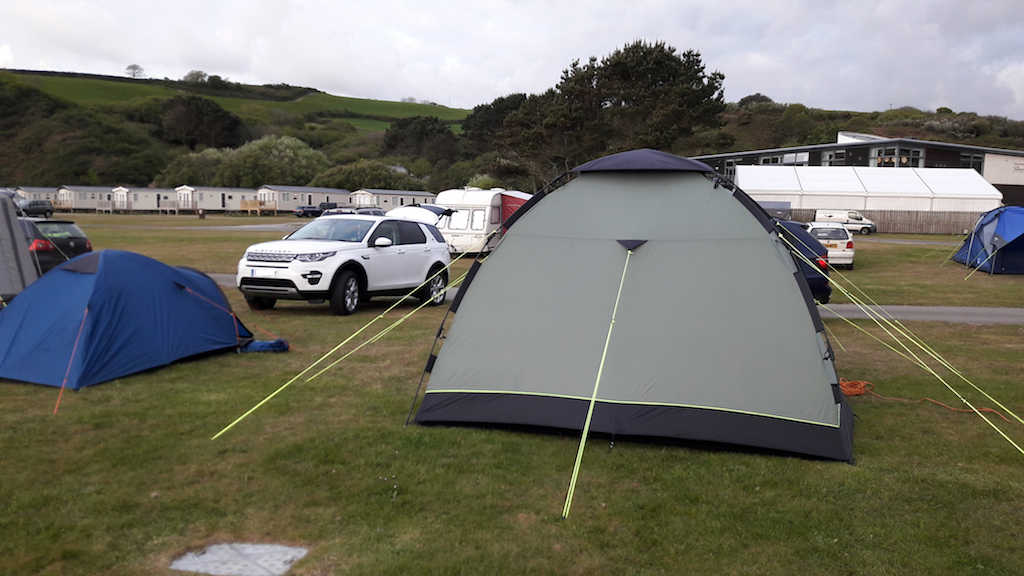 The site was starting to fill up so we relaxed & discussed the weekend ahead. A little later I took off to explore the park – well laid out, large pitches serviced by plentiful well maintained shower, washing & toilet blocks. A large shop (with anything & everything you might ever need), fish & chip shop & burger joint completed the picture and the beach really was right there! 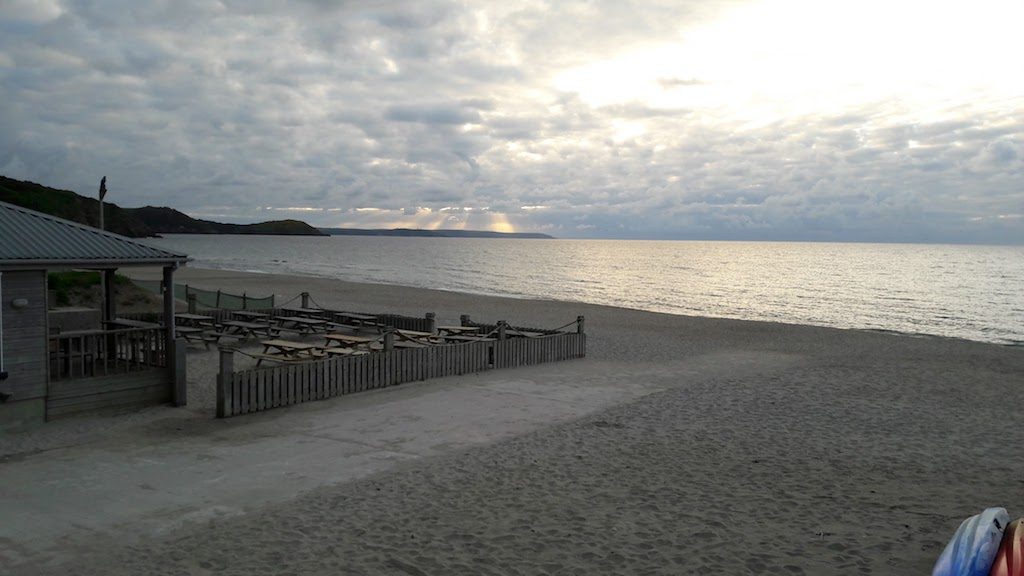 Pentewan beach – the calm before the storm!

The weather wasn’t looking so good so Chris booked us on an early dive Saturday morning out of Newquay – the great thing about this part of Cornwall is its only 45 minutes to the north coast if the south isn’t so good. 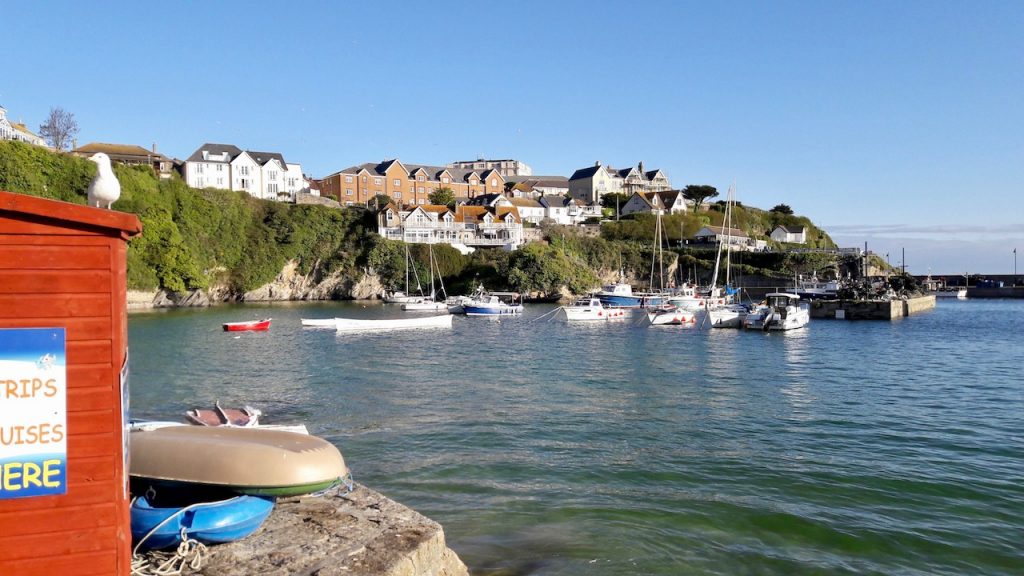 We joined 7 other divers and loaded our kit onto Newquay divers large black RHIB ‘Tornado’ in Newquay harbour & then we were off. The skipper pointed out a few shore diving sites on the way before we got to the destination- Carters rocks – or Seal rock (for the advertising brochures!)

Our fellow divers on ‘Tornado’ with Dive Newquay

Despite there being 10 divers, the skipper & a deck-hand on the RHIB it was still remarkably roomy 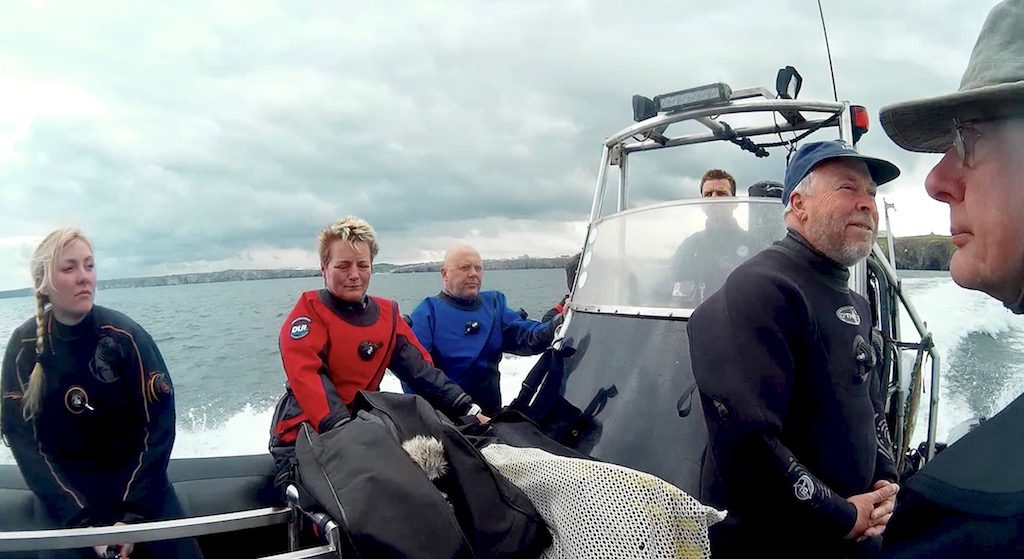 Carters rocks are south along the coast from Newquay, consisting of some largish rocks offshore from a rocky coast with a number of cave inlets. A few seals were playing on the coast as we prepared to enter the water.

Below there were a lot of gullies liberally overgrown with kelp and then sandy patches. There was some smaller life in the crevasses while large brown wrasse swum amongst the fronds & we found a spider crab clinging to the roots as the swell tossed it to & fro 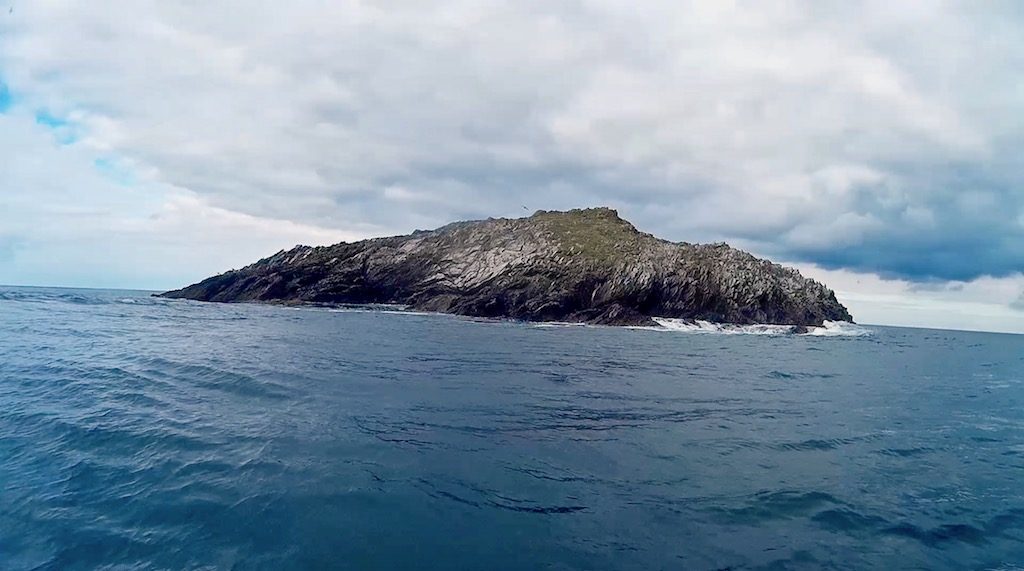 As we entered the gap between the coast & the rock, what was a slow drift increased so dramatically it literally spat us out onto the surface past the rock – quite exhilarating!  A couple of the other divers indicated the seals had actually approached them but we weren’t so lucky. The whole dive was around 55 minutes and all under 10 metres.

All out we speedily headed back to Newquay: the RHIB may have been fully loaded but it really could move with its two large engines.

We dropped our cylinders at their shop for a fill, grabbed a Tesco meal deal (we know how to live!) & visited the old lifeboat station & slip while we waited for the fills. The launching ramp is quite impressive & when the tide is in shore diving can be had from this area. 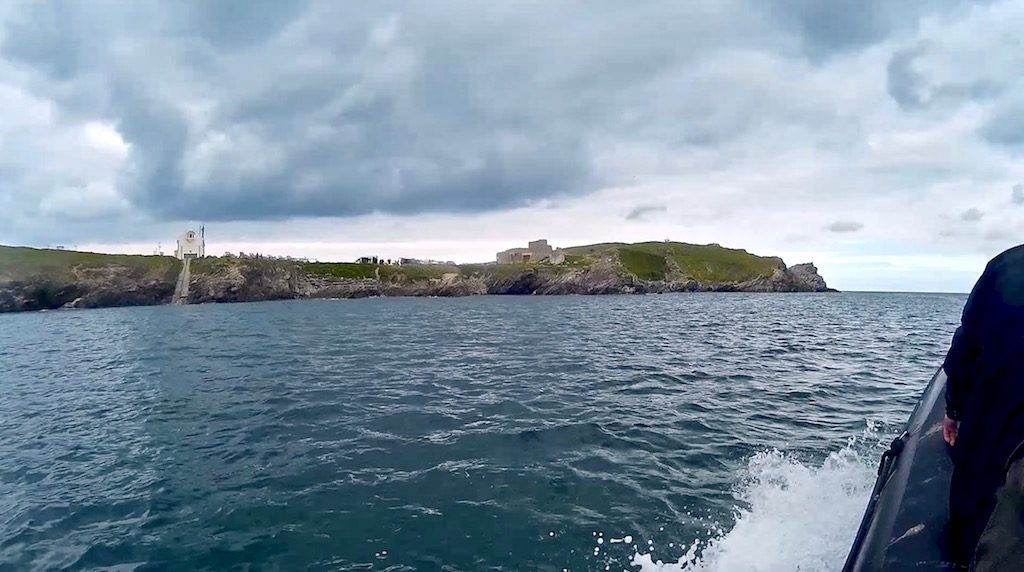 The old lifeboat slip – and shore dive site (divers on the top of the cliff!)

Cylinders loaded we headed back for a nice cuppa & then a wander round the various exhibitors in the Scubafest tent. Mares, Atomics, Suunto, Dive Rite, Marine Archeology etc.All of whom were happy to provide advice & listen to feedback from those of us who had experience with their kit – a good opportunity we all took up. 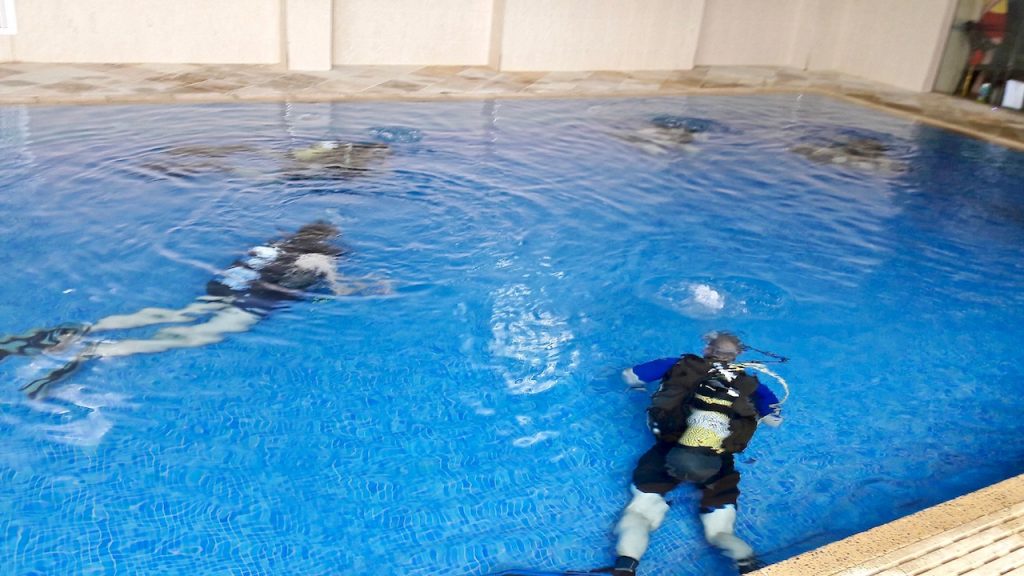 Inside the exhibitors tent

Later it was time for a shower & change & then off to the Seahorse –  tt was fancy dress : pirates but we’d forgotten & it appeared many had misheard (deliberately?) and were dressed as parrots! 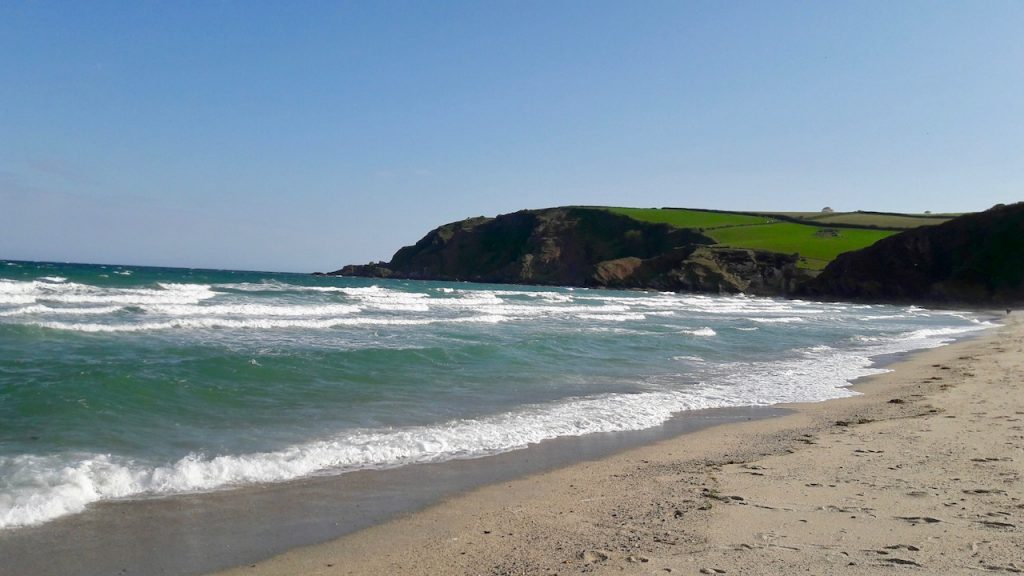 Pentewan beach: Saturday – It is a surf festival we’re at isn’t it?

Beer & some home made fishcakes hit the spot nicely & then Cornwalls’ most hard working band (apparently) – High Voltage came on around 9 – I have to say they were pretty good and allowed us all to relive some classic tracks from the past.

Sunday dawned with the wind still off the sea & things looking a little rough so we packed a light lunch & headed for the North Cornish coast to check out potential shore-diving sites. 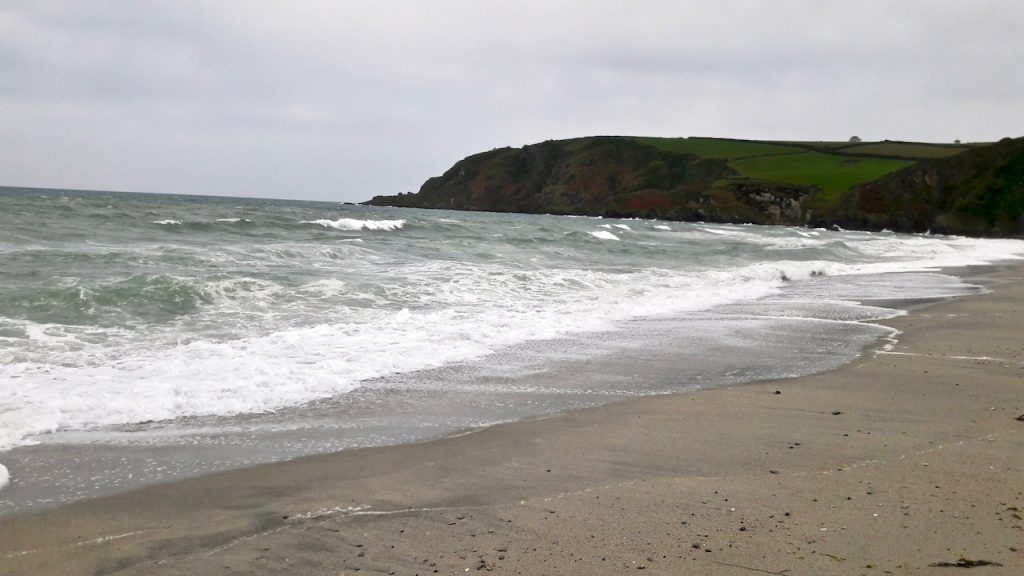 First stop was Port Gaverne, which looked pretty good (& there was even a pub), though it would require kit to be dropped off as there was no parking at the entry point, though there is a car park further up the road. Making a note we continued on our way 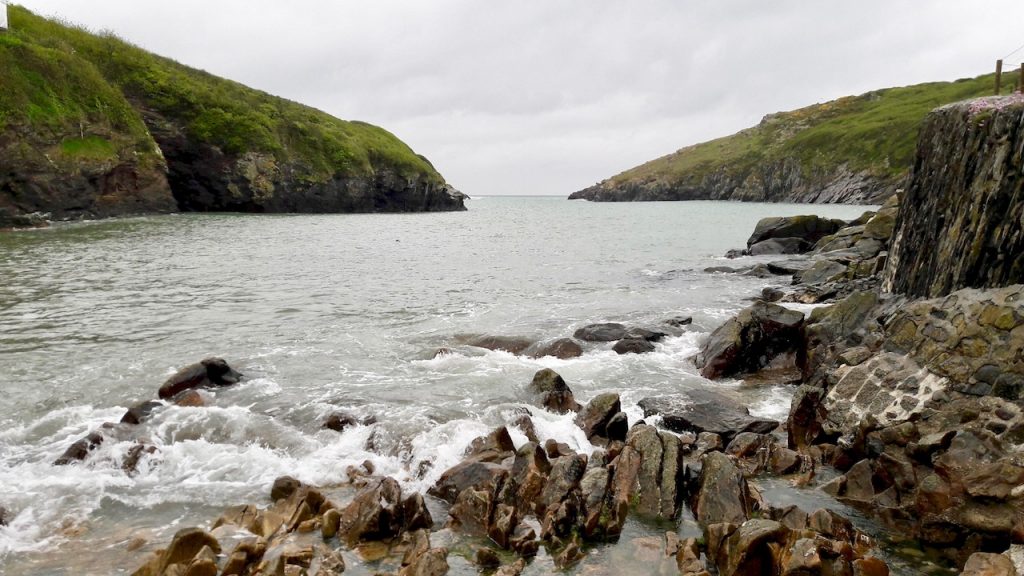 Next it was on to Port Quin, the small cove offered both convenient parking & easy entry (but no pub), however today things looked a little too rough but once again site duly noted 🙂

A nice warming pot of tea & a slice of carrot cake in Wadebridge before we headed back to Scubafest. Tim realised his mask was still on ‘Tornado’ & called Dive Newquay who found it & kindly brought it across later that afternoon as they were attending the Try Dives.

Then it was time to bid farewell to Scubafest, for this year at least but I reckon we’ll be back!

Thanks to my buddies for making the effort, Dive Newquay for getting us out, Atlantic Scuba for their shore dive site advice, the Scubafest organisers for their efforts & last but by no means least High Voltage for bringing back some great musical memories on Saturday night 🙂

Viz not so good! – Tim goes for one last dive!