In August 2003 the Aerodivers club celebrated our club wreck (The S.S. Bretagne) being 100 years old as a ship. Since we didn’t know the date she was actually launched, we chose the date of her sinking to be the day to celebrate. It was a great day and weekend and it even made the local Bristol Evening Post newspaper. 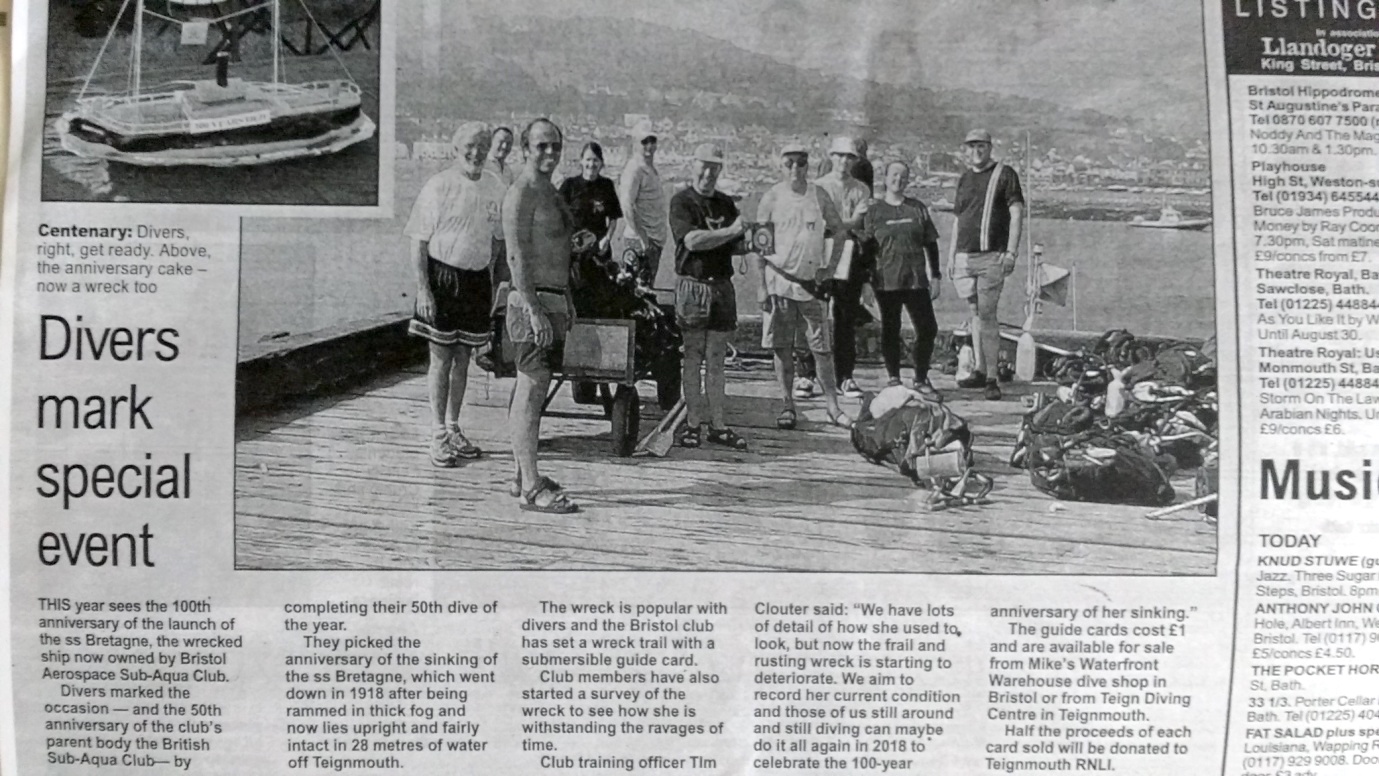 In this article I (Tim Clouter) was quoted as saying, “We have lots of detail of how she used to look, but now the frail and rusting wreck is starting to deteriorate. We aim to record her current condition and those of us still around and still diving can maybe do it all again in 2018 to celebrate the 100-year anniversary of her sinking”. Well here we are and how those 15 years have flown!

I’m delighted to report I am still around and I am still diving and it was my personal mission (come what may) that the club should dive our wreck and mark this once only occasion.

We had grand plans (and a Marine Licence) to restore the dive trail we established in 2003 (happy memories of an epic dive by Stuart and myself – see website) but at the Brixham/Bretagne Holiday week back in June, those plans were thwarted when we had serious engine failure on our main club boat.

We had high hopes of having the boat repaired and back in service well before the centenary but alas, boats being boats that wasn’t to be. I rang round local charter operators but couldn’t find anything happening on the actual key date of Friday 10th August 2018.

At the club Monday after pool social meeting I told the assembled members of my disappointment and frustration at not being able to make it happen on Friday and one of our members (Ian) said he had only that morning had a flyer from Teign Diving announcing some special trips on the Bretagne to celebrate the 100th anniversary of her sinking! Could this be true? I’d only called them a few days before. Ian forwarded the flyer and first thing the following morning 4 of us (me, Geoff, Neil and Colin) had secured places on the first trip of the day, which was to be on site at the very time of her sinking. Phew!

Things were looking far more hopeful but we were not home and dry yet. One serious concern was the weather. Given the near perfect weather we have had all summer it would have been a bitter pill to swallow if that had prevented it – which it oh so very nearly did!

On the Thursday evening I took a trip to Cromhall Quarry Dive Centre to get a cylinder of 32% Nitrox and then, to minimise faffing first thing in the morning, I dropped this and all my other dive kit off at Geoff’s.

I set my alarm for 4:45 and after a quick shower and light breakfast headed to Geoff’s. Noooo! ROAD CLOSED! Luckily the diversion wasn’t too much further and the roads were very quiet at that time of day. I parked my car and jumped into Geoff’s and we were soon underway heading down the fairly quiet M5. It was breezy with occasional showers, but nobody had told us not to come so we were going.

We arrived early and found the Dive Centre open and were warmly greeted by Lauren. Paperwork and briefing soon done we assembled our kit, donned our suits and in the rain headed to the boat, Seaquest, where we found its skipper, Mark, waiting. This was all good. It was the same Seaquest we used in 2003 and the same Mark who was on that trip, which added a nice bit of continuity. There were two other divers joining us, Guy and Sam who were to buddy up with Lauren. 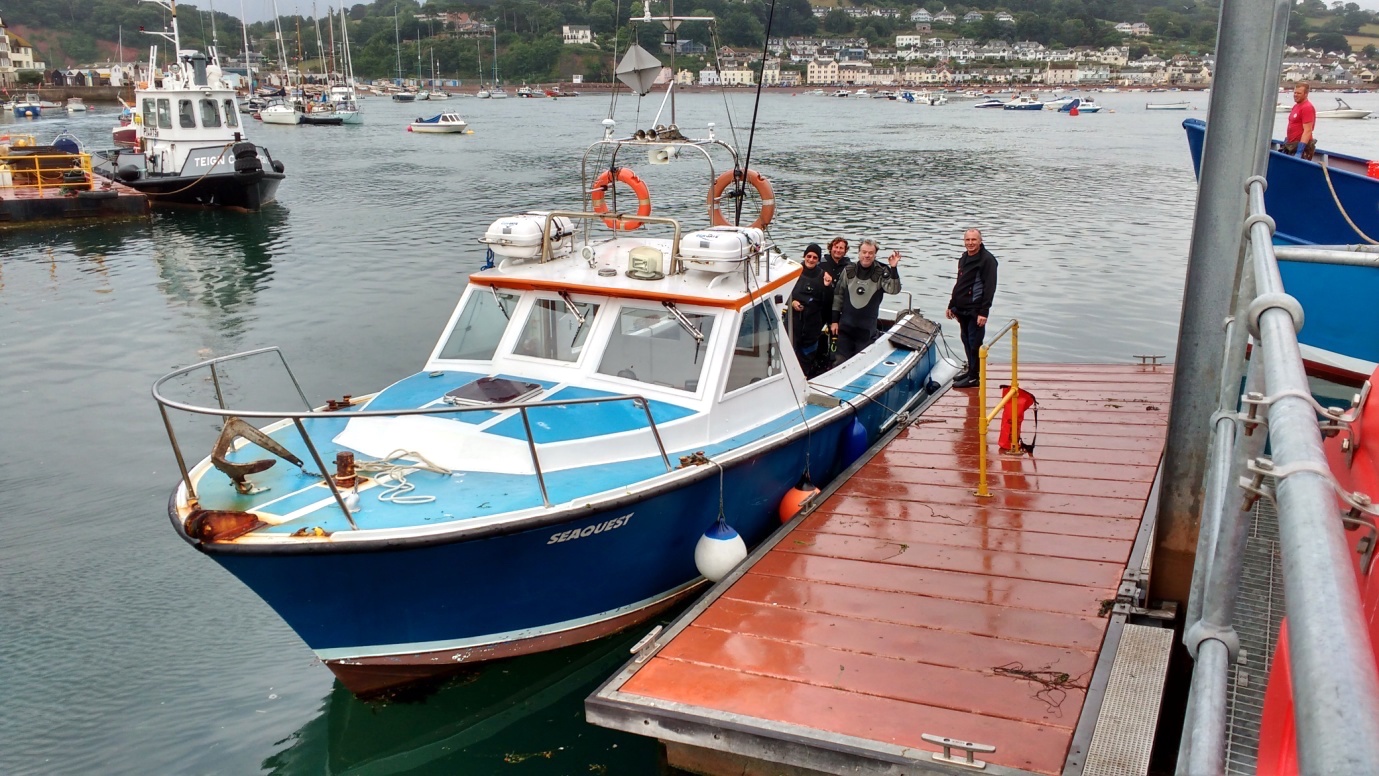 The weather was far from ideal, the sea was a bit lumpy but we were heading out and it was going to happen! The wreck was soon located, the marker shot was deployed and we kitted up and buddy checked. Geoff and I were the first pair down, followed by Neil and Colin followed by Lauren, Guy and Sam.

Initially the visibility looked very promising but as we descended and I looked back up the line to check Geoff was ok it was getting murkier and darker the deeper we went. As we followed the line a faint dark shape started to appear in the greenie gloom. Initially we didn’t know where on the wreck we were but after swimming a little way along a gunwale we found winches and hold hatch corners and determined we were on the port side heading towards the bow. This was good because we had a mission to complete.

In 2003 as part of our celebration we did a small and simple survey which entailed measuring the depth of the bow and then the relative depth at each hatch corner of the two forward holds. Our mission was to take and record those same measurements for later comparison. While the hold hatch corners are basically in the same locations, since 2003 some of the sides of the hatches have cracked and fallen away. 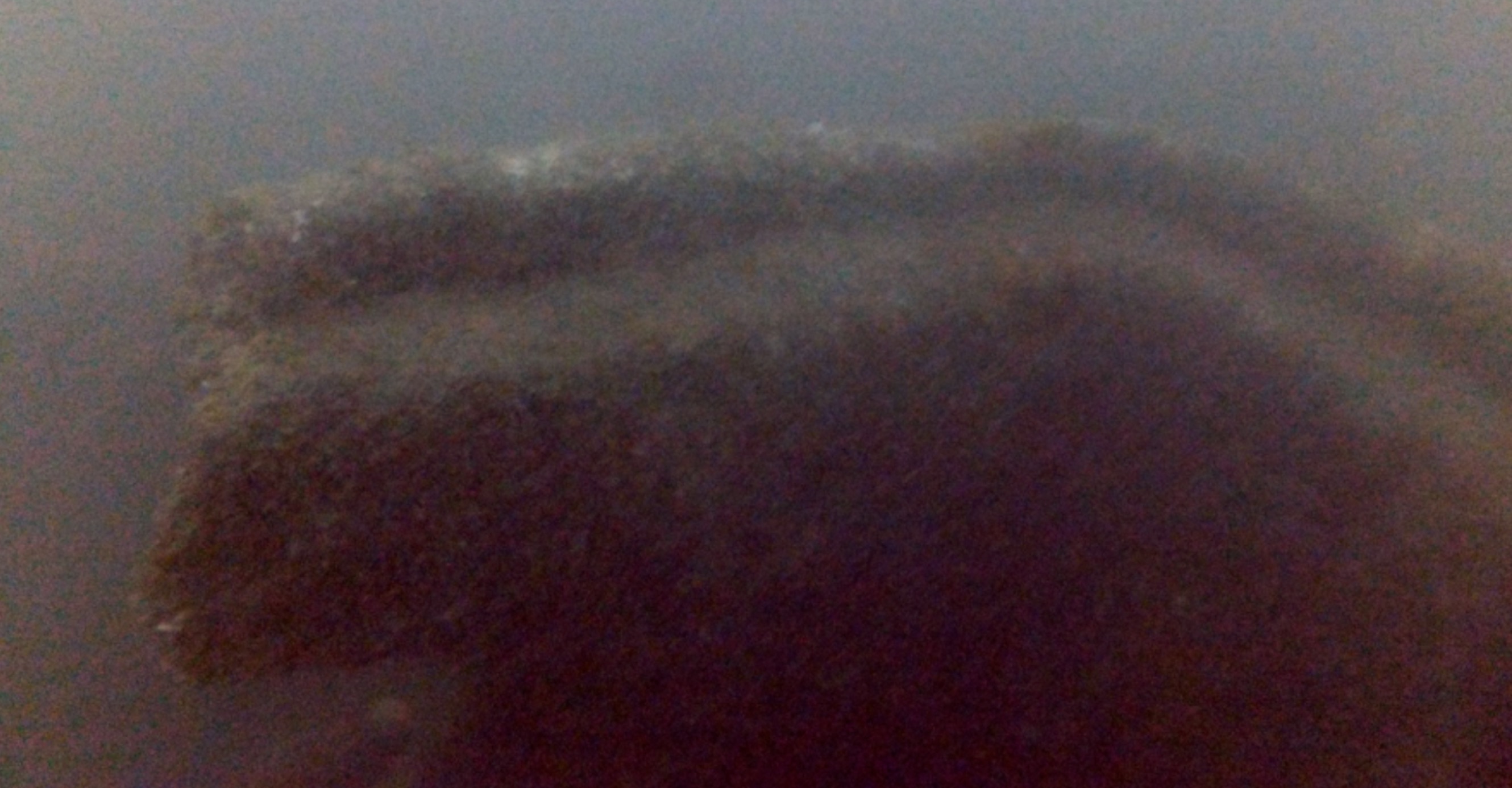 The visibility was very poor and it was difficult to see the extent of this deterioration but trying to circumnavigate the hold hatches was certainly more confusing than the straightforward circuits in 2003 when they were intact.

Once our mini survey was completed we made our way along the wreck down the starboard side to the stern. Again it was very poor visibility and difficult to take it all in. Where once there were decks there are now exposed girders but it was comforting to see the familiar shape of the spare propeller still where it should be… 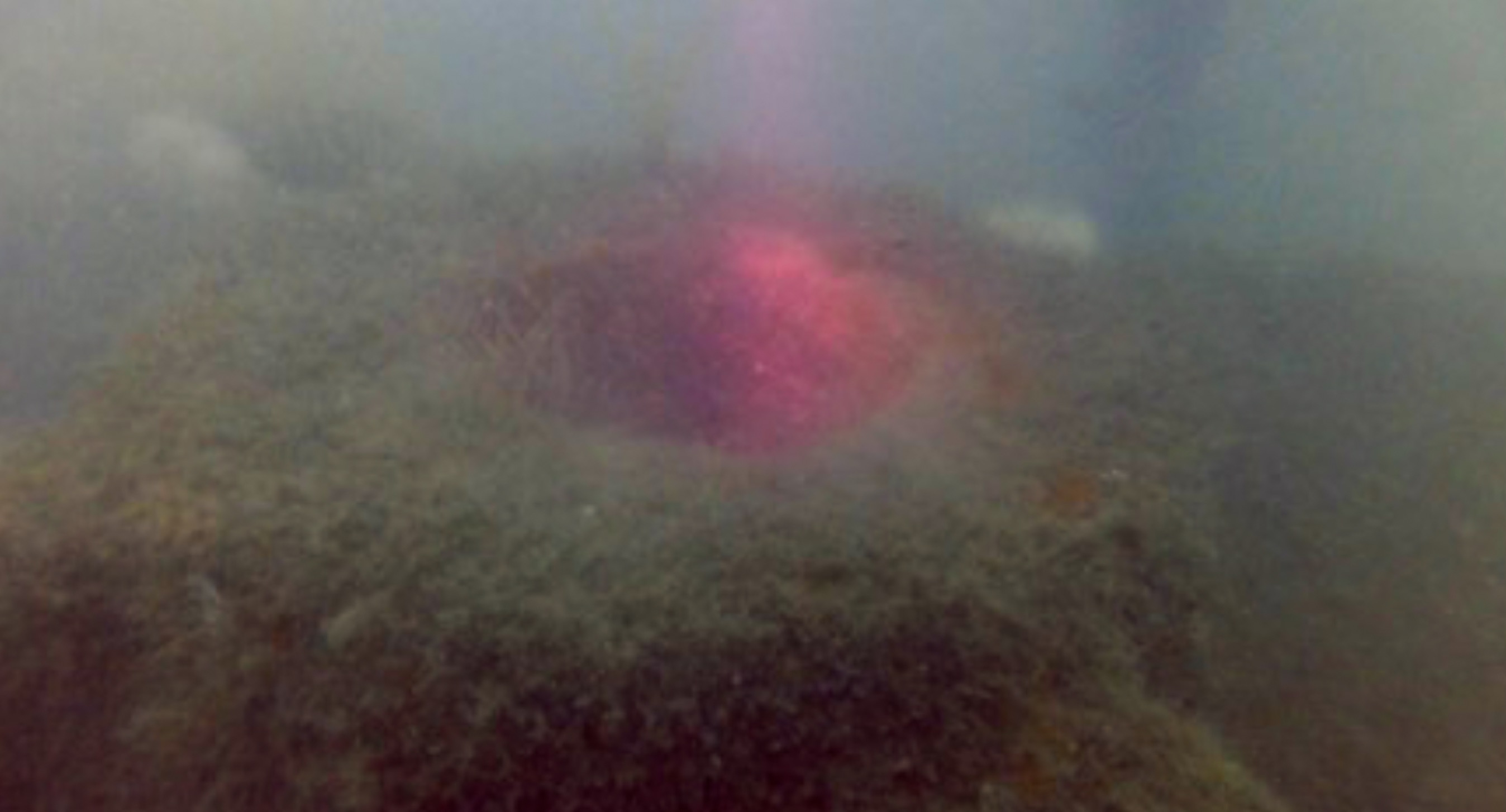 …with as usual, an edible crab in residence in its hub. 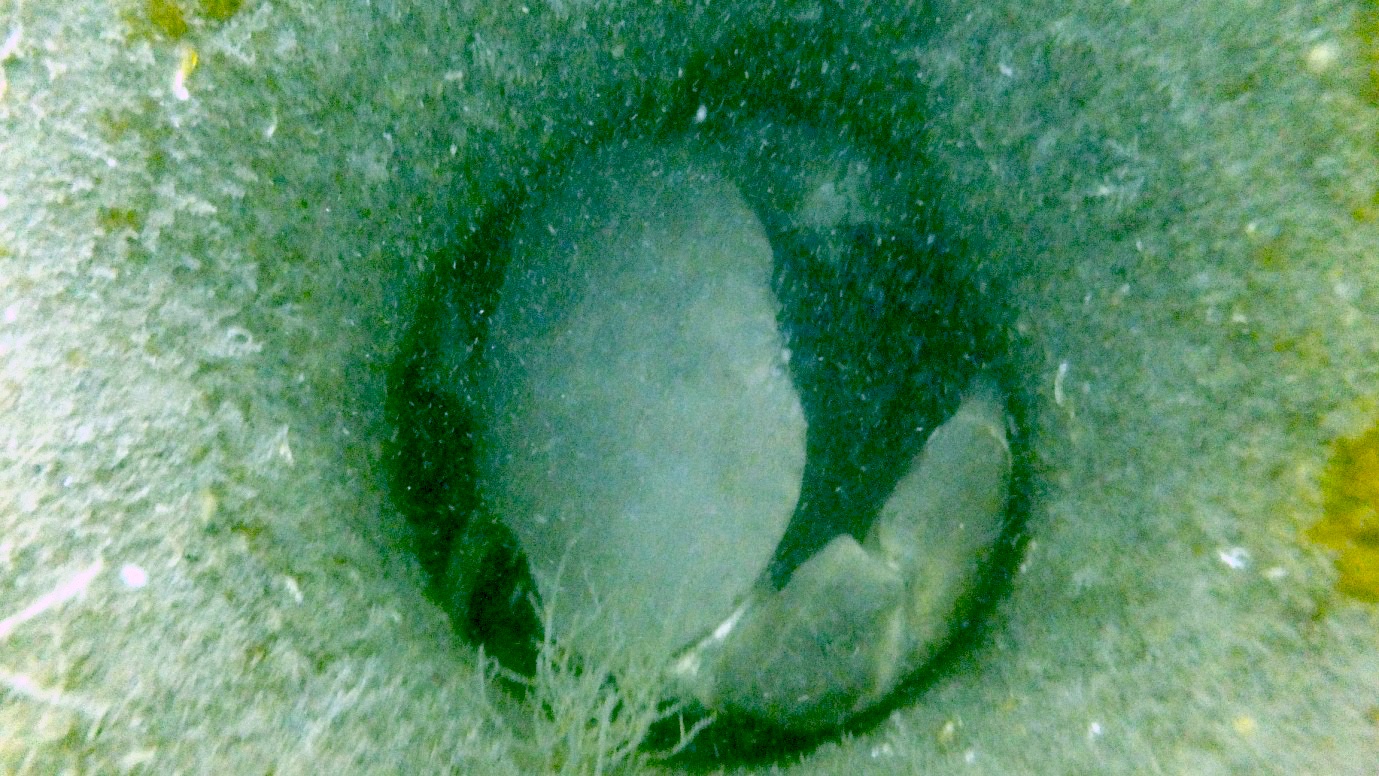 Aft of the spare prop is the gun mount, festooned in Dead Man’s Fingers, the gun having been salvaged by our club in the 70’s. 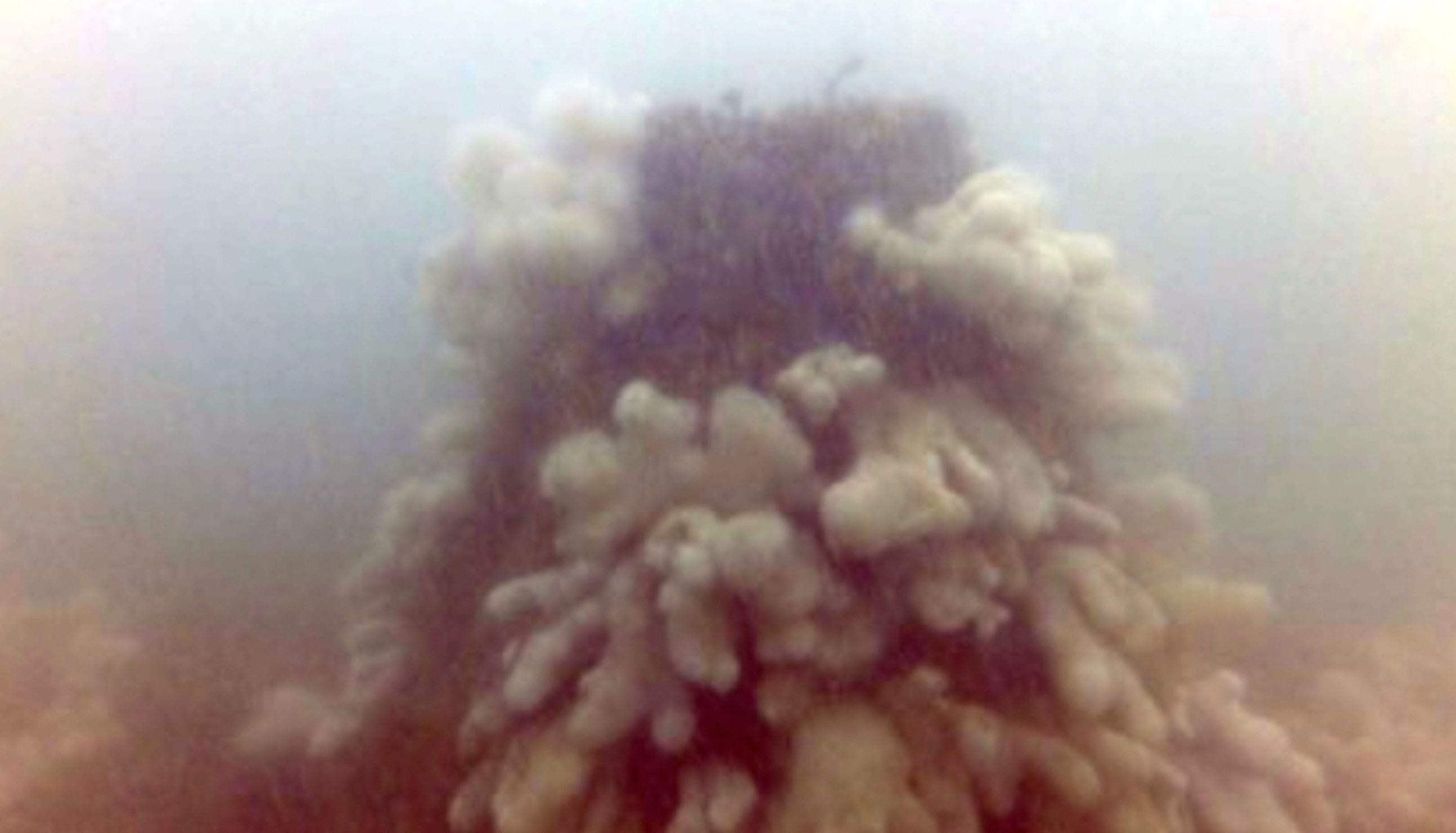 This was to mark the end of Geoff and my dive but a quick snap and video of a passing Compass Jellyfish before we surfaced. 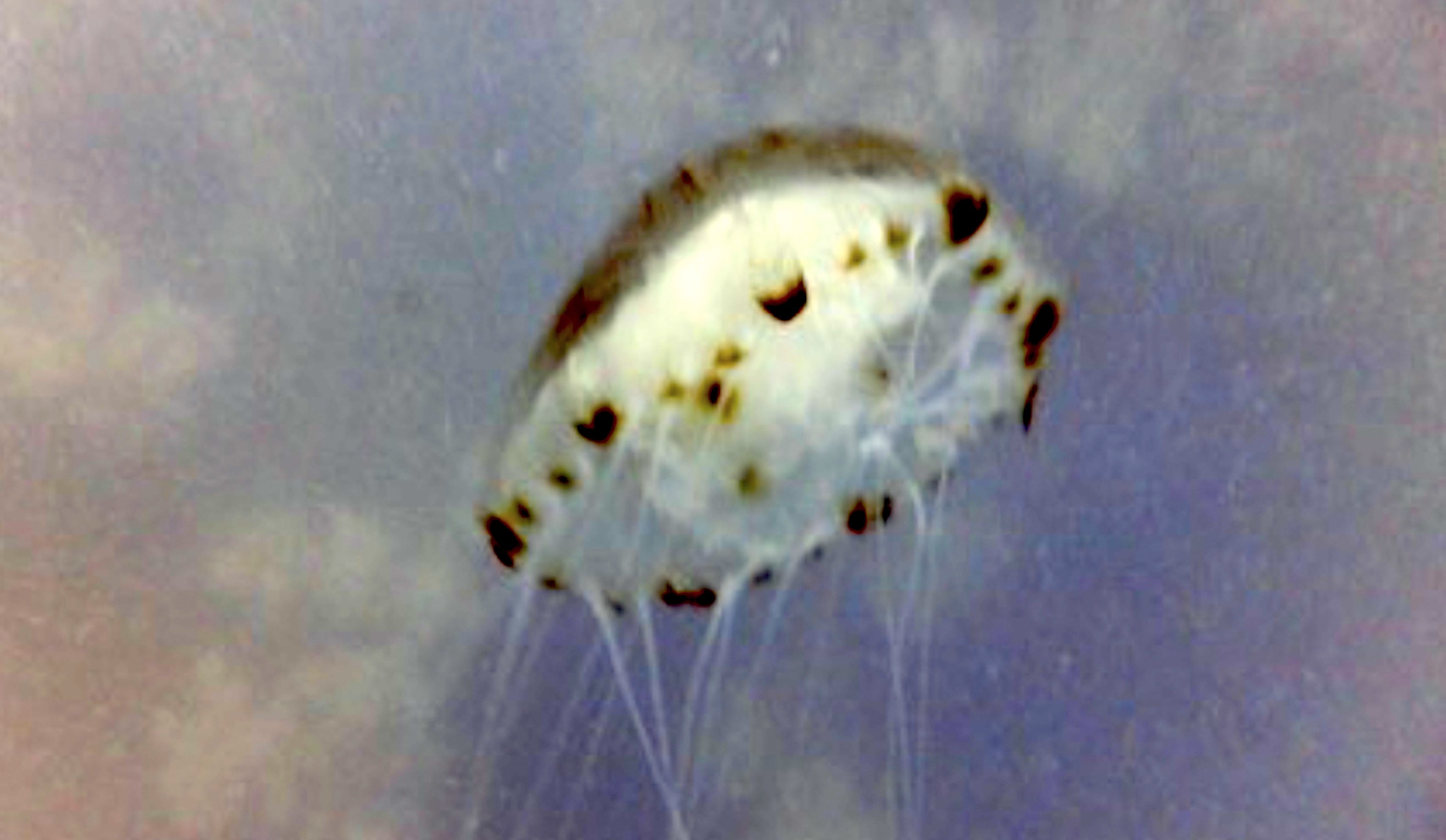 We didn’t realise quite how lucky we were to have dived her on that day. The wind and sea had picked up quite a bit since we had been down which made getting back on board Seaquest  ‘interesting’. It meant however that conditions were not safe for the afternoon trip to happen. 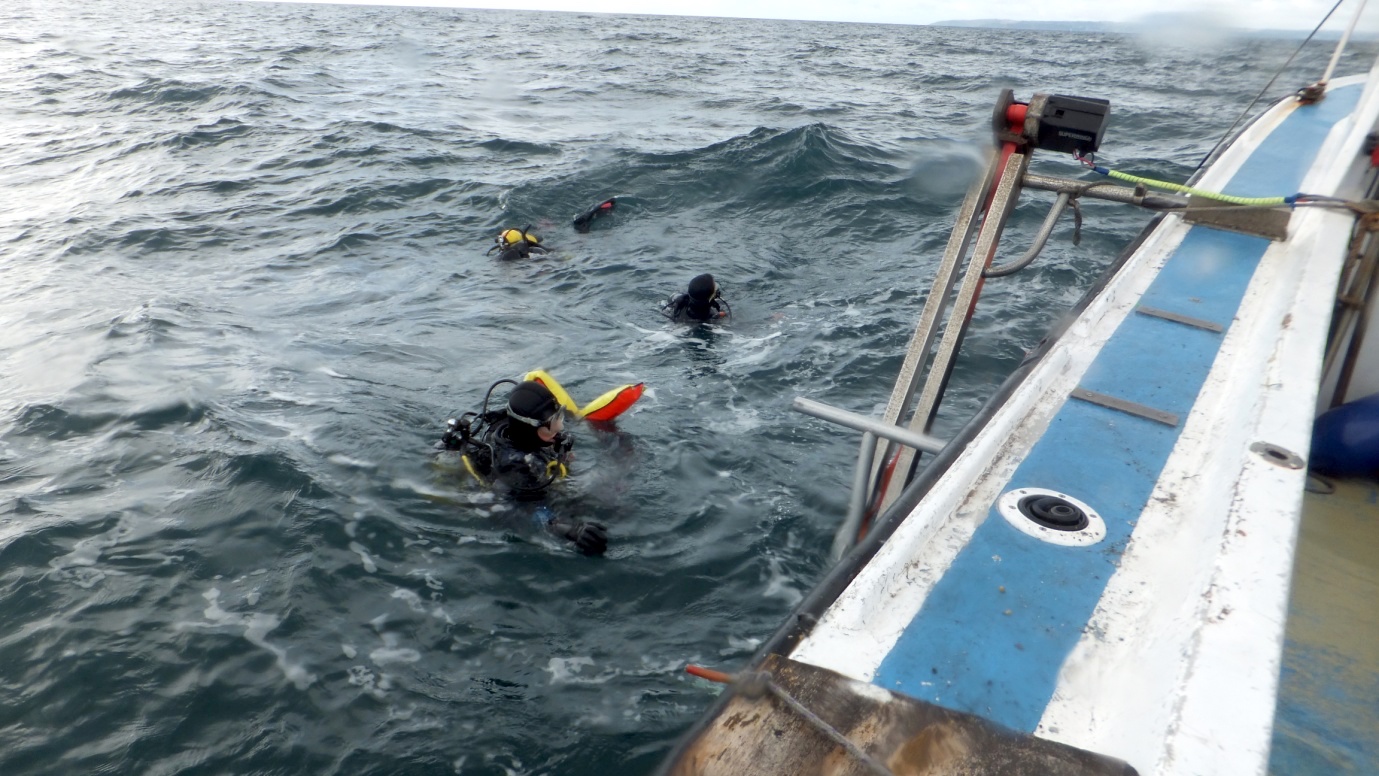 The other divers had all had a great dive too but exploring different areas, although we did have a brief encounter with the end of a pair of fins when we were heading to the stern.

After the dive, as a mark of respect I said a few words acknowledging the sad loss of the Chief Officer, Harry Watterson who so tragically went down with his ship but also in recognition that this superb and popular wreck has given pleasure to countless divers over so many years. Long may she continue to do so.

Each diver then scattered a few red roses onto the sea above her. 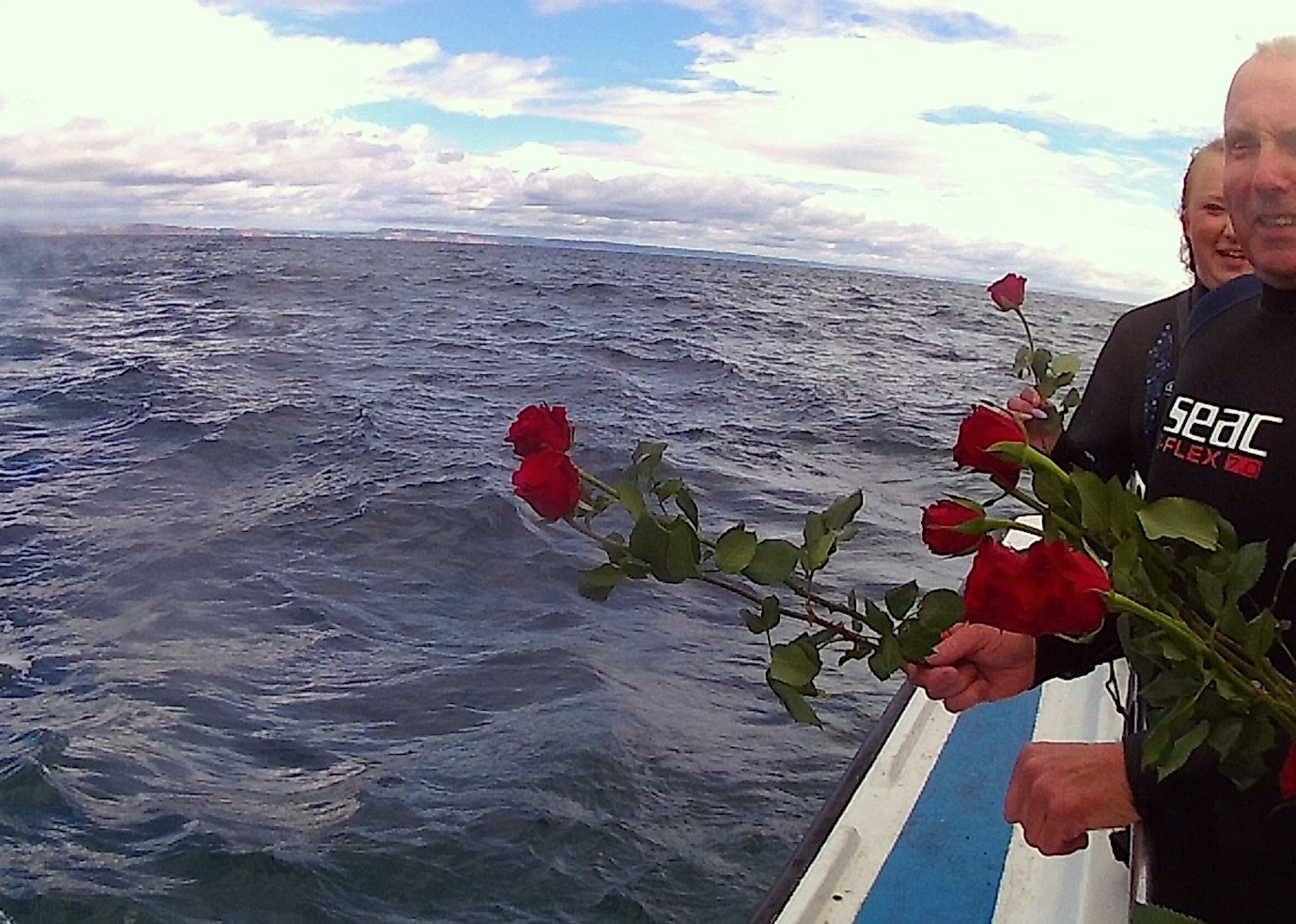 Then it was a wet, windy and bumpy trip back to Teignmouth while being spattered with spray and rain and the ubiquitous seagulls following us home. 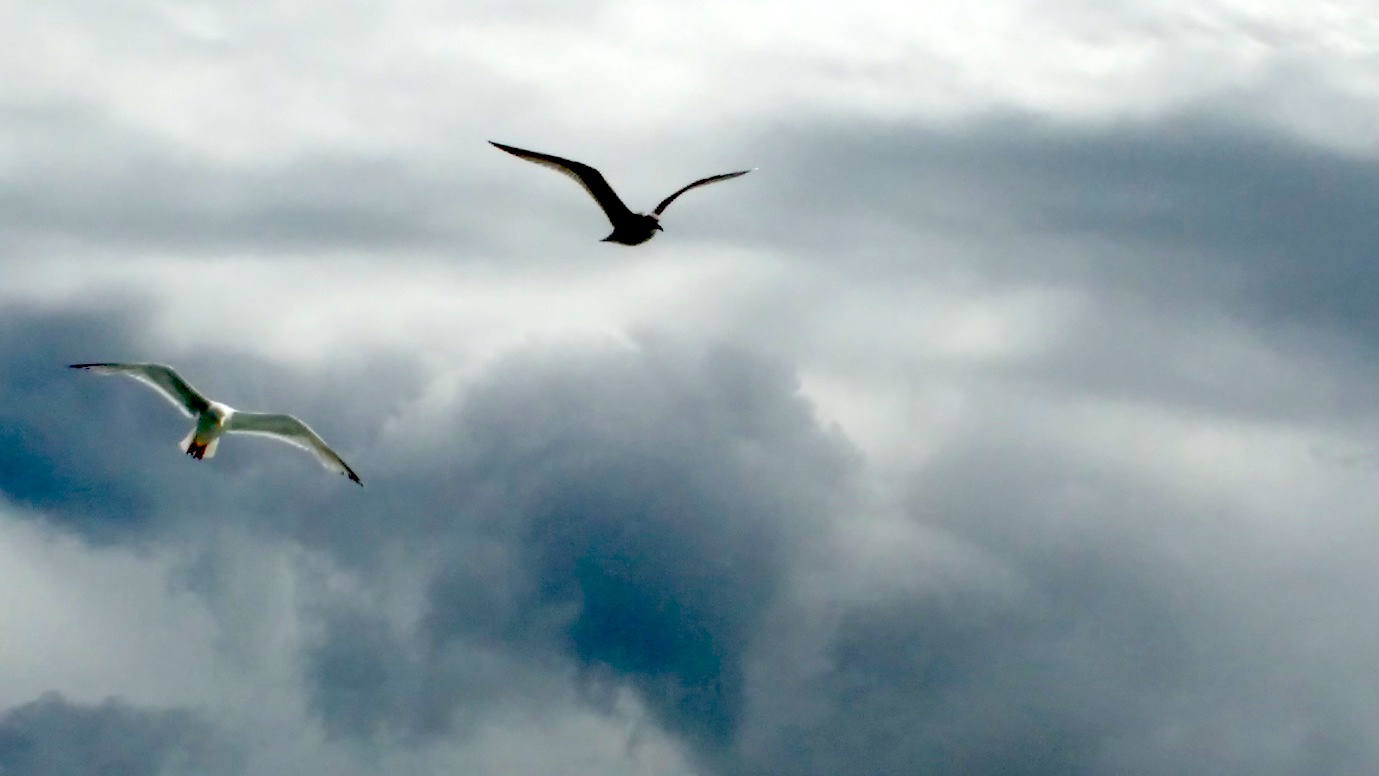 It’s sad to see the significant deterioration in the 15 years that have passed but she is still upright, shipshape, teaming with fish and when you get a bit of visibility, a really superb dive! We look forward to returning to her again soon.

Thanks to Teign Diving Centre for putting this trip on and to Guy for sharing some of his photos. 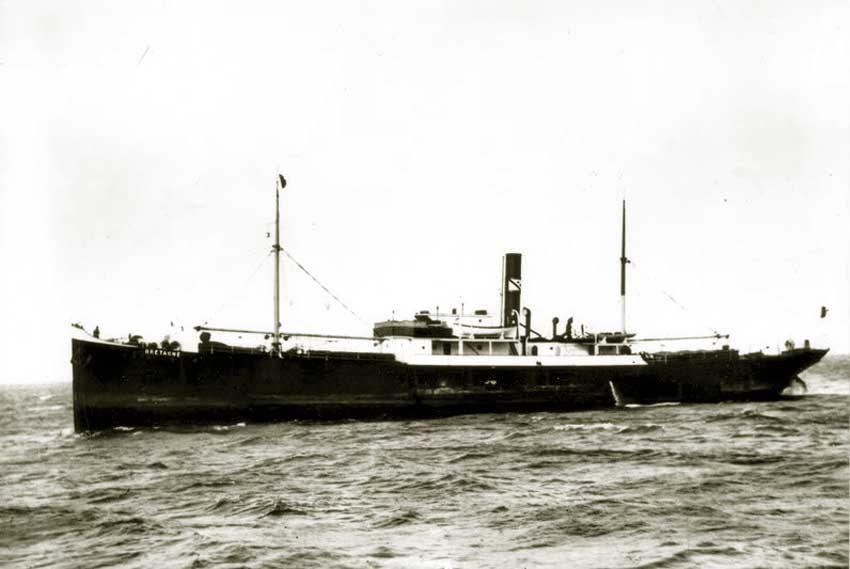 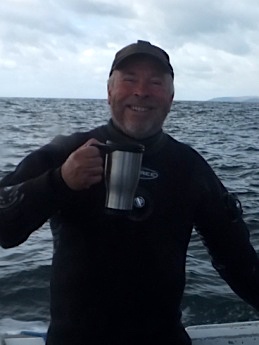