Where shall I start?

I suppose it all happened one day when I was so fed up because I couldn’t get the time off of work to go to the Maldives. A friend of mine who had been jesting about a Red Sea holiday for a few months just happened to come across the site of Red Sea Divers.  There it was – The Brothers Islands for Easter.  At first I thought maybe it was too advanced for me, then I thought what the hell.

Whilst I was waiting for the 12 weeks to pass before the holiday, I spent many hours surfing websites for info on the dive sites and the marine life of the Southern Red Sea, not to mention the dreaming of the nice warm water and abundant sea life and SHARKS.

I was rather apprehensive as well as I had read that there were fairly strong currents and that as the Brothers were in the middle of nowhere – no room for errors!

On the website of the Oyster, it said the minimum qualification was for an “advanced diver” with at least 50 logged dives.  Oh My God- I’m a Sports Diver not an Advanced Diver.  I phoned Red Sea Divers and he explained that it meant PADI advanced open water, and told me not to worry as most of my diving had been in UK anyhow and it shouldn’t be a problem.  What a relief I can tell you.

I had never been on a pure diving holiday before so I was sooooooo excited.  The people I work with were sick of me talking about it all the time.  They couldn’t wait for me to go just to get some peace and quiet.

As the D (departure/dive) day got closer, I managed to borrow a few books about the red sea dive sites.  When I saw diagrams of the sites and it said the depths and mentioned drop offs going to hundreds of metres, that’s when I started getting nervous.  Most of my diving before then had been to dive sites where you are on the bottom so you always know what the max depth is before the dive.  This was a completely different ball game as all the diving was wall diving. 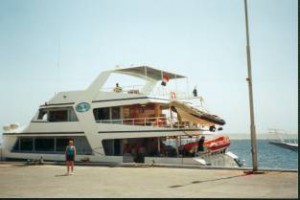 Well what can I say? Here you take a look and see!

It was huge. A lot bigger than all the other boats which were moored along side.  It was more like a ferry.  I had also seen pictures of the boat on the website before but it just didn’t do the boat justice. I walked down the gang plank- very gingerly – and my luggage met me there. I had just got on to the boat and was greeted by one of our dive guides, Miranda.  After a welcome drink (of orange juice- see I don’t have to booze it all the time) I was shown around.  Impressive! 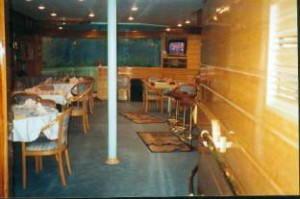 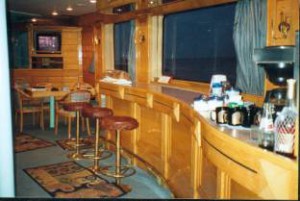 All cabins had en-suite facilities,  (mine even had a bath) and air conditioning.

As many drinks as you liked.  Cakes and nibbles all day.  The food was exceptional, in fact better than many hotels I have stayed in. 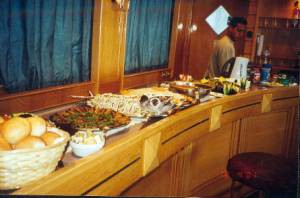 See what I mean?

The boat caters for 20 divers, but there were only 12 of us this week so we had tons of room.  The dive deck was well equipped.  My favourite piece of kit on that deck was the tumble drier.  After each dive, as soon as your wet suit was off, one of the crew would wrap a nice warm towel around your shoulders.   This for me was the icing on the cake of total spoiling.

On the first morning the engines started at 5.30am.  “Turn ‘em off I want my kip” There’s no way you could sleep, besides, I was too excited.  After 4 hours we reached Safaga.  The first dive was the Tobia V reef. This was a nice gentle dive to test everything.  I wore a 5m wetsuit but felt cold, so for the rest of the week, I was wearing a 3m shortie underneath.  The water temperature was 22 degrees, which is only a few degrees warmer than UK in the summer.

The only other warm water diving I had done was in Kenya.  I expected to see as much life as I did there, but there wasn’t, which did surprise me. However on the first dive I did see a huge octopus, which made up for my disappointment.  I was watching it for ages and admiring the way it moves over its prey and spreads its whole body out and then changes colour to match into the rock.  It really was quite fascinating.

After our second dive of the day, on Middle Reef, we all decided rather than doing a third, lets head for The Brothers as the sea was very calm.  The crossing took 6 hours so by the time we got there, we were all very glad for the engines to stop. The dive guide had to sort out the mooring so as we watched, we kept our eyes open for Silkies as he had told us the stories of how they like to be nosey and sometimes troublesome at this time of the day. Then it was time to fill our bellies.

The wakeup call in the morning was 6 am. I was even awake before then bursting with excitement.  I was also rather nervous. The brief was to drop in on the East side of the Island and head to the point with the current.  The dive guide said that we had to descend as quickly as possible to get below the surface current. I had done most of my diving with my club, where your training teaches you to meet on the surface and descend together.  This was a completely different ballgame. The surface swells were fairly big, with breakers over the reef.  On the way out to the dive site on the rib, I joked with other UK divers that going around Start Point will never be the same again.

I rolled back off the boat and tried to get down quickly.  I was letting air out of my stab but I just was not quick enough.  It was a struggle. I met my buddy at 5m and we headed for the reef.  We turned north and headed for the point (shark point).  The current was against us.  I was getting real tired as I struggled against the current. I was watching my air go down rather quickly.  I was even trying to swim against it, without actually getting anywhere.  We decided to turn back as it was just too strong for us. 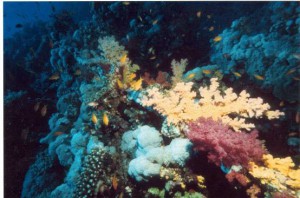 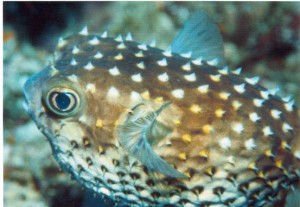 The third dive of the day, we made it.  We dropped in on the point.

We descended to about 20m and waited around for a while.  We saw white tip reef sharks and grey reef sharks.  The following day we saw hammerheads on our first dive.  They really were awesome. I had never seen one before so I was thrilled. 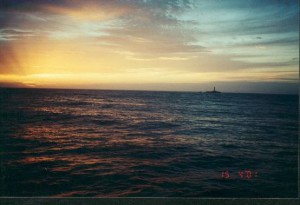 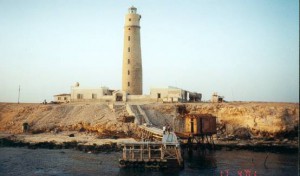 The life on the reef and the corals were outstanding!

After two days on Little Brother, it was time to move on to its Big Brother. 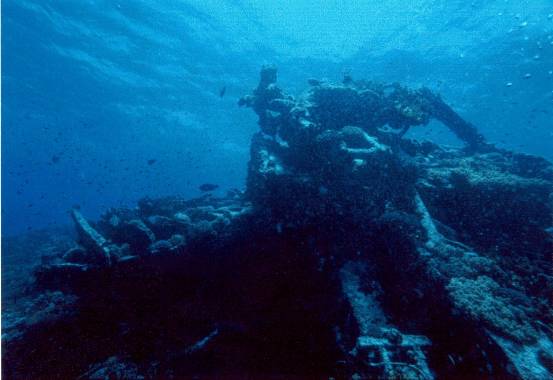 There are two wrecks on Big Brother.  The Aida II and the Numidia.  The Aida went down in 1957, and was military ship transporting troops from Alexandria. During the changing of the tides, the mooring procedure went wrong and the ship hit the reef.  The bow lies at 30m and the stern at 70m, and is covered in soft coral, which really is a lovely sight.

The Numidia lays not far from the Aida at depths starting from 9m to about 40m.  The spoked wagon wheels can be found on the north point of the reef.  This is a great place to do the safety stops at the end of the dive.  With the sun shining through and teaming of fish and profusion of soft corals really makes this a brilliant dive.  Not to mention that at about 25m, one can hold on to stop the current sweeping you around the reef and watch the sharks perform.

It just gets better! 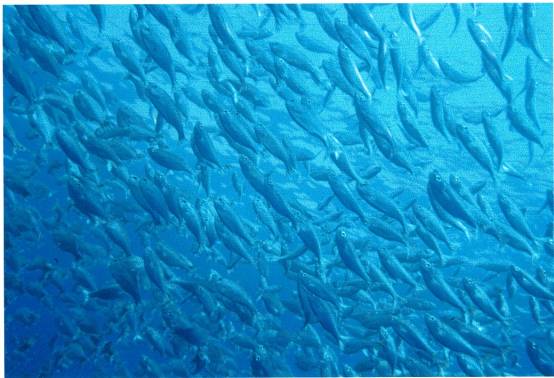 On the fifth day of diving, I was starting to get rather tired.  You know, the dive in the afternoon you wonder to yourself can you really be bothered.  Well I thought I would dive just in case there was something I might miss.  Boy was that a really good decision of mine!  This turned out to me one of my favourite dives of the holiday.  First of all I saw a huge moray out of its den just lying there with its teeth showing waiting for a bite.  Then, wow what a sighting.  I was at 15m and turned to look into the blue, and there it was.  The biggest shark I had seen so far, and not just any shark but the most brilliant shiny hammerhead.  I could see the whole underside as it swam and turned and went above me.  The sun was glistening off its body. It was so close I felt as though I could touch it.  I signalled to my buddy by doing the fin sign on top of my head then the other sign of hammer your head with your fist. The sign went down the line of divers like a Chinese whisper. At the end of the dive, there were a school of barracuda ambling by then we saw a large ball of fish, I think jacks.

After two days on Big Brother, it was time to make our way across the sea back towards Safaga.  The sail back was a bit rocky.  I couldn’t even leave my beer on the table because it kept falling over so I just had to drink it. 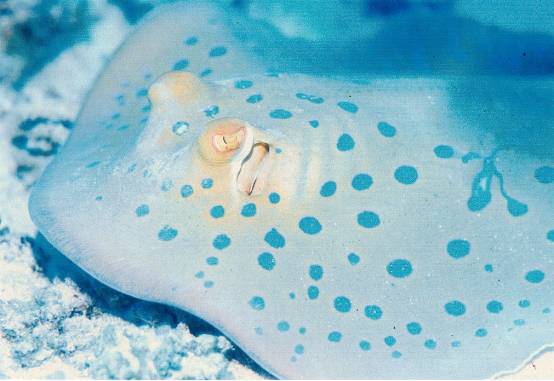 The last day diving was at Panorama reef.  We were planning to dive the Salem Express but due to the mist, we were unable to.  At our last dive briefing, I just happened to mention that the last dive was my 100th.  The dive guide then said that the 100th is the naked dive so we all had a laugh.  When I was getting on my wetsuit, very straight faced, he said to me “What do you think you are doing, it’s the naked dive!”.  The last dive was very enjoyable.  Towards the end of the dive I saw a large hump head wrasse.  It was swimming around so gracefully seeming not to be bothered by the divers.  I watched him for nearly 10 minutes before he decided he had had enough of performing and headed into the depths.  Panorama reef is considered to be one of the better reefs in the Red Sea.  After diving this reef, it made me realise what a really special place the Brothers Islands are.