To badly paraphrase the Black-Eyed Peas 🙂 but after a break of 4 months due to Lockdown #3 how could todays’ return to diving not be a good day by any measure?

Cromhall looking towards the beach – splendid!

It wasn’t about the dive site but more about the act of physically participating (rather than all those virtual activities so many of us have been engaging in) in a shared passion for something that brings a group of otherwise unconnected people from disparate backgrounds together for a common goal of experiencing something, a feeling if you will that few others will experience – the weightlessness & wonder of a different environment than the one we commonly move around in.

My excitement on the eve of the trip to our local quarry (selected In the interests of not travelling far or taking on anything too strenuous or taxing after such a long break) was akin to that of a child on Christmas eve and after a quick kit check to ensure that didn’t kibosh things (a corroded drysuit bag zip was quickly fixed with a needle & can of WD-40) it was early to bed for the morrow. 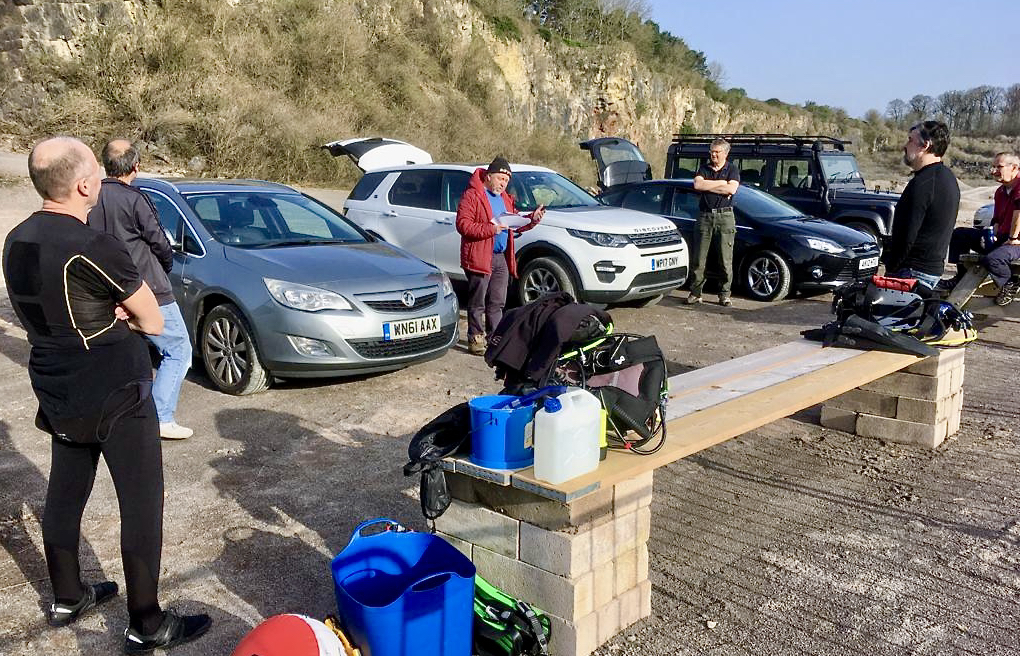 The day was certainly looking good from a weather perspective with a high of 19 degrees & sunshine and even better when we got a largish turnout (Sue, Tim, Geoff, Colin, Steve, Pete, Rob, David & myself) and better still when we saw the many improvements SWMA have done to the site since we were last allowed out – with astro-turf at the ticket booth between it & the large marquee and the ground between the steps & the beach flattened & equipped with many kitting up & picnic benches along with changing rooms we felt spoiled rotten! 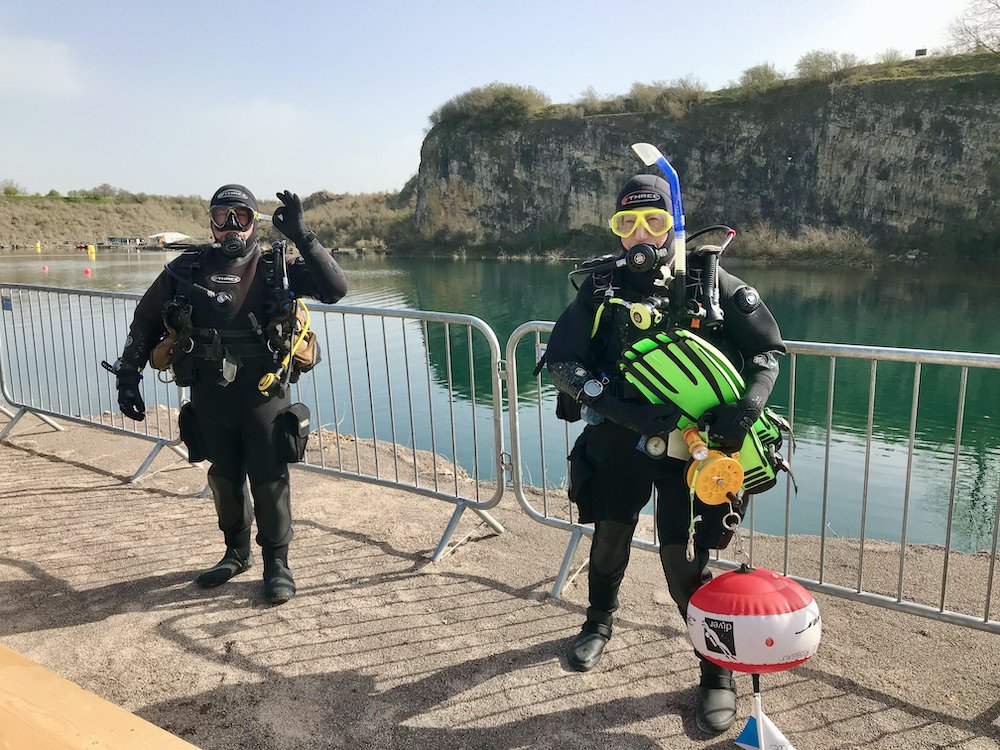 This years’ divers are wearing…

We pretty much had the place to ourselves other than two other small groups of divers that came and went and we engaged in a leisurely kitting up exercise while catching up with everyone.

From a practical point of view Colin was keen to try out his twinset, Steve wanted to get a handle on his new camera & computer, Sue & Tim wanted to look into the practicalities of simulated rescue breaths with regs in, I wanted to give my backplate/wing another outing and David wanted to check out a borrowed drysuit so plenty to be getting on with. 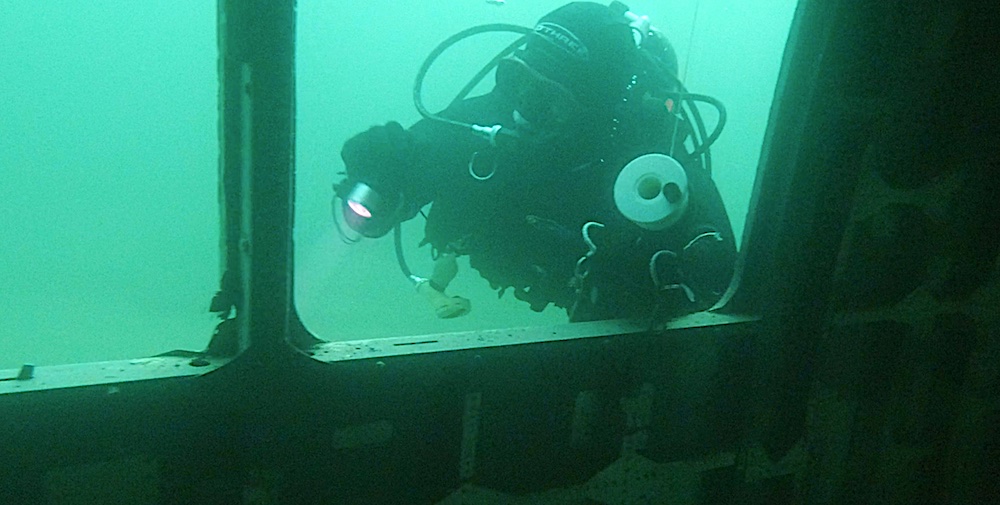 Whats in here then?

The sun continued to shine so we felt obliged to actually do some diving. Following a comprehensive pandemic flavoured dive briefing from Tim and with the choice of beach (most of which was under water with the level among the highest we’ve seen) or steps we opted for the steps with Geoff & I went in first, shortly followed by Colin, Pete & Steve with Sue & Tim providing shore cover. 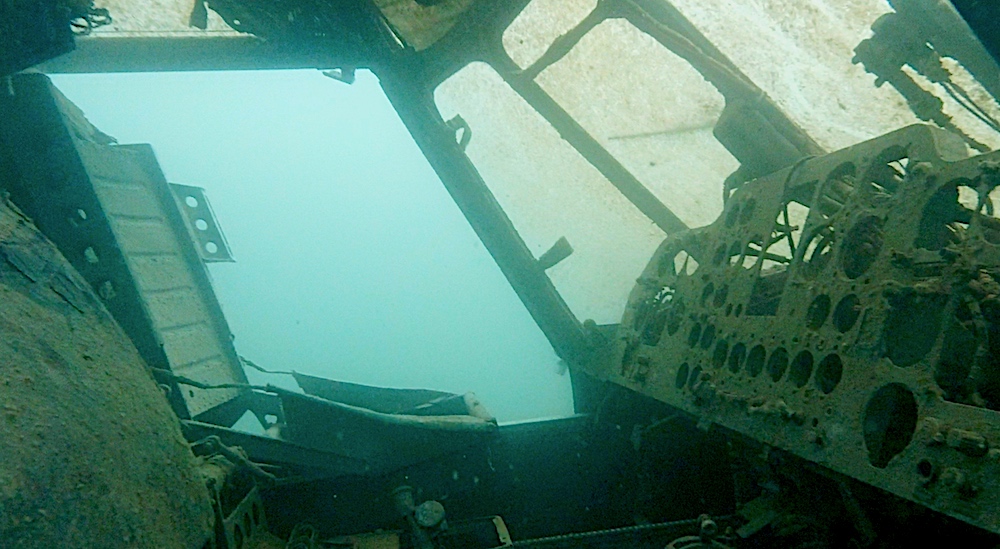 No wonder its in the quarry – there’s no pilot!

Geoff & I went down the shot to the boat & duly navigated the boat, plane, helicopter, sump, toilet, bath, rocks and shipping containers followed by a gradual ascent along the road to emerge at the beach. Viz was a decent 5 metres though a  little chilly on the hands at 7 degrees – makes you feel alive!. Not a lot of life to report (spotted some small mussels under the boat) but just being there and relaxing into the moment was all we really needed.

Once we had all emerged Sue & Tim went in & followed a similar route emerging at the beach 58 minutes later – Tim a little miffed on not getting his full hour. 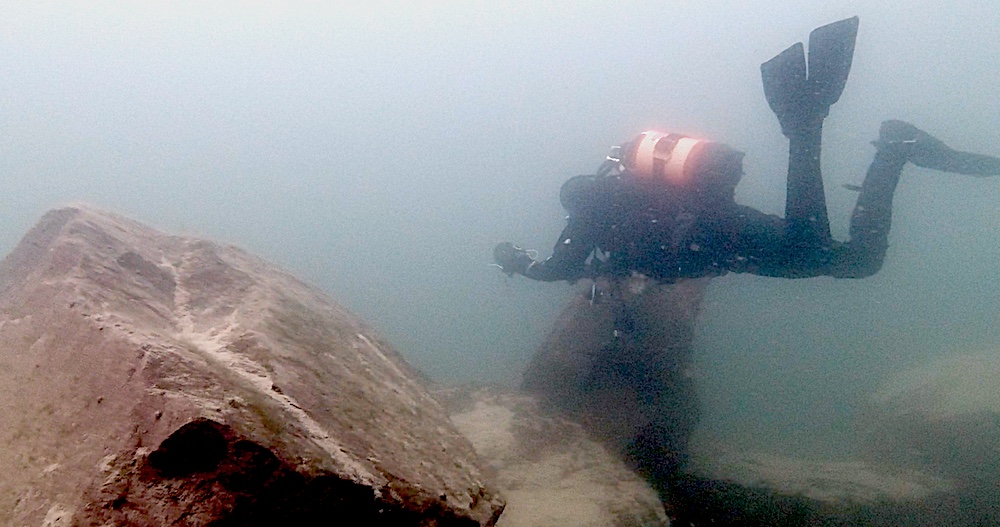 Further conversations. in the still glorious sunshine ensued during lunch on lockdown life, some serious foreign excursion plans for the future & Steves’ memories of working on Sea-king & Westland helicopters jogged by the sight of the one below the water. We bade Colin & Sue farewell before Pete joined Geoff & I for our 2nd while Rob & David followed after. 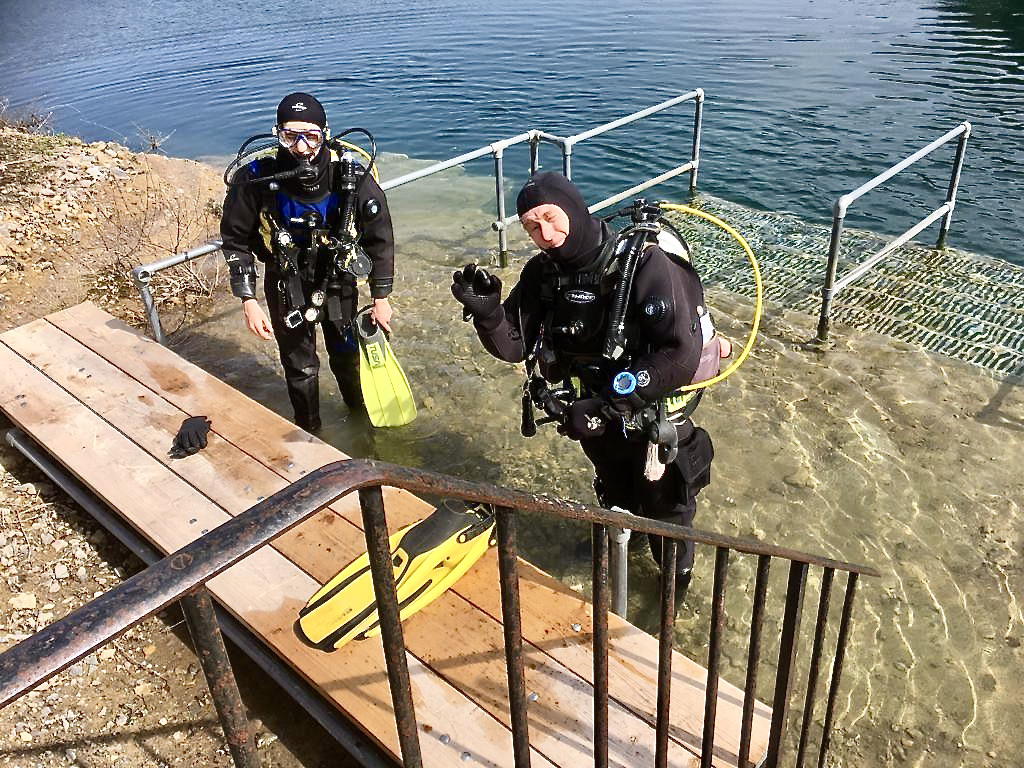 Rob & David on the steps ready for a dip

Our previous excursions (and those of other divers) had impacted the viz somewhat (down to 2 metres) as we followed a similar route, with Geoff noticing you could find the helicopter in the murk by almost following the planes’ wing and a bit of a dawdle in the (distinctly warmer) shallows to ensure we did over 1 hour (poor Tim 😉

After that it was a slow decamp, final catch up & suggestions & hints of trips to come both UK-based & eventually abroad.

We could not have asked for a more pressure-free day & it was great to get back in and see the old gang in the flesh!

I got a feeling we’ll be doing this again soon!