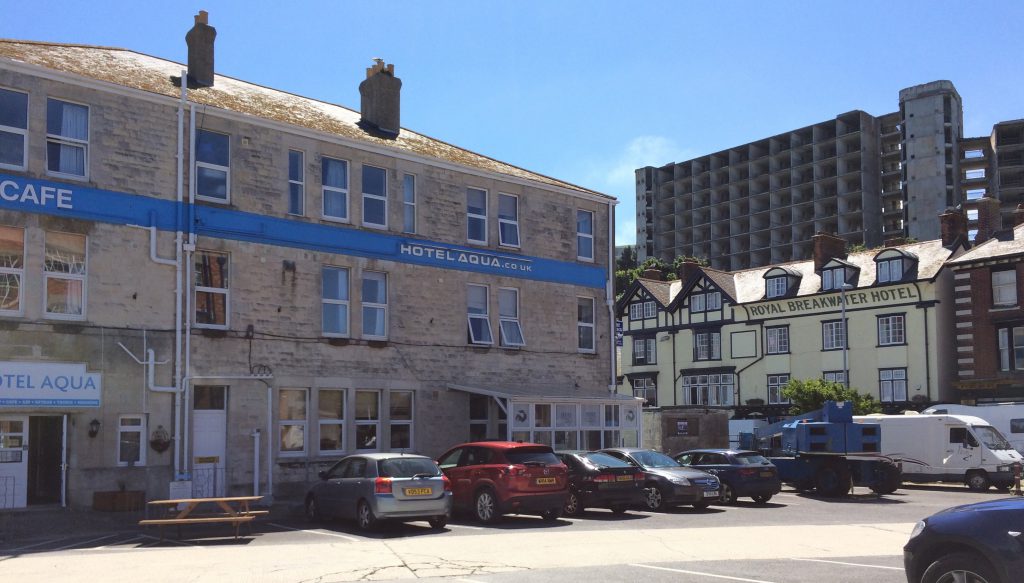 The Hotel Aqua – our very comfortable accommodation for the weekend

Saturday: Ropes off at 1pm it meant a leisurely drive down with a number of us arriving extra early to drop off cylinders for fills at the Marina, get parking permits & grab breakfast in the Aqua. Once the party was complete (Neil, Chris H, Chris L, Tim, Steve, Jon, Bob, Geoff & Kevin) we headed back to the Marina to meet the skipper, Nick & his deck-hand, Louise & load the boat; a process much eased by the provision of trolleys to cart our gear (ands wasn’t there a lot of it!) 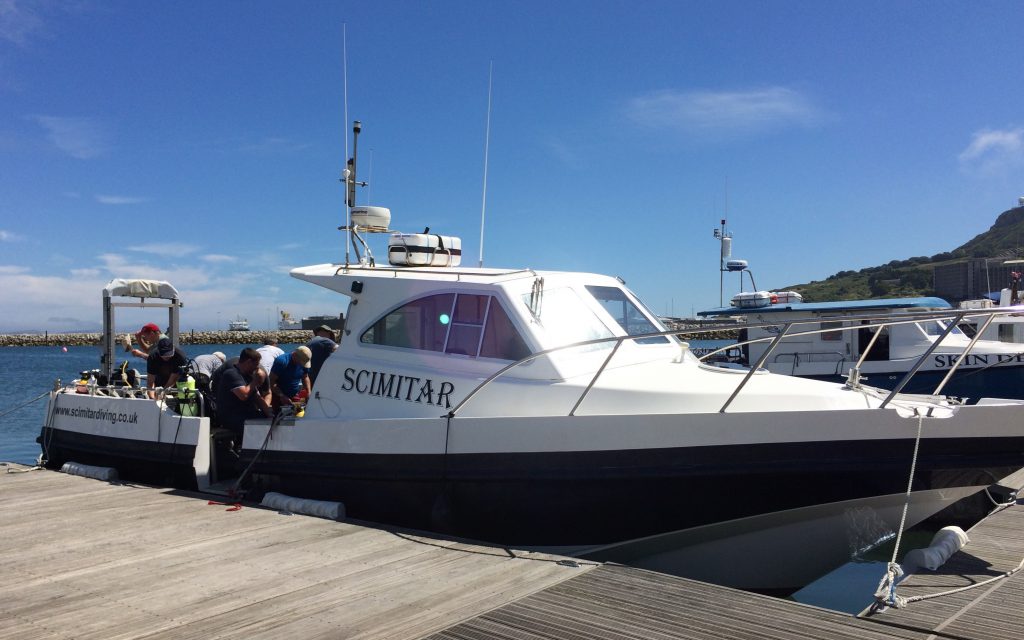 A security briefing from Nick & then we set off into the sun for a 90 minute transit to the first dive of the day.
Dive 1: Aeolian Sky – a 16,000 ton, 490x72ft Greek cargo/container ship, built in 1978 & sank November 4th, 1979 after a collision in #1 hold with a West German ship (MV Anna Knuppel). All the crew were saved. She lies on her port side oriented North-South at 30 metres,decks facing east and blown off bows 4 metres to the south. Most of her hull is still intact with the holds and surrounding area full of unopened containers of cargo. 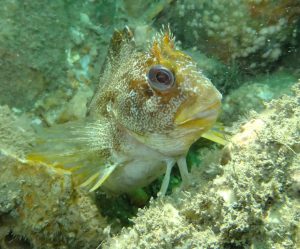 Chris H, Chris L & I dived this as a trio and although the viz wasn’t the best (4-5m – at its best it can be 15) as we landed we were directly on what looked like a huge mast and followed it to the wreck proper where we investigated the mounds of rusting metal. We found the sheer scale of it seriously impressive, though we didn’t attempt to penetrate into any of the cabins or companionways we only managed to cover a small amount of the total wreck while accompanied by plenty of inquisitive life and plenty more that wanted to hide from the diver onslaught.
Unfortunately we didn’t find any of the rumoured million pounds in Seychelles rupee bank notes in strongboxes in the sickbay near the funnel 🙁 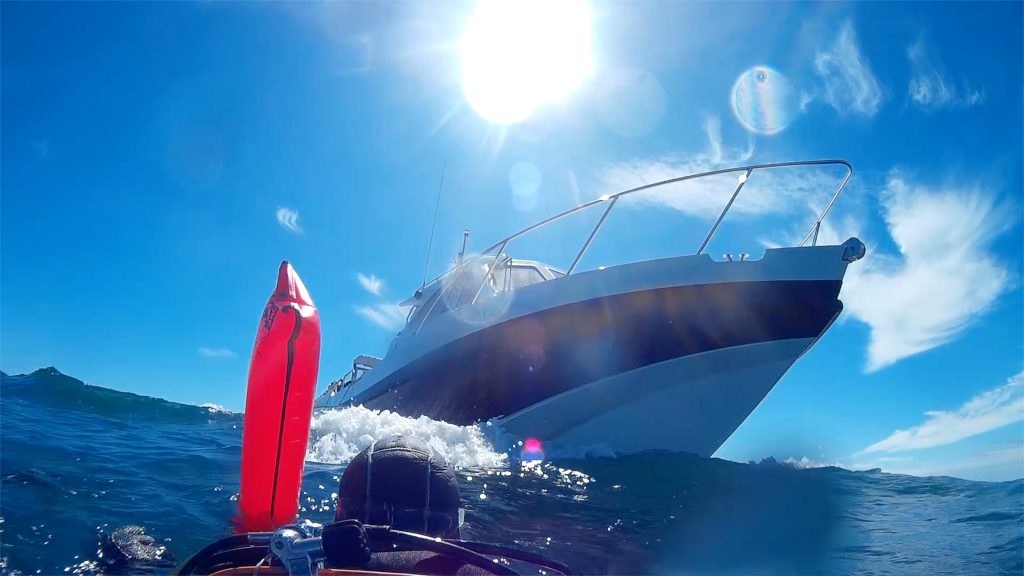 Lots more detail in a divernet article here
As we recovered from our exertions Louise offered hot drinks & copious pies & chocolate bars all round – the drinks & chocolate bars made frequent very welcome repeat visits.
Dive 2: Lulworth Banks – scallop hunt with Chris & Chris as my buddies! Landing at 20 metres in a cloud of queenies propelling themselves through the water with the strange opening & closing of their shells looking like a swarm of false teeth we found vis wasn’t too good but regardless Chris L made short work of the scallops attempts to hide & quickly filled a bag & sent it up with his DSMB for the skipper to retrieve. Drifting across a mostly sandy bottom we came across a large crab that might have complemented the scallops but were past it before we could get a firm grip. After that there wasn’t much else to see (apparently there is a rocky reef system down there, perhaps we’ll hit that next time) so we duly ascended – tomorrow’s’ tea sorted! 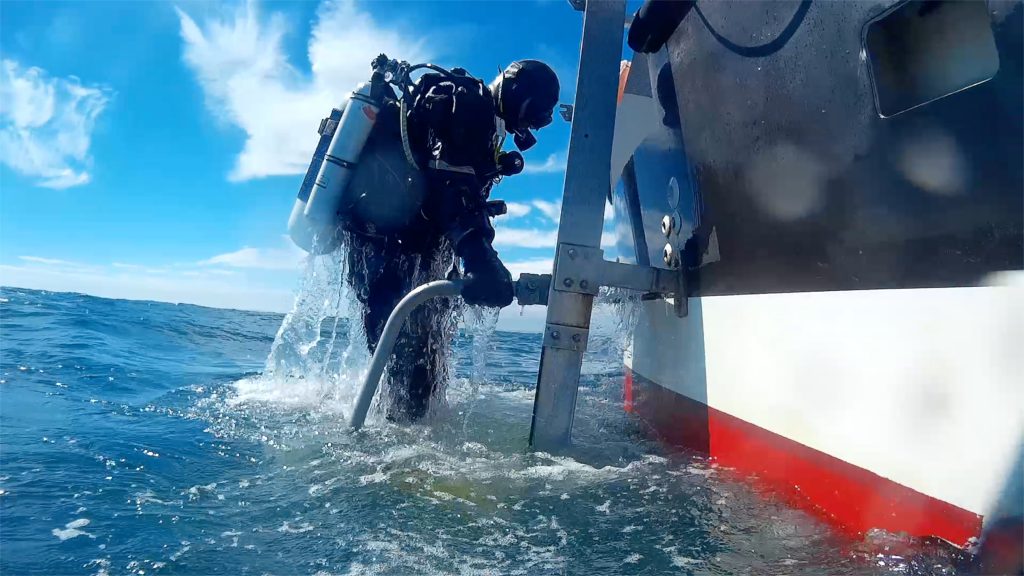 End of the drift

Our late start & thus late finish meant there was some concern we might not be able to get food but it turned out the Aqua was serving until 9 and the lovely lady behind the bar sorted our food & drinks & the chef delivered some very tasty grub.
Neil picked up the packed breakfasts for the next day (we were leaving before the kitchen was open to catch the tide for the M2) & we finished off the day with some ruminations of the current state of the UK before retiring for the night.
Sunday: Up at 6:30 we packed up & headed back to the boat for day 2! 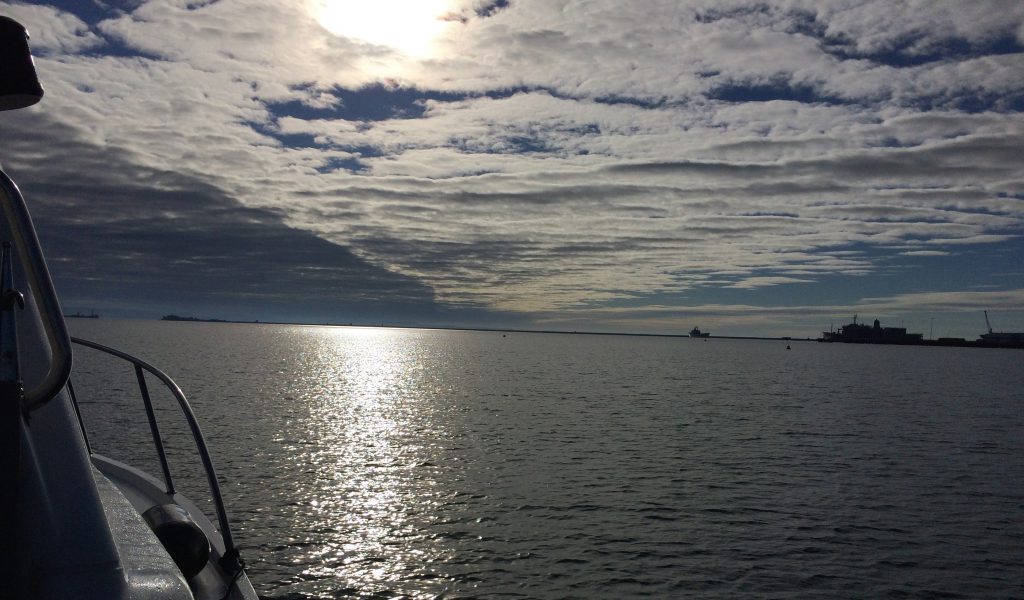 Dive 3: M2 – one of the UK’s most famous wrecks, the M2 was one of 4 ‘M’ class subs built by Vickers in 1916 (the 4th was scrapped before launch) and at 296x24ft is pretty compact; its unusual feature was the ability to launch a Parnall Peto spotter plane stored in a hangar in front of the conning tower. The M2 sank on 26th January 1932 with the loss of all (60) hands; the theory is she dived with the hangar doors open.
A deep one this (35 metres to the sea bed) so Nitrox (32%) in a 15 litre & a Pony were called for;. Worries the M2 would be swarming with dive boats on such an excellent day weather-wise were proven false as we pretty much had it to ourselves, which was nice. I have to say my initial thoughts on diving a submarine of a smooth sealed hull, perhaps with a conning tower – couldn’t be further from the truth! This wasn’t some super-streamlined hunter-killer from modern times, instead it is outfitted with a variety of interesting items: landing near the bow and heading back, the first we came across was a large single bollard, various deck fittings and some wicked looking spikes. Further back were the rails used to launch the plane, the decking beside them grated & this & the rails offering hiding places for various underwater denizens. Still further back and we came across the most unusual feature – an airplane hangar – which I duly explored (carefully as it is pretty silted up at the back). Above the hangar is the winch jib to recover the plane. We skipped the conning tower for now & headed towards the stern passing the platform for the 3 inch gun and on the way observing large shoals of curious wrasse & bib along with singular specimens of large size while the deck was covered with varieties of plumose anemones and sponges.  At the stern the prop has been salvaged but the hydroplanes are still there. Swimming up from the sea bed we worked our up and back to the conning tower (where another buddy pair apparently saw a conger), round it and then towards the bow again before we ran out of no-deco time & headed up.
Note: M2 photos may follow if video captures prove worthy, but there will be a video, eventually!
Lots more information in a fine divernet wreck tour article is here
A 90 minute interval allowed us to decompress a bit & to grab a pie, a hot drink & a bar of chocolate to get us ready for the next stage. During this Nick slowly headed for a location south of Chesil beach & just off Portland head for our final dive of the weekend
Dive 4: The SS James Fennell – A 215 ton, 123x22ft Strath class auxilliary patrol vessel built in 1918 and armed with a 12 pounder gun. She struck the rocks north of Blacknor Point on the 16th January 1920 in thick fog . All crew were rescued by local fishermen before she sank a few days later during an attempt to tow her off the rocks. 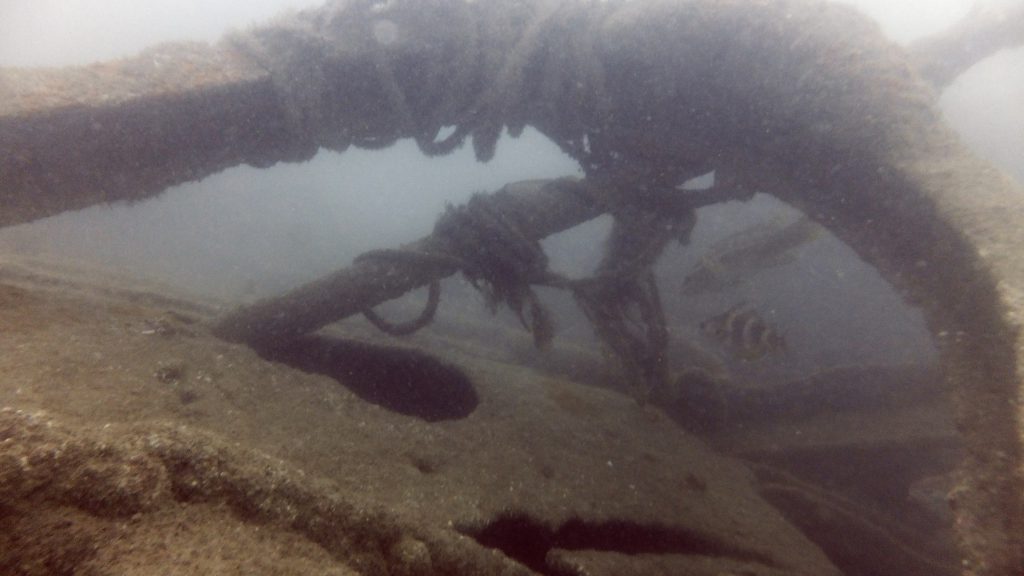 A relatively shallow dive (15m) to finish the day, the James Fennell is pretty smashed up and scattered across a rocky sea bed (the rocks having fallen from the cliffs above) but there was certainly lots of wreckage. The stern is mostly complete, while the sheer size of the boiler was most impressive as was the detail in the humongous triple-expansion engine just behind them.
The whole is surrounded by a profusion of marine life including wrasse, bib and pollack. After the wreck we explored the surrounding area & then Chris sent up a DSMB & we drifted for a while until I realised since I was on air & Chris on Nitrox my no-deco was getting smaller. We duly headed up 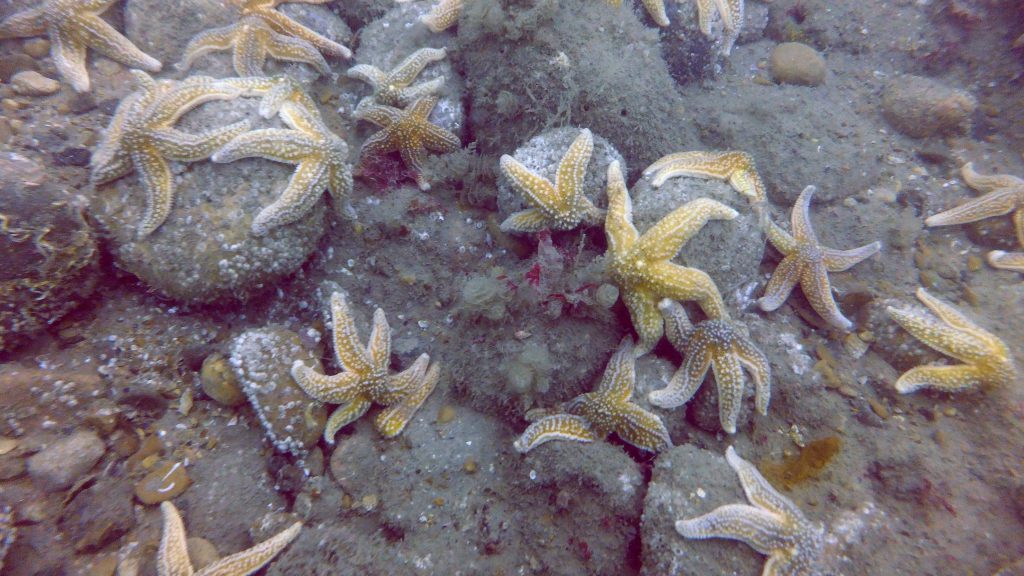 Profusion of life near the James Fennel 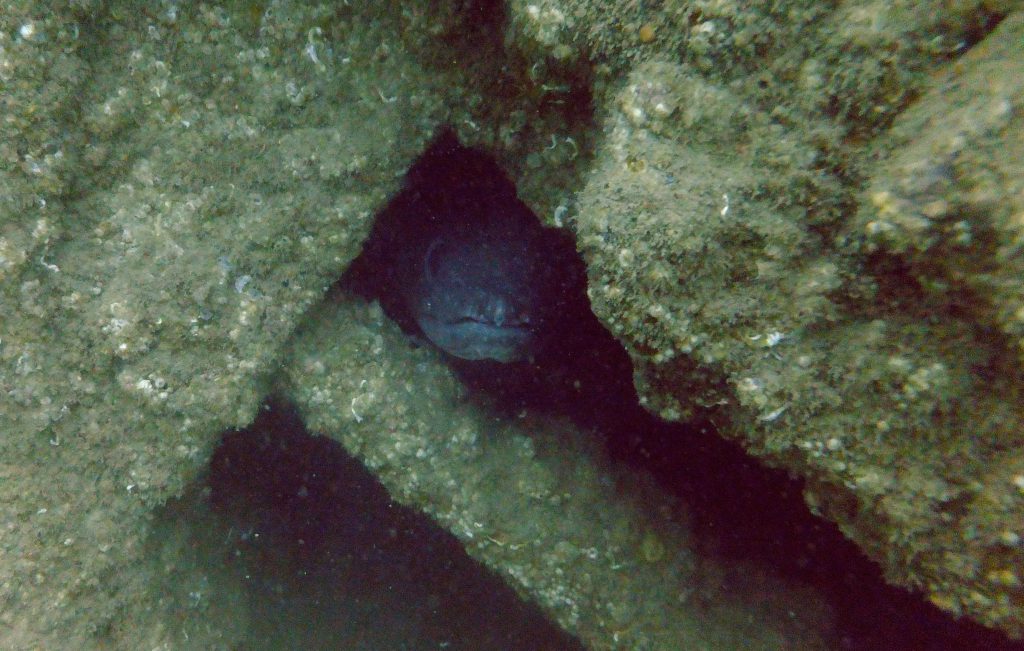 In summary
The good:
The not so good: 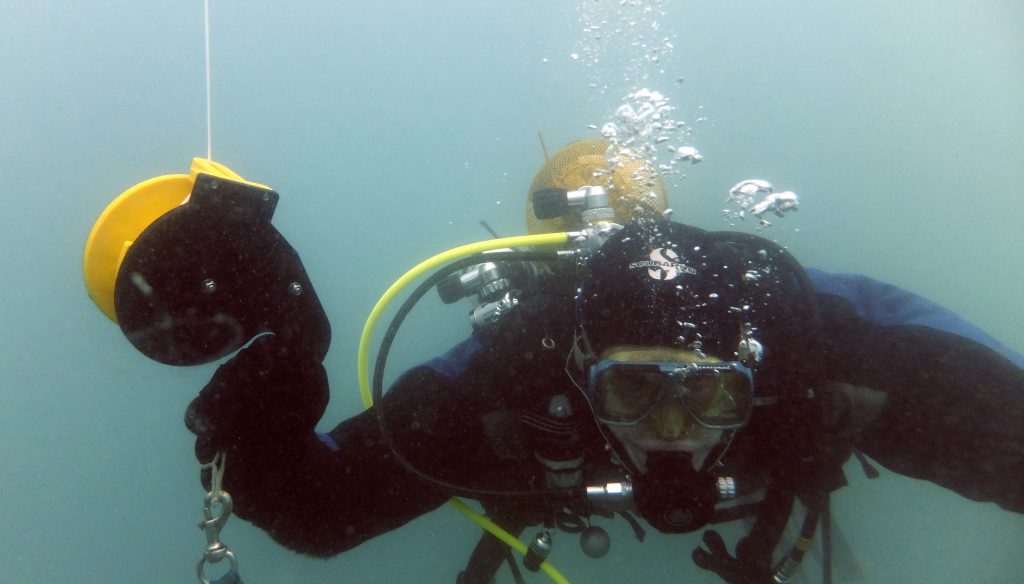 Our thanks for Neil for organising things & our excellent skipper Nick along with his able deck-hand Louise without whose enthusiasm things wouldn’t have been half as much fun – let’s do it all again!