Diving has been part of my family for quite a while. My Father started in 1966, and travelled along the coast, diving at various sites. When I was born, my Dad decided to give up, as now he had three young children to look after.

I learnt to swim when I was four As I grew older, I began to train three times a week. I did this for seven or eight years before I grew tired of it. When I was about nine, my Dad taught me to snorkel when we were abroad.

When my older sister Vicky was sixteen, she wanted to learn to dive. My Dad went along with her, but with A levels, then a job and a boyfriend she was too busy to carry on. My Dad carried on and I attended the club but just to snorkel.

Once I turned fourteen, the legal age to dive, I wanted to dive. I started properly in December 1998. Since then, I have had a number of lectures, practical lessons and even dived in the sea.

This project is about my experience of diving. I have also put together a photo album of pictures which relate to the writing, and some Red Sea photographs.

In our lectures, we don’t just learn how to dive, we also learn the physics and Science of Diving.

Don’t worry, it is not as bad as it sounds.

I belong to a club called the BS-AC. the British Sub-Aqua Club. The more you learn and the more experience you get, you go up in stages. I am at the moment a Club Diver. There are also:

Diving is quite an expensive sport. If you are just starting off, and you needed to buy the whole kit, it could come to about £1000. Here is some of the equipment that you might want.

Me, ready for one of my first dives.

Once you have got used to being underwater, you begin to do some exercises like taking your D.V. out of your mouth and clearing your mask. This is when you fill your mask with water and by tipping your head back and blowing out through your nose the water filters out. My favourite is when you take off all of your equipment and leave it on the bottom while you swim to the surface. Once you have regained your breath, you dive back down and put it all back on again.

Diving is a very friendly sport. You must always dive in pairs for safety reasons and for fun. The person you are diving with is called your Buddy.

My Diving club also have an Octopush team. Octopush is like underwater ice hockey. You have short sticks and a puck and must try and get it into your opponents goal. The team used to travel around Bristol, but lately there have not been enough people to do this.

There are also many social activities- like for example, bowling, barbecues and trips, and lots and lots more. Many wives, husbands and their children just come for a swim and to go on these trips.

Over May bank holiday, my Mum, Dad and 1 went down to Swanage in Dorset. We took woolly hats and soup, as it can be quite cold, diving in the cold sea and then coming out into cold air, but this weekend happened to be one of the hottest so far this year.

We were going to dive at Swanage Pier. Just after lunch, Dad and I put all of our equipment on. This made me quite hot as my suit was very difficult to get into and I was almost as red as the suit itself! Another reason why I couldn’t wait to get into the water.

We did our Buddy checks, which is when you check each other’s equipment to check that it is working, and so you know how to use it. We entered the water and put on our fins and swam along the surface for a while, so I could get used to the water temperature. I was quite surprised at this because I have heard a lot of tales saying that it was very cold even in dry suits. The water was not as cold as I expected it to be.

My Dad helped me to go down headfirst as I have never before. I saw a couple of crabs and a fish called a Wrass. We were underwater for twenty three minutes. The maximum depth was 3.5 metres just right for a first dive and the temperature was thirteen degrees Celsius. It was a very enjoyable dive.

On the second day we went to Kimmerage Bay in Kimmerage. There was a bit of a problem as there were double low tides which made where we wanted to dive quite shallow and we could not wait for the tide to come up as it didn’t that day. I was to dive with the Diving Officer. The deepest we managed to get was 1.6 metres, but at least the diving officer was able to assess my capabilities. We did some training. like some mask clearing. The visibility was better than at the pier.

On the third day we were back at Swanage Pier. Dad and I went for a dive in the morning. Dad had a bit of trouble with the S.M.B. It got caught on a fishing line. We swam to the surface and untangled it, but without either of us knowing a spare weight fell out from Dads pocket. (It was only there because when you do a shallow dive it makes you lighter). Dad was more buoyant, so it was hard work trying to keep on the bottom, so he used up his air quickly. We always leave some air in the cylinder so when it got to that point, we swam back to the shore. Luckily a member of our club found a weight. Dad was able to have it back as he could describe it as it was quite unique.

We filled the cylinders up at a near by filling station and got straight back into the water. We saw a Cuttle Fish. It changed colour as it swam away. When I swim along the bottom, I occasionally put my hands on the sea bed, and as I did one time, a crab bit me. It didn’t hurt as I had my gloves on and it wasn’t that hard. It did give me a fright though.

Overall I had a lovely dive on a lovely weekend. I was glad 1 was able to have my first dive with my Dad. 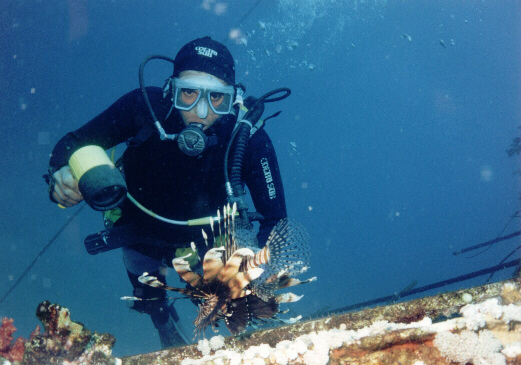 A Diver with a poisonous Lion Fish.

Interview with a Diver

How long have you been Scuba Diving?
I started in 1966, so altogether thirty-three years.
How did you get interested in Scuba Diving?
Watching early wildlife films in 1960 with Hans and Lotty Hass. They showed exotic coral reefs in glorious black and white. Also there was an adventure programme with Lloyd Bridges called Sea Hunt. It was exciting.
Out of all the dives you have done which was your favourite and why?
Diving in the Red Sea at a place called the Ras Muhammad. I read all about it when I was a young Lad. When I actually Dived it, it was excellent, there were large fish, coral reefs, and turtles. 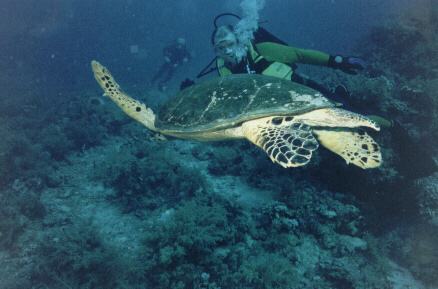 My Dad with a Turtle in the Red Sea.

What was your worst Dive and why?
We were going to dive on the Clubs own wreck called the Bretagne. It was a lovely sunny day, but when we got underwater, the visibility was only two feet. But on the good side, this makes you look a lot closer, and 1 found some little treasures
What does it feel like underwater?
It is very relaxing and peaceful. Sometimes a bit apprehensive, as you never know what you will find next. There is still gold being found on wrecks on the British Isles in under ten metres of water.
Have you ever got scared?
Not really, I have been apprehensive and did have a bit of a shock. This was when I disturbed a large Angler Fish to show a novice that I was diving with. As we swam away, something shook my leg. I thought that it was the Angler Fish biting my leg, but it was only the novice. He had lost his weight belt and needed some help.
What was your deepest Dive?
The Manacles in Cornwall. It was fifty- five metres deep. Although the depth gauges in those days weren’t very accurate. It could have been a bit deeper or a bit shallower. It was in perfect conditions for diving.
Have you ever had any problems with your equipment?
No, luckily.
Has the training changed over the years?
Yes, Diving is a growing sport, with new technology and new equipment. Liz has done one or two things in her training which I have never seen before. There are many commercial schools these days that can get you diving in days, not always safely. So the BS-AC, have tried to keep up with them. A boatman I was talking to once, said that he took one of them out, they were doing their first dive on a twenty-five metre wreck. There was one instructor which was going to take in eight novices. I have dived in a trio with two other experienced Divers, and that was difficult enough. It is nice to see more women and younger people getting involved with Diving.
I recommend diving to anyone, it is a very exciting sport. 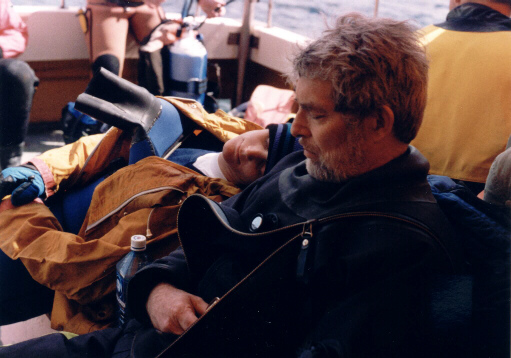 Thanks go to Stewart Butterfield, who I interviewed and who supplied the photographs.