by Cyril (The Old Man) Hucker.

27th May, 2004: Back in 1992/3 A few club members returned from the Red Sea with stories of a WW2 ship wreck, this particular wreck was more or less unknown at the time and had not had many divers visit it. The stories that were told, conjured up visions in my mind, hoping that one day I would be able to dive this wreck myself.

The wreck is the SS THISTLEGORM. It was waiting to navigate the Suez Canal loaded with supplies for the British 8th Army station in Egypt. This also fired up my imagination as my dad was a Desert Rat serving under General Montgomery. Unfortunately whilst at anchor it was spotted and bombed by a German Heinkel He 111.

As time went by more and more members were visiting the Red Sea staying on Liveboards, some on a regular basis. But as I’m married to a lady who panics when in the shower there was little hope of a trip to see this wreck, then in 1999 after working for the same company for 15 years I was made redundant, so the thoughts of ever seeing this wreck were getting slimmer and slimmer.

3 years 3 jobs and one more redundancy later employment settled down.

In 2003 husband and wife club members (both divers) and their 10 year old daughter visited Sham El Sheikh and stayed at Dreams Beach Resort and dived from day boats. On their return they and especially Sally was full of praises for the resort as she spent most of the two weeks in the resort with Emily while Terry was off diving. As all these tales of enjoyment were being told, the thought came to both my mind and my buddy, whos’ wife is also a dive widow, that there could be a chance of a trip. Then one evening during a quiet BBQ (after a hard days diving of course) it was suggested to our wives! As this was met with only a “maybe” Stewart and I considered the possibility of a RED SEA holiday. During further discussions about this holiday I suddenly realized that the 31st of May was not only our (my wife and I that is) Wedding Anniversary but it was our 35th which just happens to be A “Coral” anniversary, and as my birthday is one day before and Stewarts is the day before that, it was HOLIDAY ON!

Between the Xmas and New Year break and on the annual Xmas present “return for the right size” shopping trip, I called into the travel agents. Two hours and six telephone calls later there were ten divers and four non-divers booked from Gatwick to Sharm El Sheikh on the 27th of May 2004.

The next couple of months Harry (Big H) our Ex D.O. who now had lots of time on his hands volunteered to organize the diving for us. I had to make one stipulation that there was no diving (for me) on the 31st of May. We all finally agreed to a 3 day dive package with Dive Africa, that was to include local dive on the 29th (Stewarts birthday) the Thistelgorm on the 30th (Can I really be that lucky?) and the Dunraven on the 1st of June.

On the trip over we experienced no problems (1st sigh of relief). The Hotel / Resort lived up to expectations (2nd sigh of relief) all were happy. The first day some sat around the pool while Harry and the rest went to the dive shop to finalize the dive arrangements. They came back with the plan that we would do the local dive on the 29th at a site called the Near Gardens. The 30th we would dive the Dunraven (oh well the old man can’t have all his own way) with the Thistlegorm on the 1st of June, and that’s how it happened.

The 29th we dived the Near Gardens in the morning (I’m no longer a Red Sea virgin). The 1st birthday cake was consumed at lunch and in the afternoon we dived Ras Umm Sid. The 30th, we dived the Dunraven in the morning and the 2nd birthday cake consumed. After lunch we dived in the Ras Mohammed Coral Reserve, a site known as Shark Reef (I didn’t see any) [Ed – 1st Red Sea Rule – Shark Reef/Point/etc = No Sharks, EVER] +Yolanda reef (The Toilet wreck). Apparently, Jacques Cousteau once said that If he was to have one more dive before he died this would be the one. I wouldn’t disagree with him.

31st was our anniversary and my wife spent most of the day in the bathroom thanks to the old Delhi Belly. So the 1st of June arrived we were told it would be an early start. We thought they were joking when they told us to be ready to be picked up at 03:30. That’s right, 3:30 am. But who cares, this was the dive I had been waiting so long for.

We arrived at the harbour and it was still dark, it was a different boat then the one we had been using for the last two days, so the most important task was to find the Head and see how/if it worked, fortunately all was well. We left the harbour and settled down for the four hour trip out to the wreck. The wind was fresh. About an hour or so into the trip we saw the sun rise over the Sinai which was quite a sight.

As the morning went on the wind was increasing and there were rumors that we may not dive. We arrived at the wreck site and there were Liveaboards everywhere. One of the dive guides jumped into the water with the rope and after a short time we were tied onto the wreck and it was DIVE ON!! 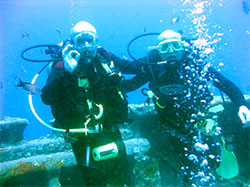 Cyril & Dave: Buddies on the Thistlegorm

Fortunately Harry had convinced our dive guide that Stewart, Dave and I had dived one or two wrecks in the past, so we didn’t have to follow the leader with him. So it was kit up quick, as the boat was rocking and rolling and get in quick, hit the shot line and go. Stewart 1st then me, followed by Dave, we all met at 6 meters and started to descend the shot line. As we did so, the wreck slowly came into vision WOW! I have never seen so much wreck in one go,in all the 30 odd years that I have been diving. As we descended I could see that the shot line was attached to the starboard side just forward of the no.4 hold, it was at this point that the aft section was blown off. This section is lying on its port side; we swam over the debris and onto the sea bed to the train which sits upright. We then went back to the stern where the anti-aircraft machine gun and all sorts of shells were scattered, around the back of the ship were the bronze prop and rudder can be viewed, then back to the forward section and then it was time to return past the crocodile fish and up the shot line and back on to the boat. 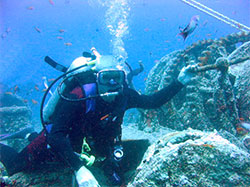 The old man, on an old boat.

The wind was still blowing and the boat was still rocking and rolling (ask Tony about it) so it was decided to delay lunch till after the second dive, so we changed cylinders re-kitted and back for part 2 of my dream. Again the three of us hit the water and met at six meters or there about, down the shot line and on to the wreck, forward through the companionway, more WOWs and a few photos, then into the holds. This was the bit I been waiting to see. It was certainly as I expected (Just a shame that some divers can not just take pictures). So it was in and out, up and down, trying to take in everything. A few more photos and it was time to make our way back to the old croc fish, up the line and back onto our boat.

I HAVE DIVED THE THISTLEGORM!

I’m told that I had a grin from ear to ear for the next couple of days, and why not? With help from my friends and a lot of support from my darling wife My Dreams Came True!!