You might have thought Brian and Harry had had more than enough helicopter rides for one year, but evidently not. Read Carols’ account of an unforgettable ‘day’ trip while on a club holiday in Marizion, Cornwall.

I suppose it all started on the Saturday when we arrived at Marizion. Tahnee collected the usual leaflets of the local attractions. In the collection, advertised was a day trip by helicopter to the Scilly Isles. It was rather expensive at £64 each, but because neither of us had been in a helicopter I thought why not. I then got talking to Julie and Harry and they were also keen. As the others arrived on the Sunday, they too were interested. Our expedition party now stood at 10.

The next thing was to book the tickets, which we did the next day, to St Mary’s. We had in our minds not to get up too early and get the 8.30 am flight. However, as there were 10 of us, the only flight available was the 7.30am one, which meant we had to be at the heliport at 7.00 in the morning!

On the Wednesday evening, we all set our alarms for 5.45am. I couldn’t believe I was actually going to get up that early when I was on my holiday. If it had been for diving then it goes without saying, but for a day trip – I thought we must be mad! The thing was, during the Wednesday night there was a storm. This was no ordinary storm, but it was the tail end of one of the hurricanes experienced in Florida. I was sat in my car (on the phone) with my tent being blown in all directions. Before I went to bed I made sure that all the pegs were in hard and all of the guy ropes tight. Harry gave me some earplugs to drown out the noise of the howling wind and hammering of the rain on the tent. I was led there all snug with my earplugs in, listening to the thunder and seeing the flashes of lightening expecting the tent to be ripped to shreds and to be blown away. Julie said in the morning that she was half expecting Tahnee and myself to be knocking on the caravan door saying “please, please let us in”. When my alarm call went off I couldn’t believe the tent was still around us. What a relief. 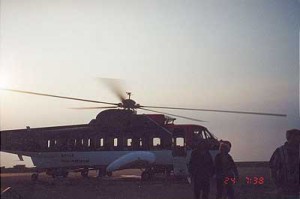 Up we got and set on our way to the heliport. The helicopter was a Sikorsky S61 which carries approx 30 passengers. As I have never been in one before, I was really looking forward to it, or dare I say excited! For the takeoff- the helicopter taxied to the other side of the field, then without any notice just took off. The ascent was so quick. I don’t know what I was expecting but it was so smooth, not like in a plane where you have to build up speed along the runway. We flew at an altitude of 1500ft. This was great because you see everything. The journey flew us over Lands End towards the Scilly’s. The flight took only 20 minutes to fly the 38 miles from Penzance to St Mary’s. Before we knew it, we were there, and landed at 7.50am.

We caught the bus into Hugh Town which is the main town. As it was so early in the morning, we decided to go to a local pub for breakfast. In this pub, there was an omen of how the day would unfold, but we did not realize this at the time. The omen was the waitress. She was a member of the ladies gig racing team. Both Julie and myself reminisced about our recent attempt at gig racing at the Bristol Harbour Regatta. We thought no wonder we didn’t win because neither of us could possibly have looked as miserable or as butch as her! Next year we should perhaps practice the certain glare when asked for anything. She definitely did not do mornings!

It was rather a dull day. Not much sun at all. After all feeling suitably refreshed, it was time to get down to serious business- shopping!! There were some lovely things to be bought, so of course we had to try ALL the shops, at least twice. We walked around Hugh Town and admired the quietness of the place- mind you it was still only 10am. We wandered to the other end of Hugh Town. On our way past Porthmellon Beach, we saw a group of divers entering the water. Harry talked to the guy in charge. As it turned out, the only diving on offer by him was a try-out, which we later found out from a leaflet cost £38!

We were all so thirsty by now that we had to do it again. What you may be asking- going to a pub of course! Some of the group couldn’t resist the beer, others had coffee and one even had a shot of brandy to warm her up. (Mind you it was nice and I was on holiday). 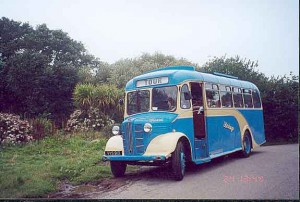 We later found a park to have our lunch before going on our bus tour of the Island. This was not any ordinary bus, but it was a…..

you can see from the photo, in excellent condition The driver was rather a character. He told us how he had come to St Mary’s on a day trip 25 years ago and ended up staying! The tour itself was very interesting, however, during the tour, we stopped at a local pottery. When we returned to the bus, the driver had been replaced by an imposter!

Whilst on the tour, the driver mentioned how sometimes the tourists get stranded due to weather conditions. They put them up in the social club and he said how they can eat there cheaply. This was a funny story, and we all had a good laugh! 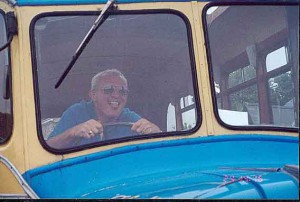 Following the tour, we were in need of refreshment AGAIN! We sampled the local hostelry, which was very nice. We were all now very mellow and jovial. Just time to go in the shops again and get the things we didn’t get earlier.

We were on the bus now saying what a lovely day it had been, all in high spirits and looking forward to our pub dinner on the way back to the campsite.

On arrival at the airport, it was very busy with all the seats taken. H then started to wind me up by saying that the flights were delayed and maybe cancelled due to the low mist. But he was serious. Julie had heard someone trying to get a room for the night at the sum of £65 each. This was a great way of sobering up! Julie started to call B&B’s to get somewhere to stay, and managed to get two rooms. All the places I called were full. This was no longer funny and we were all getting rather stressed at the possibility of having to sleep at the airport as there were no rooms left at the inn.

After pressure on the desk attendant we got another three rooms. What a relief! We left the airport at 8pm to go to our relevant accommodation. Now the jokes started about no clean knickers and toothbrushes. We arranged to meet up as soon as we had checked in as by now we were all very hungry.

There was a supermarket still open which we managed to buy some toiletries. They even ran out of toothbrushes, so we could only buy enough to share! Just as we were at the checkouts, they found some more. Great-our own toothbrush. It’s funny what things you appreciate!

We went to the first pub we found and had an absolutely excellent meal. The beer was going down a treat as well. Harry & Julie, Brian and Denise walked Tahnee and myself back to our B&B as I couldn’t find the way home, even though it was only around the corner from where we ate.

Tahnee and I had to share a double bed. The bed was great after sleeping on camp beds. The couple who ran the place were very friendly. They even waved us off on the bus in the morning.

We eventually got back to Blighty about 9.00 the next morning. Looking back, we really enjoyed ourselves and is something to remember for a long time. However, there is a moral in the tale and that is to always pack a clean pair of knickers and a toothbrush because you never know when you may need them!

Thanks to all who came to Cornwall for a really enjoyable holiday.

As you can well imagine as the news of the unfortunate ten broke back in Bristol (thanks to a phone call from Harry) it provoked a very charitable and sympathetic response………..NOT!

Some of the helpful suggestions included,

anyway, this is where the intrepid ten first became nick named,

One of the Scilly Bod’s was so moved by the whole affair he’s broken out into verse. Pam Ayres watch out!

Strong winds 4/5 there’s no chance of a dive, so we spend loads of
money on a Helicopter ride.
Off to the Scilly’s we will hover thinking that there will be no
bovver.
On the island we have such fun, on an old bus organized by
Miss Bunn. (Carol Shepard to you and me)
We shop and drink and shop some more until its time to travel,
from the Heliport tarmac and gravel.
To our surprise fog has descended and all the Hekalopters have
been grounded.
With the Old Faithful Mobile Julie dials, but there’s very few
beds for miles and miles.
Persevere our Julie does, until there is beds for the tired ten.
Off to the shops again we roam, to find the necessary tools, poor
Old Julie has no clean Drawers!
The Bishop and Rock it does beckon, a few beers and a steak I
reckon.
Time Gentlemen Please! The landlord calls, BOY Am I glad I
don’t have to listen to Harry’s snores.
Up in the morning the old crocks crow, off to the Heliport again
we go.
Back to Penzance we will hover THANK GOD this time there
was no bother.
Yours Sinscilly,