June 26th – July 2nd: At the beginning, it looked like it would be another largish (10-12) group of divers/non-divers but in the end we were only 4 but the four of us (2 divers /2 non-divers) had a very good holiday.

I had arranged accommodation (an apartment) and the diving through a dive company called TROGIR diving and they also did the transfers from airport/rail station.  Neil came by train as part of a longer European sojourn while Jan & I came by easyjet to Split for 10 days. 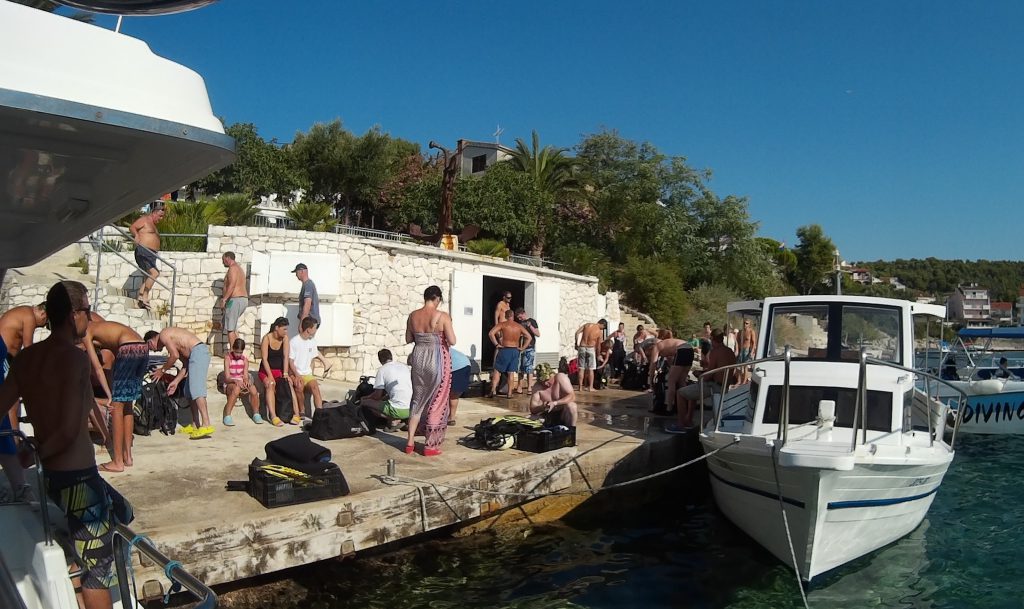 We had a week together (the 4 of us) with diving most days for Neil and I and Jan & Kath did walking, touristing and swimming and one day they came on the dive boat for the day to do some snorkelling.

The diving was good but I think I have been spoiled by the Maldives and some UK diving i.e. the Isle of Man and the views were a bit more bland than sometimes we get in UK waters.  However, there were some good dives and the aspect that was particularly pleasing to me was that the dive guides were willing for Neil & I to “do our own thing”.

One thing that has driven me mad about so many dive outfits is the “rush” to go out the furthest distance they can and race back “covering” as much territory as possible. I realise that many guides know where there are interesting beasties but sometimes it is better to take it a bit slower.  It is one reason I particularly like diving with club members.

I distinctly remember shortly after I got Ocean (Diver – the first BSAC qualification) and Jan & I went to Australia and had a 3 day liveaboard on the Great Barrier Reef.  The night before the trip, we went to a “Reef Teach-In” and a marine biologist and diver said that when all the divers jump in, the beasties will disappear and they continue to disappear all along  the mass group’s route  so that is why you will often see me at the back of any of these groups lingering and looking behind me – that’s where the beasties will be coming out again.  AND DON’T THINK YOU CAN GO  SLOWER THAN ME!!