Chris & I headed south early Friday afternoon & a relatively event-free four hours later (despite the strong winds forecast) we pulled up at the Prince of Wales pub in Newtown for opening time!  We were advised to pitch in the lee of the large bank at the top of the field for shelter from the wind, which was to increase overnight!).

Claire & Luke arrived as we put the finishing touches to our nights’ accommodation & then there was nothing for it but to go back in the pub 🙂 Colin & Jo arrived shortly thereafter & we sorted world peace, drank precious Cornish ale & cider and ate good food until the sun went down & it was time to beat the imminent rain to the tent for bed.

The wind certainly tried its’ best during the night but opening the tent flap confirmed I wasn’t in a Wizard of Oz remake & a green, slightly damp Cornish field greeted me. The wind kept up but it was time to get the party started!

Tim & Geoff would be arriving at the Dive Centre around 10 so the rest of us formed a convoy & headed down a very scenic (& long) google maps route to Porthkerris Divers, but we got there!

With an 11:40 kick off we had plenty of time to get our cylinders in for fills & then a refreshing tea from the cafe along with a variety of breakfast choices. Before kitting up I was hailed by a fellow diver who turned out to be an ex-work colleague, not only that but he was here with his mate: Davey Jones! (you can’t make this stuff up!)

Claire instructed her lackey (hubby Luke), who was not diving due to an eye-infection, in the art of ferrying her kit (to be fair so did some of the rest of us!) & Jo planned to scout about the area and generally chill-out. 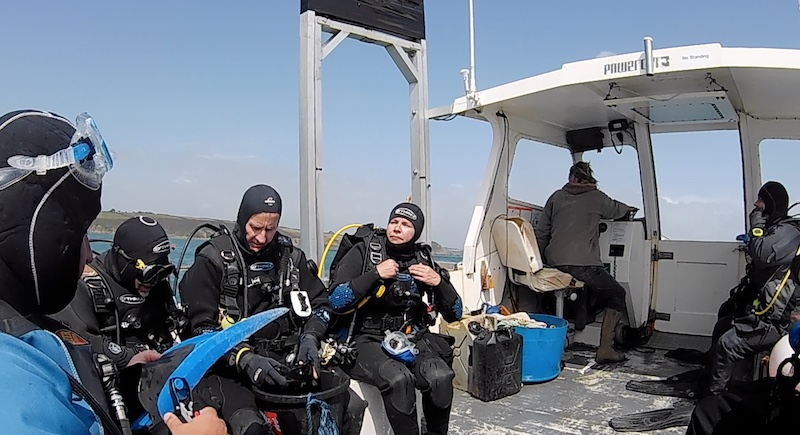 Dave steers us to our next appointment 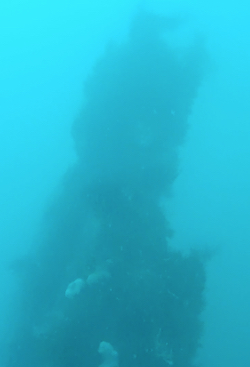 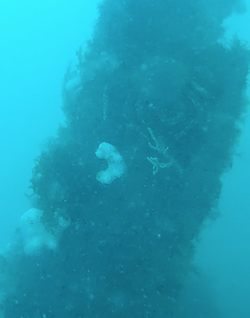 The Celtic Kitten beached herself & disgorged the previous group of divers to allow us to board & then our skipper, Dave offered us the choice of  a drift on the Manacles or the Volnay – we’d be sticking close to land with the wind as it was, we opted for the Volnay – none of the sites is more than a 10 minute or so trip. Dave dropped the shot on the boilers & Geoff & Tim strode in followed swiftly by Claire & Colin and then Chris & I.

Visibility, a milky 2-3 metres during the 20 metre descent didn’t improve significantly which meant close-up wildlife & wreck appreciation. The Volnay is fairly flat so our dive profile would pretty much match the idealised dive table view which made time estimates easy. 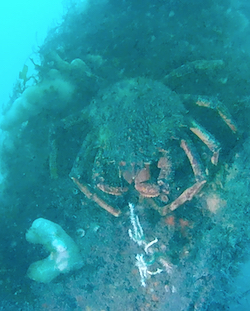 Our explorations took us over large quantities of plate & spars scattered amongst rocky outcrops. Despite the low visibility Chris almost immediately found what he later learned to be a timing cap from a shell

Much of the wreck & rocks were liberally covered with white dead mans’ fingers and significant numbers of filigree-like pink sea fans – a relatively rare Cnidarian but plentiful on the English south coast.

The plentiful crayfish we found seemed particularly shy as mostly all I saw were lengthy tentacles testing the water. A small goby shot across the sea bed as I approached & elsewhere a velvet swimming crab scuttled under the hull ribs. Various spider-crab specimens appeared, one of whom had clearly been in the wars – lacking a few legs. 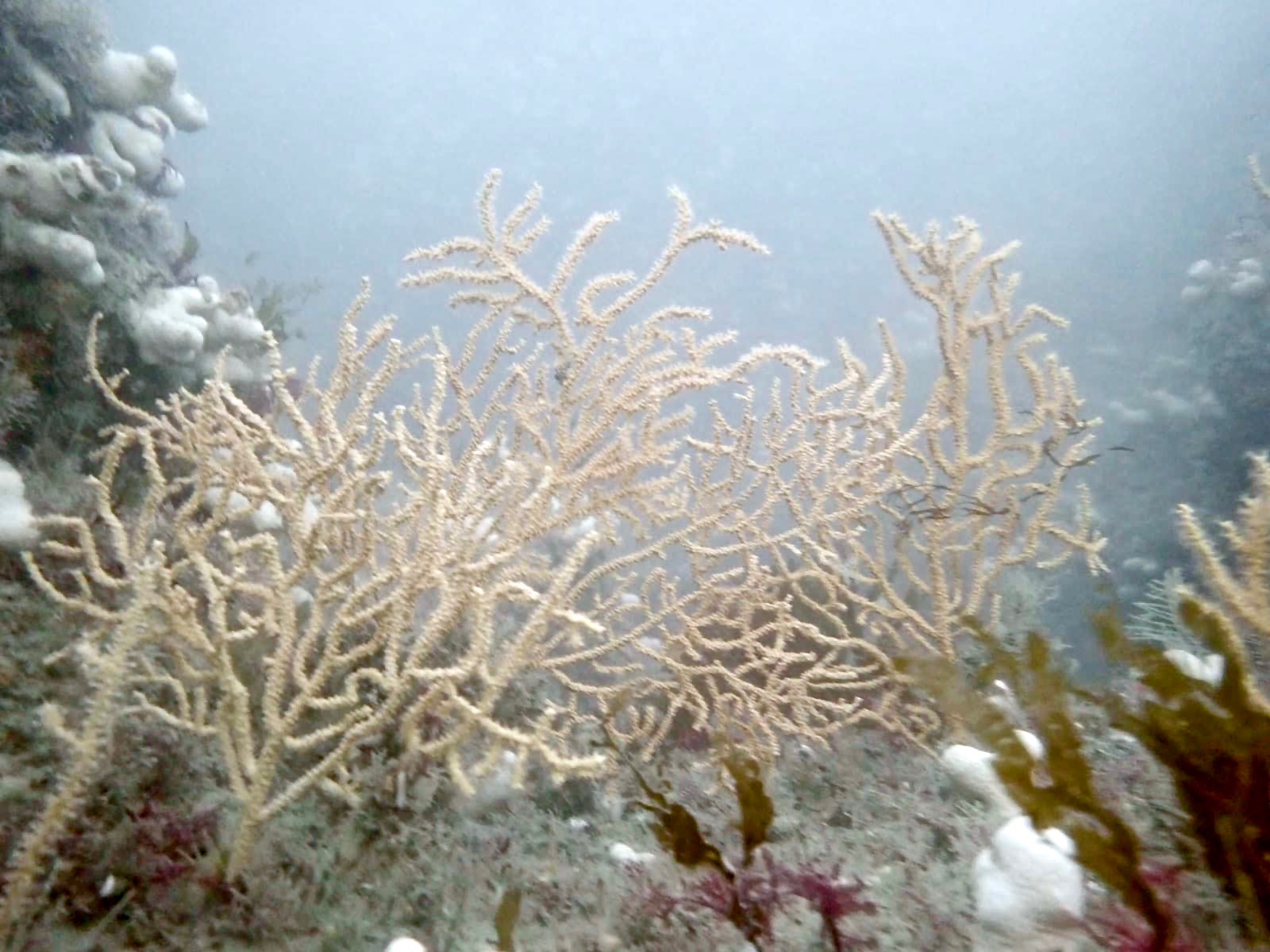 Chris spotted a number of prawns hiding in the gloom and large Ballan Wrasse weaved among the rocks & kelp while female cuckoo wrasse made their escape. 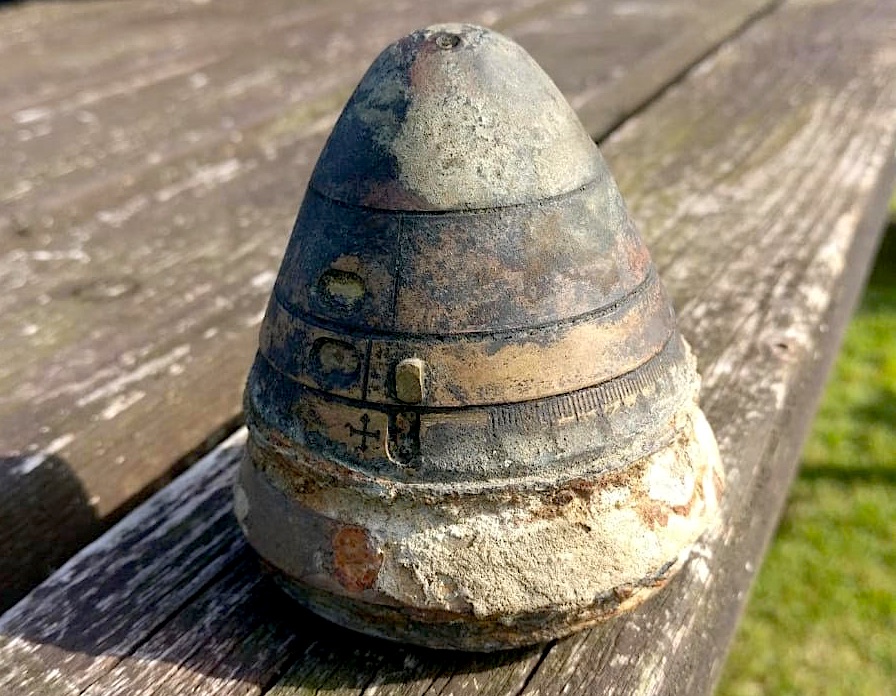 On our return to the Kitten Tim tried not to be too jealous of Chris’ timing mechanism (he’d been looked for the same on his previous Volnay dives but never been successful) and announced he’d found some lead shot, but then so had Chris!

Clearly it was time for another cuppa & some food so we popped our cylinders in for fills & headed for the cafe before reassembling for the next dive.

Unfortunately the swell had increased & the Kitten had a hard time disgorging the previous group of divers & after an abortive attempt to swim out to the boat we decided to call it a day & look forward to the morrow whose forecast was much better.

A leisurely clean-up & return to the campsite to find our tents still standing – whew! Then to our usual table for an enjoyable debrief & tale swapping evening before early to bed.

An early start (8:40) today so we arranged to collect the tents later (when they had dried) & got down to Porthkerris for a cuppa before the dive.

Dave suggested diving in the lee of the rock to avoid any tidal flow (which can be significant on springs & only slightly less so on neaps) for a nice relaxing scenic dive on the reef – diving on the Manacles is not for the inexperienced. 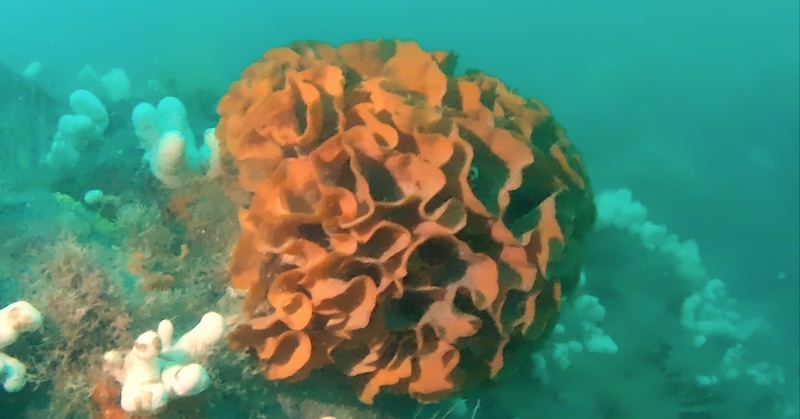 The landscape that greeted us below in slightly improved visibility (3 metres) was a mixture of rocky reef covered in Maerl (red seaweed) and kelp hiding sea cucumbers, sea stars and anemones along with the occasional cauliflower-like Ross & pink sea fan – I even spotted some slightly rarer red dead mans’ fingers. Vertical rock faces challenged us with narrow passages between, clustered with uncountable jewel anemones & white dead mans’ fingers and scattered urchins. 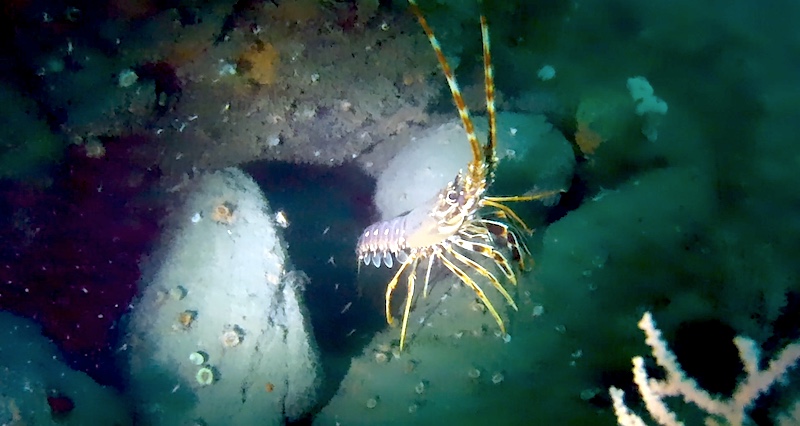 Our companions were male & female Cuckoo & Ballan wrasse & tucked in here and there was the odd crayfish ‘waving’ as we passed by. 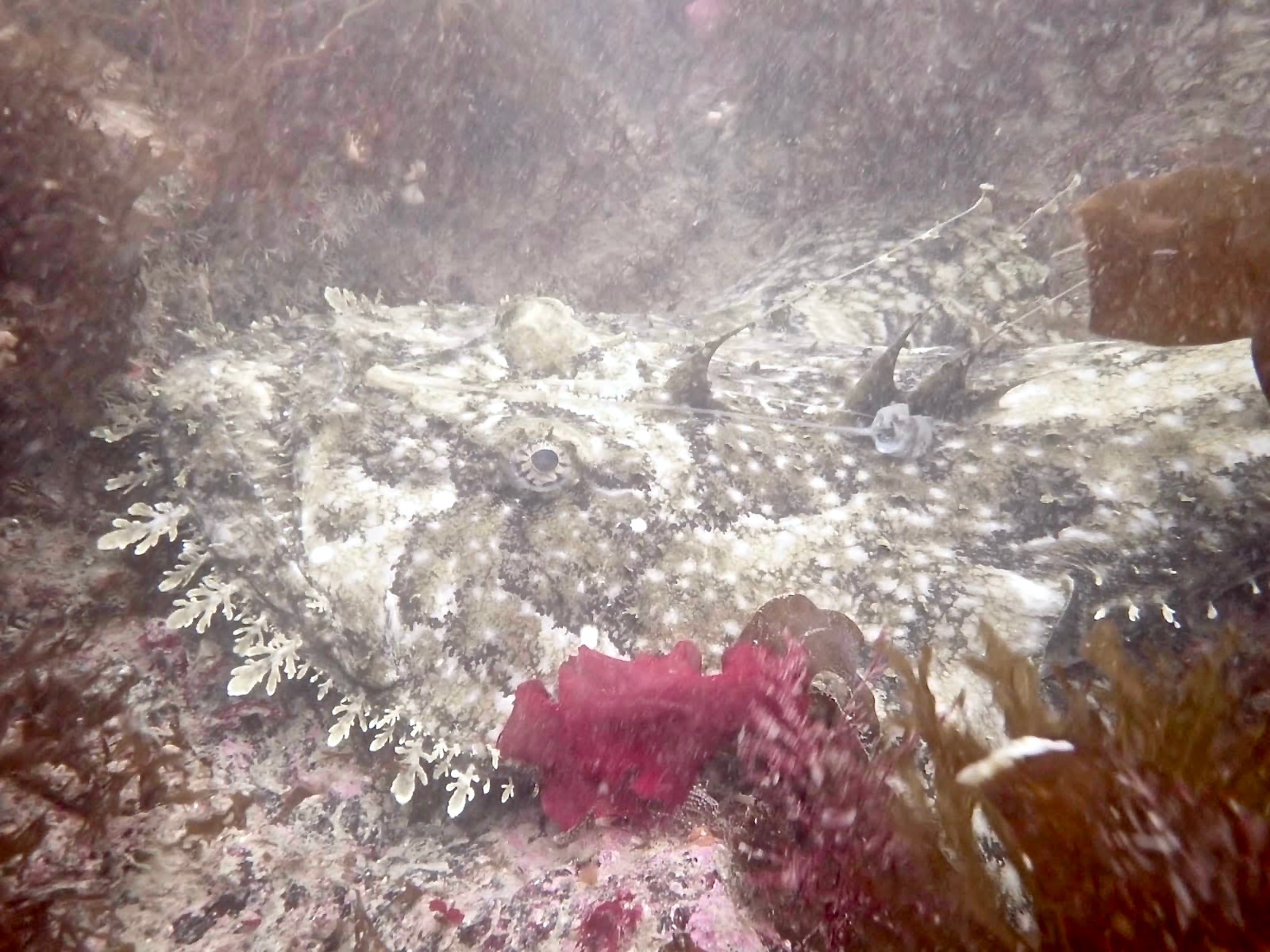 On returning to the Kitten Geoff told us about finding the biggest Angler fish he had ever seen & even had some photos to prove it! 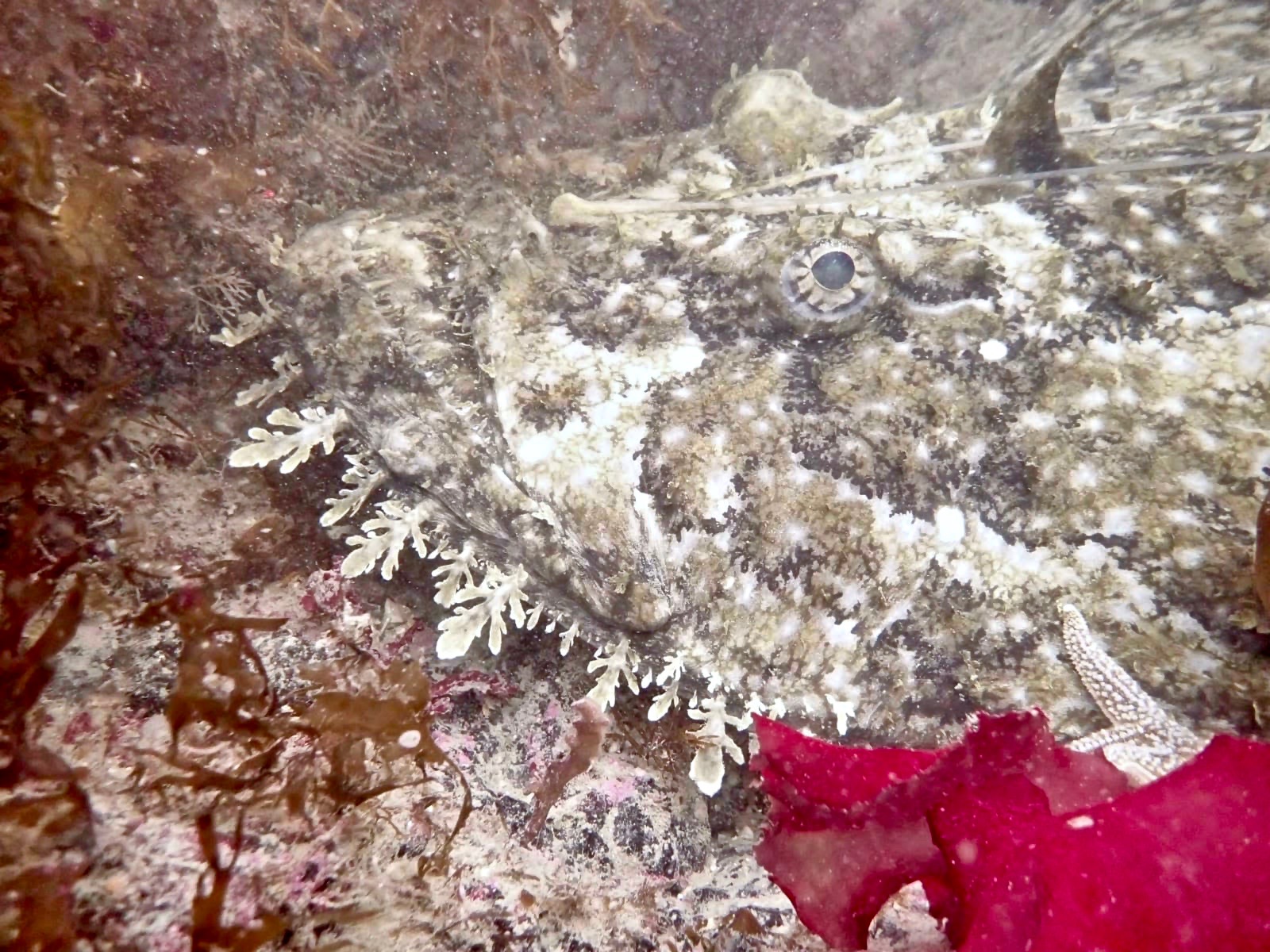 Eye Eye – Ready for my close-up

Chris reels us in

Then it was time for a break and an early brunch – a tasty bacon sandwich for myself, a burger for Chris & various other options all washed down by a nice mug of tea.

Kit reassembled and cylinders refilled we headed out again – some preferred a less deep reef for this one & others a wreck – Dave pleased both camps by dropping the shot on the boilers of the Mohegan & indicating towards the bow you would get shallower & eventually reach the reef (& indeed the rock she struck) while towards the stern you’d get more depth.

Tim & Geoff went in first followed by Claire, Colin & myself (Chris had a leak in his drysuit & opted to search for that, polish his timer & tend the cars).

Reaching the wreck we found the visibility to be marginally improved again (at 4 metres), moved the shot so it wouldn’t snag on retrieval & then proceeded to survey the vast quantity of spars & plate that made up the remains. At 475 feet in length & 52 wide & mostly broken up the wreckage occupies a largish area, at the stern is what could be the remains of the propeller shaft and forward of that the engine & then the 3 boilers. 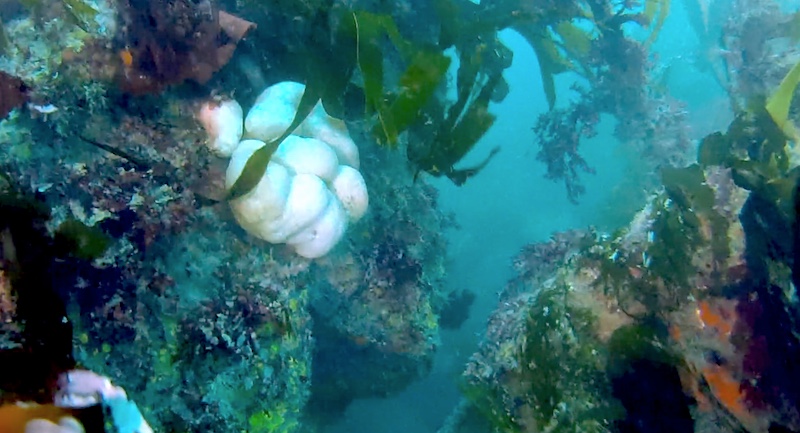 We chose to move towards the bow exploring as we went & reaching the edge of the wreckage we moved on to the reef where we swam over & among kelp, between huge rock walls covered with jewel anemones of various colours while male cuckoo wrasse cheekily entertained us along with many large Ballan wrasse weaving lazily among the kelp, boulders & seaweed.

Sea cucumbers were scattered across the sea bed while urchins clung to many rock faces along with clusters of dead mans fingers. 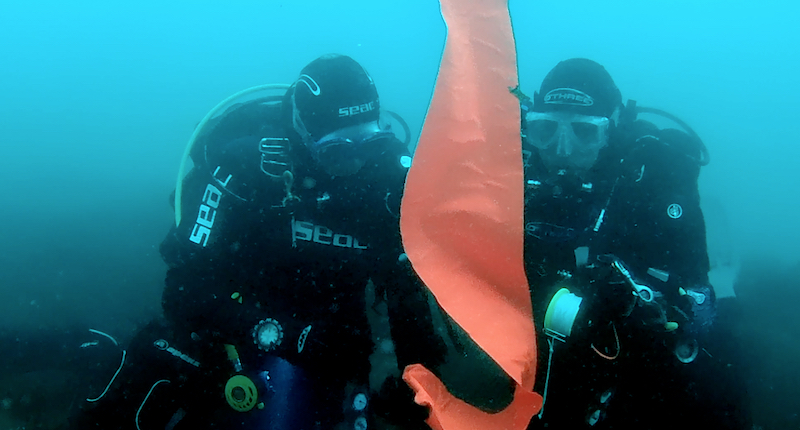 Following the main line of the wreckage aft towards the boilers we noticed a huge rock that actually overhangs the wreck with shoals of bib hiding in its’ shadow while the rocks of the reef above it glowed multiple colours due to their carpets of jewel anemones.

Regrettably our time was up & so we ascended, spotting a small compass jellyfish on the way.

On the surface the sun continued her dominance on a sea with a little more swell than before as we boarded & exchanged tales of our sights.

Though we had the option of a 3rd dive (a credit from yesterday’s aborted 2nd dive) we decided we’d prefer to have a credit & a relaxed pack up & journey back so it was off to retrieve the tents & bid farewell for another year.

My thanks to all those who attended, divers & non-divers alike, you made the weekend and I get the feeling we all felt it was worth chancing the weather!

We’ll be doing it again next year, perhaps with a slight twist – to be determined!

Half the intrepid divers