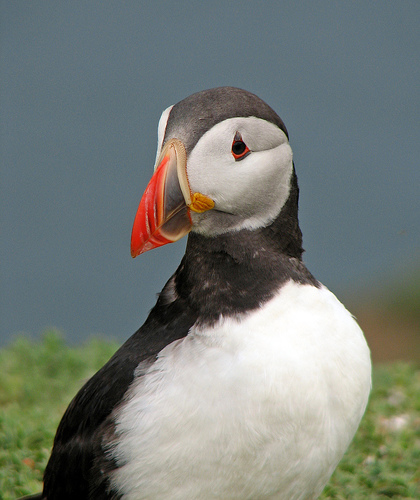 Saturday 23rd May – Monday 25th May : Well as usual the weather was awful – awful bright and very calm!!
John, Tim, Pete, Sue R., Mike, Bob A., Jo, Mark, David, Christos & Neil formed the expedition party this time. The camp-site was fine – good meals in pub (American supper – never will understand that – it is POT LUCK) and a fish & chips evening on Sunday night.
We had an excellent w/e diving with several runs to Stack Rock and a run to Skomer with both boats, 8 divers and 2 bottles each so we could do 2 dives in one trip. Both boats performed superbly and the weather was kind every day. I think everyone enjoyed their dives apart from lots of hard work launching and recovering the boats and carrying gear up and down the beach.
It was Christos’s first time as an official Ocean Diver, congratulations, and I must write down a list for you of all the creatures we saw on the sea bed.  Lifting the weight belt from the seabed was quite an effort too as it needed two DSMBs to get it to the surface because it was so heavy.
Oh, and the Puffins – I thought they only existed on telly, and the seals who lay on the rocks and watched us faff about getting into the water.
Not everything went smoothly and we got the humber stuck in soft sand just short of the slip and the Ribcraft was swamped by the surf and filled to the transom just as we were about to drag it out. The look of horror on Tims face was not a pretty sight. Luckily lots of other boats were struggling so a bit of mutual help saved the day for everyone. Our efforts were rewarded when the guy with the big tractor returned the favour by pulling us out. Hopefully in time to come we will look back and laugh about it all.
The following day we were a lot slicker.  Both boats are now washed and safely tucked up in the boat shed.
Special thanks to Tim as Stand-in DO and of course Mike as DO, John for organising the weekend, Sue for taking boot-loads of bottles to be refilled – at an eye watering £5 each!, Jan for being a refreshment post again (and Paddy & Jenny for not laughing too much at our efforts recovering the boats & helping us with our equipment going to & fro from the far distant car park – you could hardly see the sea from it!) , the boat-handlers who took it in turns as non-diving cox, Tim, Paddy & Pete for taking their 4x4s on the beach to launch & recover and finally to the boat-towers, Tim & Neil, without their contribution we would not be able to dive.

If the feedback is to be believed a good time was had by all!

John – Overall I had a great time – and needless to say THE PUFFINS  how many did we see and even to the point of being bored watching their antics!!

Sue R – I really enjoyed the weekend and look forward to being able to get the boats out of the water using a different method in future ! it was fun, interesting and even dry (when it needed to be!) with lots of learning points to consider …