Saturday: the usual early start to get down from Bristol & having loaded my kit into Colins’ van we hit the road. The weather got worse as we headed south but the Plymouth forecast seemed to be its own thing & promised only the chance of rain – we’d see!

After unloading outside Aquanauts & Colin parking up the road we greeted Gary (our skipper) & Martin (deck-hand & chief bottle washer!) & were welcomed aboard. We were 6 from our club & John & Mick from Street sub-aqua filling a few extra spaces so there was plenty of room on TopGun (TBH even with a full complement of 10 its not cramped).

Leaving the Breakwater behind

A boat brief from Gary & we went through the lock to take a look at what might be on offer; with Sunday looking to be the better day & with a fair bit of swell sites further out were off the menu so rather than the usual Eagan Layne/Scylla we’d do from the RHIB we opted for the Elk which we’d done once before. As the skies changed from light to dark cloud & we received a smattering of rain we kitted up & headed down. Geoff buddied with Tim, Claire with Luke, John with Mick & myself with Colin. 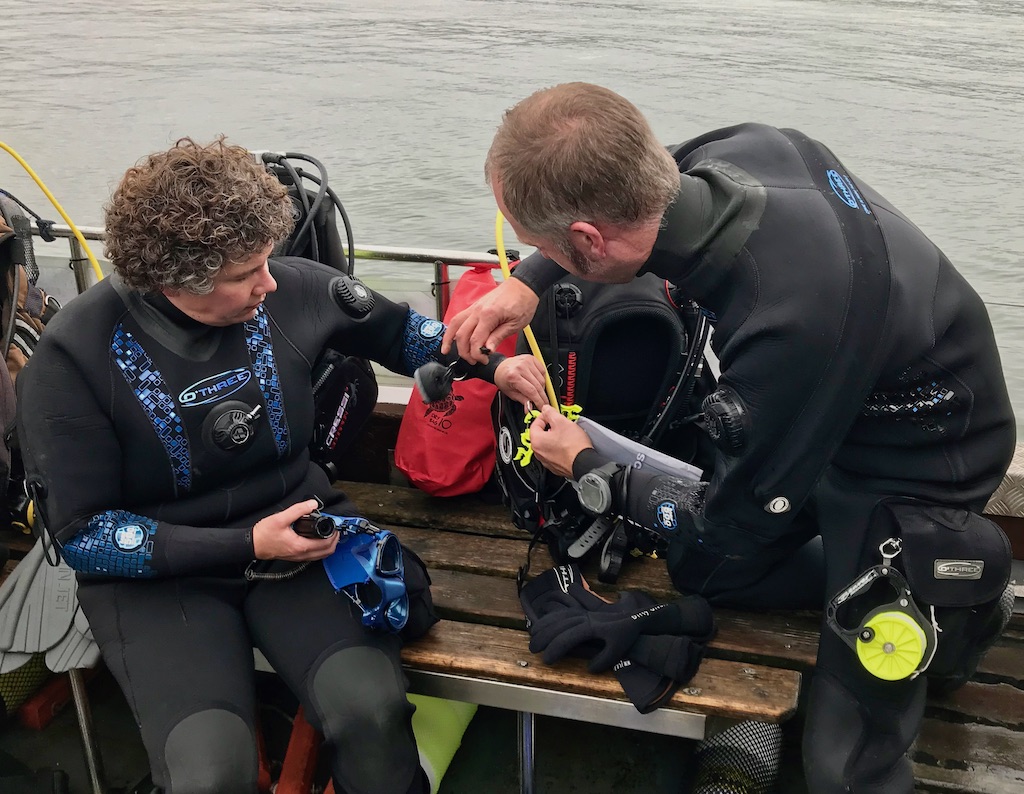 Colin & I descended the shot slowly (Colin still getting used to the warmth & buoyancy provided by a drysuit) and reached the end of the shot with no wreck in sight. We picked a direction (SE) & headed off across the sandy bottom broken by scattered rocks & furrows with starfish & smaller fish. In the perhaps 3 metre viz Colin found a BCD weight but couldn’t keep it (not enough buoyancy), spotting fish to the left & figuring they could be a sign of the wreck we turned to the North East and a short while later the bow of the Elk appeared – unfortunately we were out of no-deco & so had to head up over the bow across the deck & carry on up, briefly spotting the shoals of bib under the remaining deck spars. 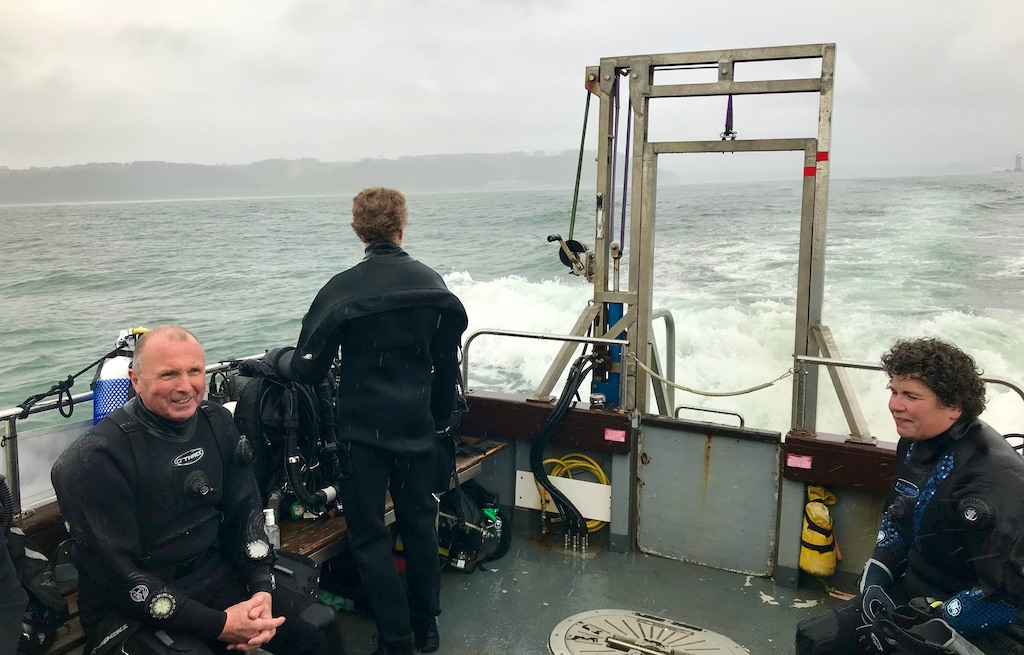 On our return we found that Tim & Geoff had found the wreck almost immediately (heading the opposite way to the shot running, figuring it had likely been pulled off), while Claire & Luke and John & Mick had spent their time on the reef & hadn’t found the wreck at all – at least we saw it (however briefly!)

The sun appeared and as quickly disappeared behind cloud & the odd shower while we took our surface interval & tucked into pasties, bananas, bear biscuits (John lovingly bit the head off his) & chocolate partnered with a very welcome hot chocolate.

Tinkers’ Shoal – The second dive was to be a rummage in Tinkers’ Shoal, always a good choice in less than stellar viz. It was to be John, Mick, Geoff, Colin & I on this one with Claire, Luke & Tim sitting it out for various reasons. 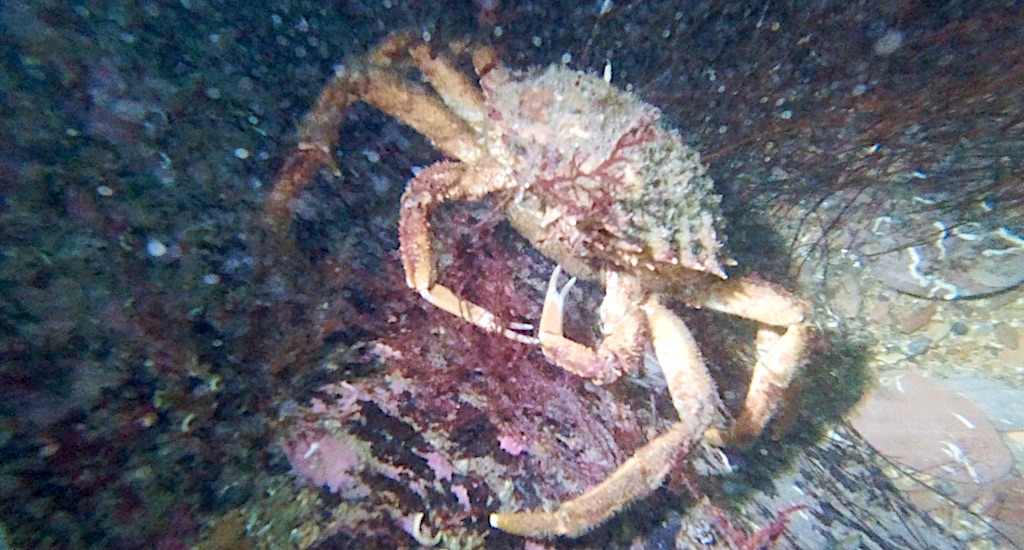 We descended to 12 metres and kelp but working our way through it we then proceeded to furkle (is that even a verb?) amongst the various rocks, channels & sand. 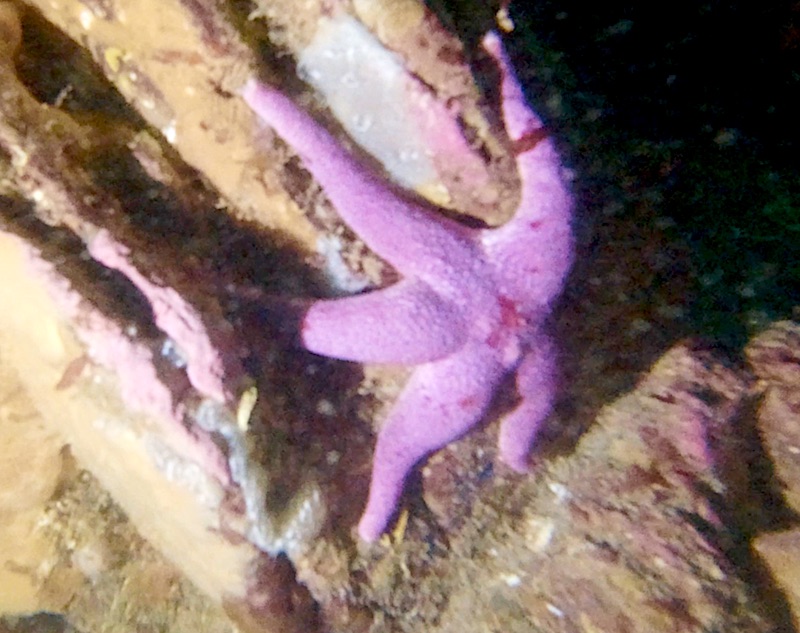 Geoff spotted that most snakelocks anemones had small crabs as companion & we spotted larger spider-crabs, one mistaken for weed until it moved!. The bottom turned up the usual collection of pottery shards among the starfish of various hues, sponges and inquisitive wrasse.

Being only 12-15 metres we had up to the full 45 minute limit Gary had set before going up and on getting back to the boat Colin revealed his find: a stepped brass rod while I had surfaced with some kind of ceramic electrical insulator. 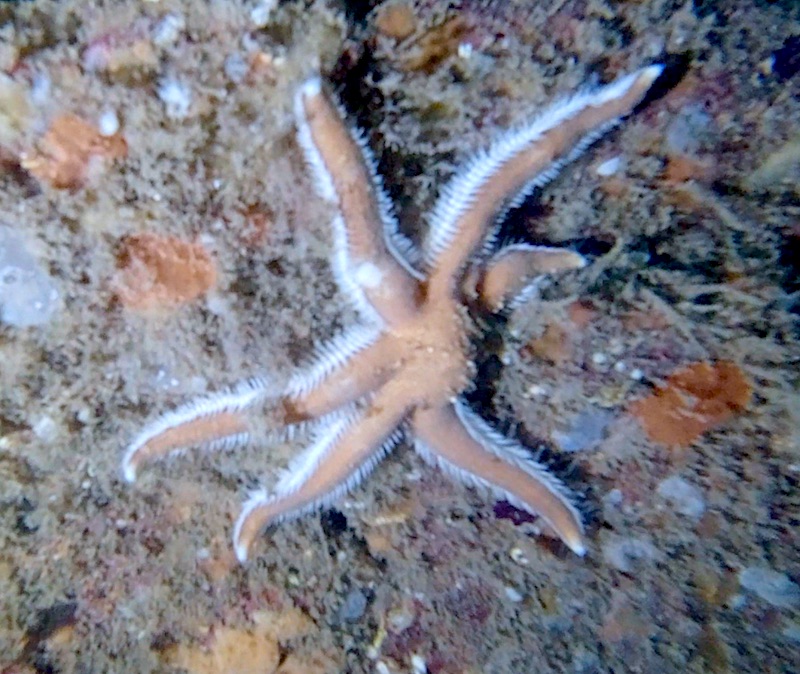 Time for those welcome hot chocolates and then back to harbour to put the cylinders in, walk to the car park in our drysuits – some strange looks but that’s’ tourists for you and change then back to the B&B (Kynance House) – turns out my room is the exact same one as last year!

Claire moved the meal up as we had finished so early so we went for a meet-up/drinks and a chat at The Waterfront, a nice contemporary bar/restaurant on (you guessed it) the waterfront!) before moving on to the Pier One bistro, just a few minutes further along the front – also very nice & more importantly with a decent burger menu (Claire knows my love of burgers), the blue & bacon was excellent as apparently was Tims’ veggie burger – though I did feel for him as he sat there surrounded by everyone else tucking into their rare or medium-rare steaks! John & Mick regaled us with funny diving stories (as they continued to do so on the boat – a real find these two!) before it was time to go back for an early night.

Sunday: Breakfast at 7:30 (full English of course!). With a better forecast – less wind (though picking up later) and absolutely no rain (not sure what the stuff was that fell from the sky later in the day!) we were up for something a little more challenging. After bidding farewell to Claire & Luke who had other demands on their time we 6 headed for the boat. 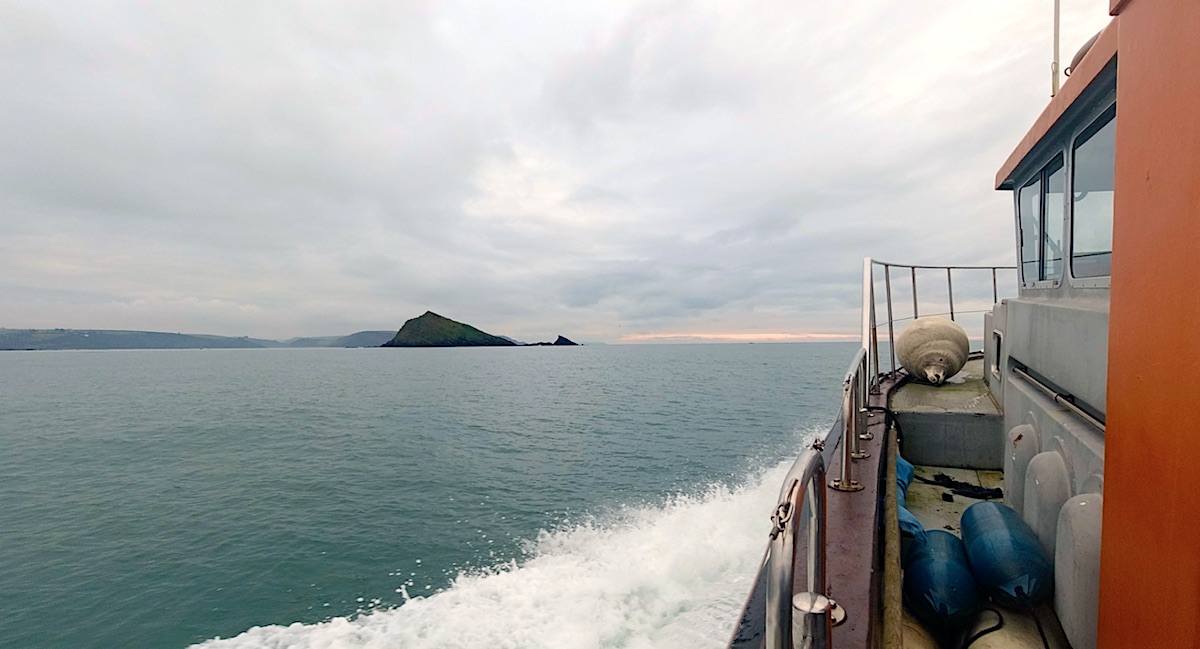 Heading towards (& past) the Mewstone for the Persier (& maybe some sunshine!)

45 minutes later (after we got through the early morning queue for the lock) and we were there: the Persier. Martin dropped in a shot & down we went.

Persier – Like the Elk the Persier is quite deep so we were a little limited being on air but with the shot right on the wreck we started off on the right foot & spent a very enjoyable 30 minutes pottering amongst the wreckage, the impressive & lengthy drive-shaft (‘owned’ by an steadfast Spider-crab), the forest of miniature fans occupying the plate and the usual assortment of fish etc. Viz was 3 metres, 4 at a push but enough to have a good root around.

Visibility not the best

Must be spider-crab convention week!

Hilsea Point Rocks – A surface interval with the usual welcome selection of drink & food & then the final dive of the day & indeed the weekend: Hilsea Point. Looking back I see I’ve done this once before but with so much stuff it the water it was effectively a night dive & the only things we could see were those directly in the beam of a torch. Thankfully that not the case here.

No shot this time, just dropped in ‘blind ‘ to descend to rock ruts filled with anemones, starfish and sponges. A large fish, clearly unbothered by our bubbles gave Colin a good face to face stare before finning off – unfortunately the photo didn’t come out! 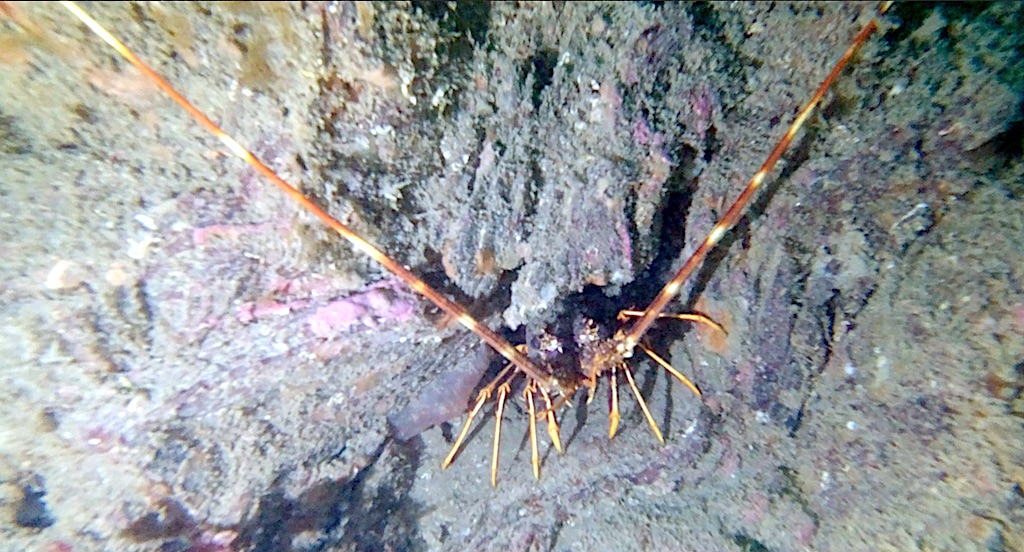 We explored the ruts then headed over the edge of the pinnacle and spotted Tim & Geoff exploring the wall. Descending slightly a largish lobster waved its claws from under an overhanding boulder while further up the wall his cousin, a crayfish waved its feelers.

That scenic ‘from the bottom of the crevasse shot’

We continued to explore the wall & crevasses, glancing into one I spotted a largish dogfish doing what they do – resting on the bottom. Viz was pretty much the same as before (3-4 metres) but entirely adequate for our needs but meant we had to be careful to stay in sight.

Kelp appeared & as we were 30 minutes in Colin popped up a DSMB as agreed & we continued on until it was time to ascend.

The best dive of the weekend we agreed & Tim even had success with a computer he borrowed from Mick (3rd time lucky as 2 previous ones were about as good as the diver equivalent of a chocolate teapot!

Back to harbour over a rougher sea (the forecast for the wind picking up had been right) to unload & say our goodbyes.

After threatening Gary that if he was running the Winter Warmer next year we’d be back we mutually agreed we had actually had a very reasonable weekends UK diving. We’d made some good contacts with John & Mick & agreed to keep in touch for the mutual benefit of our clubs.

I’d like to thank Gary & Martin for their efforts on the boat, Claire for using her ‘local-girl’ knowledge to organise the drink & food, John & Mick for more than filling the spaces and the rest of my buddies for coming down. Look out for WW20!

Navy presence in the harbour