A suggestion from Sue back in the first part of the year & here we are – tempus fugit & all that!

Traffic from Bristol was easy though the contrast to the twisty little roads at the end down to Discovery Divers at Fort Bovisand was a bit of a challenge! Sue & Geoff had already arrived & parked up on the quayside & Red Alert was present & being loaded so I joined in the fun! 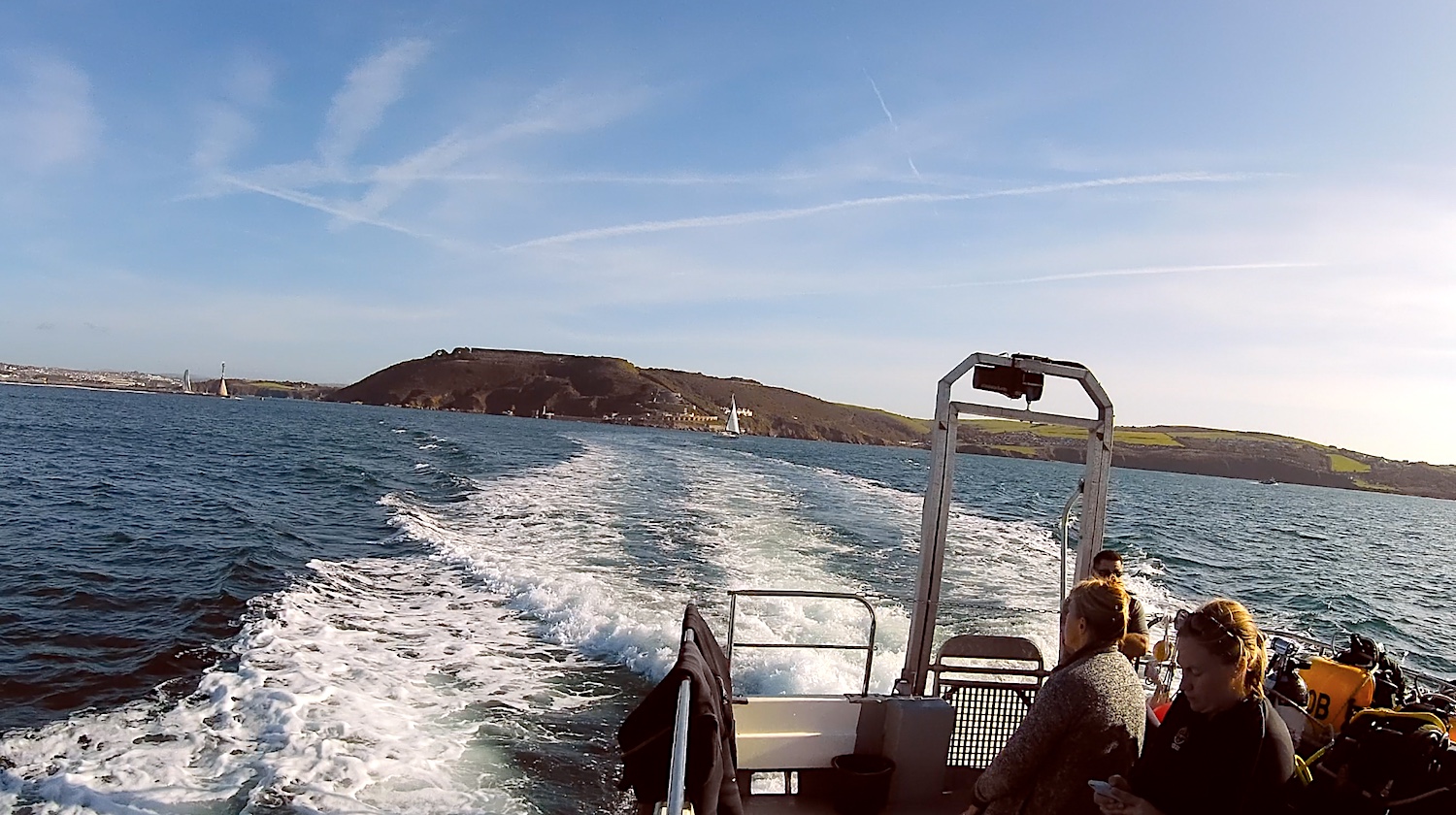 The days’ forecast looked to be in the Goldilocks zone (not too hot & not too cold) so we were hoping for good things as the last divers came aboard making us a total of 11 including 3 rebreathers and only short of Chris H who couldn’t make it at the last moment. Not to be fazed I buddied with Roy who turned out to be from Yate, a few miles from where I live!  Roy was taking a camera with some serious looking lights so I felt comfortable he’d not be in a hurry as I planned to capture footage from my first dive on Hand Deeps. 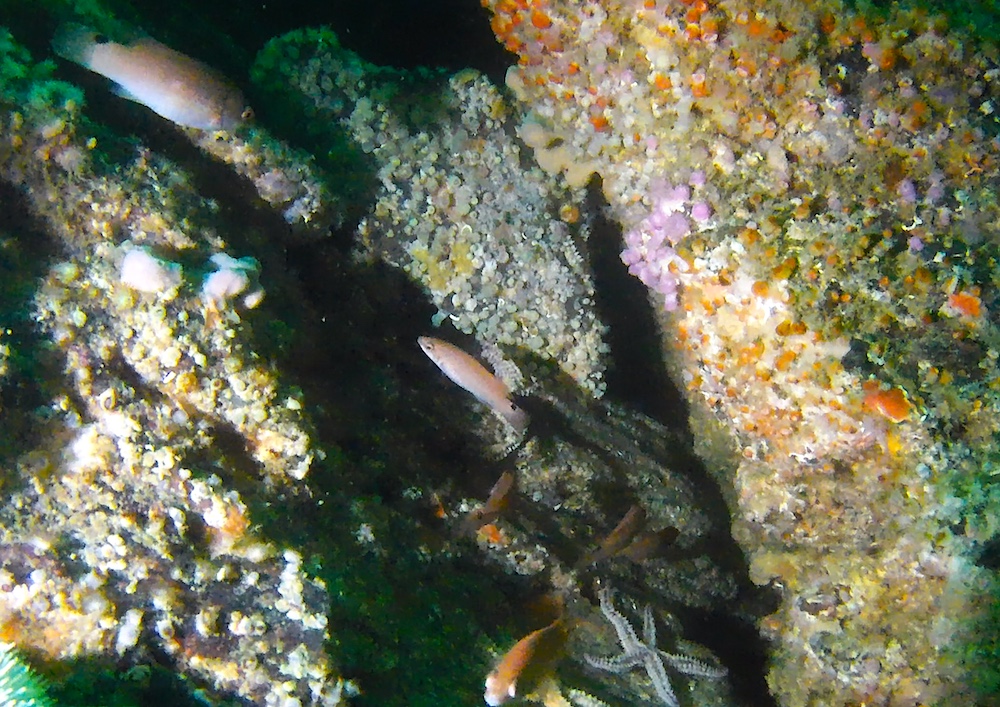 Hand Deeps – a pinnacle that rises to within 8 metres of the surface but also plummets to 40 metres with other pinnacles adjacent at around 14. Danny put the shot right on the top & we descended to 30 & then leisurely corkscrewed our way up.

The pinnacle itself has a generous dosage of dead mans fingers, urchins, pink sea fans & yellow sponges topped with a frosting of kelp all easily visible up to 6 metres away. In amongst the kelp Ballan wrasse cruised while completely fearless male cuckoo & to a slightly lesser extent female cuckoo wrasse repeatedly hovered in front of us staring quizzically.

With a 3 minute safety stop at 6 metres we surfaced into what looked like a sea of DSMBs – seems Hand Deeps was the site of choice for every dive boat in Plymouth & I was surprised we didn’t run into them below!

With the wind kicking up a little we made our journey to Whitsand Bay for a surface interval & a snack.

The calm in Whitsand bay extended to our mooring over the James Eagan Layne (we were significantly closer to land than the previous dive so that likely made a difference.) 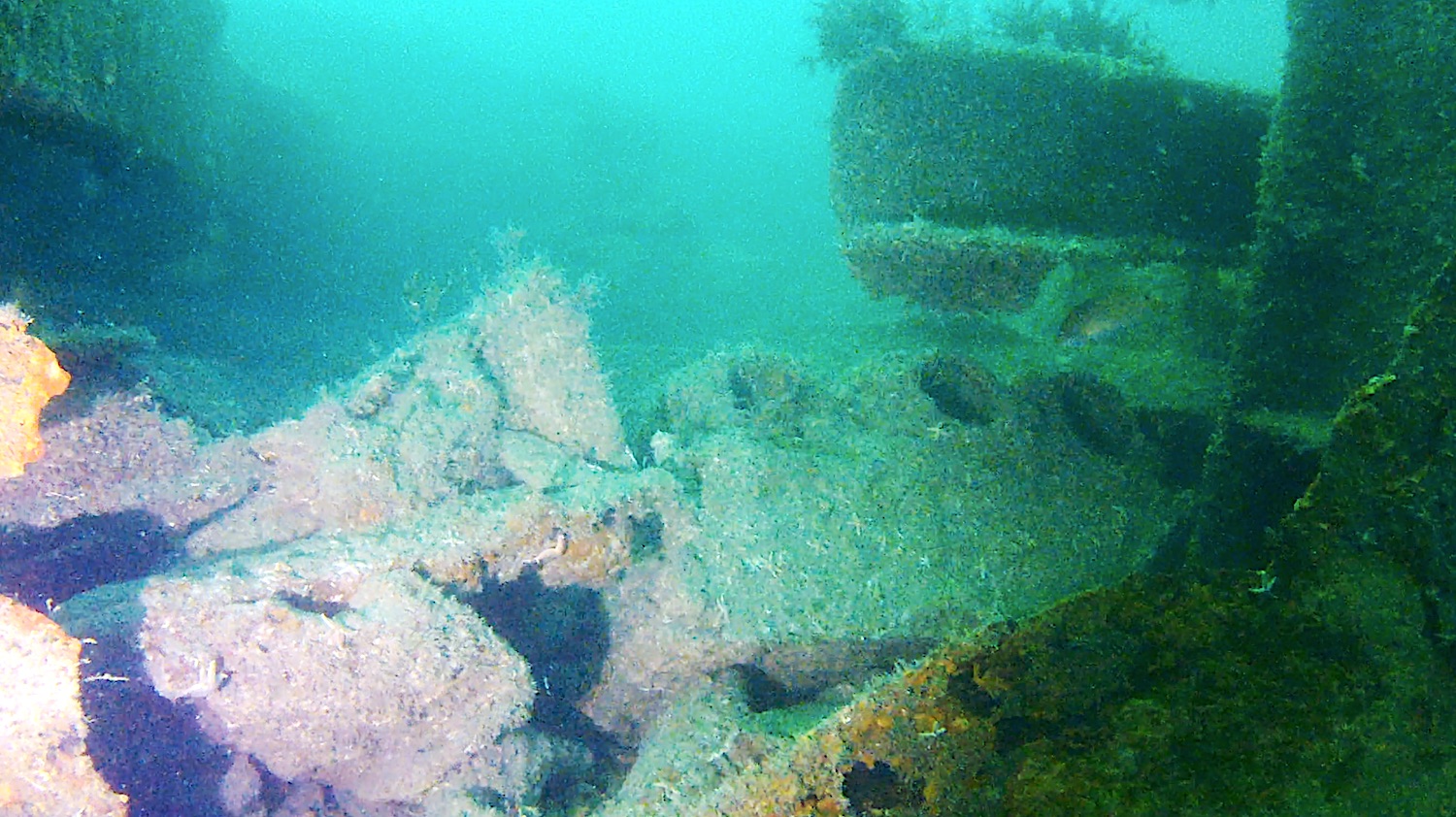 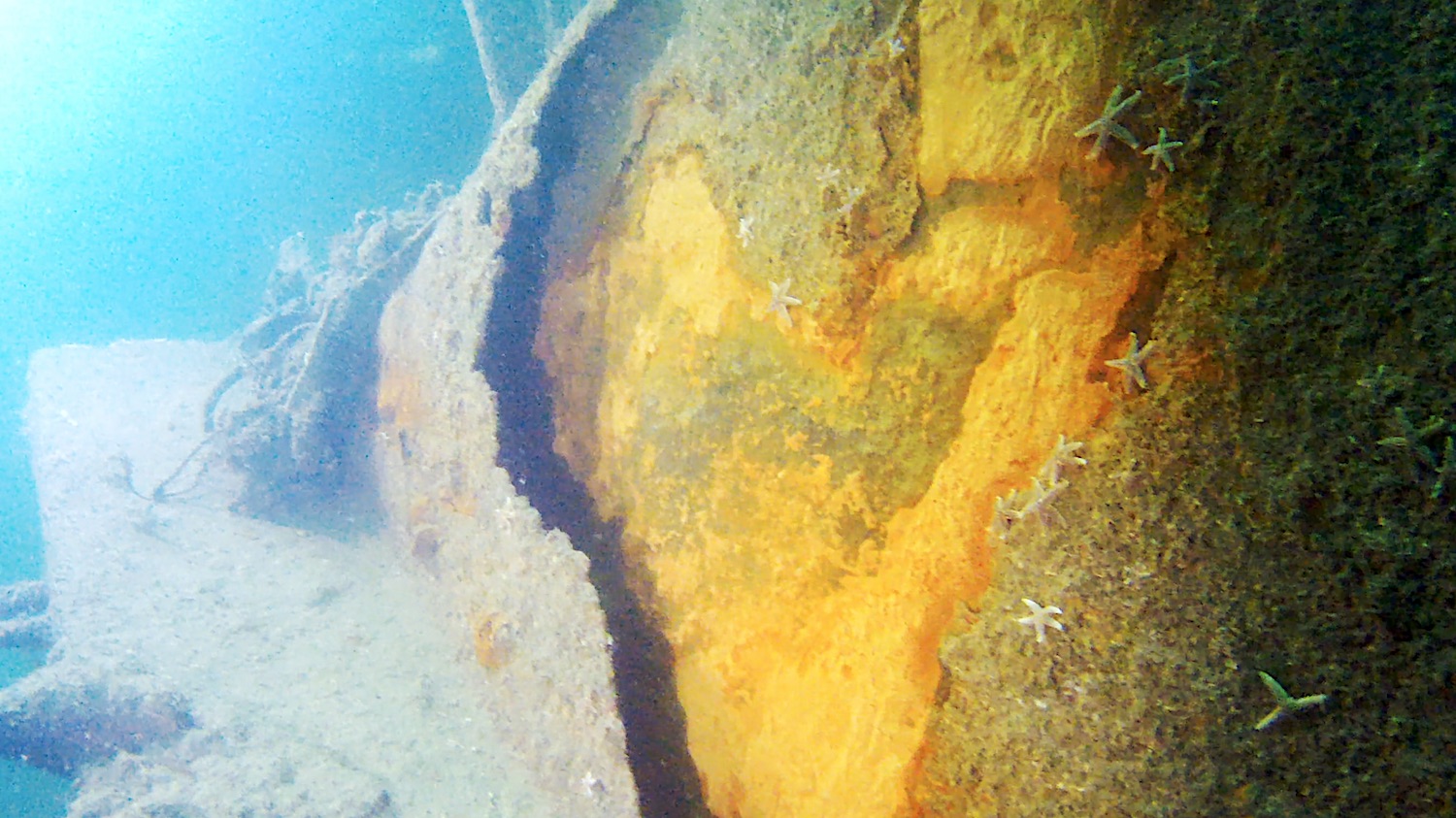 A few samples of the wreckage to be found below

Roy & I dropped in & followed the shot & I was very surprised to come across metal after only 15 metres but then realised it was low tide. This was the prow, the line of which we followed down through visibility that improved as we descended to the 5-6 metre range (still good for the UK)). 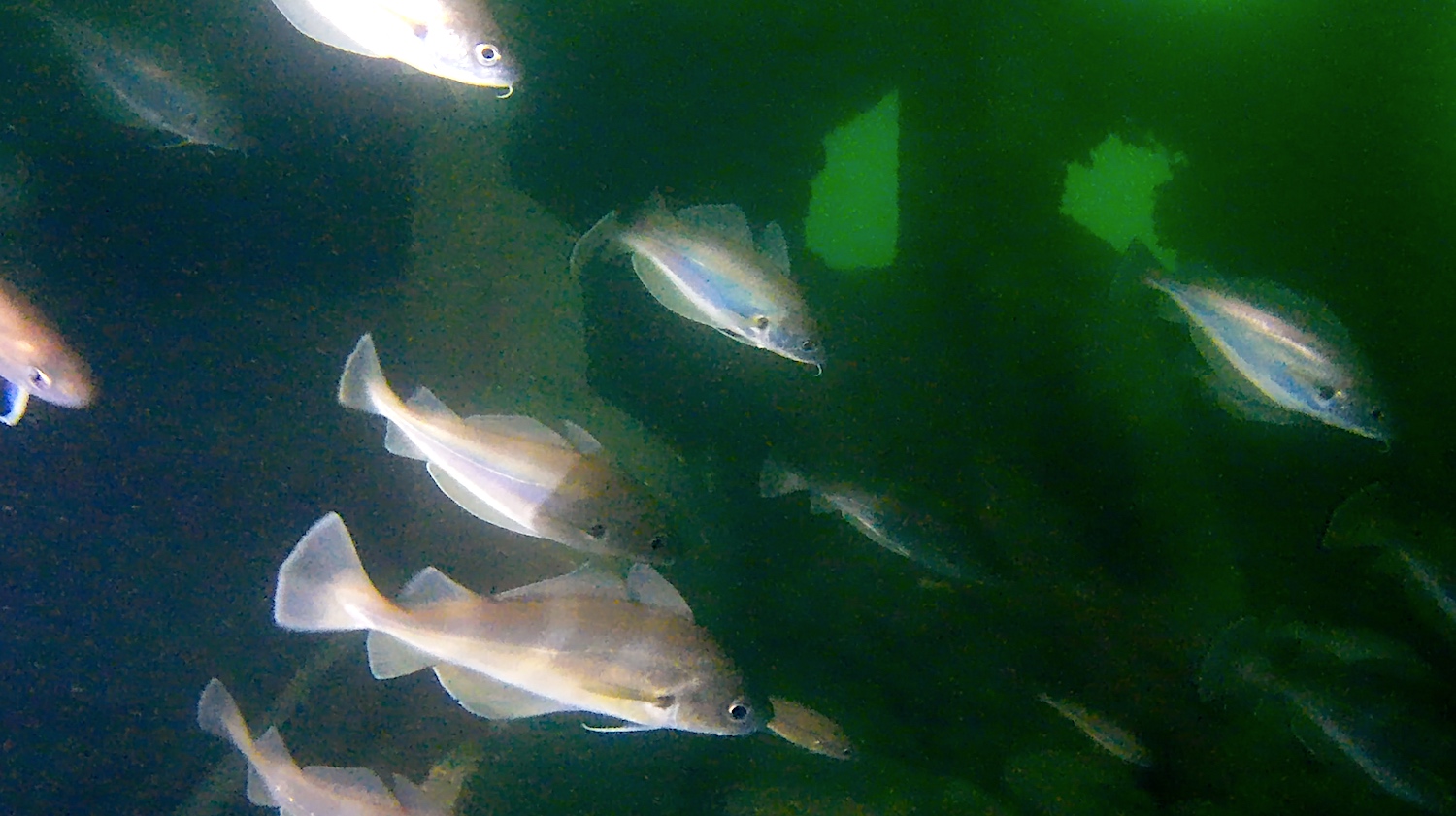 No shortage of fish on the JEL – as usual! 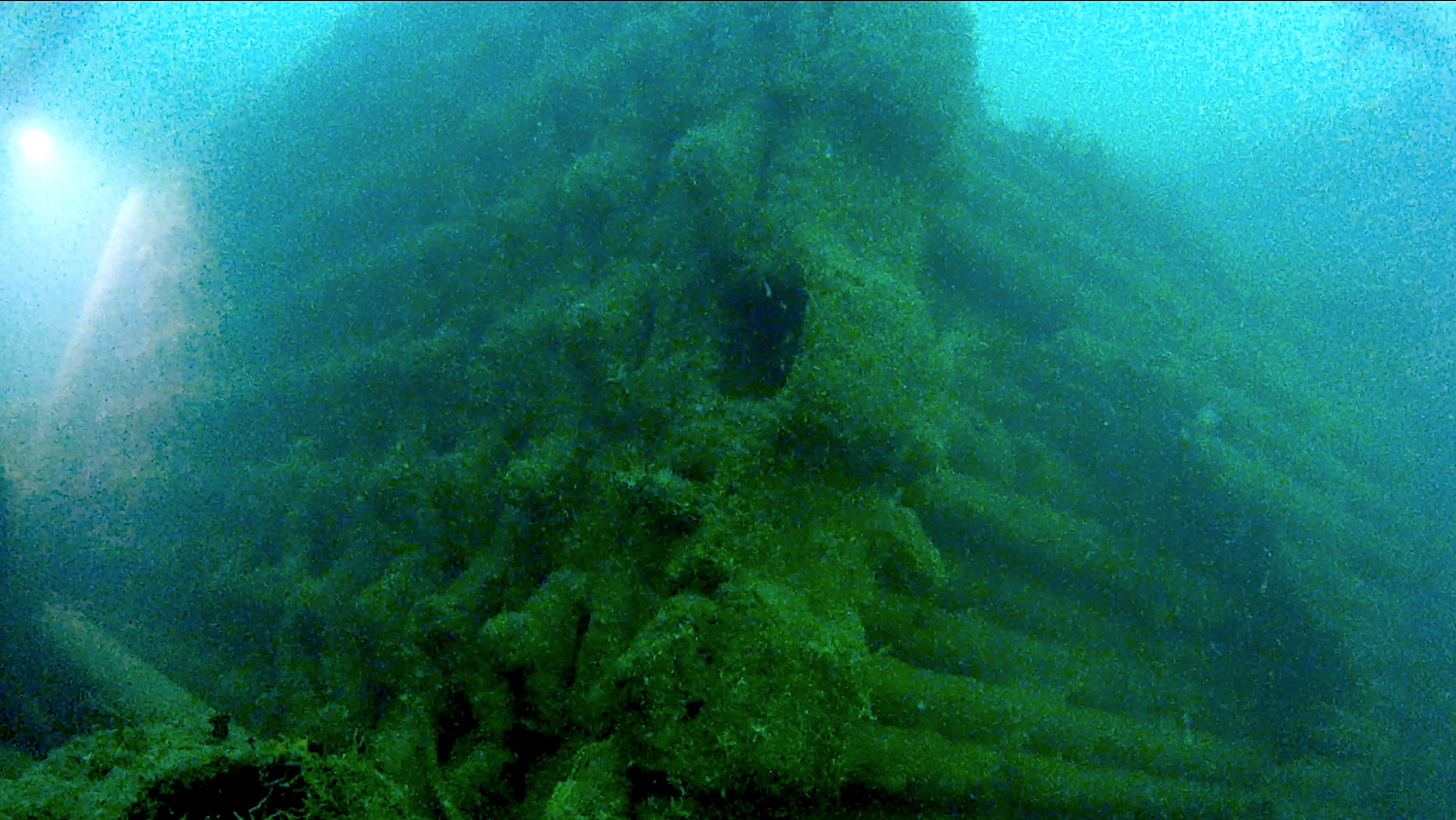 Roy cruised along the hull, his lights an easy sight to follow and as we moved inside we were greeted with the usual abundance of bib accompanied by the occasional Ballan wrasse. 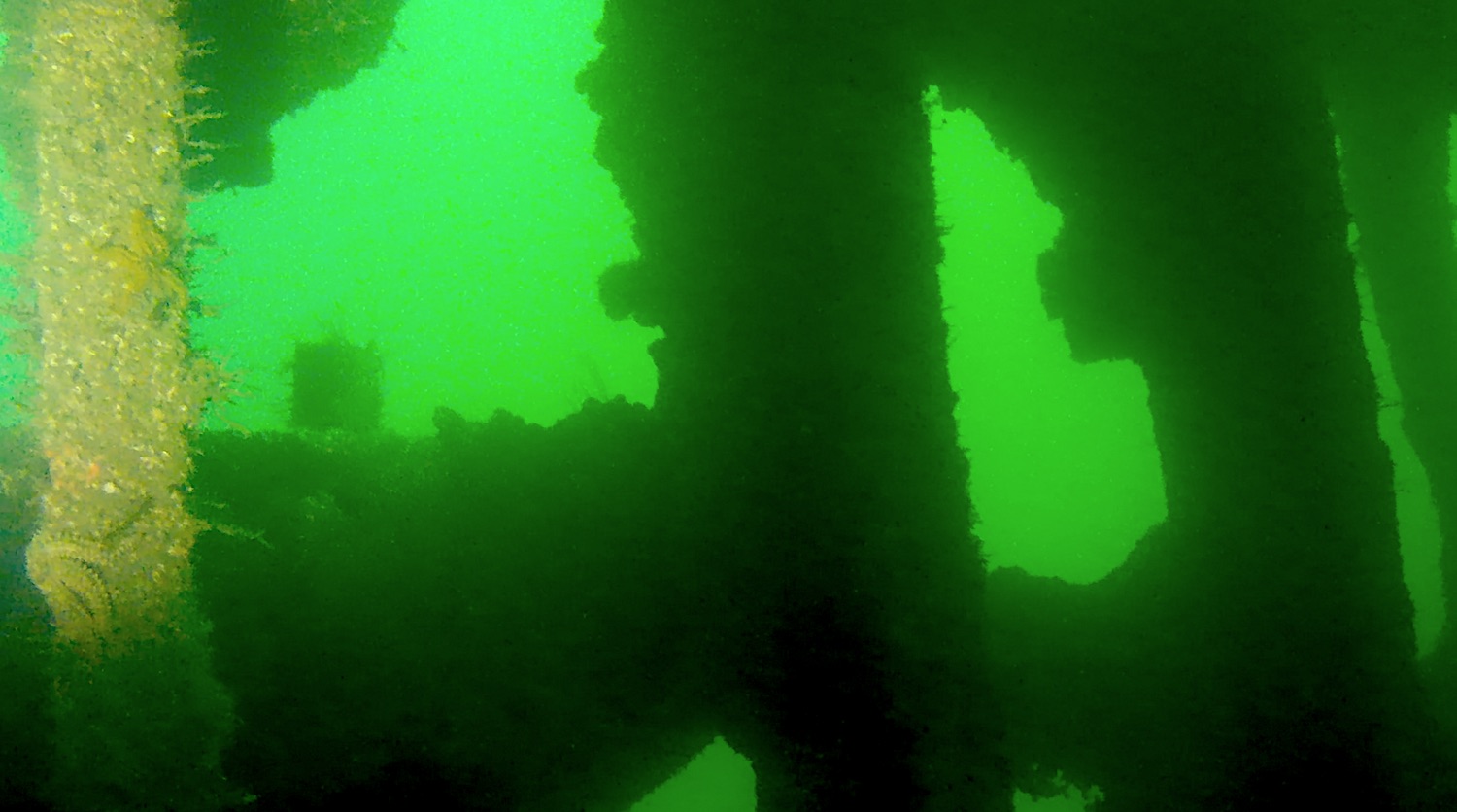 This time we did spot a few other divers cruising round the wreckage but she’s big enough that there’s plenty for everyone and the combination of low tide and a decent surface break meant we got a good 50 minutes on her before needing to go up. 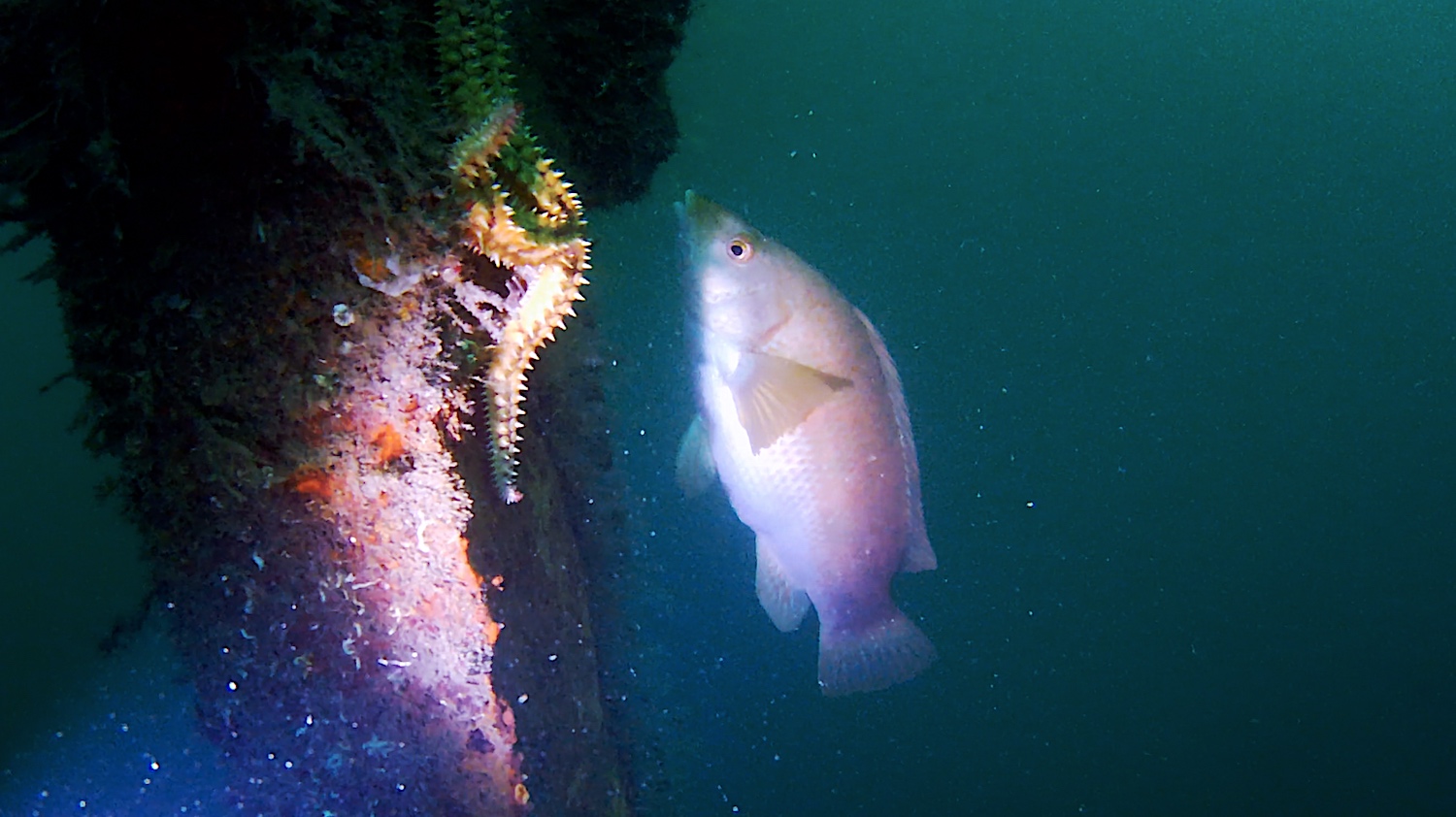 Then it was back to shore; Sue & Geoff were only down for the day so we said our farewells and it was cylinders into Dannys’ very handy dive shop for fills, clothes into the also very handy basic but solid accommodation & time to scoot across on the very timely ferry to Plymouth to meet my son from University & treat him to something other than pot-noodle!

Sunday dawned somewhat greyer than Saturday but dry which was fine by us. A bowl of cereal & a quick chat with Fiona & Simon from Bristol Channel Divers who had booked the diving & we loaded up & headed out.

We were heading east for the Persier & so had plenty of time to ready our kit & prepare for the dive. Chris had air but I had 2 12s filled with 32% nitrox so loaned him one so we were evenly matched – the Persier is a ideal nitrox dive being on average around 30 metres.

Rare shot of a male cuckoo wrasse not staring at the camera!

I’ve dived this one a couple of times before but like the Eagan Layne she’s a big wreck with plenty to see.
Danny had dropped the shot on the boilers so that’s where we started; still imposing at 4 metres tall & with a good population of bib. 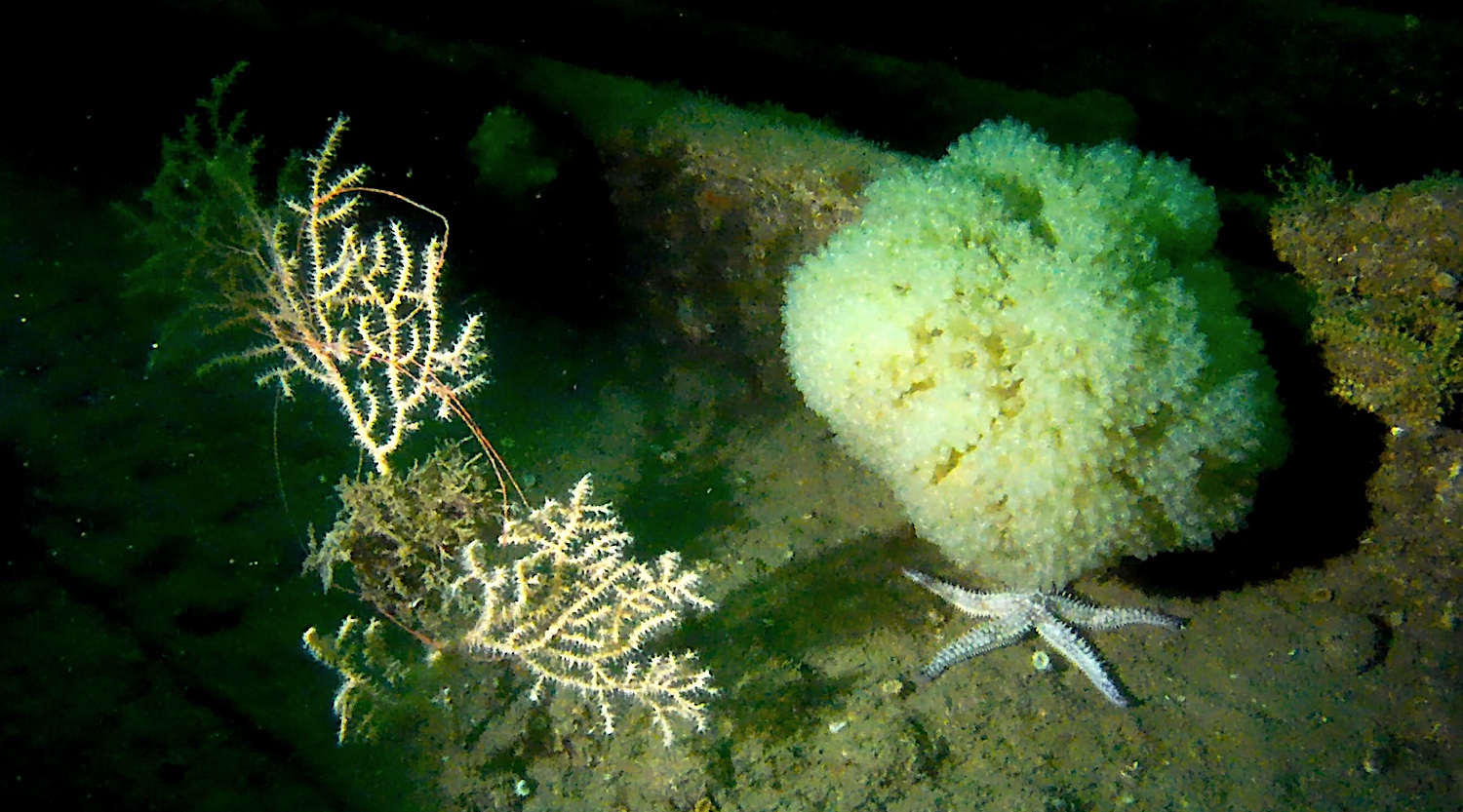 Further excursions amongst the scattered beams & winches turned up a fair selection of pink sea fans along with football sea squirts & rare red sea fingers. Cuckoo wrasse were their standard inquisitive selves as we pottered around & before we knew it our 25 minutes of no-deco were up & so we started our ascent.

After a decent surface interval & with a distinct chill in the air despite the sun trying to break through a very oppressive layer of cloud it was time to finish things off.

Wonderland reef is a series of pinnacles & gulleys a few miles to the east of the Mewstone.

One of the rebreathers & a couple of other divers went it before it was our turn to follow the shot the 8 metres or so to the top of the pinnacle. Danny suggested north for shallower, south for the depth we wanted then west, popping up our DSMBs after 30mins so he’d know where we were.

I led this time & after sorting a slightly leaky mask while on the bottom I duly headed south through the gullies until we got to around 20 metres & then due west.Though I say gullies these were quite distinct from those around the Mewstone, consisting of huge high slanted rock formation overhangs covered with white dead mans fingers and plumose anemones with narrow but usually swimmable channels. Other walls had a covering of urchins, pink sea fans and anemones & we were accompanied by various cuckoo wrasse. Between the rock formations there were often patches of white sand. Chris spotted a cuttlefish out in the open & a little later a crayfish hiding in a crack.

Crayfish on the ledges

Viz was a good 6-8 metres & it was very light compared with our previous dives.

I pulled out my DSMB at 39 minutes & duly sent it up but the line suddenly went limp & then floated back to me – it had come off the Clip ? 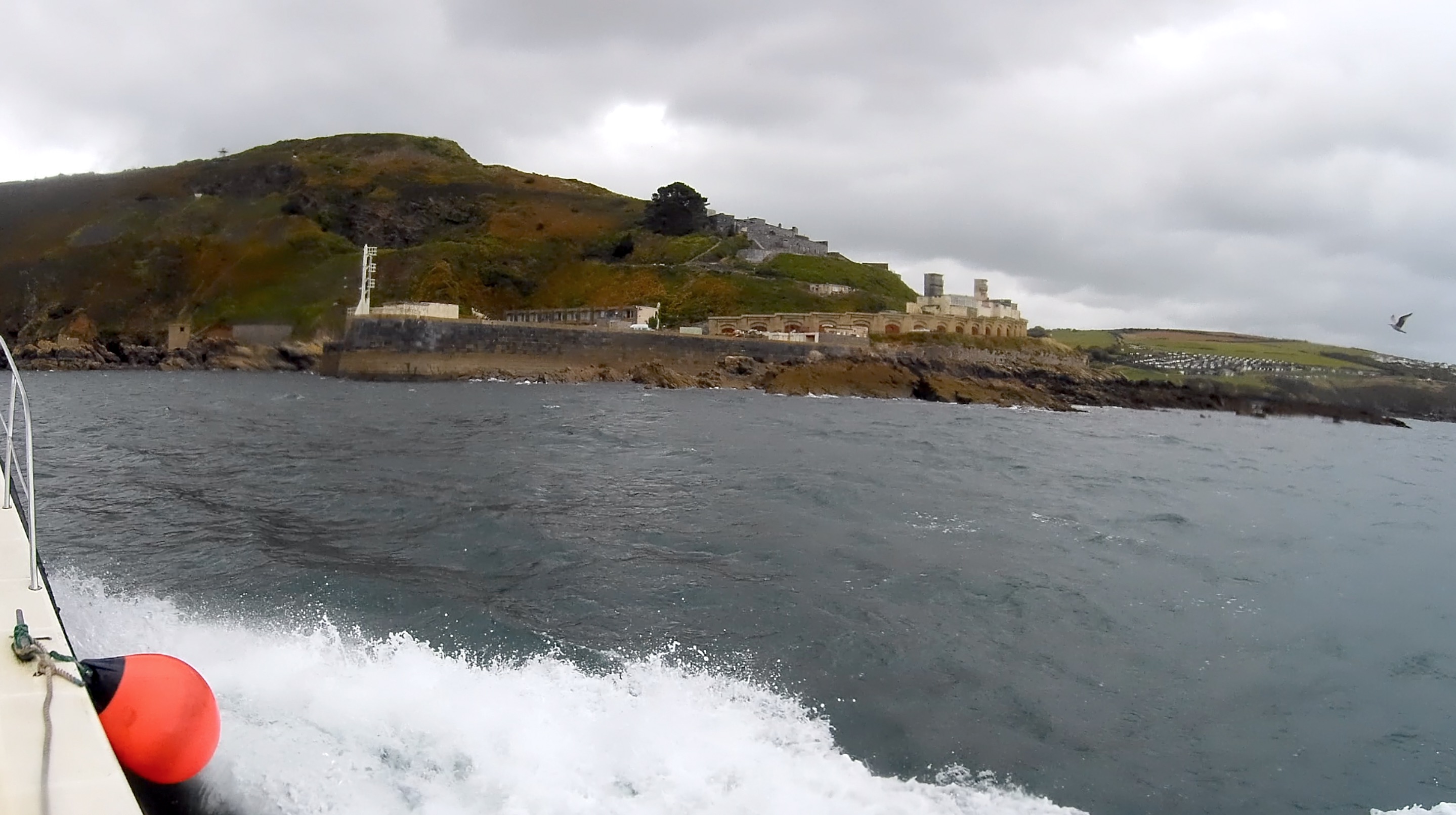 Heading back to Bovisand Harbour

Hoping Danny would spot it I helped Chris inflate his & then headed up. Danny had spotted the DSMB & I grabbed it with a pole as he manoeuvred past – whew!  In addition to the cuttlefish & crayfish Chris indicated he had also spotted a dogfish & other divers reported a ray – why can’t I have their eyes!

Then it was time for dinner! caramel sponge cake (courtesy of Roy) & a race back to be able to unload at the steps before low tide. We made it & firemans’ chain to create what looked like a serious baggage handling disaster on the quay.

All in all a great couple of days diving, new sites & sights to me & some memorable experiences for the storybook – lets do it again!