WOW. What an experience this was. Speaking from a personal point of view and not yet being a “fully fledged diver” it was certainly a great day out. The real Cornish ice-cream on the way home certainly swayed my mind to this being a very good and useful day. Harry (DO) had the last strawberry ice-cream. What happened to male chivalry? Obviously doesn’t exist when ice cream is involved. Maybe I can get my own back when it comes to the brandy at the Easter weekend away in Salcombe. I will be calling on any favours that weekend as I will be in a tent whilst most of the others will be in central heated caravans. I must remember the hot water bottles!!

I suppose I can always sleep in my under suit if it gets that cold – but just don’t get that close in the morning. 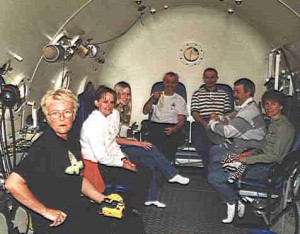 Anyway, the day started early as we had to be at the DDRC at 10.30 approx. We agreed that we just had to have the greasy spoon breakfast at Queen Anne’s Battery. We met for a quick breakfast then headed to the DDRC. The trip there was not uneventful. Harry led the way, however, as he came off the A38 we all got held up on the roundabout. It turned out to be ” spot the purple Corsa”, though it’s difficult to know which is which when there are two cars the same, each with two people inside. As we went over the roundabout I thought I spotted them back on the A38. However, I didn’t like to tell Tony (our driver) that I didn’t have my glasses on!! Luckily we ended up going the right way. Thank God!

When we got there, we were able to help ourselves to Tea and Coffee which was much appreciated. We were then informed of the days plans. 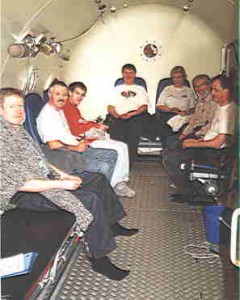 We were in for a shock. We actually had to use our brains. Fancy that! And I thought this was supposed to be an easy dive – no such luck!! There was a psychologist (Sam), who explained the tests we were to do both under pressure and on the surface. What hope did we have when we couldn’t even understand them on the surface? We aren’t all thick, they were hard! Honest!

We had two groups of 7. The plan was for each dive to descend to 40 meters. However, one of the divers in each group had difficulty clearing their ears. We all felt very gutted for them as they were very disappointed when told that their dive was over. 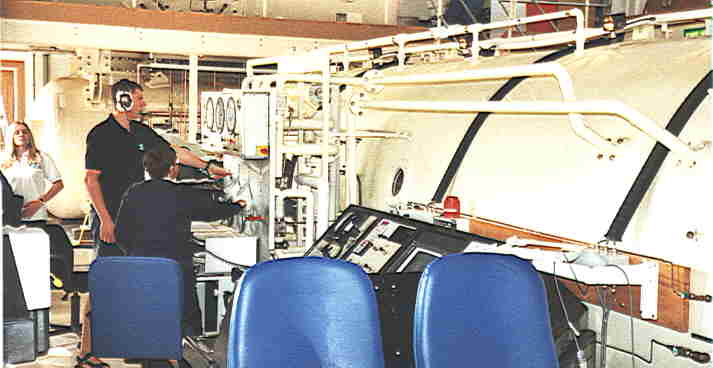 Instead of the 40m plan, the first dive was curtailed to 30m. I was in this group. My deepest dive to date was 23m. I found that during this dive I had to clear my ears continuously during the descent. Then someone broke the silence. We all burst out laughing as due to the higher density of the air it sounded as if we had been breathing helium.

The next group made it all the way to 40m. How funny?? My son (the one on the right) is 16 and talk about Narcosis. He was so narced he couldn’t even keep himself sat down. He now has a new nickname! 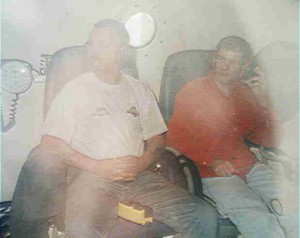 We all did our tests. Thing was, the second group did their first tests at the surface so in theory should have achieved better results. This will be interesting to see when we all get the results.

Great day out & a must for any diver especially when all monies paid for the day are fed back into the centre just in case any one of us ever needs to use the facility for reasons other than a guided tour.

Take a virtual visit to the DDRC and find out who they are and the good work they do at www.ddrc.org