A 28 hour pilgrimage that kicked off at 4 am finally bore fruit as we settled into our beachfront accommodation at Scandi Divers in Puerto Galera after our own version of planes, trains & automobiles (1 taxi, 2 trains, 2 planes, 1 van & 1 water taxi ). Our final leg – a very bouncy trip across from Batangas shook us awake to be greeted by a very friendly group of Scandi staff who explained with great enthusiasm how things worked.

Our base for the week – paradise!

Geoff & Chris had a room right next door to the front desk & Dive centre itself while mine was very private further down the bay.
Larry our dive guide explained diving would depart at 8 so we changed into comfortable clothing & headed for the LaLaguna Gecko bar 1 metre next door to catch the rugby World Cup final (England v South Africa) accompanied by a few beers. Luke, the General Manager introduced himself & reminisced about dives past & to come. The match result wasn’t what we’d hoped but we had the consolation of a weeks’ diving ahead of us! 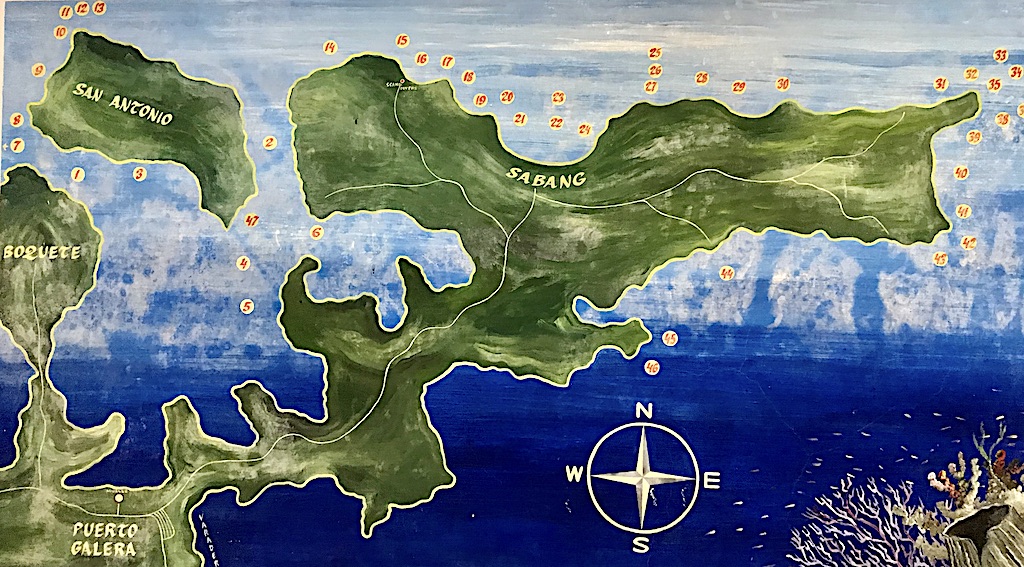 It was rain (warm!) overnight then it was up for a 7am breakfast just upstairs on the terrace overlooking Big LaLaguna bay. A ‘Divers Breakfast’ was on the menu so there was no need to read further &  the Scandi staff did us proud.
Just before 8 Larry & the guys sorted me with my rented gear (including a shorty that meant I would not be easily missed!) & set up Geoff & Chris’ kit.  We’d opted for Nitrox (32) for the week for comfort, bottom time & health & so after Chris checked the cylinders & Larry gave us the brief of where we would be diving, what we might see, max depth & dive time there was nothing for it but to walk the less than 10 metres to the boat, board & sit down to be whisked away! 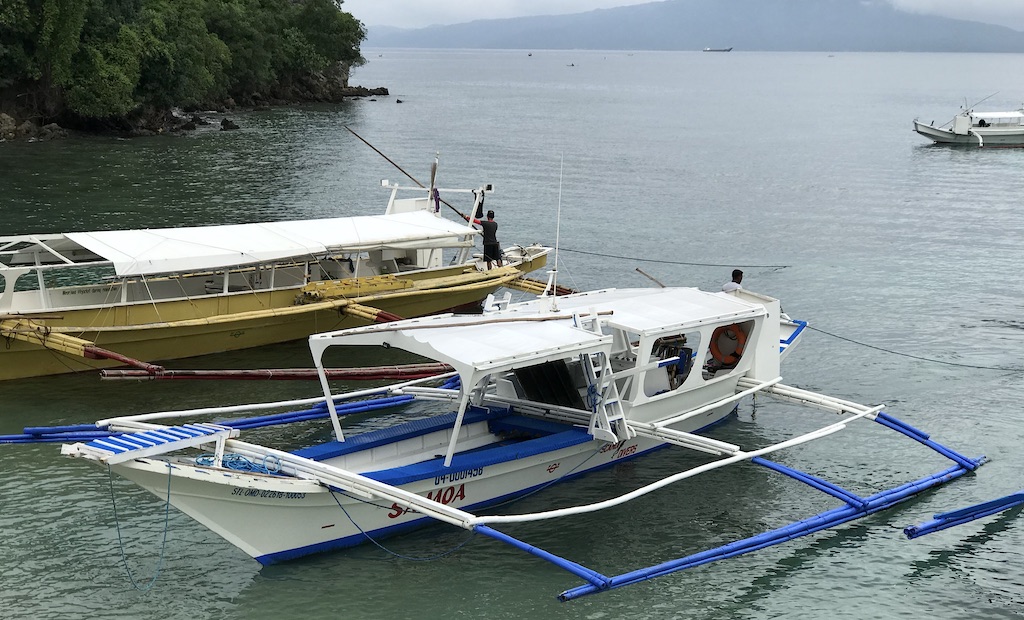 Typical dive transport – one of the larger Scandi boats

Initially our boat was ‘Wonderdive.ph’ a smallish craft able to hold eight or so, later in the week we had the chance to travel in the larger Scandi Divers, Scandi Divers 2 & Samoa all of which had the same narrow hull with two bamboo outboards for balance and crewed with a Captain & one or two deck hands. With just the 3 of us plus Larry as guide we could not have been more comfortable & relaxed and the fact most of the dive sites were no more than 10 minutes away was a bonus!

Lionfish – we saw many of these

Moray Eels – white-eyed in this case, plenty of these around!

Most days followed a very easy pattern: breakfast at 6:45, first dive at 7:45, 2nd at 10/10:30, then lunch on the terrace, 3rd dive around at 1:30 and then a chance to chill until either a night dive at 6 with dinner & a few beers to follow or beer then dinner. With happy hour from 5-7 & very reasonable beer prices we had to remember to curtail our passion for the amber nectar!. An early start meant an early finish & the day was rare we were up much past 9:30/10:00 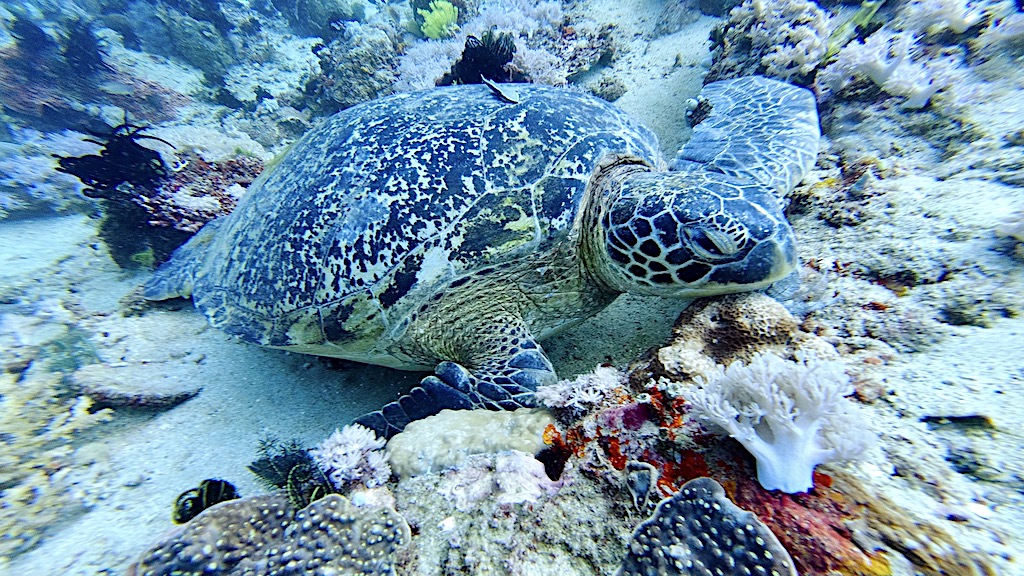 Over the course of the week we got to dive

Highlights of the sites were the superb visibility, the volume & diversity of life & of course Geoff’s startlement when, with his head/camera in a hole a sea krait decided to visit him at speed 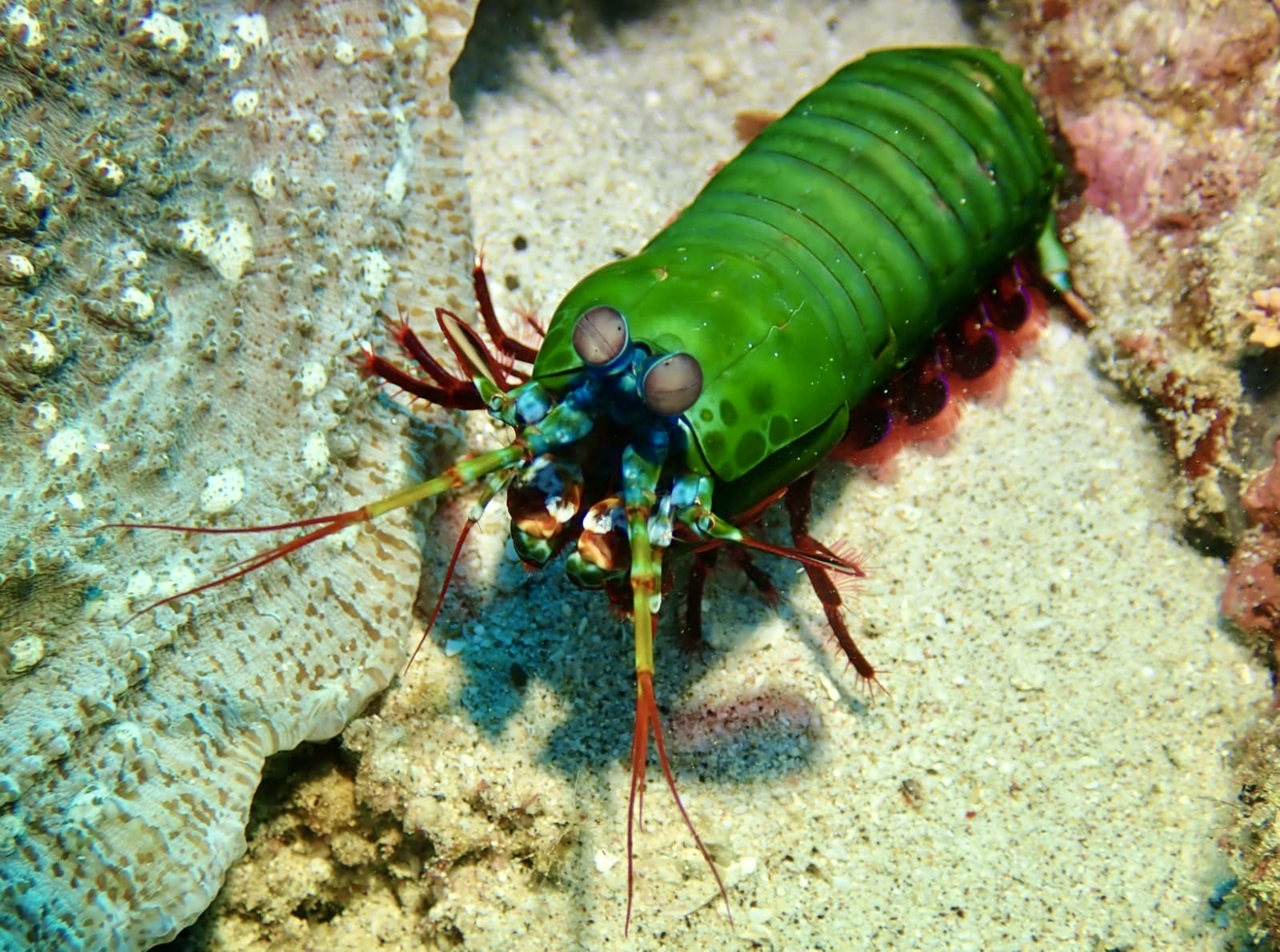 Mantis Shrimp – these guys can move! 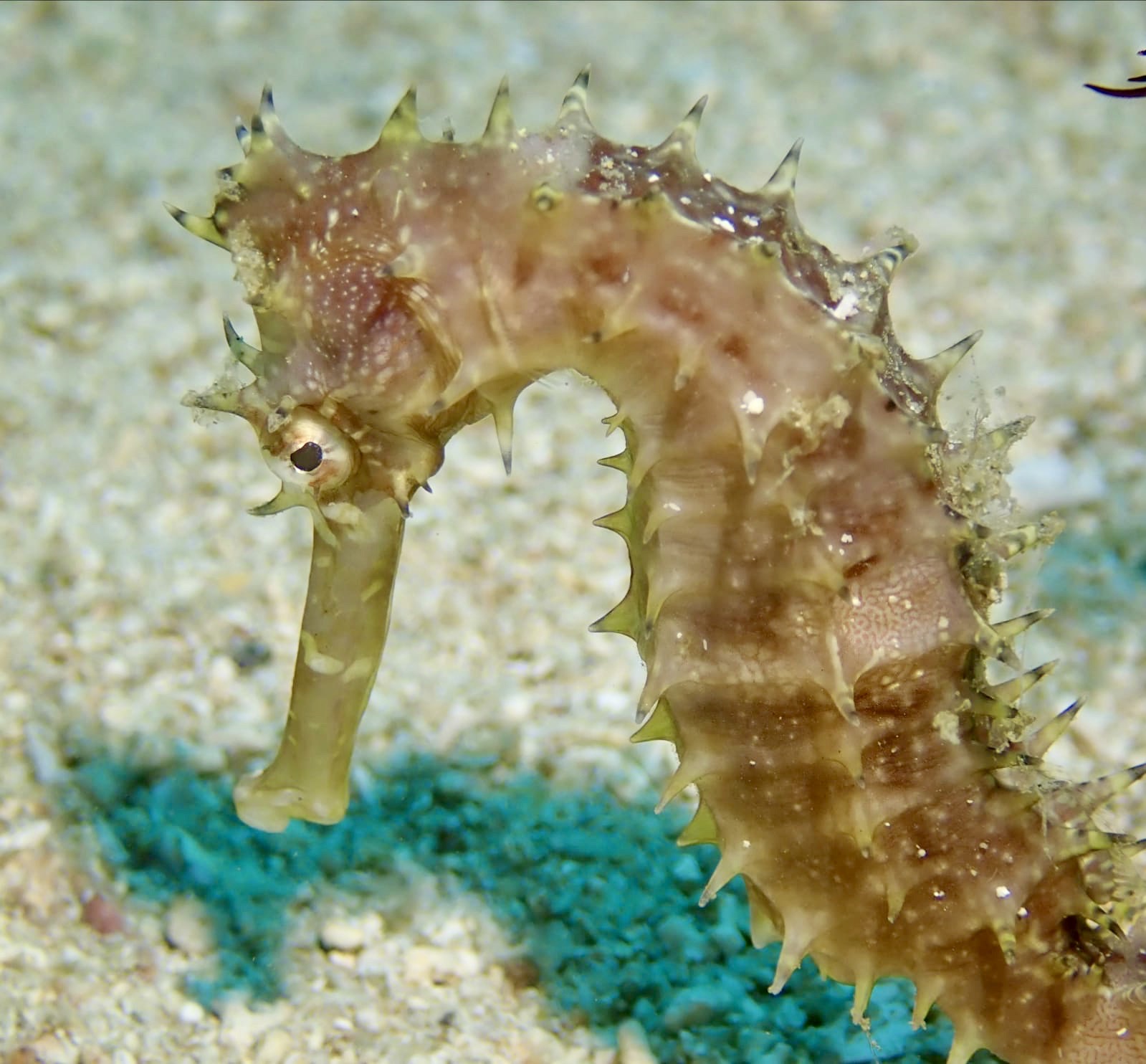 Sea horse – lots of these around in Sabang Bay

One of the afore-mentioned sea kraits 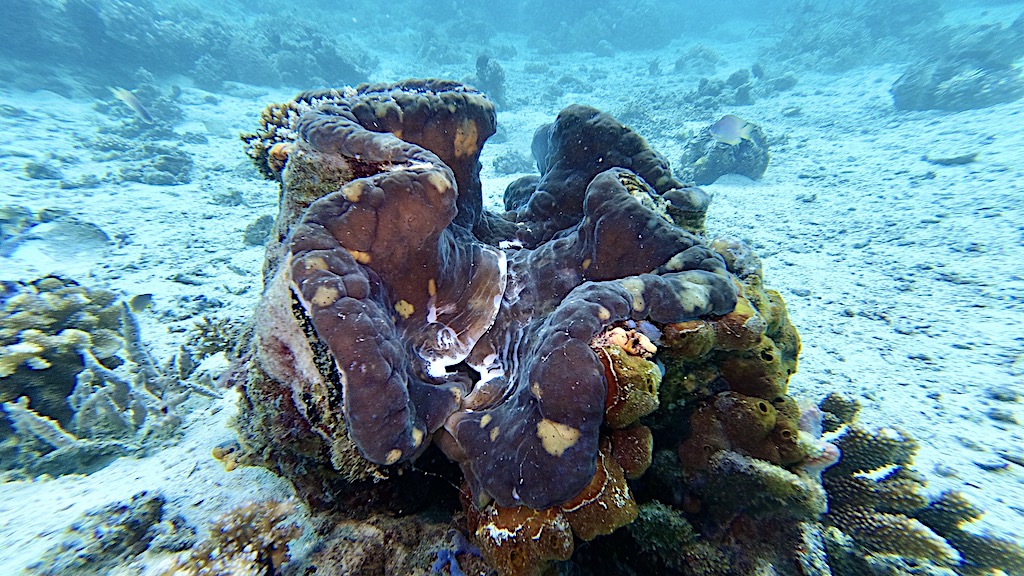 We also re-dived a couple of the above sites as night dives – both very different – one ‘muck’ (Sabang Bay) & one reef (Fantasea) both amazing not only for the life but the atmosphere with distant groups of lights from other parties visible in the distance and floating above in the water in the consistently excellent visibility – see our happy faces at the end below! 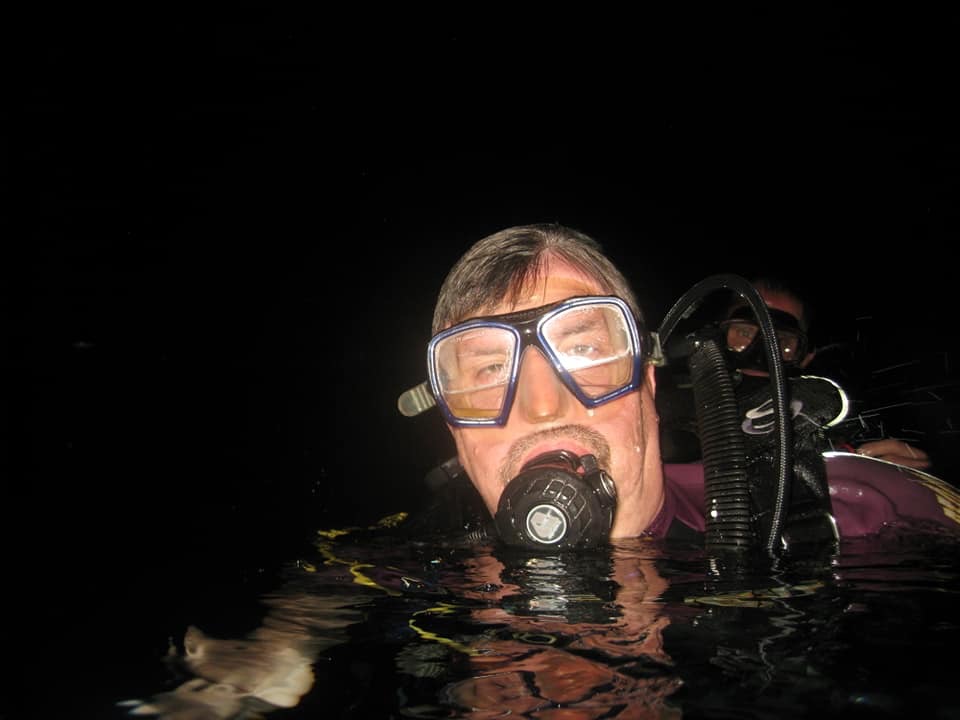 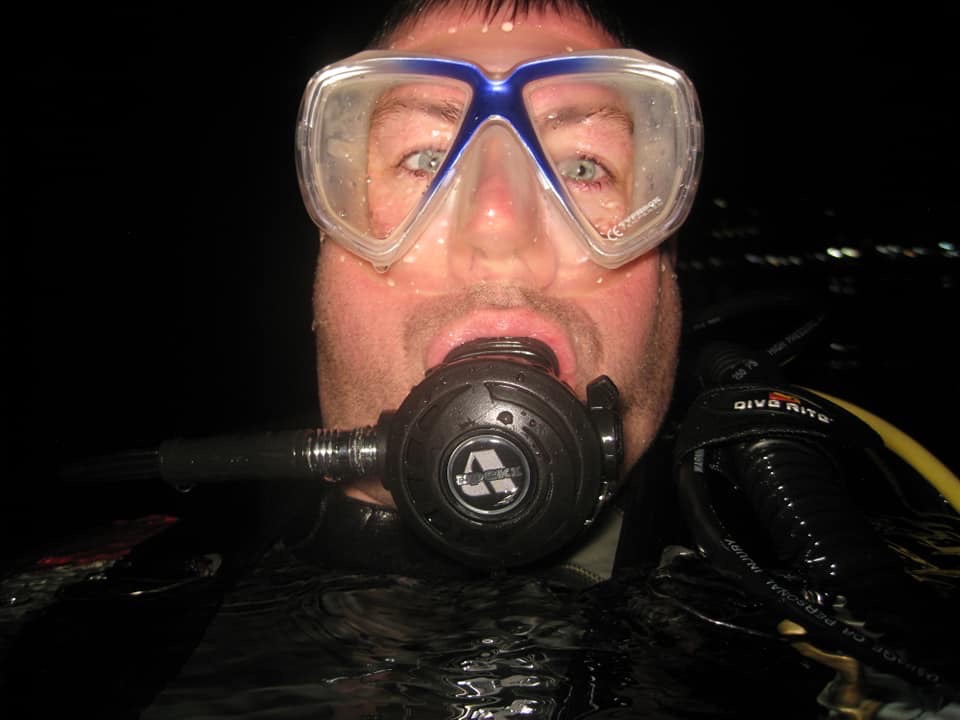 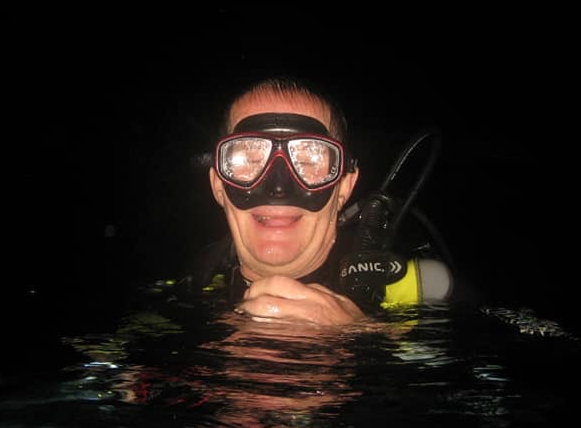 During the week a TV crew from ‘The Dive’ accompanied by Cindy Maddumma – Miss SCUBA 2015 were making a documentary & co-incidentally Geoff opted for a 3rd night dive & guess who was on it ? 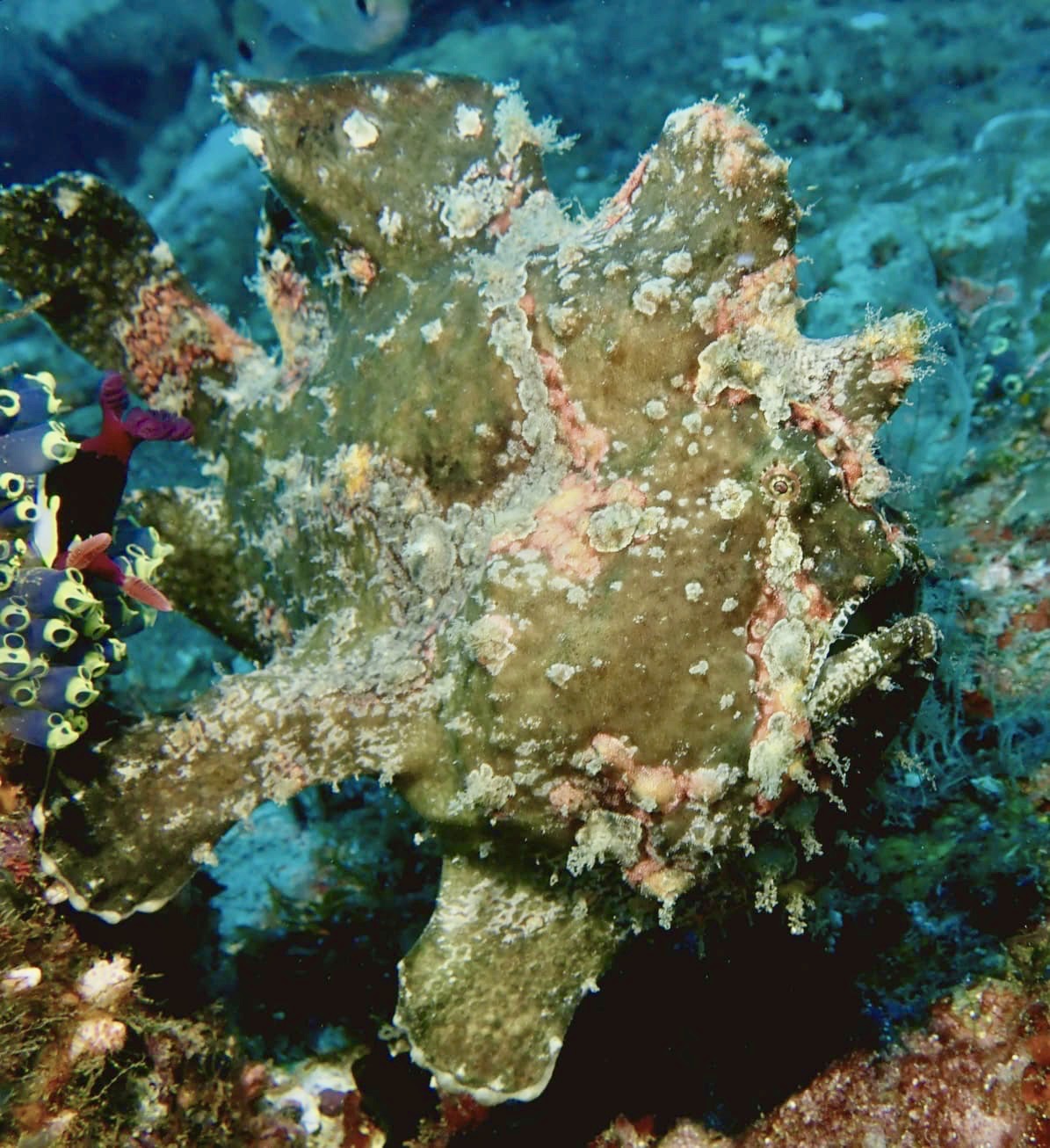 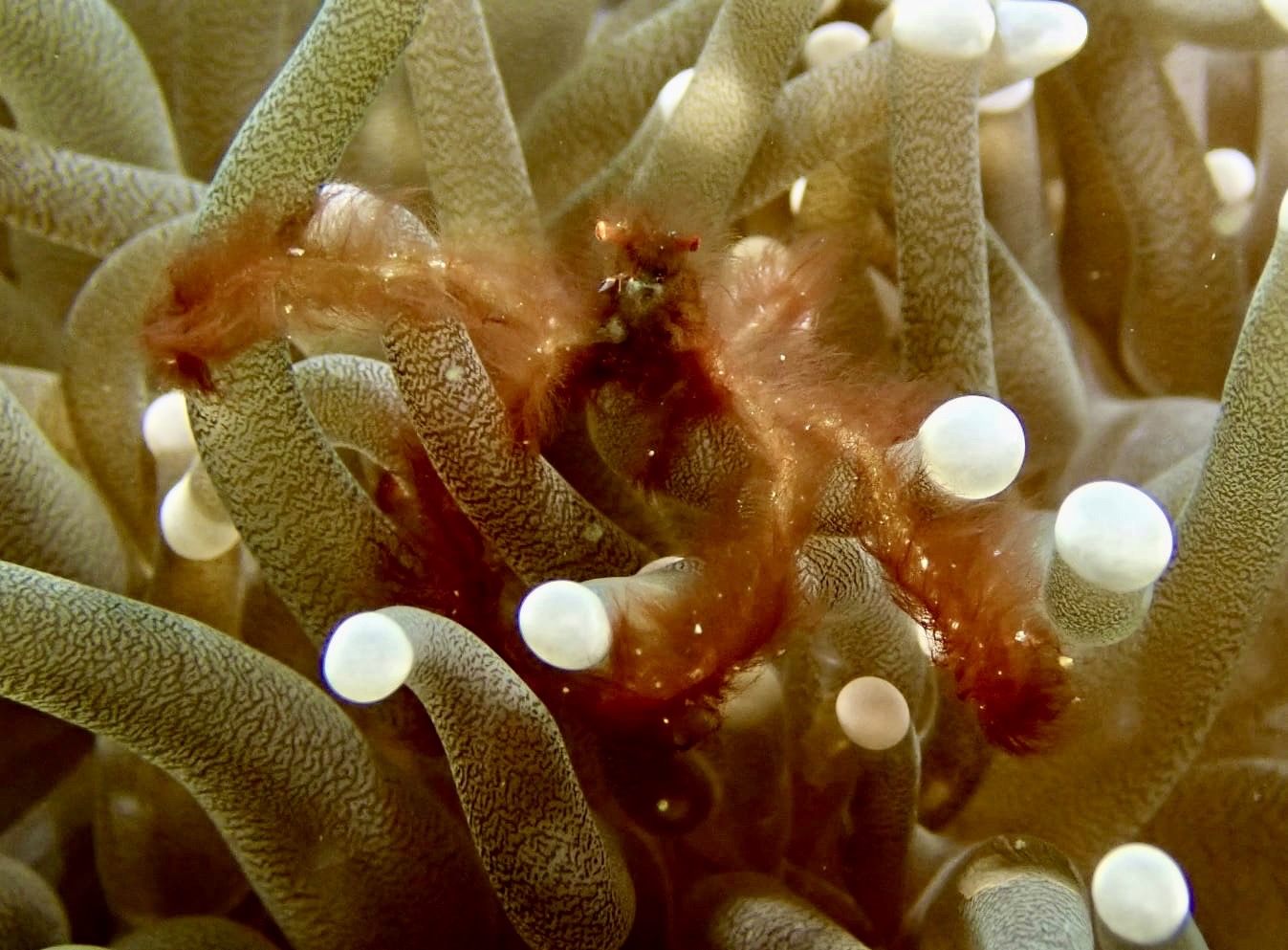 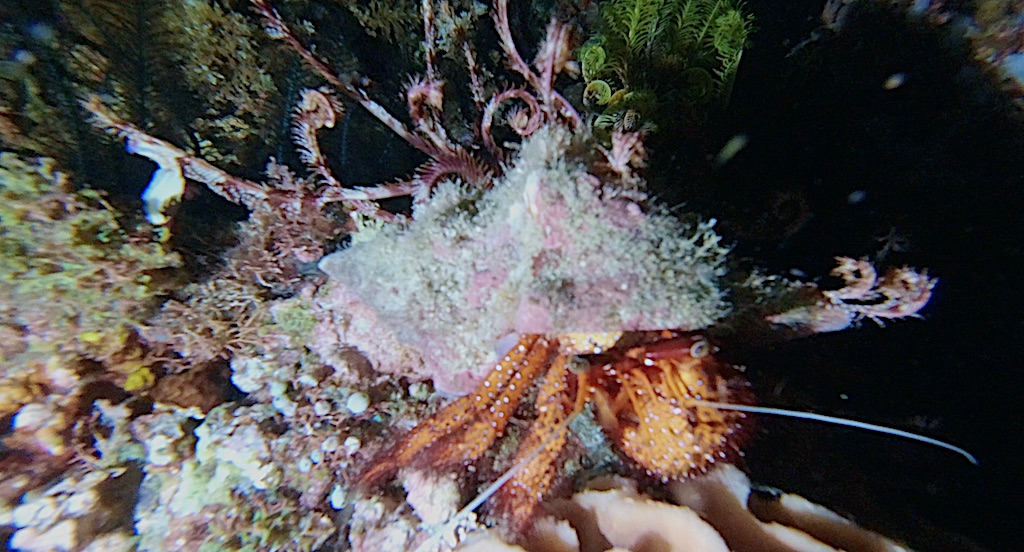 After several days of exceptional dives we ponied up some extra for a trip to Verde island opting to travel as a separate group with an extra dive for a small premium – with our own boat, chef, Captain, guide & deck-hands did we feel like royalty or what!?!

During a chat with Dave, the owner of Scandi he had mentioned if you don’t go to Verde you haven’t really experienced the best the Philippines has to offer and he was so right! 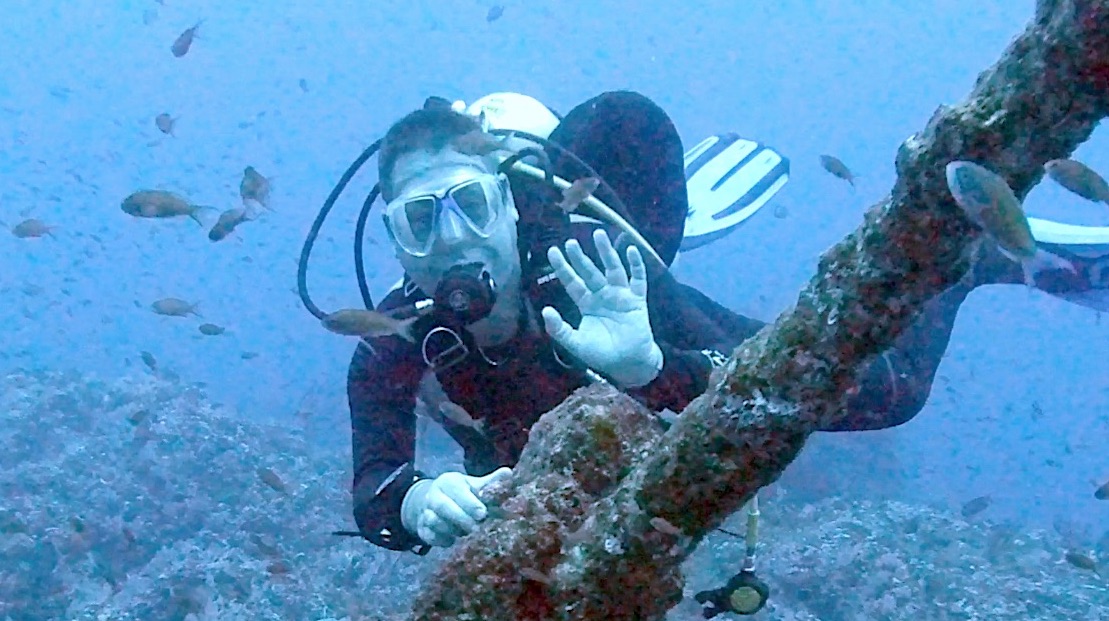 Three happy divers (again) & a remora that thought I needed a clean! 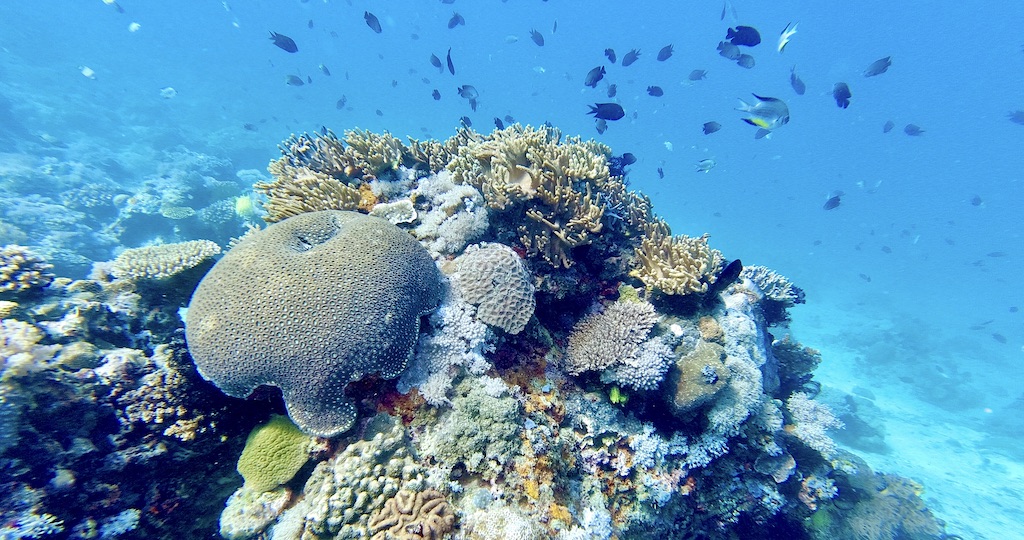 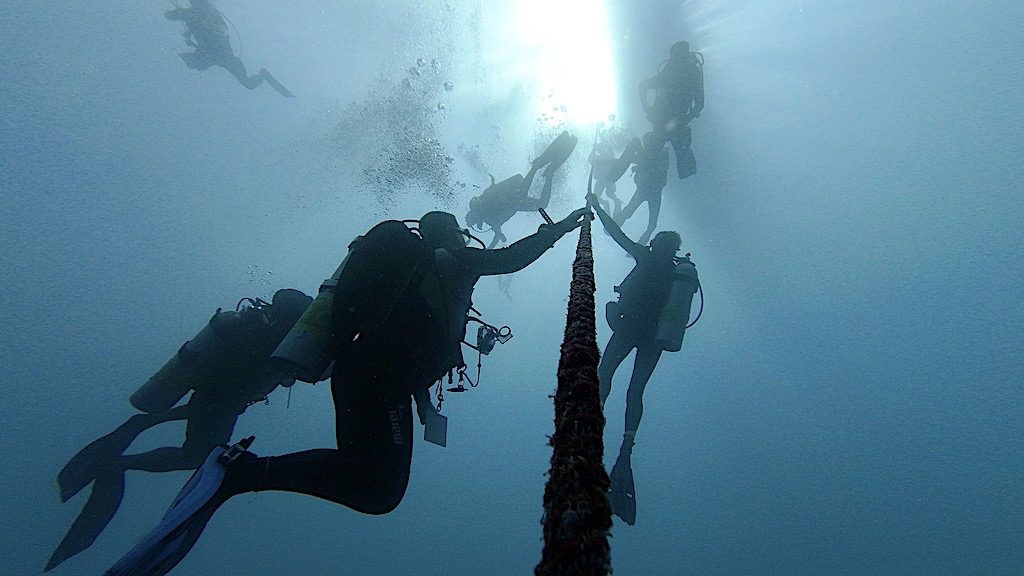 Ascending after the Alma Jane dive

On our last afternoon we all went for a walk to Sabang (10 minutes) & observed dive shop after dive shop & had t o take care not to be run over with scooters or very retro shiny taxis crammed to the gills. A bar was offering 3 beers for 100 pesos during happy hour so naturally we had to stay for more than one!
Fire eaters (a tradition apparently) were on offer on our last night but after a meal & a few beers none of us were fit for it & we retired early to prepare for the journey back next day.
My thanks to Chris & Geoff for joining me on the adventure  (I get the impression they enjoyed it), to Scandi Divers for hosting us & providing hassle free diving, good quality accommodation & a varied menu. We have to particularly thank Larry our guide for putting up with us but also General Manager Luke, owner Dave (always happy to chew the cud) & the rest of the staff – too many good people to remember!

Sundown in the bay

I have a feeling the Philippines have not heard the last of us!